If anyone is interested in 1/18 scale Zombies and civilians the Zombie Lab Kickstarter is underway. I'm excited for these so went all in, which works out to about $25 per figure including shipping anywhere. If they blow past the goal and get more unlocks, the per figure rate goes down even more for the all-ins. Boss Fight Studios has worked with this group on the sculpting and using their H.A.C.K.S. system.

While Sombies arent really my thing, I never really got into that fad. I do have to say a couple of those are cool. I'd really only be interested in the Cop "Robin", for the Uniform for customs. And Keanna for that Pepper Potts custom I've been wanting to do since Iron Man.

just pledged my support. these figures look awesome and most likely the closest I'll ever get to see a 3.75" The Walking Dead action figure line...
R

I hope it succeeds like with the DNL KS.
C

I want these so bad, Like right now. I want wave after wave of these. They all look amazing. Darkartist I am right there with you, I think this is the closest we will get to the Walking Dead in this scale.
C

I want these so bad, Like right now. I want wave after wave of these. They all look amazing. Darkartist I am right there with you, I think this is the closest we will get to the Walking Dead in this scale.

If they get all the stretch goals I think the amount per figure was under $14.50, including the shipping and ignoring the extra heads. If people only want the zombies or the civilians they could probably easily unload the other at cost. I'm excited to have both.
C

Wishing I had the money for the all in, Everyone of these look amazing.
G

26 hours left, about 10 all-ins from unlocking the two pack. This kickstarter is also promising one of the shortest to market times, which hopefully comes true.
S

Let's face it, there's nothing new from Hasbro in the 3.75" line so may as well spend my cash on a fully articulated range of original figures.

Only 14 hours to go, I can't decide if I should. Only want 3 or 4 figures. Says no duplicates though.
S

Only 14 hours to go, I can't decide if I should. Only want 3 or 4 figures. Says no duplicates though.
Click to expand...

Which one is Survivor 4 ad who do they look like?

Scroll all the way down, third pic from bottom. Stretch goal 2-pk, the guy on the right looks like Glen to me.
Last edited: Aug 20, 2017
S

Scroll all the way down, third pic from bottom. Stretch goal 2-pk, the guy on the right looks like Glen to me.
Click to expand...

I'm beyond glad that I choose the all in option. I can't wait to get these figures.
C

Has there been any updates since the kickstarter closed?

ctonra said:
Has there been any updates since the kickstarter closed?
Click to expand...

emails should be going out to soon about payments etc and the facebook page has been updating pics of the new figures that are coming.
C

I've never used kickstarter and I'm only interested in a few of these (honestly to supplement some of the medieval HACKS I plan on getting soon). My question is, at some point, will these be available individually?

Received my all in Kickstarter Zombie set.. the figures look awesome. I haven't had a chance to open everyone of them yet and will try and post pictures of them as soon as possible but these came out great. The Head sculpt look great, articulation is awesome (although fragile as well - already snapped an arm off one of the figures ), the weapons/accessories are neat (ranging from handguns, swords, baseball bats, golf clubs, axes, knifes, crowbars, pipes, mops, cell phones, computer tablets etc.. even some of the figures have a removable necktie feature)

each figure comes individually boxed with full artwork and a part of a story that tells the tale of the Zombie Invasion. the details on the figures are neat depending on the characters (the women feature details like ripped stockings, dirt and grim on their clothes, blood splatter etc. while the men feature blood splatter, ripped/ tattered clothing) even the Zombie each feature a different type of infection/ wound ranging from simple bite marks and blood splatter to full guts exposed, bones etc. one of the zombies even features a headsculpt that looks like a sword cut it off at an angle and you can see the brains exposed on the inside.

each 4" figure sports multiple points of articulation (ball jointed heads, torso articulation as well as articulation in the shoulders, elbows, wrists, thighs, knees and ankles and waist) making these perfect to pair with the modern G.I. Joe line of action figures.

Received mine as well. They are really well done. Look forward to setting them up this weekend.

set up a quick display of the Zombie Labs Kickstarter figures last night on a custom display base. this is the "TWD Glenn" headsculpt that came with the all in package backers. 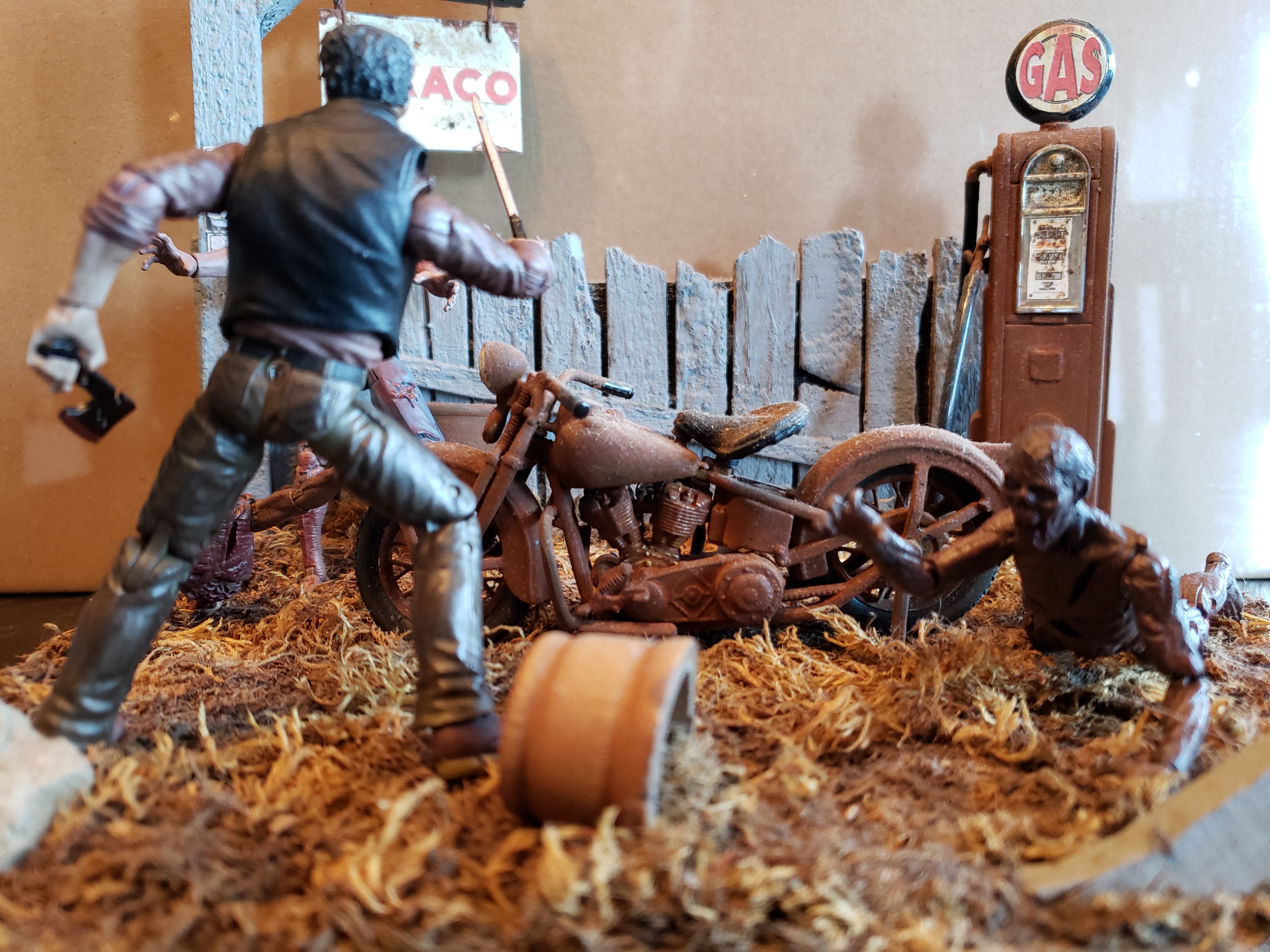 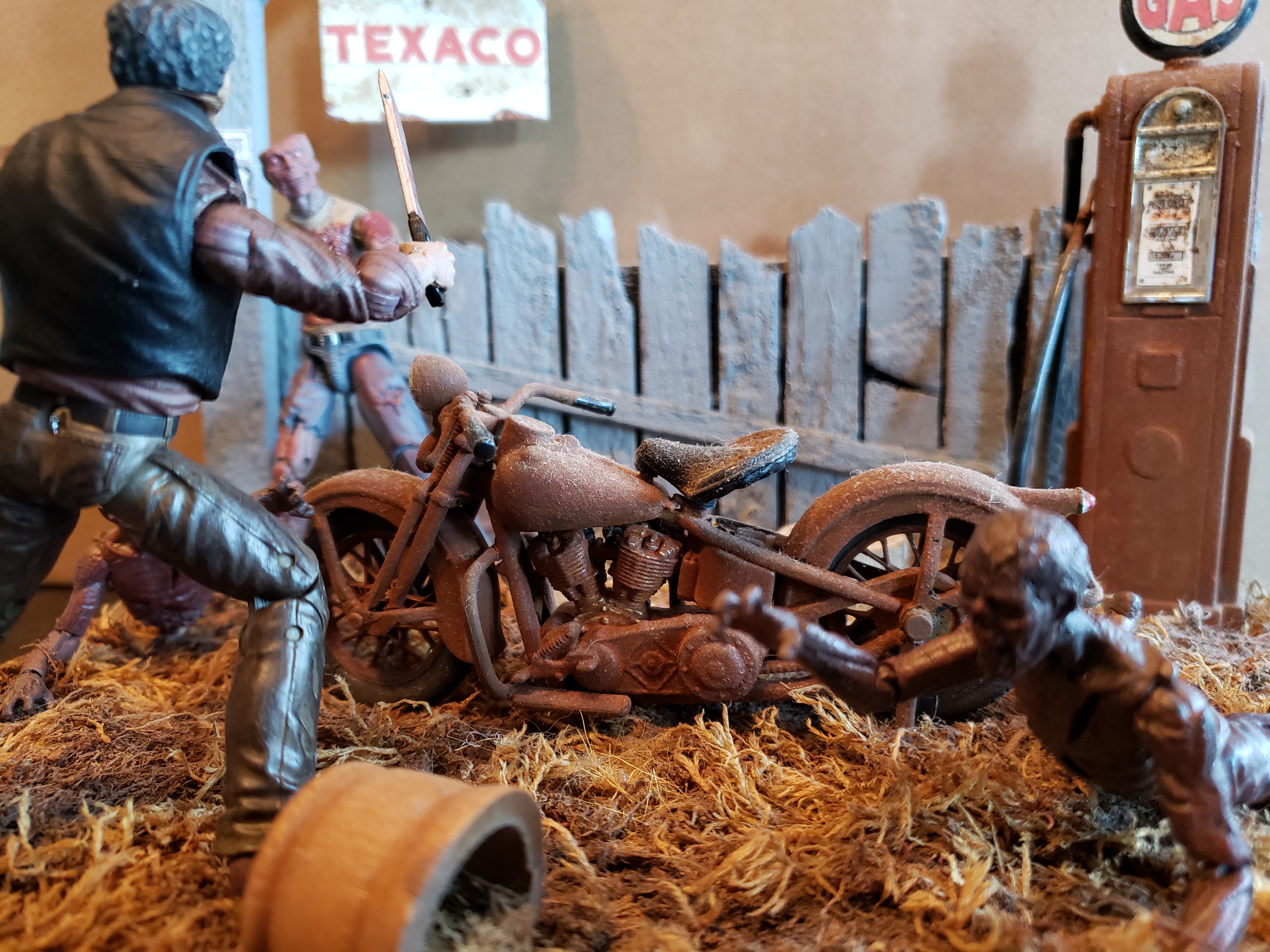 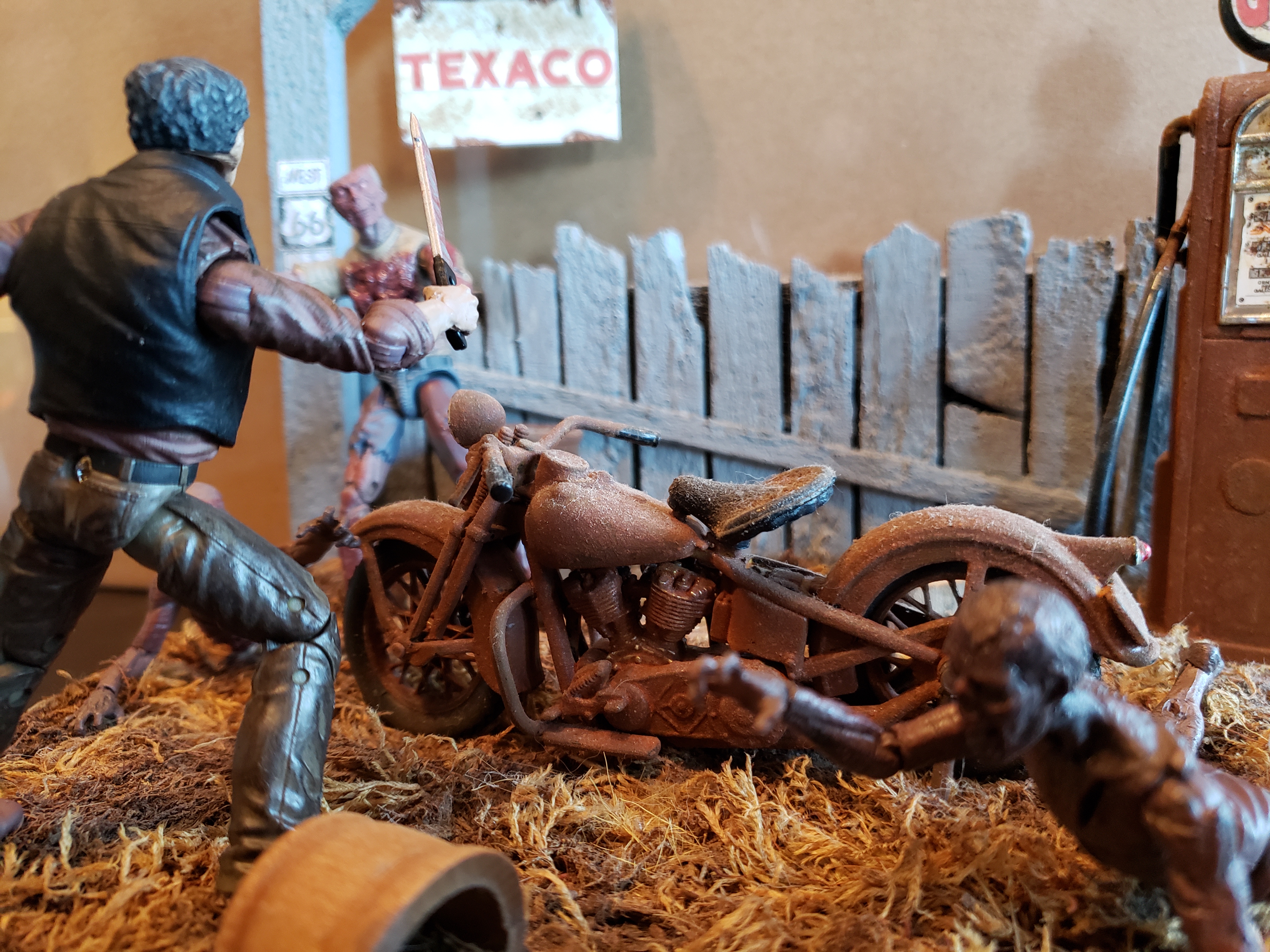 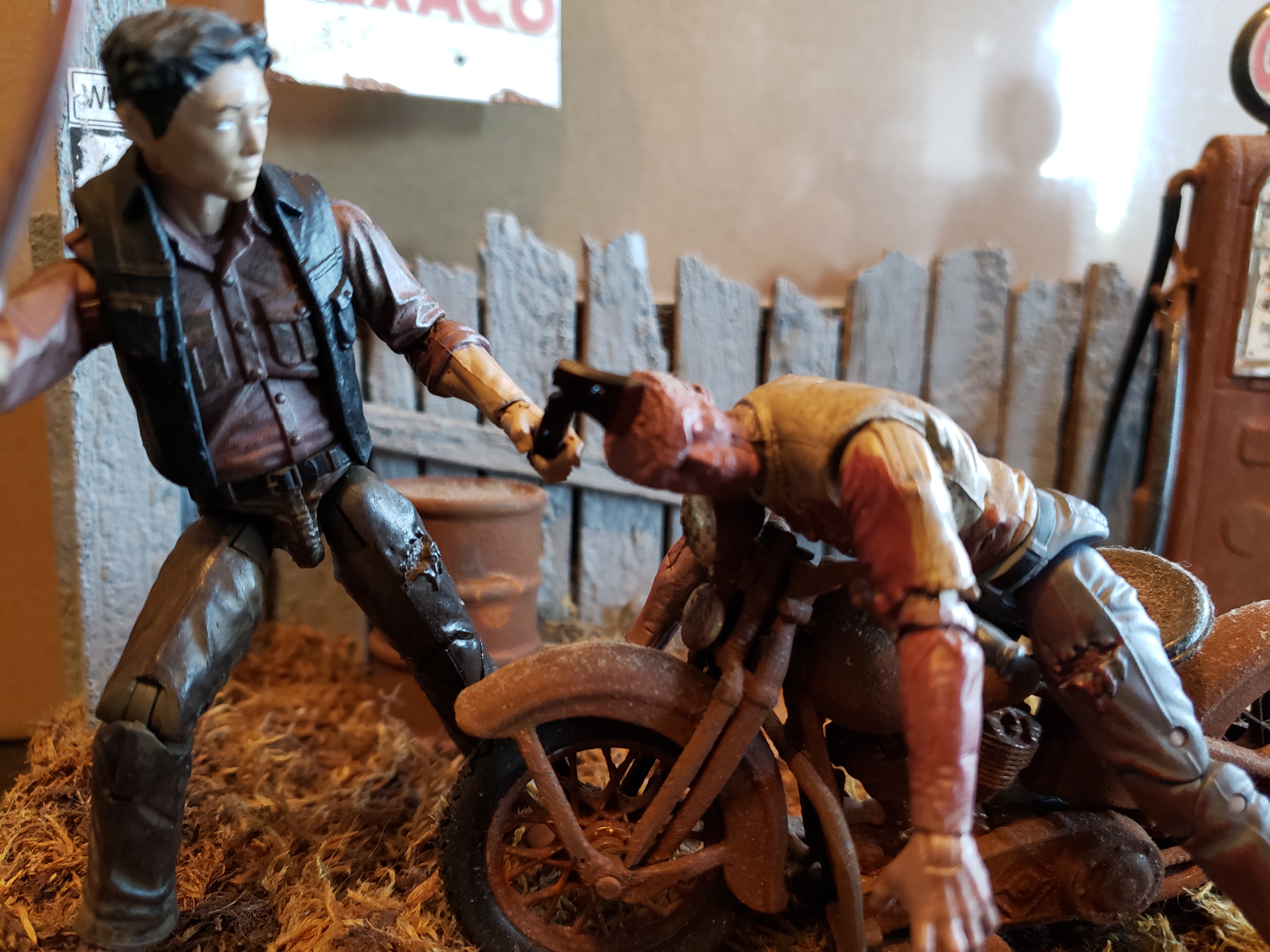 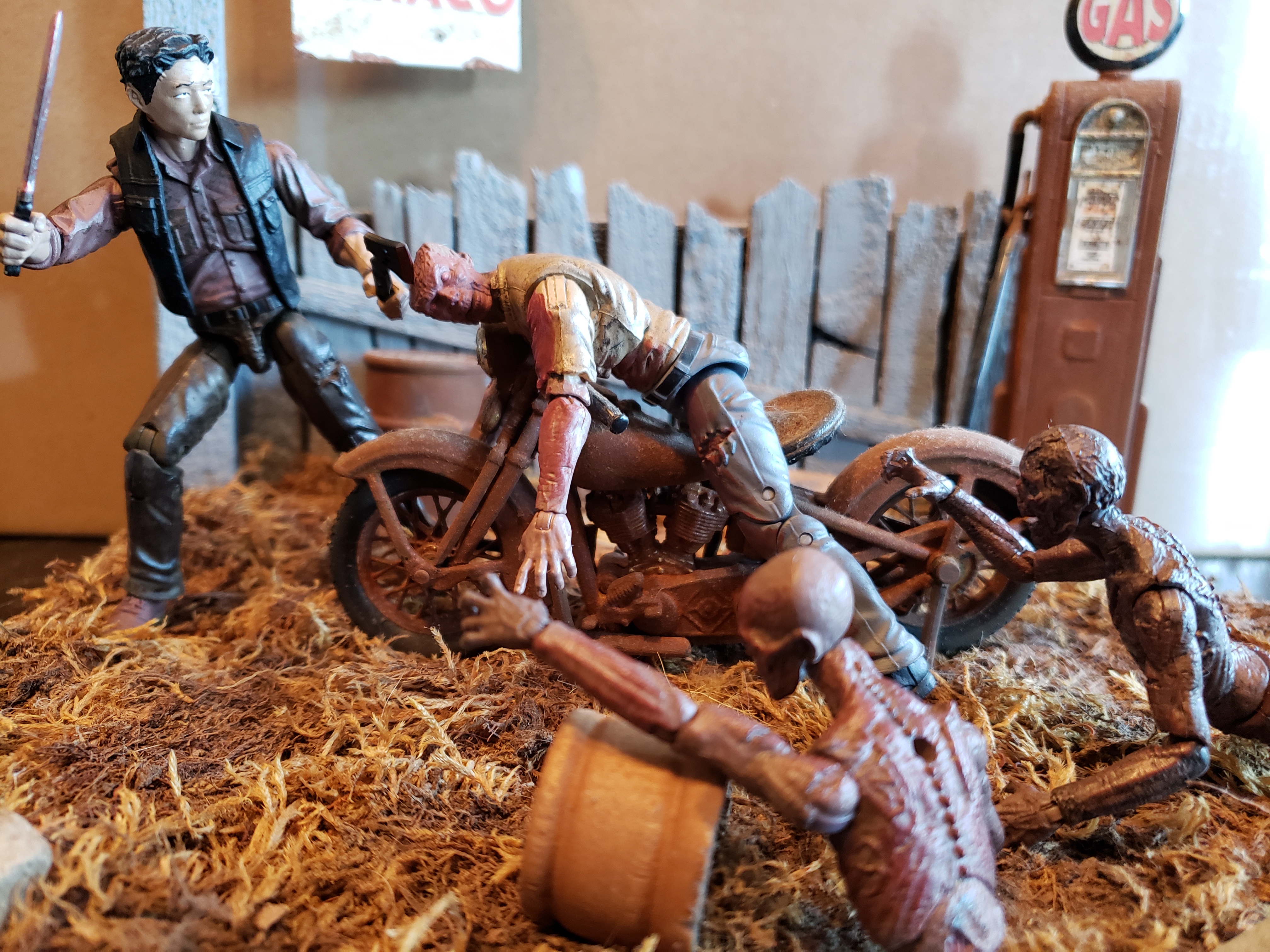 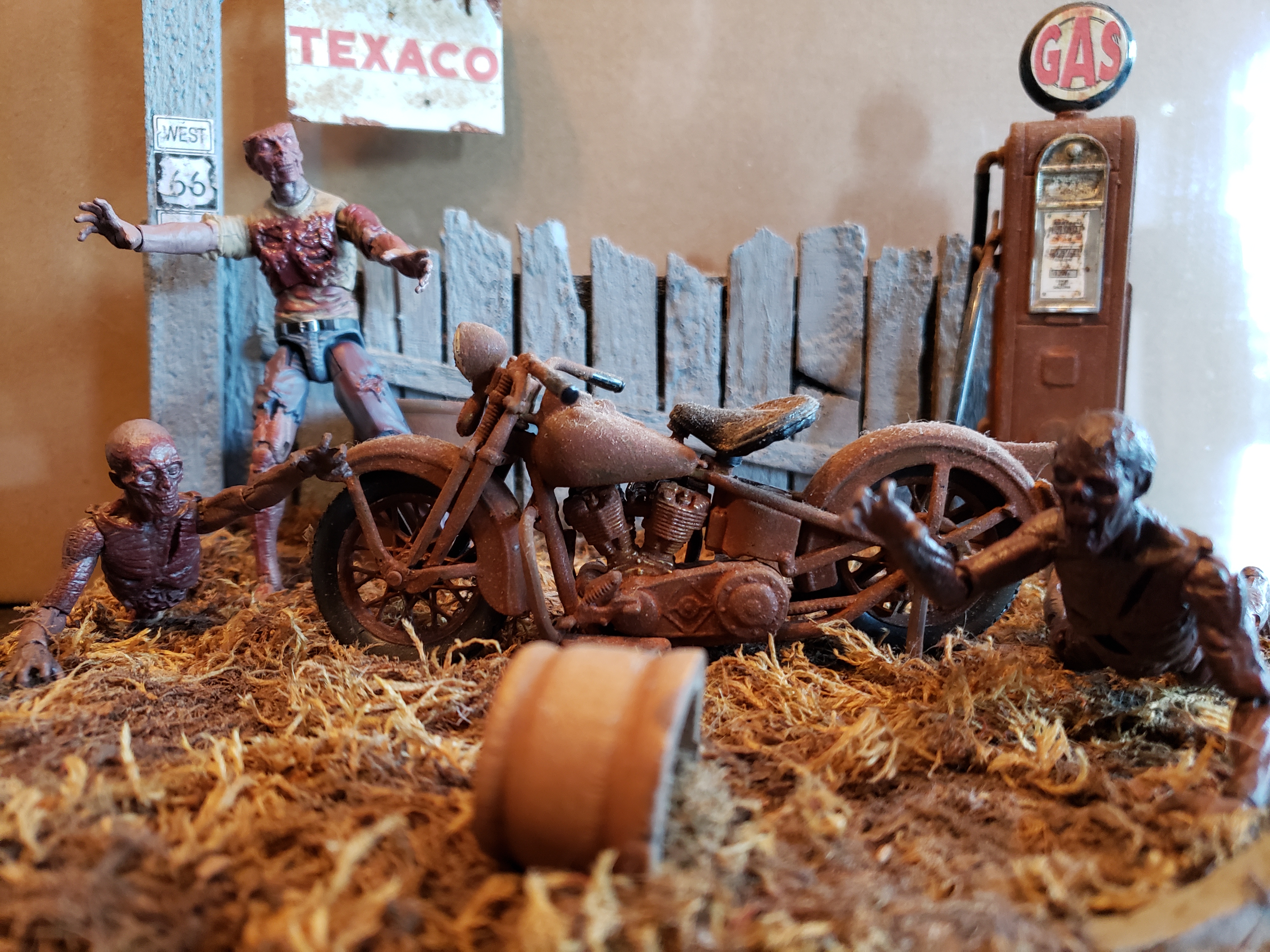 I got a “ready to ship” email for my add ons. I doubt I’ll get them as fast as the first shipment, but still, I’m excited for more suits and cops.
You must log in or register to reply here.
Share:
Facebook Twitter Pinterest Email Link
Top