FOR GOD SAKE, IT's JUST ANOTHER YODA ACTION FIGURE

I can't wait to see GH-like pictures of the other eight figures.

Here is the cardback

You can also notice that C-3PO is the original version, not the removable limbs verison.Thanks god

I'm curious to see what they do with R2-D2 since this was the only ROTJ R2 cardback... 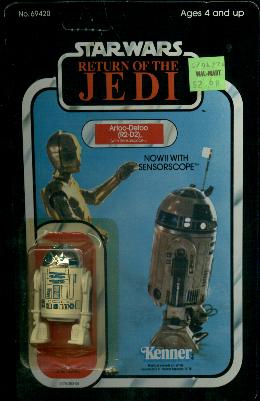 besides votc han this yoda is the one i want the most.


YODA_BOI said:
besides votc han this yoda is the one i want the most.
Click to expand...

Yes, Han and Yoda are my pics, and I think the Ben.
W

Vintage Figure Spotlight: Yoda from The Empire Strikes Back

The Empire Strikes Back introduced us to Yoda, the nine-hundred-year-old Jedi Master that trained two of the most important Jedi in recent history, Obi-Wan Kenobi and Luke Skywalker. In Empire, Luke was guided to Dagobah by a vision of his former mentor Obi-Wan Kenobi and stumbled upon Yoda by accident. After revealing himself as Yoda, the Jedi Master began Luke’s training. This vintage Yoda reminds us of those scenes in which the elfin Jedi Master pushes Luke to brave more physical and mental challenges than he had ever faced before in an effort to mold the reckless youth into a Jedi.

The “vintage” Yoda has some exciting new features that distinguish it from the original. The original Yoda came with a u-shaped snake that only worked to hang around his neck; the new Yoda comes with a u-shaped snake that can be coiled around his neck, cane, or arm. In addition, the new Yoda is the first to have leg articulation, which is a difficult design feature to accomplish on such a small figure.

Yoda has 10 points of articulation, including a ball-jointed head/neck and both shoulders. He has angled bicep articulation and standard articulation at the wrists, waist, and legs. Sculpted holding his cane (also known as a gimmer stick), Yoda wears his Dagobah necklace and comes with a soft goods skirt and removable soft goods cloak.

As explained in the Obi-Wan Kenobi Feature (May 20, 2004), the back of the vintage Yoda card is different from the “12-back” originals. For legal reasons, Hasbro cannot cross-sell old figures on current products, nor can we display old promotional offers that were on some originals. However, the new cross-sell harkens back to the 70’s with its accent colour (matching the front) and displays pictures of the original packages for reference.

Personally, I'm not phased too much about the ROTJ Artoo cardback, but yeah I agree it's not impresseive. I'm more concerned about Hasbro releasing him with the accurate sensorscope this time as opposed to the periscope. I would be ticked about releasing him w/o any feature at all!

A new forum poll has been started here, so check it out and add our opinions on the VOTC Yoda.

GH has posted a couple images of Yoda:

Yoda Carded - Close up of the new VOTC Yoda carded not in clamshell, looks great!

Close up of Bubble - The Hulk is back! Yoda looks like his ready to crush the empire all by himself or at least the rest of the package

now is it just me or does the new yoda head look like the first saga yodas head just painted different.

Kenner did a much better job (see POTF II/ Flashback Yoda).
Both, the OTC Yoda and this VOTC Yoda are off. One can only wait for the final pictures and a couple of reviews of this figure before making a final judgement.

After the BEAUTIFUL job Hasbro did with Yoda's eyes back in the POTF2 days, they sure seem to be having a hard time even getting both eyes looking the same direction these days.

Yoda's pupils are much smaller on the new VOTC Yoda where as the previous versions of Yoda all had larger pupils. I'm sure Hasbro can't get everything right all the time

And? People other then you might actually want to see different views of the figure carded.

I LOVE THIS CARD! Love it!

GH has more carded images up:

I was just copying you. If a mod can do it, then so can I. Ironic, huh?

I hope someone is keeping score here.

The SSG has coverage of VOTC Yoda.

Out of the VOTC collection, yoda seems to have the most "vintage" appeal because of the added accessory of the snake. While other VOTC figures have better sculpts, yoda takes the cake for most vintage looking.

While the card itself is pretty neat... all vintagey feel and everything, but to me the sculpt just looks like "Cabbage Patch Yoda". Maybe he'll look better in person. That was what happened with the McQuarrie Concept Stormtrooper for me...
D

I don't like the sculpt, but hey, if that's Hasbro's best, I'll take it.

I still can't decide if I like this figure or not. Somehow the POTF II head is still superior, IMO.

Looks like Yoda came down with something...ye god better keep the figure sealed not to let it out plus it looks like he has a bruised eye which he possibly got when he got into a fight with tree and lost perhaps.
D

Someone needs a Pepto Bismal... 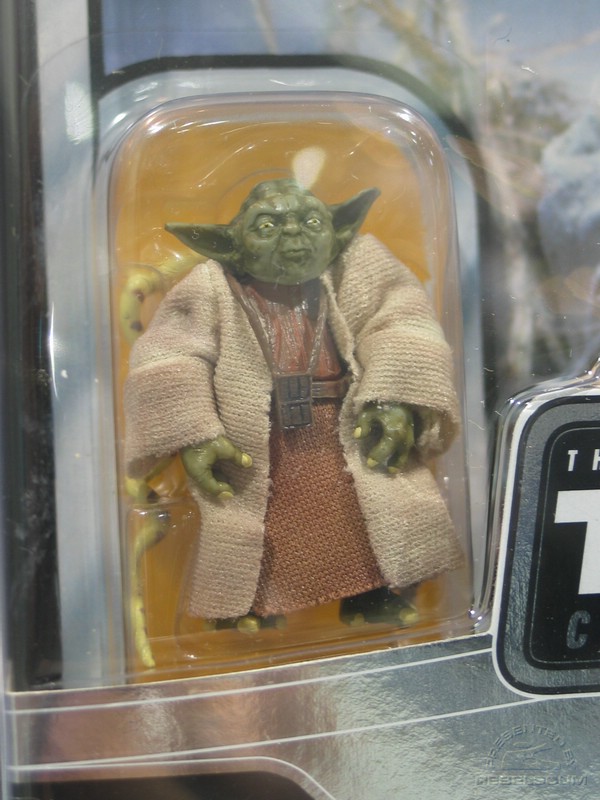 I actually got this figure today and he rocks.....

Once you see him up close in hand he is a good likeness. I like the cloth cloak(much better than the Vintage Ben). The snake is also better than the original orange one (and it's bendable).
All in all not a bad figure much better i'd say than the upcoming Vintage C-3PO anyday....
Y

i really like this figure, but i would have loved it more if he came with 2 colored snakes(orange,brown),pots and pans,and a lightsaber hilt.

I think those pics pretty much decided for me to pass. I'm not super-thrilled about the OTC version either (the colors are wrong and he's a little too thin). But, I'd rather that one than this.

Lasted assortments of the Vintage Original Trilogy Collection shipping to retail outlets across American have two new surprises in them. Cases shipped to a Toys “R” Us in Greenwood, IN included the VOTC Darth Vader and Yoda figures. The others can’t be too far behind.

Hhhmmm... start your hunting for these figures you must! Where are the other 2 are I wonder? Hmmmm.
D

Thank you REBELSCUM for posting this useful information. I have yet to see the first wave though...
B

I thought it was helpful! Now I can drive down to Greenwood and see if there's any left to snag!

The Yoda in the photos look like Jackie Mason!

Glad it helped you BigDumbWookiee, drive fast...you don't want to miss out!