The new VOTC Yoda comes in the ESB wave which also features 4 other newly sculpted figures - Darth Vader, Lando Calrissian and C-3po. Here's some details on the Yoda figure:

Vintage Figure Spotlight: Yoda from The Empire Strikes Back

The Empire Strikes Back introduced us to Yoda, the nine-hundred-year-old Jedi Master that trained two of the most important Jedi in recent history, Obi-Wan Kenobi and Luke Skywalker. In Empire, Luke was guided to Dagobah by a vision of his former mentor Obi-Wan Kenobi and stumbled upon Yoda by accident. After revealing himself as Yoda, the Jedi Master began Luke’s training. This vintage Yoda reminds us of those scenes in which the elfin Jedi Master pushes Luke to brave more physical and mental challenges than he had ever faced before in an effort to mold the reckless youth into a Jedi.

The “vintage” Yoda has some exciting new features that distinguish it from the original. The original Yoda came with a u-shaped snake that only worked to hang around his neck; the new Yoda comes with a u-shaped snake that can be coiled around his neck, cane, or arm. In addition, the new Yoda is the first to have leg articulation, which is a difficult design feature to accomplish on such a small figure.

Yoda has 10 points of articulation, including a ball-jointed head/neck and both shoulders. He has angled bicep articulation and standard articulation at the wrists, waist, and legs. Sculpted holding his cane (also known as a gimmer stick), Yoda wears his Dagobah necklace and comes with a soft goods skirt and removable soft goods cloak.

As explained in the Obi-Wan Kenobi Feature (May 20, 2004), the back of the vintage Yoda card is different from the “12-back” originals. For legal reasons, Hasbro cannot cross-sell old figures on current products, nor can we display old promotional offers that were on some originals. However, the new cross-sell harkens back to the 70’s with its accent colour (matching the front) and displays pictures of the original packages for reference.

Whats everyone think of the VOTC Yoda figure? Use of cloth goods for the skirt and cloak? Are you going to buy the VOTC Yoda or you just buying the basic version? Talk about the new VOTC Yoda here.
J

They look nice!!!! I wanna get the Yoda now... dang I'm straying away from just getting the Vaders, and the Stormtroopers...
S

He looks cool but I prefer the sculpt on the Dagobah version.

Still a nice figure though and will be made even better with 2 legs.
W

Right again Steve, man I find myself agreeing with a lot of your comments on this forum, scary! Anyway, I might be the first to say this but THE VOTC YODA LOOKS LIKE CRAP. Either his head is too small or the body is too big but he doesn't look right. Don't beleive me? Just pull up any ESB pic if Yoda and put it next to the VOTC version, you'll see. The all plastic version looks porportioned correctly. The cloth on the VOTC Yoda looks too puffy. I just hope I'm wrong when it actually cames out.
D

Yoda's eyes look a bit screwed up...they don't capture his look like in the ESB. The robe looks a bit too clean and proper as well...could look a bit tattered. The snake looks cool!
D

I do like both of them but for some reason prefer the Dagobah version. The thing that I like most about the VOTC version is that it FINALLY comes with a snake. I really liked the snake from the early 80's Yoda for some reason. A nice addition to the VOTC one.

So, most likely I will end up with both of them in my collection.
R

eh, I'll get him if I see him. Otherwise the OTC one will suit me fine.


YODA_BOI said:
this could be the coolest yoda to date.
Click to expand...

Since we haven't really got a great OT version of Yoda yet it's no wonder the new Yoda is pretty good. The cloth and snake really add to this figure

I plan on using this one in a scene with the handstand Luke, and the other one inside the backpack, so count me in for one.

For some reason both seem off in terms of likeness. They POTF II versions looked a lot more like Yoda, IMO.

I agree. The likeness on Yoda figures just hasn't been great. POTF2 seems the best of the modern era as far as an accurate Yoda likeness.

Honestly, the TPM Yoda looked most like the puppet as far as acuracy.

AOTC Yodas looked horrible and nothing like Yoda (imo).

They need to dump the freakin' dark, spinach green color already. Did Hasbro even watch ESB?

I'm begining to think they're color-blind what with this, Anakin's light blonde hair and blue super-battle droids.

Something must be really brewing in that root-leaf growing by his house!

I think the Dagobah version looks much better, the head is too small on this one.
B

The original vintage Yoda still has the best sculpt of any Yoda figure...
P

I agree the head is too small. What is it with Hasbro and scale? The first Greedo had a shrunken head, the first Tantive IV defender was to scale for a 5" line not a 3 3/4" line and there are others if I think hard enough!
D

Agreed. Who'd have thought that after twenty plus years it'd still be something that cannot be beat?

While I love the vintage figures (I've been with them since the 1977 Early Bird days), the vintage Yoda sculpt is exactly what it is - an early 1980's sculpt.

Charm and nostalgia - you bet! Detail and accuracy - not exactly.

If something like this were released today, these boards would be roaring with a combination of laughter and outrage. 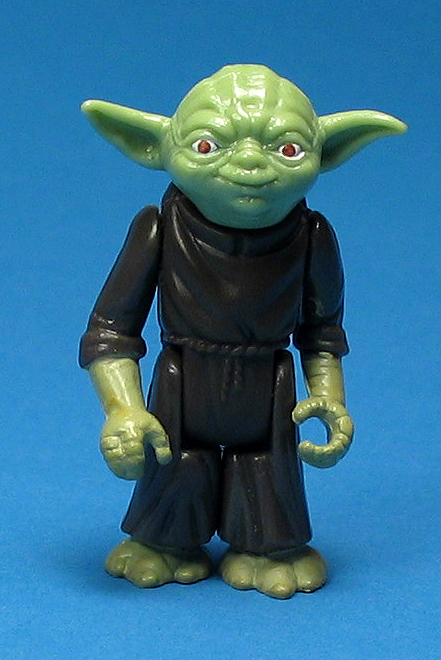 That's without his soft goods cloak. Put in on and you get this: 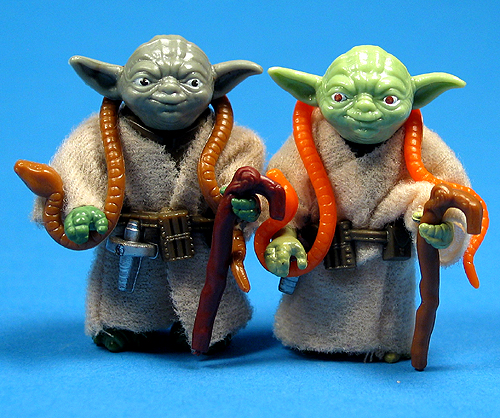 It looks disgusting and unreal.


Durge said:
That's without his soft goods cloak. Put in on and you get this:

The one on the left is the most accurate one ever made. The skin tone is exact. The one on the right is second.
Click to expand...

We're talking about the sculpt. Soft goods are not sculpted. Even so, it still looks like the '80's figure that it is.

The vintage version is very cartoony. It gives the animated version a run for it's money:

The new VOTC Yoda is far from the cartoon look of the old vintage version. Can't wait for Yoda.
O The character in the vintage Yoda is great (in fact, I think he's the only vintage figure that I still own), but it's not accurate. The new sculpt is nice, but still a little off. Someone elsewhere here (sorry, don't remember who) mentioned that Yoda doesn't have enough black in his eyes, that his pupils are too small. Bigger ones give him a "cuter" look that recent paintjobs don't have. It was a pretty good point.

The cloth looks outstanding.
The head is a tad too small. His color is off (same goes for any prior the Ep 1 Yoda). If his head would be a bit more like the POTF II version this would be irresistable. I will wait until the final pics leak through until I make my judgement.
O

For what it's worth, I think this one has the most detailed and accurate head sculpt thus far... 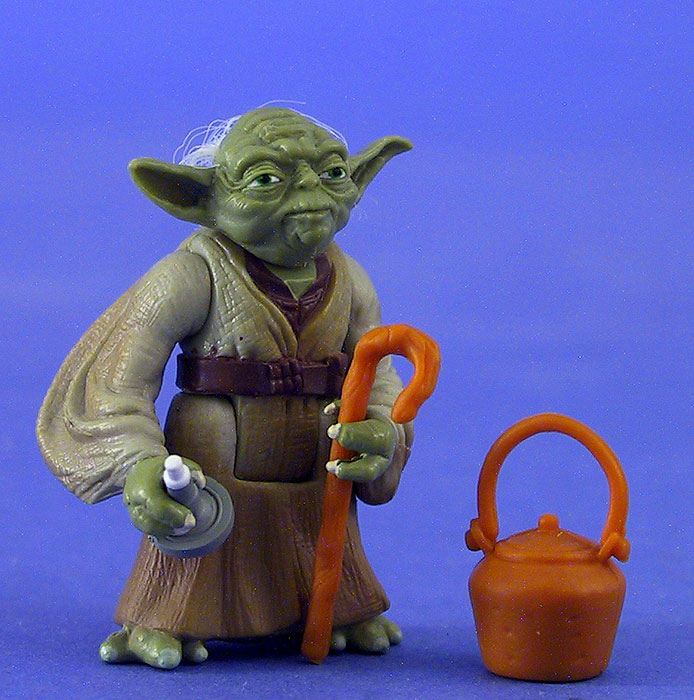 I agree with you, Glitch. I would have purchased Steam Pot Yoda if not for that stupid looking rooted hair.


infallible said:
I agree with you, Glitch. I would have purchased Steam Pot Yoda if not for that stupid looking rooted hair.
Click to expand...

The hair was either hit or miss.

I really looked around for a figure with VERY little hair before I opened one, and I'm quite happy with it. The later ones had far less hair than those that were released first. When it was done well, it looks MUCH better than the attempts at painting the hair we have seen.

On the other hand, I have seen some that make him look like a damn hippie!

That said, the head sculpt is pretty remarkable considering the size. The ones we are seeing these days just look "muddy" to me. They lack the detailed wrinkles, skin texture, and subtle form of this sculpt.

From the cargo bay looks like Yoda will be out on July 26 not long to go now!

Totally agree with you.

I think it sucks that Hasbro rarely goes a different way:

All AOTC Obi Wans and Anakins suffer from the same problems:

Obi Wan's face is to narrow, his hairdo is off (both color and the way it falls), wrong coloured "Jedi shirt"

Anakin (only one really normal facial expression, wrong haircolor, no painted lips)
Mace:all had weird facial expressions except for the Council Scene version, which is also in a way a step backwards from the Sneek Peak version

Yoda: All AOTC versions have crappy skin color (looks like spinach). The Christmas Yoda and the two upcomming Yodas are also a step backward from the two POTF II versions, IMO

Clonetroopers and Super Battle Droids: Hasbro scanned the marquettes ILM sculpted before the CGI was created. Of course changes were made meaning the scanned stuff didn't look accurate. Instead of redoing them they kept the basic scan and just reposed them with some minor tweaking here and there.
Just take a look at the Clones that were released before we got the SA Clone: all are too thing- their armor isn't bulky enough. Still, Hasbro gave us a previous version, a Commander, a pilot and dozens of three packs.

The Super Battle Droid is also based on the scan, which looked somewhat different.


You see, Hasbro stays with their bad habits. I don't think we will ever see another Yoda as accurate as the POTF II version's likeness was.

I agree 100%. You think you would strive to improve over time, wouldn't you? Another thing that ticks me off is the "translucent" plastic they often use for flesh tones (TRU four pack AT-ST Driver, Hoth Leia). I realize it's nothing more than a cost cutting move, but those sets need all they help they can get.

Anyway, when I say the new Yoda sculpts look "muddy," THIS is what I am referring to.

They just lack the detail and character of the POTF 2 sculpt shown above. Horrid paint application aside, it looks as though they went over the whole thing with some type of thick coating to obscure all of the detail. Look at the top of his head. Where are the ridges? I hope the production VOTC Yoda looks better than this.

Oh well, it looks as though the ol' Dremmel tool is going to get some use.

Can't wait to get it this should be good.

Hasbro can't go wrong with a OT Yoda figure espicially one that comes with a snake (and possibly seperate legs)!
D

I've seen/inspected the actual puppet in it's small round cylinder case at the Magic of the Myth exhibit. I know first hand what this looks like, and I can say with all honesty that the new figure is good, but it ain't Yoda. It really looks nothing like him.

Hasbro really isn't going to get better then the head they've used on the new vintage Yoda, it looks fine to me. The best Yoda yet.

One day there will be a better yoda head (hopefully