and the driverside-fender from #2 added as well. A few minor "adjustment" on the doors are needed to level up everything fine and smooth, but a simple bending-in/out-job should do. I just will wait until all panels, the front and rear mask are attached

and as this is the last issue for the next couple of weeks, due vacation and becaues I am up-to-date with the EM UK-shops offerings right now , I couldn´t resist any longer to do a testfit with the chasis and I really, really, REALLY love it.... And man, this baby is becoming REAL heavy.

Thats it again, now off to Croatia with the Mrs. tomorrow

This is a spectacular thing of beauty!

Still on vacation, but I just HAD to order an new custom upgrade. Mr. Mike Lane, who is also offering the awesome interior carpets, is now offering a upgrade set for the luggage compartment. This will include a flocked insert for the inner side of the hood, a foam insert including custom repair tools and an removeable top inlay. Pics will follow as soon as I get back home, and the set has arrived

Back from Croatia, and as expected, a envelope fom UK rested in the PObox
Mike Lane´s custom Luggage Compartment upgrade set arrived

The part under the X-frame is a sticker, like the interior-carpets. Although the froam-part and the tools are not exactly accurate to a real DMC, I think its still a nice addition.
Still need to paint the tools, as well as the the lower part of the hydraulic struts

Little update as I had a few minutes left today

The last body-panel attached, there is a minor problem with the door-cab on the passenger side. I hope this solves itself when the body and the bottom come together, as I think this might happen due some minor warping of the mainframe. Either that or the door itseld needs some adjustments

Itsa me again, with yet another small update, only one week later

Actually, I ordered up to #89 from EM-shop this time, but since my beginning of this build back in Jan., this is the first time where the order is messed up a little. No big deals, but unexpected indeed.
First, the main inner roof cover in #86 has a little color scratched off the plastic, still in protecting blister. Qualitycontrol fail !
Second, #87, supplies a wrong string of LED´s. The ones packed, are a pair of YELLOW LED´s. These are meant to be mounted through the roof to light the rear Flux-band and so these should be BLUE. Thanks again, Qualitycontrol. Anyway, I already learned that the correct string, will be supplied later with #90
Third, as mentioned I ordered 5 issues, but I only recieved 4.

"Dear customer
Due some unexpected logistic-error, issue #88 is currently out-of-stock...
Click to expand...

Don´t know if by error or to compensate that, but I recieved this for free instead

The above mentioned quality-failure can be seen on the left arm ( right, when mounted inside ) In the end, no big deal. I will color this when attached to the inside body
Painted the "mounting panel" where all the switches go, silver and black for two little details.

The sunvisors are articulated, but the way they are mounted, makes them pretty loose and wobbly. As for me no big deal, as I have no plans to keep them moving up and down, I will permanently glue them later when this is mounted to the inside

I might be wrong, but I think there should also go a few extra cables between the switches. I need to check for some reference pictures for that.

And this is where the ,5 update stops

As explained above, the wrong colored LED string should be mounted now, followed by attaching the assembly to the body-inside

As mentioned above, issue #87 had a wrong colored LED-string with yellow bulps. Its meant to light the rear flux-bands to lightup blue. Buuuuuuuut the replacement LEDs delivered now are white, so I simply colored them with a blue marker as I don´t want to order and wait for yet another replacement

that tube-assembly will be added to the motor with the next issue, wich will also be a MAJOR-step issue... marriage of bottom and body followed by adding the rear and front mask

can´t await to place my next order as I am soooo exited to check all the lightning. Only holdback would be, I still need to wait for my custom flux-capacitor and CID-display, as I surely don´t want to rip apart bottom and body again, once assembled

Well, I finaly recieved the upgraded devices from a Facebook-Mod-Group.

First, two before shots of the EM supplied versions. The Flux is lacking some serious details and is only lighted by a single LED in the middle of the wrong-shaped Y
While the look of the CID seems to be OK, again the two backlight LED´s makes it look weird. ( the colored dots come from an previous "sticker upgrade" )

Heres what the UPGRADE set included

With the Flux-mod added, I am finaly able to continue on my little pile of stacking issues, and this issue is a major step one. Marriage of the bottom with the body

and here we are, after fiddling around with all the cables and hoping that none has been ripped when screwed together

and just for fun

I forgot to show the lighted engine compartment with the last "light test" so it comes. Not very spectacular, but for the archive 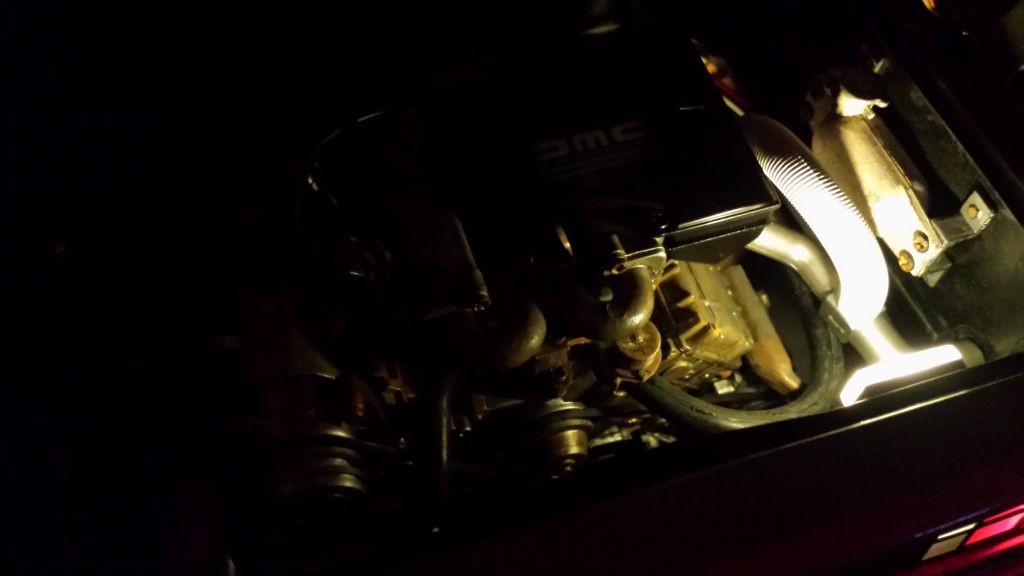 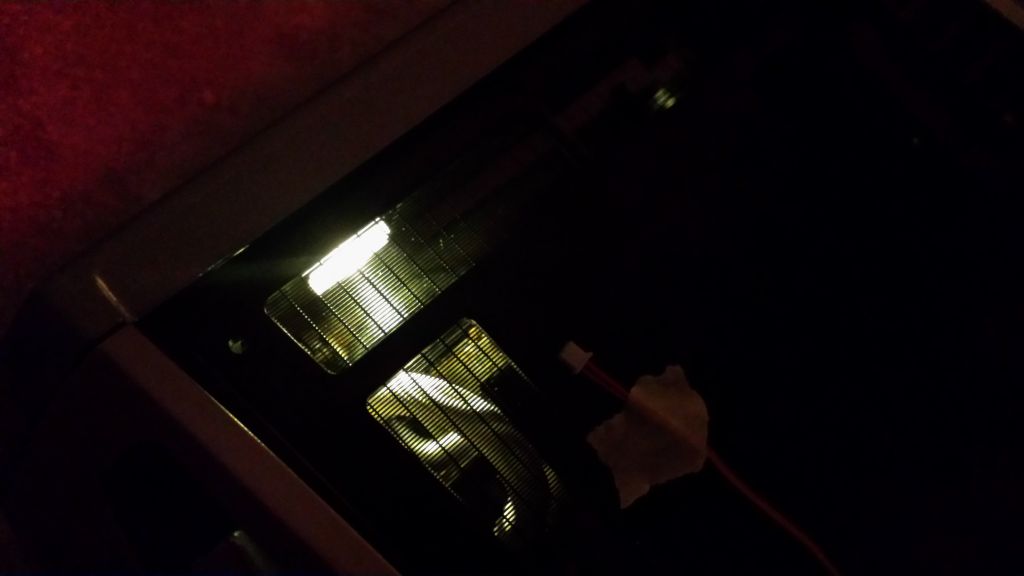 Looks nicer in RL as the light is NOT as bright as shown in the pic. On the other hand, pretty useless as it wont be visible after all the time machinery is build on the back. unless it is easy to remove somehow.


Ok, lets continue with the build. 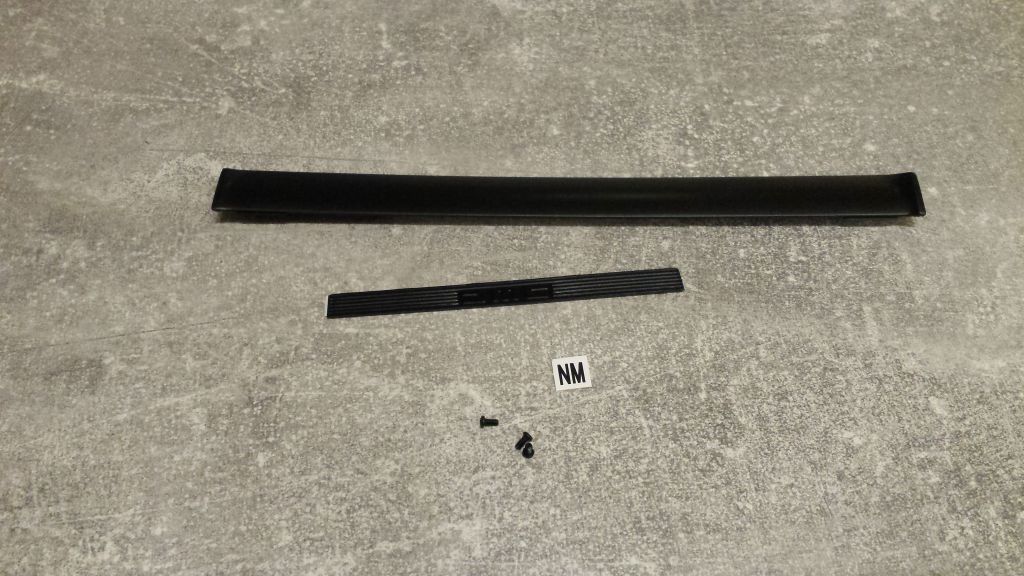 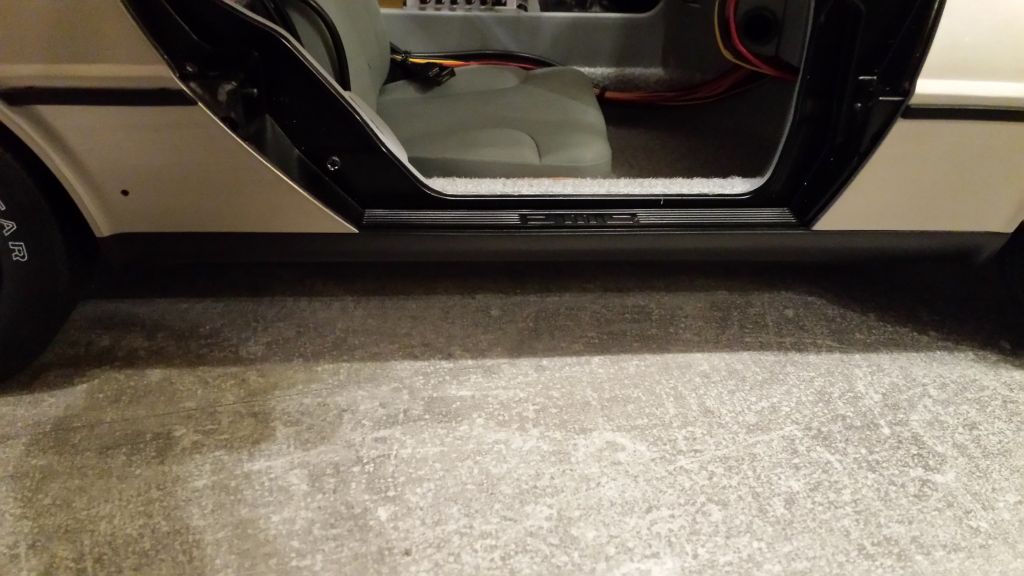 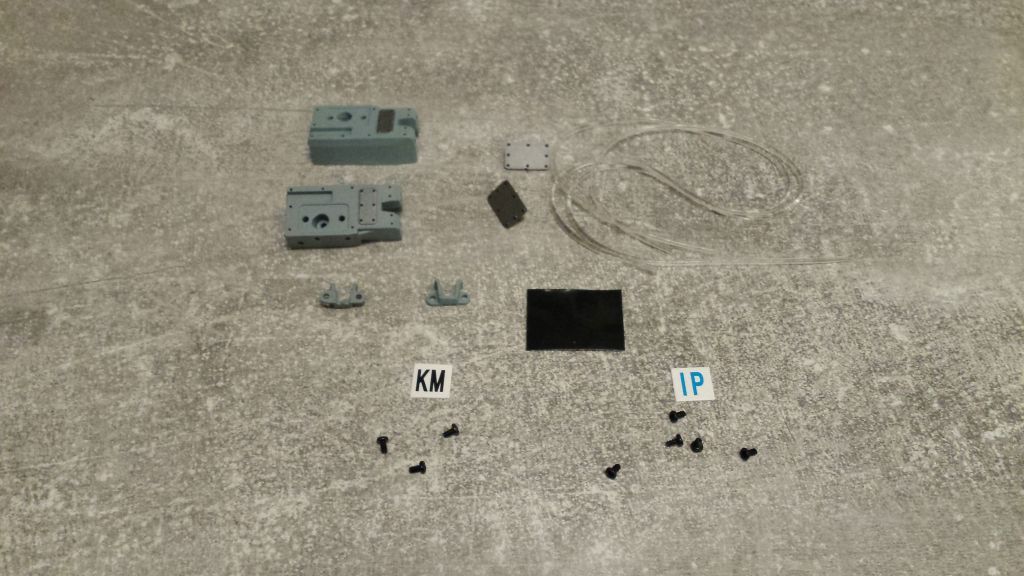 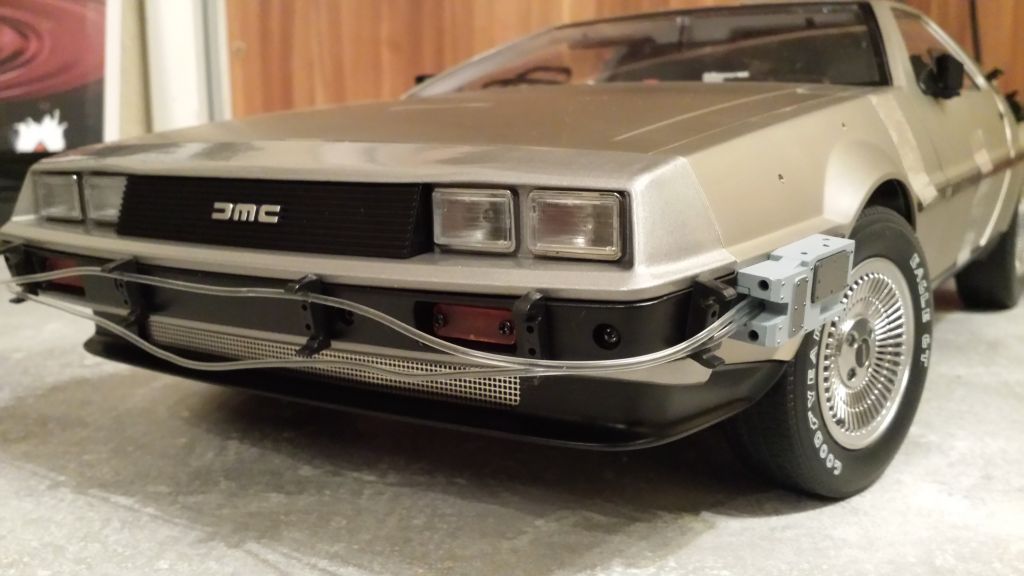 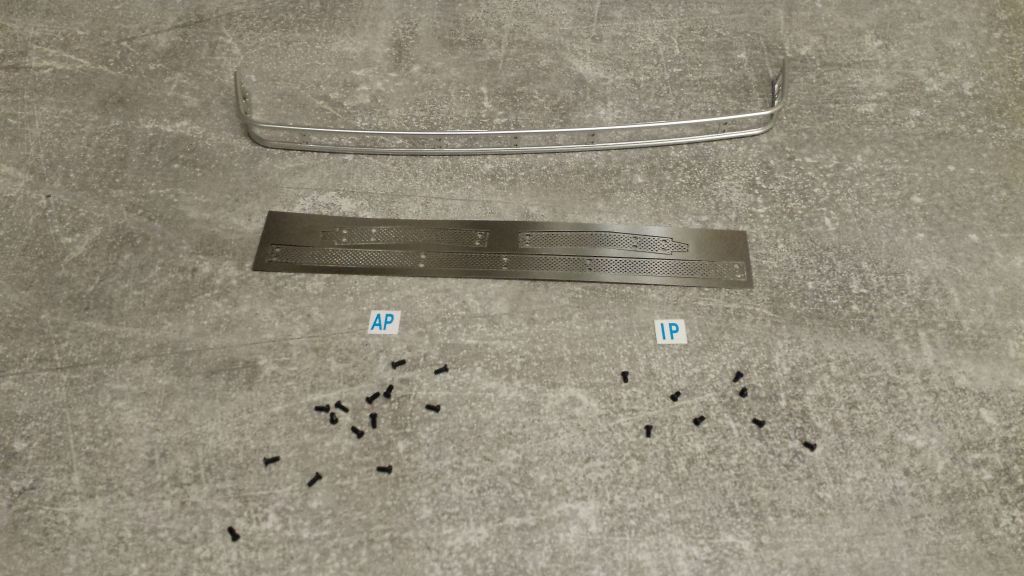 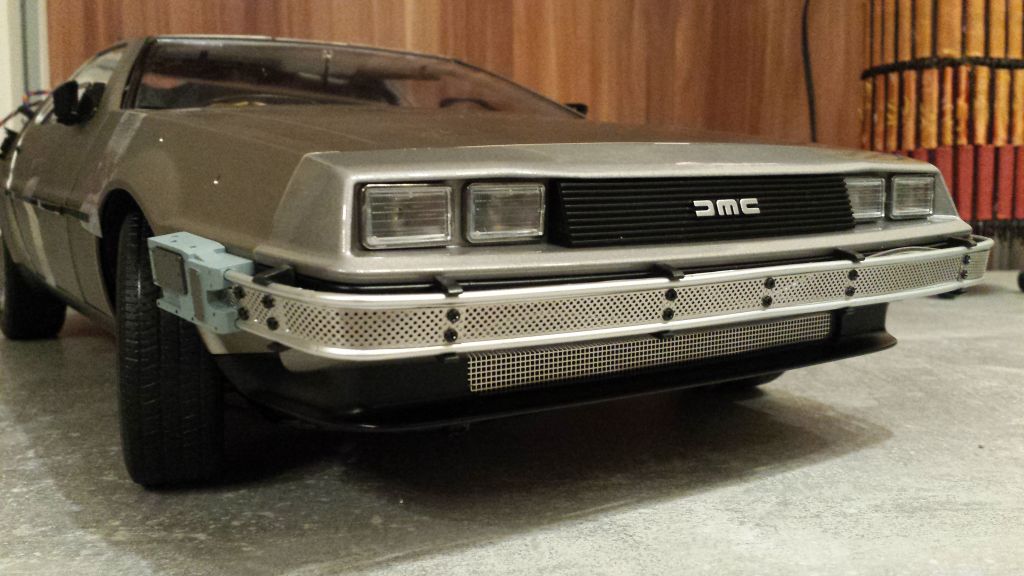 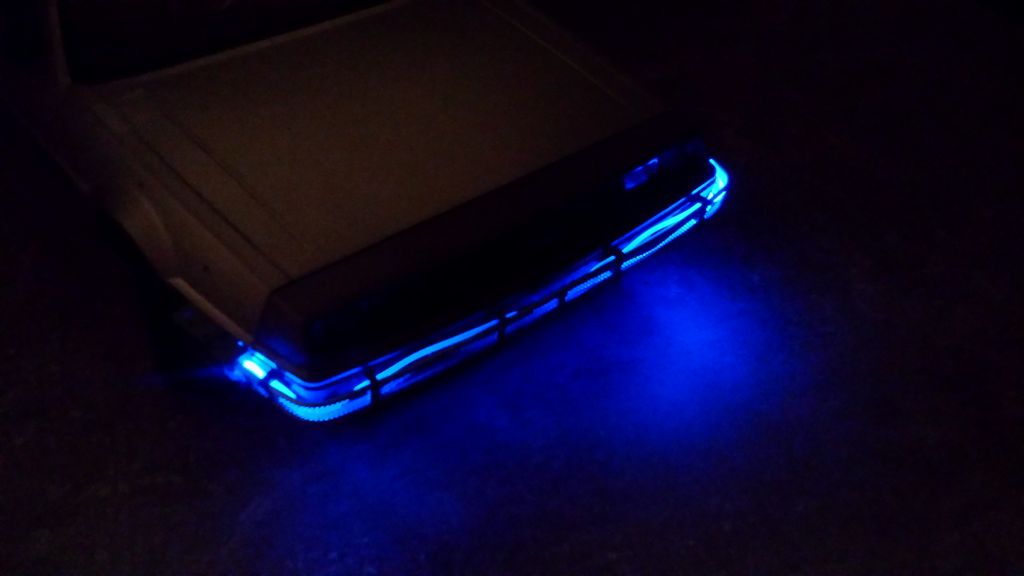 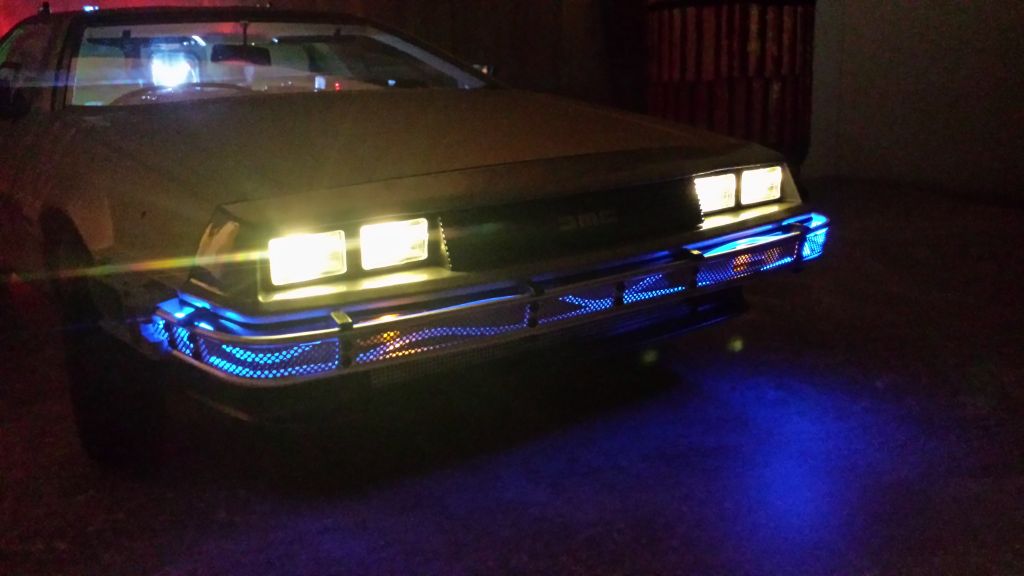 uhm...yess... its kind of "ok" for what it is, but I would have expected it a bit brighter. Need to pull the fibres in a straighter position too. Maybe my favourite Mod-Group comes up with something

hope to see you again next year 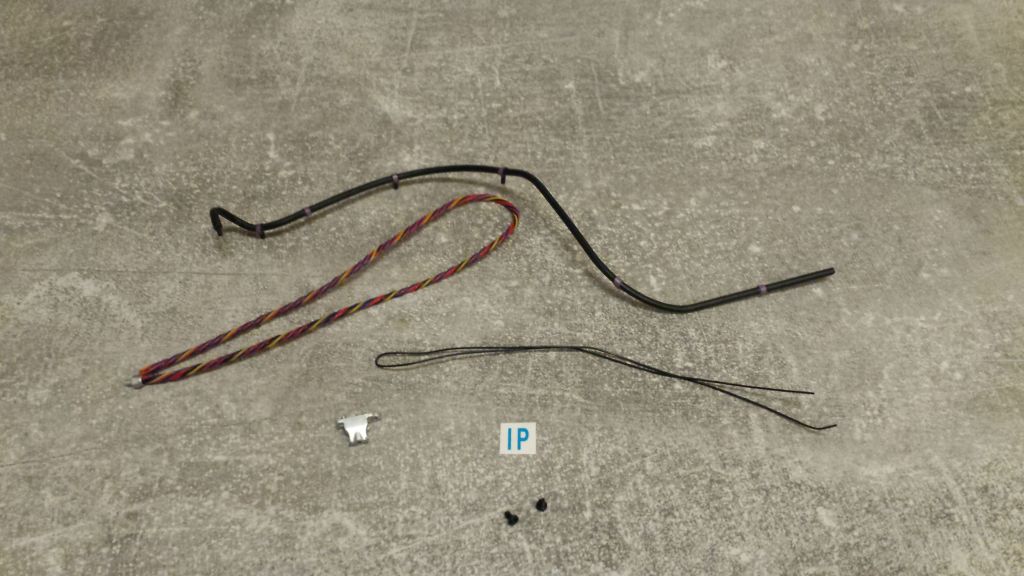 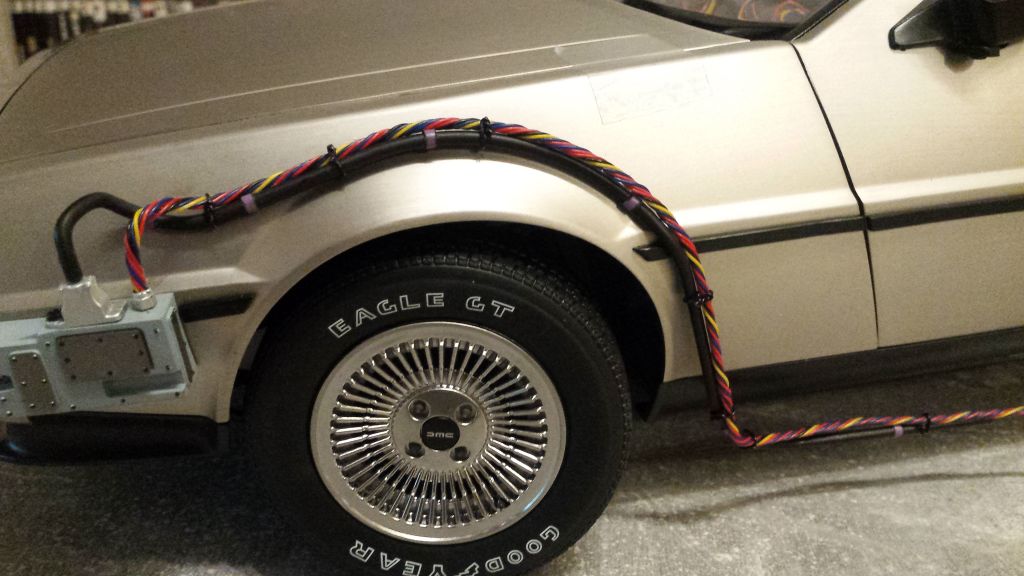 I found this EL rope unit on amazon for about 8 bucks. It´s powered by two AA batteries, and switches through three modes, constant light, slow flashing and fast flashing 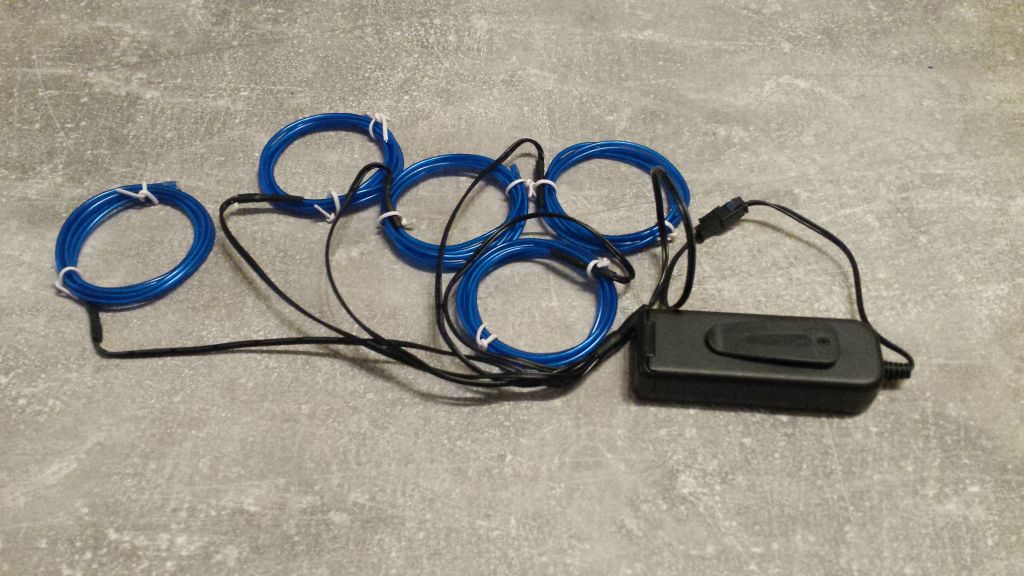 Unlike some other members from different moding-groups, I wanted to hide the light strings and the power cabel as good as possible.
So, this unit has 5 individual strings with a length of 1 meter and a diameter of about 2,3 milimeter.
Most mods I have seen so far are using a single string, to light front AND rear flux bands. So they run the light string on the outside bundle with the deco wires and covering the unwanted light with paint or black tape. It DOES the job but thats exactly what I wanted NOT do to.

First I cut off, two strings. Then I disassembled the entire front and removed the orignial Eaglemoss LED-wire. I pulled one string from the bottom and from inside of the fender on the passenger side. For perfect fit to the brackets, I needed to make the recesses a little deeper. I pulled the light string around and hid the remaining end in the hole again where the original LED came out. Now I can hide the power cable on the bottom of the vehicle and the two remaining strings fit perfectly for the rear flux bands 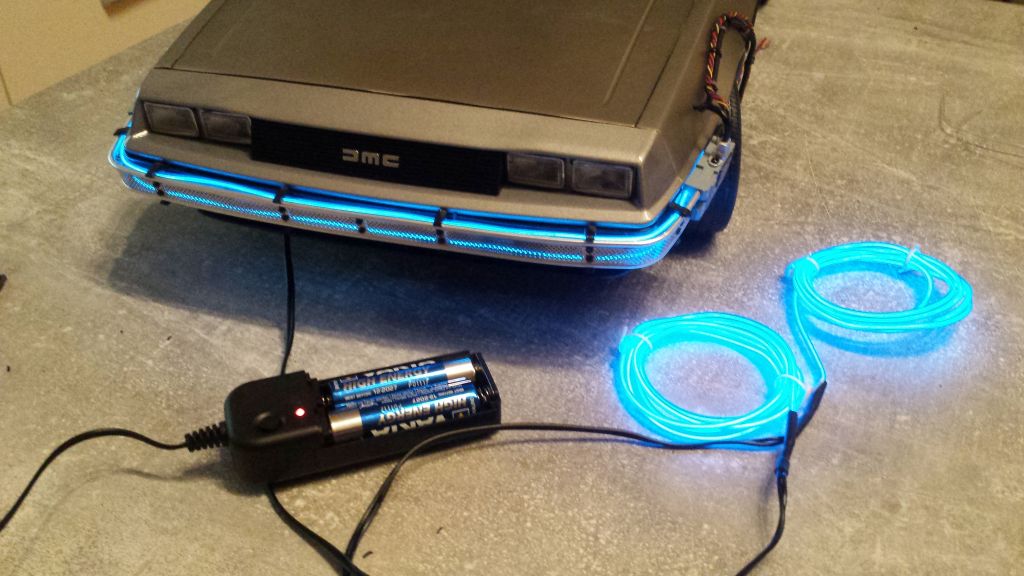 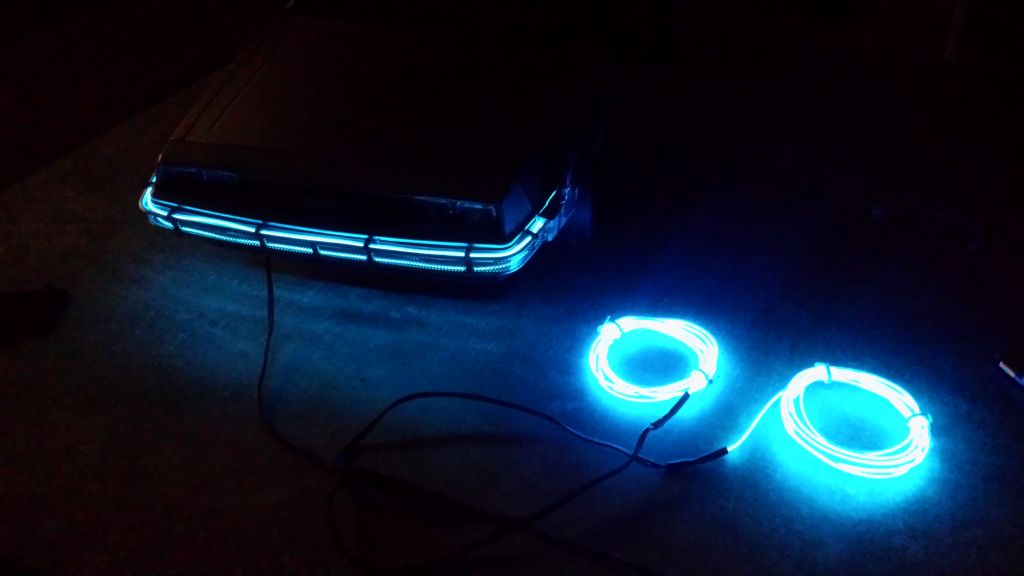 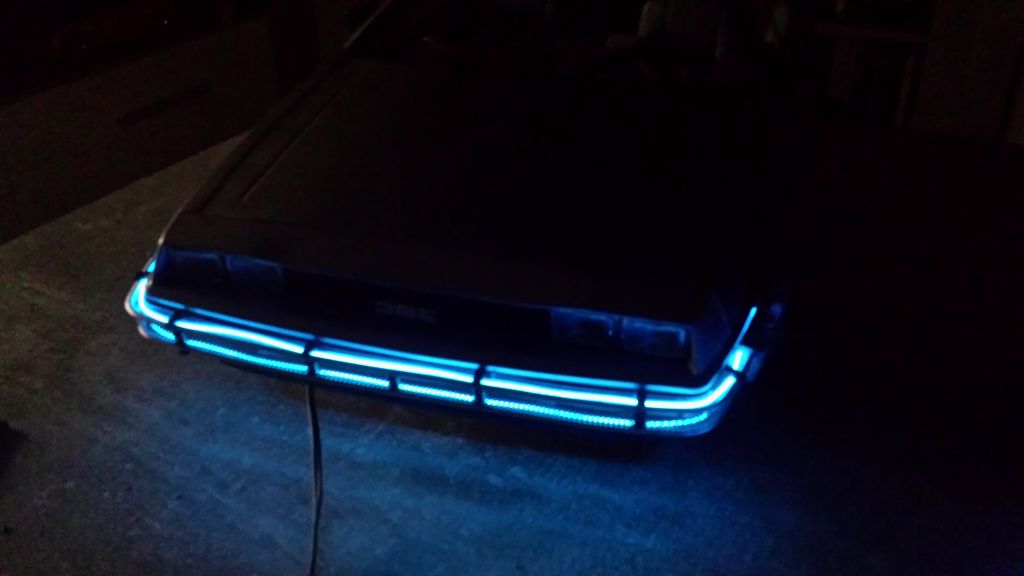 A little fidley to install, when you don´t want to pull apart to entire car again, but possible.... and man, the effort is worth it, looks so much better than the original EM light strings.

Great Scott !! At last, new issues/parts start to come in and without any more holdbacks here we go