Who prefers POTJ Amanaman over TLC?

OK, so obviously POTJ Amanan is more movie-accurate, whereas the TLC Comic Pack version is meant to resemble the version in the comics.

Despite the different purposes of each which would make for a somewhat unfair comparison, I still prefer the POTJ version. It has more charm, and is somehow scarier and more creepy. It's just a great figure, despite the little articulation and droopy headhunter staff.

No the POTJ one is not movie accurate. It looks nothing like him in the film. The vintage character was closer, but then again, none of them have managed to replicate his movie appearance. I would say of the two modern figure released to date though that the legacy one is suprior. While the sculpt is more akin to the comic of course I like the smoothness of the joints and the range of motion on the arms. I also like the height of the figure.

Vintage is still tops though.
J

I myself really like the POTJ version, that is the only one I have and he is good enough for me. I could care less if he is retooled or repainted. As much love as I have for the Jabba palace characters he only makes a very breif appearance in the movie anyways. This is just my personal opinion of course. The vintage one would be excellent to obtain because its the original but that is out of my price range.

I own all three and they are all remarkable figures. I still prefer my POTJ one on display in Jabba's palace but if they ever took the Legacy sculpt and gave him movie style feet I would definitely retire the POTJ one.
T

Blight said:
No the POTJ one is not movie accurate. It looks nothing like him in the film.
Click to expand...

Maybe i have my Amanaman's crossed, but i thought the POTJ looks exactly like the movie character, down to the pose. Does this: 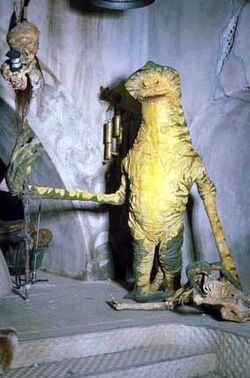 The POTJ version looks pretty accurate to me, the only thing I'd change would be the right leg. Other then that looks good and still holds up well.

No the film version does not look like the POTJ one in the least. I would know, I'm an amanaman expert.

See the POTJ one has a much more defined mouth and nostrils. Notice, the face on the movie one is fairly flat and undefined. ALso notice the body/and height relativity. Compared to other characters in the palace, amanaman is a tall dude. The POTJ figure is shockingly short. My main problem though is that face. He lacks those lines that indicate the wrinkly planarian skin. He appears rather smooth and almost lizard like while shame to say it, the nature of the film character is that of a puppet and almost bag like in his features. The hood is also much more pointed and prominent in the film, almost like a separate piece where it only comes to a moderate peak on the POTJ one.

Anyone have any remedies to help keep his staff straight? (that's what she said)

Why is he carrying around a skeleton anyway? It seems like such a burdensome thing to tote around.

Michael_Knight said:
Why is he carrying around a skeleton anyway? It seems like such a burdensome thing to tote around.
Click to expand...

I guess just to warn people not to mess with him

Michael_Knight said:
Why is he carrying around a skeleton anyway?
Click to expand...

Just because he can ... and mainly to intimidate people. It's the same reason that I walk around with my pants down.

Turbowars said:
Oh man The Crate is my favorite from Creepshow 1!!!!!!!

Thanks man! It's also my favorite. I'm a HUGE fan.

I've never seen the TLC version. I looked though the RS archives but I could'nt see any pictures of him. Could someone show me a picture of him?

Darth_Wolven said:
I've never seen the TLC version. I looked though the RS archives but I could'nt see any pictures of him. Could someone show me a picture of him?
Click to expand...

They're referring to the Amanin in the Wal-Mart exclusive Comic Pack: 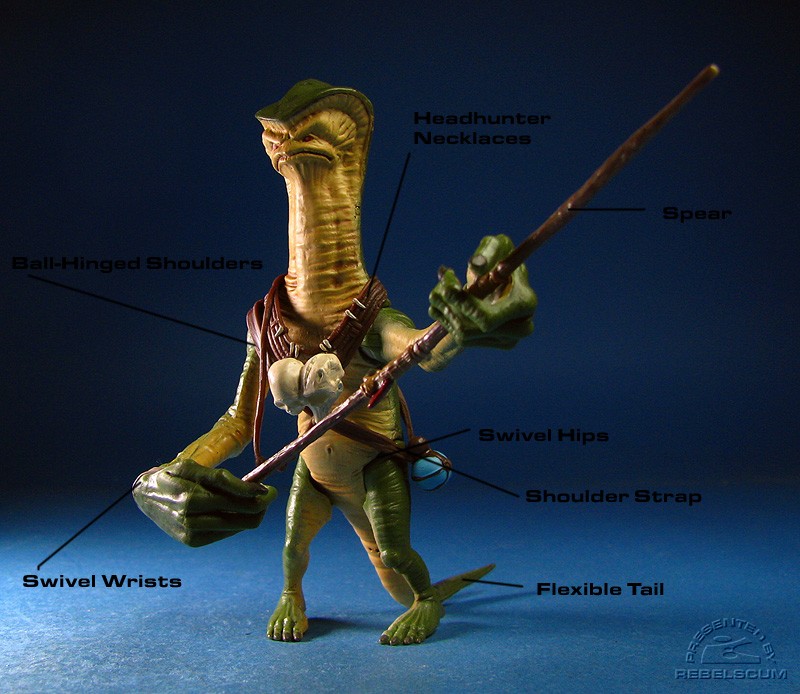 Here's the rest of the Photo Archive entry:

Darth_Wolven said:
I've never seen the TLC version. I looked though the RS archives but I could'nt see any pictures of him. Could someone show me a picture of him?
Click to expand...

They're referring to the Amanin in the Wal-Mart exclusive Comic Pack:

Here's the rest of the Photo Archive entry:

Thanks a lot Neal. I still prefer the POTF1 version and the POTJ version though, but thanks anyway.

greedo737 said:
Anyone have any remedies to help keep his staff straight? (that's what she said)
Click to expand...

I made a custom version back in 2003, using the skulls from a couple of POTJ staffs, a severed hand (for nostalgic creepiness), and some other odds and ends that was basically two paper-clips wrapped in brown electrical tape. Hasn't drooped since.

I reckon if you wanted to do an easier version, one paperclip strapped to the staff with grey electrical tape would do the trick.


As for the best version of this species, I prefer the POTJ one, as it's the closest to the movie version. They still haven't made a really film-accurate one, yet, though.

Not a real fan of the Comic 2-Pack Amani, apart from the height. The head looks like an inflated balloon, the feet are too human, and there's no real hood along the back of his neck.

I'm hoping they make a VOTC version that's more accurate and with better articulation. Preferably about the same height as the POTF version. I know it'd be a bit oversized compared to the actual costume, but dang it, he just needs to be a bit on the large side. Wouldn't mind a "Retro Vintage Reissue" of the POTF Amanaman, too. Never had the original.

Well, I still think the POTJ version looks the best, and the TLC version poses the best, but thanks to Stan Solo Creations, I now have a fantastic repro of the POTF Amanaman, and I'm just having so much fun with him!