Where Have You Seen Star Wars Today? Part 6

It looks like Disney took a little inspiration from Star Wars for the new John Carter movie. John Carter is based on the Edgar Rice Burroughs series about John Carter of Mars.

But I'd say GL definitely took a lot of inspiration from the John Carter novels for SW's tone; it's Space Fantasy - Space Opera all the way through.

Two t-shirt designs that came to my attention today. 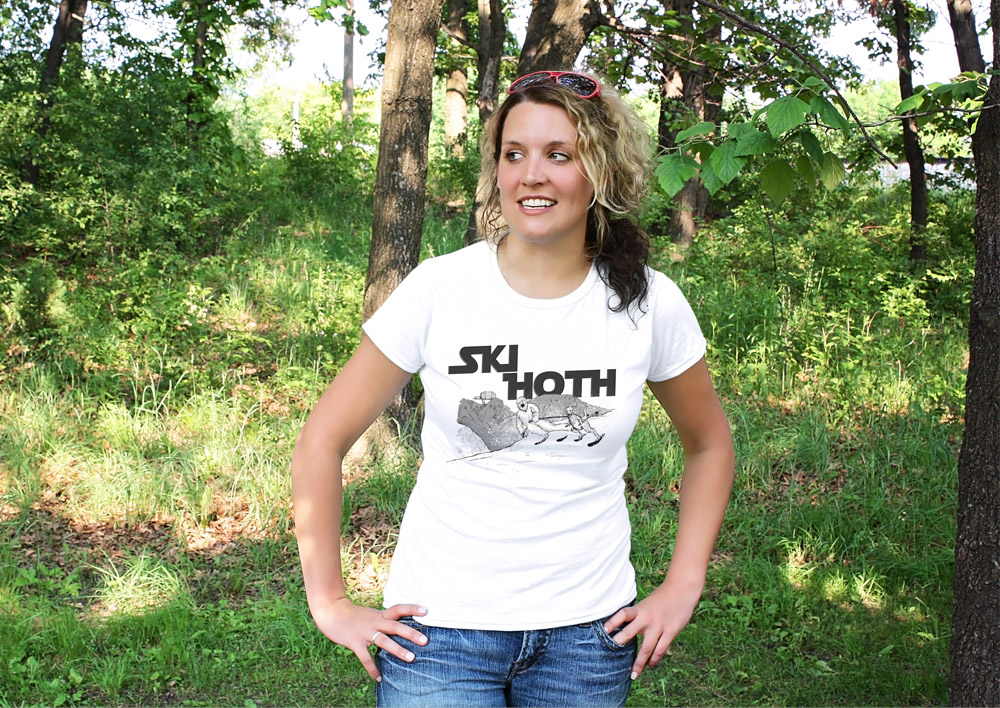 those suits are hardcore, they look awesome to be all leather

Those are amazing!
J

"Lando - Into The Future" Lithograph by BDW
J

Our local news reported on the one-man Star Wars Trilogy that is coming to Denver next week. I was excited this made the news until I hear the weatherman state at the end of the story: "Bet he's not married. Probably living in his parents basement". Now, I know that they were just doing some on-air chit chat, and the guy really is pretty nice. I've even met him before, but I wasn't going to sit back and let this kind of stuff be said on tv. I immediately wrote to the reporter of the story.

"Thanks for reporting on the One Man Star Wars Trilogy. Great, funny, and entertaining show. I recommend it to any fan if you haven't seen it.
You may want to remind your fellow anchors, that fans are mostly not the stereotypical "nerds" living in their parents' basement. That comment he made at the end of your segment Wednesday night felt a little derogatory to those of us that are stable, successful, and "sittin' at the cool table".

The reporter responded back to me within 10 minutes, saying,
"I forwarded your message. Thank you for watching. FYI -- I'm stable, successful, sittin at the cool table, and own a very expensive Jupiter 2 model from Lost in Space. Happy Holidays"

Shortly after that, I received a message from said weatherman,

"Kirk forwarded me your email. I truly apologize if anything we said could be considered derogatory. I don’t remember saying “nerds” but do I remember saying that we were joking around and simply having light fun with the stereotype. "

This response did not satisfy me. He had obviously not gotten my point. So I responded back,

"I know you guys were just doing some on-air bantering. But I always feel the need to defend people when they are generalized. It really perpetuates stereotypes. And not just things that are considered "nerdy". As a teacher, I'm always trying to encourage my students to be respectful of people who are different.


No hard feelings. But you should see some of the people I know who are real "fanboys". They are doctors, filmmakers, ministers, military officers, authors, and more. And that's just the tip of the iceberg."

I will not respond to these kinds of things in an aggressive way. Instead I feel that our attitude should show more of an educated, logical, intelligent nature. Look where people's anger gets them. In the big scheme of things, this interaction didn't really change much. Except, maybe this man will think twice before using these kinds of stereotypes.
J

This one may seem obvious, but bear with me. I'm playing the new MMO TOR. I'm on Tatooine and another player starts quoting from ANH. "I used to bullseye womp rats in my T-16 back home." Another player chimes in "They're not much bigger than 2 meters." Finally I add the kicker, "Then man your ships, and may the force be with us." I got a smile from it.

Great post, Shua. Wearing our fandom on our sleeve will always make us easy targets for "friendly" banter; thanks for sticking up for each and every one of us!
S

Jorbex said:
Great post, Shua. Wearing our fandom on our sleeve will always make us easy targets for "friendly" banter; thanks for sticking up for each and every one of us!
Click to expand...

And I just reported shua's story (anonymously) on Facebook.
J

Custom Kenner Indy "Ark" 3PO and R2 figures that I got from a customizer in the UK.

I recently discovered this 404 Error screen on IMDB: Cool shirt over at teefury! If only they had kid's sizes available...

Oooh, I like that one. I may just have to grab that one.

Well I will try this for sure, there's a «Quick» down the street where I work

Satka said:
Well I will try this for sure, there's a «Quick» down the street where I work
Click to expand...

You are a braver Jawa than I. That black bun just looks.... wrong.

Satka said:
Well I will try this for sure, there's a «Quick» down the street where I work
Click to expand...

You should send in an audio review to J&J; that's an unthinkable story, right there!

I'm so jealous of you right now, Flavien! I wish American fast food chains would do something out of the box like that.

Bring back the cups please!
J

Spoke to a TRU Media Relations rep on Friday. They have no plans to hold any Midnight Madness events for the Jan. 30th product launch.

Hopefully its a different story with Walmart and Target.
J

I watched the Blu Ray of A NEW HOPE with my 7yr old daughter. Her first time seeing the OT. The sight of a crispy Owen and Beru made her run from the room, but otherwise she was ok. She said "YES" when the Death Star blew up.
J

I've been watching a lot of Chuck recently and like many other shows it seems there is a Star Wars reference in just about every episode. Probably the best one from what I've recently seen was one where one of the main characters, Morgan, has to pretend to be a villain. So to get him into the villainous frame of mind, Chuck starts humming the Imperial March to him.

io9.com is asking their readers how they should report the TPM 3D release. io9 is notorious for their hatred of the prequels, special editions, and anything not unaltered 1977/1980/1983 vintage Star Wars, but one option on the poll is to actually review the movie as if they haven't seen it since 1999.

That option is winning at 39%. The next closest is "ignore it completely" at about 20%.

The "Bark" side of the Force? The Bark Side: 2012 Volkswagen Game Day Commercial Teaser - YouTube

Whether this is true or not, I think SW has a life of its own (it has had for a while), and that GL is the kind of person who always has new horizons to explore

I finished Star Wars: Darth Plagueis a few minutes ago. The novel is truly excellent; I can't wait to talk about it with you all!
Last edited: Jan 19, 2012 What are those funny black carded figures off to the side, I NEVER see those at any store in my area.
J