Venom 2: Let there be Carnage

Venom 2: Let there be Carnage has a June 2021 release date. The trailer looks amazing and it's awesome that they're bringing Spiderman in on it.

Wait...the trailer is out? I only saw a teaser that didn't show anything but the title. I think the title is...meh. Maximum Carnage would have been a way better title IMO. It's confirmed Spider-Man is in? I missed that too. I hope that is true because that was my big issue with Venom. Introducing and telling a Venom origin WITHOUT Spider-Man felt wrong to me. You can do it with other characters, but Venom's origin is entirely dependent on Spider-Man. I mean the ENTIRE reason he's so much like Spider-Man is because he (in essence) WAS Spider-Man.

I've never been a big fan of Carnage, I always thought he was sort of a generic role. He's Venom meets Joker and his stories are pretty simplistic. He runs around killing people. He's got the depth of a slasher movie villain...meaning not much. But the fact Woody is playing him has me much more invested. So I am at least intrigued and if it's legit that Spider-Man will appear in this, then I'll be there opening day.

LandoGriffin said:
there's no trailer and I am also unsure where the Spiderman involvement news came from
all that was announced yesterday was the new release date and full title
Click to expand...

Yeah I was confused too because I didn't hear anything the initial post said either.

I’m a sure they’ll try and tie it all together somehow. I haven’t even watched the first one yet.

that would probably require another Sony-Disney deal, unless there are things they didn't let leak in the most recent one
you aren't missing much in the first Venom, it was very mediocre, like a pre-MCU run of the mill comic book movie. Part 2 sounds good with the addition of Carnage but I don't really have any faith in Serkis as a director

I mean Keaton Vulture is in Morbius, though I'm predicting not as a real role but more as a cameo...so it not IMPOSSIBLE for Spidey to make it into Let There Be Carnage. I think there was some sort of deal details they've kept somewhat quiet. Only time will tell.

Yeah agreed on Venom. It's....entertaining enough but the essence of average. It feels like a comic book superhero movie made in the mid 2000's, that sort of style.

MysterioMaximus said:
I mean Keaton Vulture is in Morbius, though I'm predicting not as a real role but more as a cameo...
Click to expand...

That's true, but don't forget about this small detail in the Morbius trailer that really throws us for a loop: 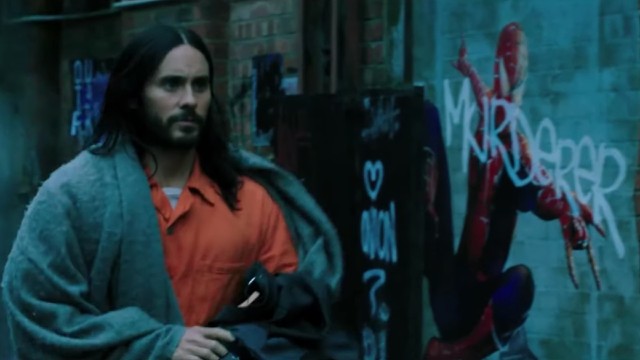 So which MCU universe does Morbius take place in? It can't be the current one because that's the Toby Maguire suit so it ties into that universe. But Vulture from the current MCU is in the trailer so.....it...argh.....*Head explodes*

Anyway, I still haven't seen Venom but was a fan of Carnage back when I was younger and hooked on Spider-Man video games. I'll watch Venom prior to the release of this.

I want to say I read that they made it the Toby Spider-Man only for the trailer, they altered it, and that it will be the Spidey from Homecoming and Far From Home in the final product. I THINK I read that. But it def. is confusing. Plus it says murderer, which is an obvious follow-up on Far From Home and how he's been framed for Mysterio's death.

My take is: Sony REALLY wants to be meshed with the MCU. The MCU however is fairly apprehensive to do it. I know one of the higher up at Sony is basically broadcasting they're working with Marvel and will be collaborating....but I also know that every time Feige is in the room, he looks rather uncomfortable with those comments. Like it's not entirely true. Not a lie either, just sort of a half truth.

My initial thought was due to the turmoil at the time Sony used the image of the Maguire Spidey instead of Holland Spidey as a way to steer clear of the MCU and whether they'd be allowing more Spider-Man movies or not.

But then the end of the trailer comes along and there's Vulture from Homecoming. So then that begs the question if they changed the Spider-Man image for the trailer to appear to be apart from the current MCU, then why even show Vulture at the end? It's like when they were putting the trailer together someone asked if Morbius was apart of the MCU and Sony replied with something like "Yes, it's not". *Head explodes*

the equation is simple enough: if they had used an MCU pic of spidey, they would have to pay royalties to Marvel for use of the image; if they used a Toby-pic of spidey then they don't have to pay any royalties -- end of day, spidey is spidey, so it doesn't matter, according to the ongoing narrative -- this was just a simple way to avoid paying any royalties to MCU for the Morbius Movie. no big deal.

I did see a trailer but I guess based on the reactions from this thread that it was edited from previously made footage?

there has been no official trailer or teaser released by Sony

CadBane said:
I did see a trailer but I guess based on the reactions from this thread that it was edited from previously made footage?
Click to expand...

Yeah that happens occasionally when a fan splices prior footage from other films (sometimes films not even from the same franchise) and creates their own trailer. I'm going to assume they just made the Riot symbiote red to appear as if Carnage and tossed in some Spider-Man footage.
J