Some of my older Hoth troopers have fraying lower SGs. I was thinking of replacing the SGs with material like LEGO capes are made from. Does anyone know what that type of material is called?
R

I contacted hasbro in regards to what material they use for their sith soft capes. I recived a reply stating they use a Polyester Pique Knit, [FONT=arial, sans-serif]Figure I would pass it on to those who want to make their own capes. If anyone knows of another material that works please reply with this as the quoted post.[/FONT]
R

1. Does anyone know of a captain rex head that is proportional to the 3.75 inch black series body?

2. Is there a method to removing the panels on the inquisitors, kanan jarus without wrecking them? I have gone through many.
G

Ryan12 said:
1. Does anyone know of a captain rex head that is proportional to the 3.75 inch black series body?

2. Is there a method to removing the panels on the inquisitors, kanan jarus without wrecking them? I have gone through many.
Click to expand...

1- Would any Jango Fett head be suitable?
2- What "panels" are you referring to?
R

Greycap said:
1- Would any Jango Fett head be suitable?
2- What "panels" are you referring to?
Click to expand...

I have yet to see one.
The panel on the hips and the shoulder armor
G

Has anyone tried to customise one of the Kotobukiya droids? I would love to have a Death Star Droid, or a 4-LOM, but I'm not sure it will either be possible or within my talent set
D

Does anyone have any recommendations for a good red acrylic paint to use for Sith customs?

Just a heads up. Montoy air drying clay (fake Model Magic) is utter crap. It isn't worth getting.

Since I lost my picture links (again), I haven't been posting here, but I intend to change that.
When I finally do what format do you think is best?

1] Thumbnails VS Full sized pictures (Why?)

2] a) Having individual threads for each custom. b) Having one thread for everything. c) Having a WIP thread and a "Finished" thread.

3] Is having tutorials or explaining the process worth the effort?

4] Putting non-SW figures here or in the Cool Toys Forum (where they really belong)?
Last edited: May 21, 2018

Assume I know nothing about painting... because it's true.

First question: If I wanted to just make something black, will Sharpie work? Is there a different kind of marker that will work better? I'm nervous of paints because I'm just looking to do a small detail.

Second question: Do I need a finishing coat like dullcoat anytime I paint (or marker something) and what would you say is the best for that?

The project is to turn a Hovertank Pilot into a Hovertank Commander. Basically charcoal grey shoulders and a single black arm stripe.

Marker may work for the short term but will eventually wear off. I would use paint the key to painting figures is light coats.

for something as small as a figure I would skip the clear coat, unless you are doing some really detailed work but I always recommend it on vehicles as they will need the extra protection

Sharpies tend to bleed over time. Gel pens or paint pens in my experience, do not.

Paint will wear off unless a clearcoat is added, especially around the joints. If you never intend to touch them again, then you can get away without a clearcoat. (I rarely use it, but often regret it).

I don't consider myself a good painter BTW and I use cruddy paints.
B

I was wondering if anyone knew of a good thread or tutorial about improving the OTC ANH Han Solo, or kit-bashing a good ANH Han? I've never been happy with any of the releases so far and I was thinking about starting with the new TVC Han from the Solo movie as a base. The legs are already the correct shade with the Correlian bloodstripe and BJ hips...I was wondering if this figure could be cut and mated with the OTC Han..? The OTC figure has a solid torso though, and the young Han has the chest articulation.

I tried a search but only found threads about other versions of Han.
Last edited: Oct 20, 2018
B

BTW...just out of curiosity, has anyone tried using the arms from the VC120 Hoth Trooper to fix those awful 80's shoulder pad looking shoulders on the Hoth Luke?

Yes, you can combine the two Hans. I did it and like it okay.

yodashizzle said:
Yes, you can combine the two Hans. I did it and like it okay.

That looks good to me! Did you have to cut the torso?

Yeah, had to cut the figure at the waist. He still has swivel action, I cut the top part on the figure so when I superglued them they would have the nub in the torso still there. 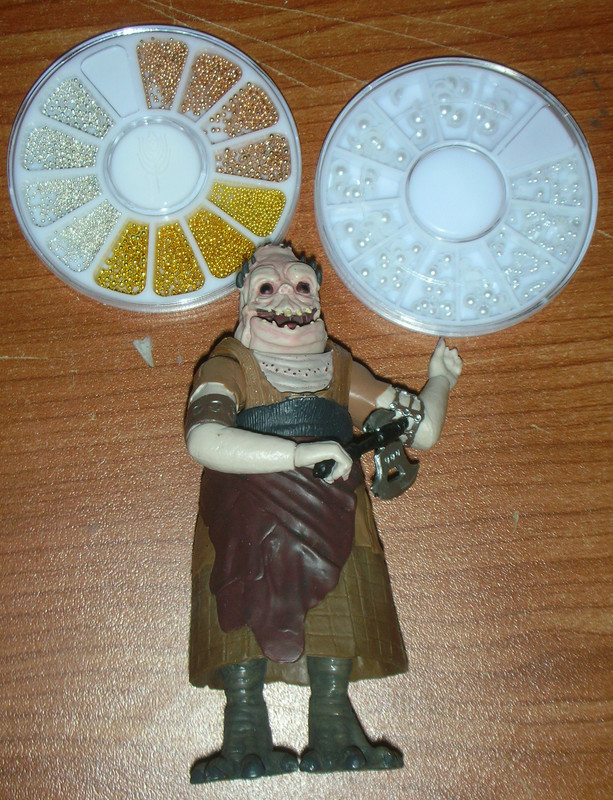 The metalic ones are b4lls and the pearl one is only half a sphere. They make good accessories to figures and also good greeblies.

The pearls were used for the "eyes" 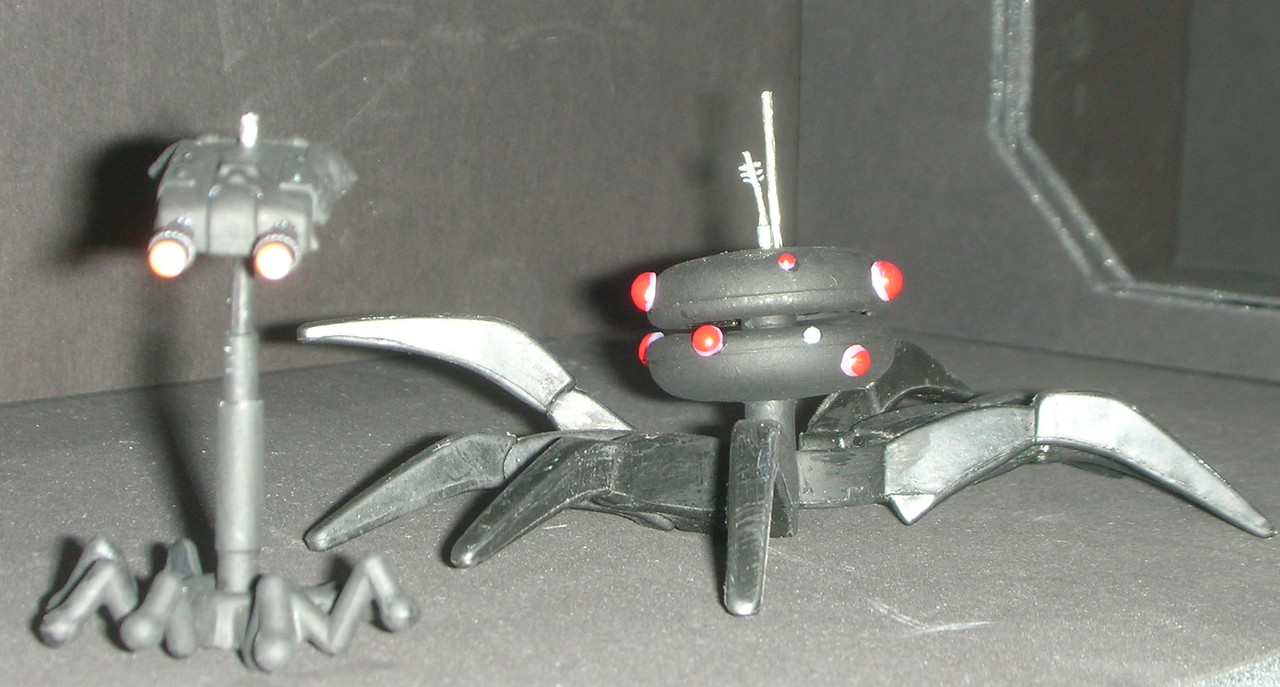 I need to make a custom lightsaber with a red blade for a 6" BS figure, from scratch. The detailing on the hilt will have not much importance. Could you guide me?

Not sure if this is the right thread, I once saw a tutorial on here about making vehicle display stands out of those plastic wine glasses. Does anybody know where I might find that?

StarFin said:
Not sure if this is the right thread, I once saw a tutorial on here about making vehicle display stands out of those plastic wine glasses. Does anybody know where I might find that?
Click to expand...

The base for these droids is a mini martini glass (I wanted the top to make cafe umbrella stands.). I used a clear straw for the stem since that is what I had on hand. I added a little peg on the bottom of the droid so it wouldn't fall off. If I wasn't rushed for time, I would have done it a little better.

DarthPyross said:
I need to make a custom lightsaber with a red blade for a 6" BS figure, from scratch. The detailing on the hilt will have not much importance. Could you guide me?
Click to expand...

I have tried and tried, but I cannot seem to find a good metallic gold acrylic spray that works on figures and is a true gold color.

I’m trying to do a SA version of Commander Pyre, and I tried Tamiya, which sprayed evenly and wasn’t tacky, but unfortunately it was extremely yellow.

Can anyone point me into the right direction?

I love the design for the Maz's Castle droid ME-8D9 and would really like to have a go at customising her. I've got a little experience and am fine with minor sculpting of organic but droids don't turn out so well - symmetry and smoothness are tough. Does anyone have any suggestions to either help with the sculpting or some potential figures to avoid major sculpting at all?

I'm looking to make an E-wing out of the old POTF X-wing. Anyone here know what wings I could use? The wings on the E-wing bend a bit downwards at the end. I've searched ebay and nothing really comes close. Anyone have any suggestions?

Is there any way to remove the belt from a superarticulated 3.75" stormtrooper? Thanks in advance.
S

I'm looking for recommendations for sites that have 6" scale head casts and such. Hoping you guys can help me out.

Segnett said:
I'm looking for recommendations for sites that have 6" scale head casts and such. Hoping you guys can help me out.
Click to expand...

Look up Outer Rim Traders, lots of goodies. There are other sites as well, but this one I know of.

Anyone have any suggestions on what color I could use for rebel fighters? Particularly the X-wing and E-wing.

Im just getting back into SW, and am obviously disappointed in the lack of SA figures of a lot of characters from the newer films. I wonder if I can ask; do the heads from the 5POA figures also fit on the SA versions? Obviously not the new figures where they have chagnged the joint system, but some of the slightly older ones.

Can anyone tell me a list of Vintage Collection figures who use the newer double-ball style of heads? Wanna know who I can easily head swap with the new pilot Luke
D

Hey all! I'm new to customizing and was going to try and do a simple custom of a Bandai Star Wars R2-D2 droid. I want to spray paint his blue parts and make the green R2-A6 from TPM. Any advice on how to go about this without wrecking the plastic?

Not related to customizing, but I couldn't think of a better place for these questions. After sorting through some loose accessories, I'm stumped on these:

1. I know the top blaster came with Shira Brie from the Evolutions pilot pack, but was it packed with any other figures? I seem to have acquired an extra one...
2. Any ideas about the lower blaster?

I found the three black pieces in a box of GI Joe stuff circa 2008-ish leading up to the first movie. Aayla's lightsaber is for scale. The box used to contain a lot of 21st Century/BBI/Forces of Valor stuff too, but these pieces are soft plastic as opposed to the brittle plastic those guys used. Marvel Universe is another possibility. They look like tripod legs, but I can't figure out where they came from.