Looks like a further update to the big-wing TIE fighter is in the works, our friends at Jedi Defender have posted the following article:

Now we need a movie-deco TIE Interceptor with the same center section!

looks good but the two grey saga tie fighters i have are sufficient for me!
can't see there being much demand for this considering a lot of people would have the one of the previously released ones
W

I still need to get two of the whote legacy rerealease

Looks great - a testament to the strength of the original Kenner design that they're still using it as the basis for new TIEs.
I'm sure there'll still be a few nay-sayers complaining about the screw points on the pylons, or the supposedly 'inaccurate' viewport, but it's always been good enough for me. The new cockpit interior looks awesome as well!
Can't wait to see the finished product.
D

I'm sure there's a way to internally keep the cockpit screwed together. But I'm relieved it took them a short 32 years to figure out the 'third' laser cannon.

Looks pretty cool. I won't be rushing out to replace my existing TIEs, but if in the future I do buy another it'll be great to get the bonus of updated cockpit detailing as nice as this. It's certainly a giant leap forward in terms of complexity.

This is good news! I will just wait for this to come out instead of getting the one that's at toys r us now. The only big scale tie fighter I have right now is the rebel one. I'm glad I read this post before I picked up the one at toys r us!
T

Considering I've skipped all the large-wing TIEs so far, this may be the one to pick up! Now, to find ROOM for it... (one of the major reasons I didn't pick up the previous ones, along with POTF2-pack-in crap or just not really caring for the deco/price/whatever)

Now I don't need to hunt down another Big-Wing TIE. I'll just wait for this one instead.

I may get one. I'm not sure. It definately looks like an improvement over the old one.
D

So the one after this will be the one with the electronics then? I believe the TIE fighter is proof positive, as if we really needed to cite a particular example, that Hasbro deliberately hold off upgrades to use as an excuse for a later rerelease.

However, I have a grand total of zero large wing TIEs and am determined to get this one..maybe two. Heres hoping for a grey one. Even if the actual props were blue they didn't look blue in the films so I'm for the grey version.
O

Yeah, I'd like a light gray or white....no blue please.

Devo said:
So the one after this will be the one with the electronics then? I believe the TIE fighter is proof positive, as if we really needed to cite a particular example, that Hasbro deliberately hold off upgrades to use as an excuse for a later rerelease.
Click to expand...

My thoughts as well.
D

My only complaint about my tie interceptor is that the cockpit seat sucks, and the pilot can't even see out the window because he sits way too high. I've been tempted to rip the seat right out, and have the pilot sit on nothing. I would be tempted to get one of these for the cockpit alone, and put the interceptor wings on it.

ReverendStrone said:
Looks pretty cool. I won't be rushing out to replace my existing TIEs, but if in the future I do buy another it'll be great to get the bonus of updated cockpit detailing as nice as this. It's certainly a giant leap forward in terms of complexity.
Click to expand...

That's pretty much how I feel man, I just got the TAC white large winged TIE (which I love btw), so I'm not in any hurry to update it. It is excellent however, to see the interior getting some new love though - & the ixnaying of the superfluous third nipp.. I mean, middle gun.

Finally,... but really, what took so long Hasbro?

WOW.....another way to reissue something with a twist to suck more money out of some of us.
S

Marketing at its finest!!!!!
K

It's nice but it's too little too late I feel for me. Possibly a lot of others as well. It'll be interesting to see their pricepoints for this one. Too bad they wouldn't offer just the cockpit without the wings for those that want to upgrade. Like many others I'm out of room and continue to lose interest.

Any excuse to buy another TIE. Looks great too.

Looks ok but I doubt I'll be picking this one up, I'm already hgappy with the versions I have hanging around.
N

I don't see why it's that big a deal. It's not like you'd be displaying the TIE Fighter with the inside of the cockpit in plain sight anyway. Just another attempt on Hasbro's part to try and get more money out of us. I haven't bought any of the larger scale TIEs, happy enough to get by the the POTF version.
T

I haven't bought a TIE fighter since the POTF2 version came out. If I can find somewhere for this, I may buy it.
V

I was lucky enough to find the TIE in the grey/gray color and liked them. I saw the repaint at TRU (white) and passed since there were no real changes and now I would be interested in this one with the updated cockpit. Even seatbetls are so awesome and so politically correct.

Right, just when I'm making this:

But I applaud Hasbro's efforts, just like their update A-Wing cockpit.. The tub-with-stickers approach is so 80s and it was about time the cockpits got this treatment. I only hope they are completely done with the small scale TIE. That's a thing of the past.

Ugh. I already have five of the big ones - one blue, two grey, two white.

Don't really need/have the room for another.
M

I'll pick one up I only have one large wing TIE so this will give me two.
O

I might get two, just to sit to the sides of a future updated Darth Vader's Advance Tie Fighter. Good thing I skipped the Saga2 one(s).
T

wow is that sucker gonna light up?

But I applaud Hasbro's efforts, just like their update A-Wing cockpit.. The tub-with-stickers approach is so 80s and it was about time the cockpits got this treatment. I only hope they are completely done with the small scale TIE. That's a thing of the past.
Click to expand...

Its a nice touch, but certainly not worth picking up the ship all over again only for that. If you were planning to add another TIE to your army anyway, well then youre in luck, but otherwise, no big deal here as far as I'm concerned.
D

At the very least Hasbro, Please, please, please make this ship very light Imperial Grey and give us the same thing (in the same color) shortly afterward with the movie accurate TIE INTERCEPTOR.
B

my tru still has 10 of the old ones sitting there with a inch of dust. its nice but come on. is this really need at all?

boff123 said:
my tru still has 10 of the old ones sitting there with a inch of dust. its nice but come on. is this really need at all?
Click to expand...

This trend of constant, incredibly slight updates to TIE fighters is really scummy, and not in a good way like this website. They should have done this back when they first released the big wing fighter.

I ain't getting another TIE until they fix the flattened hexagon on the back, as seen here. I'm pretty sure all the angles in it are supposed to be equal. 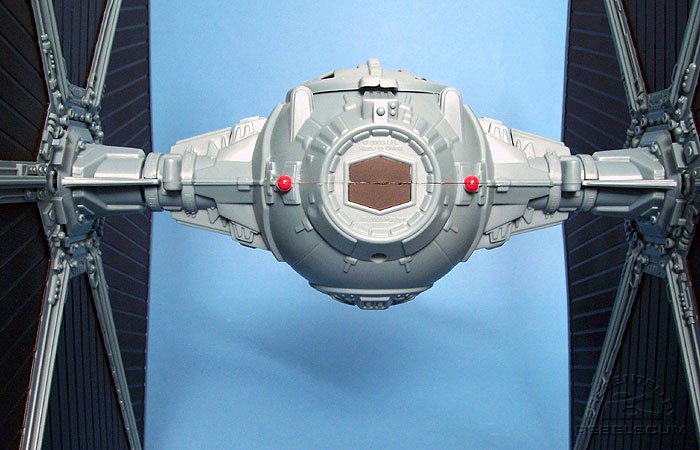 I think they just need to redesign the whole damn central part of the ship. Then that will be the ultimate Tie Fighter.

Personally, I think collecting the ships is becoming a chore because they are releasing too many versions in too short a time span. They had to make every prequel era ship in CW colors and now they are re-releasing the ARC-170 in Imperial colors for a whorish price and I'm sure it won't be too long until the Gunship comes out that way.

Unless it's a new ship, I think I am going to see if I have the patience to wait out these re-released ships until the very the end of the line, 2018, 2030, 2050, whatever it might be. At that time, I'll look on Ebay, or whatever site exists since Ebay is making all the wrong business moves right now, and buy the best versions of the ships. I may not be getting too many ships for a while but at least I won't have to own 50,000 Tie Fighters or 32,000 Gunships to make my decision. If there are more than one version of each ship I like it will still be a considerable savings.
M

The only way I will get this is if they have the two main guns light up with movie accurate sound effects and the price point is good. Then and only then will I get one.

It's such an annoying feature isn't it! I have mine sitting on top of a bookshelf, so the wings are always resting level on a surface. People wanting to hang them up must really hate the sagging wings, it looks terrible.
You must log in or register to reply here.
Share:
Facebook Twitter Pinterest Email Link
Top