This week's "Everything About": Biker Scout

I've been thinking about the knowledge base we have represented, and it occurs to me that we've never really tried to harness it before. So I'm wondering if we could experiment and join with the ROTJ Facebook group to do a purely informative thread. As in: everyone in both communities share what you know about the Biker Scout, not just what pieces you own. Teach people who don't know anything about the figure, what to look for, what the variations are, prices, stuff like that. A little introductory course where our members share their expertise with collectors who might not yet have the benefit of their years and experience.


So, what do we know about collecting Biker Scouts? Anyone want to start us out?

All I know is I own one moc 77 back biker scout with an anakin offer , it’s a short mouth which is the made in Mexico figure , the made in Mexico on the back is obscured with the anakin sticker . It has the darker blaster which I believe is the Mexican weapon? Beautiful crystal clear bubbles , one of my favorite pieces , would like to obtain more moc biker scouts as he’s an awesome figure .

How about with each one of these you do, provide a link to the Rebel Scum database in the initial post? Lots of great information on those pages for beginner, or even intermediate, collectors!

I had a 77 back, but when it arrived the bubble was completely destroyed. It was also the Made in Mexico figure, with the correct darker grey gun. The one I have also has the letter "A" on the blaster.

There are other variations as well, mostly based on the COO (Country of origin). Hong Kong, Taiwan, Mexico (Lily Ledy) and a COO removed. All of them have subtle sculpting differences. I have noticed that the Ledy scout also tends to have a "Hard Torso" sort of like the variant of the Snowtrooper. Like any of the white troopers, he can be subject to yellowing, yet others still as pristine white as the day they cam off the card. It's also very hard to get him to hold his blaster properly.

There are several known card variations, such as the 65 back, 77 back, 79 back and the POTF card. Several foreign cardbacks also exist, such as Palitoy Trilogo and the Lily Ledy.

Kenner Baggie Biker Scouts have a category III rating, which are not super rare, but relatively hard to track down. Expect to pay a bit more than most of the available baggie figures. The baggie should be a crisp feeling clear plastic and have a heat seal. Printed bue stamp Made In Taiwan.

Fortunately I have a Hong Kong baggie in my collection, along with a carded Trilogo example. Also many loose figures from across all COO's and sculpts. I hope to add at least one ROTJ and down the road, a POTF. It's an awesome figure, and has been a favorite of mine since childhood.

speaking as someone who played the crap out of the biker scout (35 yrs ago?)... so great as it had exploding parts....i fully comprehend why the biker flaps are in short supply...
Greedo: how about we make that short mouth scout an addition to my collection! :whistling:
L

Seems odd to think the MOC POTF biker scout was such an inexpensive piece back then, even though the ROTJ MOC biker scouts were produced in larger numbers.
Last edited: Jan 19, 2018

BTD2 said:
speaking as someone who played the crap out of the biker scout (35 yrs ago?)... so great as it had exploding parts....i fully comprehend why the biker flaps are in short supply...
Greedo: how about we make that short mouth scout an addition to my collection! :whistling:
Click to expand...

Not happening my friend, it’s an awesome piece and I might take a photo of it , sadly I’m not smart enough to upload it here myself , any help would be appreciated, id love to get a biker scout with emperor offer with clear bubble , since mine is a clear bubble the yellow ones really turn me off .

In reference to the MIM Biker Scout I have two of them both on 65B card backs. What makes them so interesting is that one sports the true dark gray Lily Ledy gun and the other has the Kenner light gray gun therefore supporting the theory that a MIM figure is ever really a LL only if it has the proper LL accessory.

Also in reference to the skinny leg no COO Biker Scout I have this variant on a US release 77A with a Made in Hong Kong COO.

DIFFERENCES:
Compared to his Kenner ("Made in Taiwan") counterpart, the Ledy Biker Scout has:


- a hard more detailed torso
- an unique COO (COO no. 7)
- in addition the Ledy Biker Scout can have small numbers on the right and left heels, probably used to distinguish the different molds for Quality Control purposes during production. Numbers 1,2,3,4,6,7,8 have been confirmed. (kudos to Lars for discovering )

ACCESSORIES
The Ledy Biker Scout came with a dark grey blaster which has a different mould compared to a Kenner blaster. Mostly there is a little "A", "B", or "D" on the grip.

LEDY VARIATIONS
There are not less than 3 variants of the Ledy Biker Scout. These differ in the pattern of the belly wrinkles and the appearance of the "V'-shaped buckle. Thx Dan and James for providing pics of your variants! 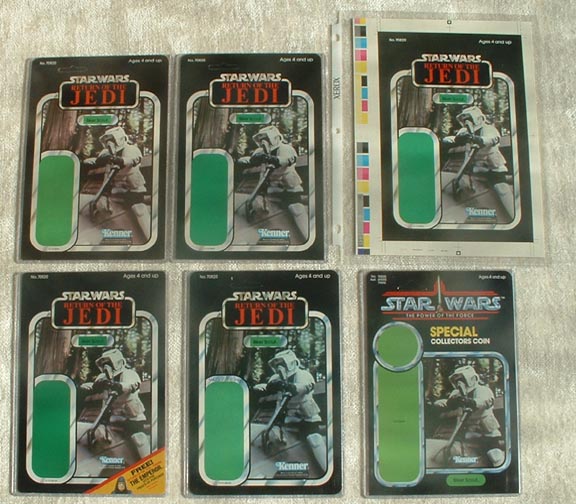 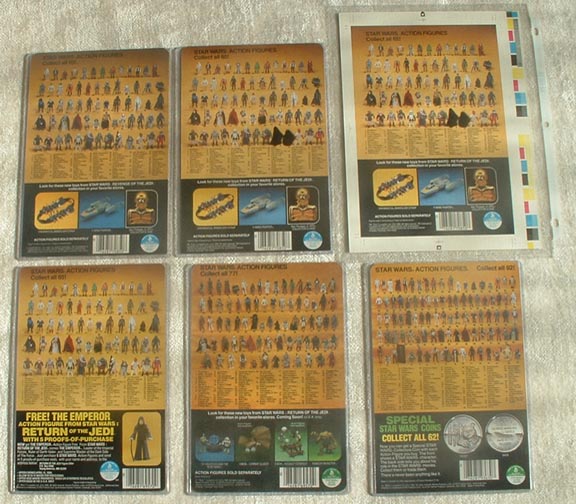 In order from left to right we have: a Return of the Jedi 65 back transition card with the Ewoks showing and Revenge wording on the back, a 65A back with the Ewoks blacked out, an uncut 65A back with the color bars still present (which I feel is an uncut production card, thus it's place later in the series), a 65C back sample card with the Emperor offer printed, a 77A back signed production sample, and finally a POTF 92 back. The only other variation I have come across is a POTF sample card.
Click to expand...

So it would makes sense that both figures share the same mold characteristics, despite their COO differences as they belong to the same COO family.

Compared to his Macao brother, the PBP Biker Scout has
- A more detailed (“hard”) torso and head
- Different spay mask used for the “eyes”, pouches on the hip.
- More? (except for the different COOs )
Click to expand...

I remember getting a couple of those with Biker Scouts. Such a shame most were packed without weapons. I seem to remember one of mine actually having the blaster, but I could be wrong.

The Biker scout figure has a very important role in the world of polish bootlegs http://forum.rebelscum.com/showthread.php?t=1107591&highlight=jakub
S

I don't know I can say much more about the Biker Scout other than display mine. It has a 'red tag' sticker which is not that usual and meant a reduction on the price.

Notice both short AND long mask versions.
Click to expand...