The Rise of Skywalker - The Emperor Mini Bust

Part of what was supposed to be revealed during Star Wars Celebration Anaheim this year!

Looks nice. I would like to see a sculpt before ordering though, and that’s not always an option recently.
Last edited: Aug 24, 2020

Great, now I have to try to meet Ian McDiramid again..

Nice. I might have preferred cloudy eyed, decaying hands Palps but good to see TROS get just a little bit of love.

Nice to see the movie get a little attention.

If they nail the face sculpt, I'll be interested, I loved the robe look he had after his "transformation," even if it made little sense.

It looks pretty cool, however not cool enough to warrant me actually buying this & replacing my episode 3 Palps bust signed by Ian Mcdiarmid, imho
T

I like the pose but it's not for me, I'll continue my search for the ESB Emperor.

I like the pose but it's not for me, I'll continue my search for the ESB Emperor.
Click to expand...

Yeah it does look like it’s been cut off too high.

As I anticipated in another thread a few time ago, I was completly sure that this minibust was coming. I like the concept, but it's another Palpatine. GG it's not taking any risk in the sequels minibusts and they are choosing characters that they know will be easy sold. I would like to see more new important characters not yet done as a minibust from the sequels instead repeated characters. From the 4 minibusts announced of the ep. 9, only the sith trooper it's a new character.
Last edited: Aug 24, 2020

I like this bust, the idea looks pretty cool but Ill wait to see the sculpt to get excited. It should come with strobe light effect from the movie. Lol

Sent from my SM-N960U using Tapatalk

BenObi_70 said:
Nice. I might have preferred cloudy eyed, decaying hands Palps but good to see TROS get just a little bit of love.
Click to expand...

Same. That said, with how much Gentle Giant loves Palpatine busts, I wouldn't be shocked if that happened eventually.

I like it - will definitely order. I have wanted a TROS Palpatine to add my collection.
H

Looks good to me!

I was thinking about this being a possibility yesterday not knowing anything about it... I like it and will probably buy it. Would I have liked a new, unproduced character instead? Yes, but this is cool. I’m surprised they haven’t made an ST Leia and Han bust yet, honestly.

I'm going to pass on this one as I have a Palps in my collection already. This one looks cool. I was thinking this character would have been a cool statue if they did one of him still hooked up to the machines.

I like it! The red really pops on this one. Hopefully the actual bust looks as good.
A

This will be an instant preorder for me !

I'd have liked a statue oof him attached to the machine but this is still a cool bust and unbelievably I've lost the other 3 Palpatine busts.

There's not much (if anything) I'm interested in purchasing from the ST, but admit this did turn my head. But 5 months later not a word from Diamond (GG). I wonder if this concept quietly got shelved or they're too busy cashin' those Mando checks.
H

MrPickles said:
There's not much (if anything) I'm interested in purchasing from the ST, but admit this did turn my head. But 5 months later not a word from Diamond (GG). I wonder if this concept quietly got shelved or they're too busy cashin' those Mando checks.
Click to expand...

I'm hopeful this is still on track as well but we still haven't seen final product photos of Dark Rey yet so it might be a while.
N

Looks mint, gotta pass. Won’t be collecting anything from the ST.

Halomite said:
I'm hopeful this is still on track as well but we still haven't seen final product photos of Dark Rey yet so it might be a while.
Click to expand...

It just a matter of time. I'm sure both busts will be released. For sure I will buy both and all other future busts from the sequels. I hope there will be more, there it's still missing attractive characters like Poe, Snoke, Jet troopers, Knights of Ren... that needs to be done.

"I might have preferred cloudy eyed, decaying hands Palps" - I strongly agree, otherwise why even do this one?

Preorders are live... I think it generally looks good and I love his crispy fingers, but there's something about his face... I think it's that the level of damage / wrinkling on the bottom half is so minimal compared to the top. 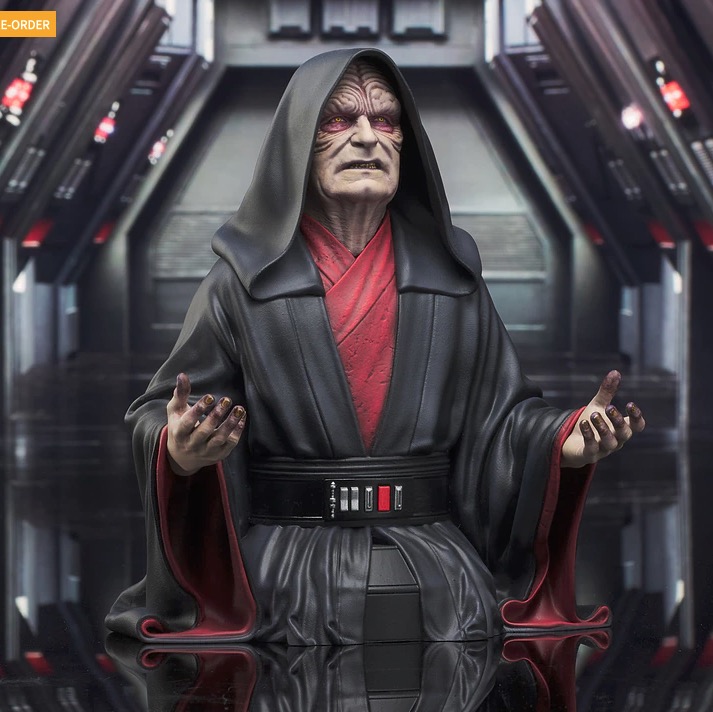 Also, maybe it's just the lighting, but I feel like we're missing a ton of detail in the red undershirt... 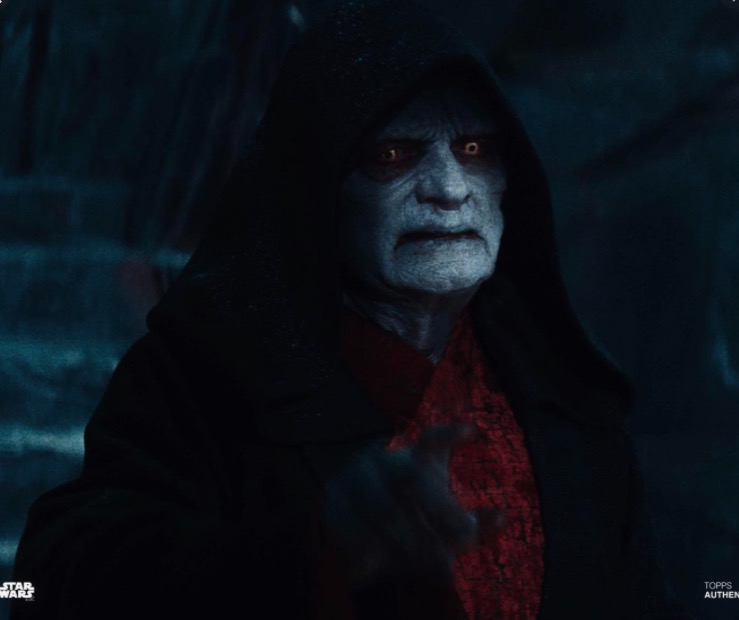 That face is way off, sorry but it looks like the bad guy from The Mask when he puts the mask on. I thought the emperor was blind in those scenes.

Sent from my SM-N960U using Tapatalk

I can't find the page to pre-order it. Does anyone have a link?

Nice piece but could be improved. The face ton is different from the film also the red undershirt. The face it looks like a fat man...The concept shown was better

Not for me. Already have the two previous Emperors (plus the Darth Sidious bust). Honestly, can’t justify another when the PGM Emperor from a few years back was the definite version for me.

Darth_Malvagio said:
I can't find the page to pre-order it. Does anyone have a link?
Click to expand... 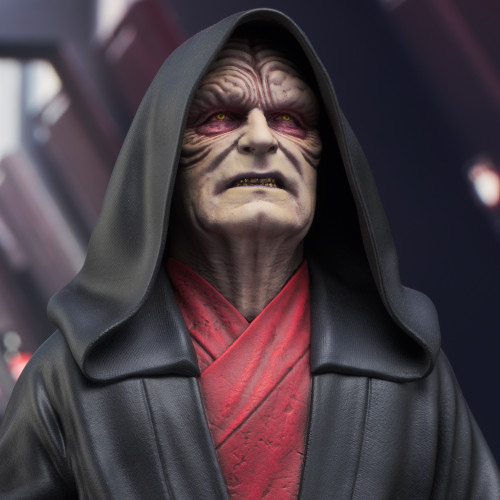 Regarding likeness this is a vast improvement on previous abominations the first ROTJ Emperor looked like the witch from snow White.
Still gg not hitting the mark for me.
T

Not for me. The sleeves would be a bit of a concern for me, is it all going to sit level or will it be a bit wonky! My Amanaman doesn't sit right as the staff is too long.

Not a fan of the face either

GG nailed the Sideous face over a decade ago, the Darth Sideous bust is more than good enough for me.
A

Agreed , the face is the problem. It's too fat , not gaunt enough. The red bags under the eyes look way too big to me. Should be looking more like crusty white pancake makeup with the crazy looking eyes. And the red shirt is missing all the texture it should have.

Face is way off. The PGM version is the best so far imo

Looks like as if E.G. Marshall had played the emperor.

I like it but holding out for a Dark Rey, if it happens. I only have space for a few more mini-busts and already have the Episode 3 Sidious but.
You must log in or register to reply here.