Figured I'd make a new thread for the KH series and change the Square thread to the FF series. 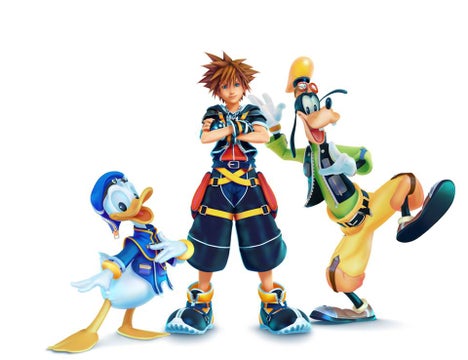 Man, this was the game that made me buy a PS3 and it never even came out for it! I just can't wait to finally play a KH game with next-gen graphics, they can do so much more now since the ps2 days. Can't wait to see how it all ends!

Kingdom Hearts III Isn't The End of The Series - IGN

I'd still like to see more native Disney properties given the treatment before recent acquisitions. The kid in me would love to ply through levels based on "Gargoyles" and "Who Framed Roger Rabbit" (which I think would work without the other studio's properties, and I just think Judge Doom would make a epic boss battle)

To add to my last post, I'd love more direct ties to the older Final Fantasy games from the 8-16 bit era. I'd love some involvement from Kefka or the Four Elemental Lords from #4.

Yeah that would be great, I'd like to see no Marvel or Star Wars crap on KH3 it would feel out of place to me. Also although its a long stretch something like Rescuers Down Under and Great Mouse Detective would be cool.

So anyone picking up the HD remix released today?

I'll get it in due time. I just got Puppeteer but once I get more money i'll be picking it up.
H

Picked it up Tuesday but still haven't booted it up!

Expect a Wait Between Kingdom Hearts III and Final Fantasy XV [h=2]"It’s a difficult job, as we want each game to be perfect in terms of quality."[/h]by Luke Karmali
September 10, 2013

Kingdom Hearts III and Final Fantasy XV aren't likely to arrive at the same time, since both games are by the same director.

That's according to Kingdom Hearts series producer Shinji Hashimoto, who told IGN that having Tetsuya Nomura as director for both projects would obviously have an impact.

"So at E3 this year we announced Kingdom Hearts III and Final Fantasy XV," he said. "Both have Tetsuya Nomura as their director, so we can’t create these two big games at the same time.


"It’s a difficult job, as we want each game to be perfect in terms of quality."

Quite how far along development is for Kingdom Hearts III isn't clear. When asked why Square Enix decided to announce the game this year if significant progress hasn't perhaps been made, Hashimoto explained that the company thought it was about time it addressed speculation about the long-awaited conclusion to the trilogy. Unfortunately, this leaves us none-the-wiser about how far along development for the game actually is, or when we may see it.

"A lot of people have wondered for the last couple of years if Square Enix has actually been working on Kingdom Hearts III; that’s why we announced it at E3 this year," he said. "But please, we need you all to understand that there’s a lot to do."

I wonder why Nomura would even want to direct two projects at the same time like this. Well, whatever comes out first will tide me over to the next one.

This Is The Intro To Kingdom Hearts III
H

Cant wait for this one either...

Now we need a release date!!

Well, we are about a month away from release!

Finished KH and about to finish up Chain of Memories. I HATE using cards for battle.

Huzzah! Finally, ready for KH3! Glad I played all these. LOTS of story that I was missing.

I was shocked at the graphical improvements from Dream Drop Distance to Birth by Sleep 0.2.

And KHIII has probably the longest intro of a game that I've seen. After playing for a bit, the KHIII logo shows up.