Hasbro have revealed Teebo will be released in the Vintage Collection:

Who will be purchasing Teebo?
B

It was always a very SLIM chance that Hasbro would actually use the "mean face" for this rerelease. Is it too much to ask that they at least update the paint? I thought that was their whole gimmick with repacks..Photoreal paint? His fur should both be darker and lighter. Maybe the face sculpt would work better if the paint was more specific instead of just dry brushed random white highlights. The animal hood should be darker and more "aged".

Was Teebo to be made available for preorder today as well? For some reason I thought he was a Walmart Exclusive along with Endor Luke Paploo and Endor Leia.

I am admittedly not super aware when it comes to Ewoks but this guy was already released in that box set from about 10 years ago right?

HothHan said:
I am admittedly not super aware when it comes to Ewoks but this guy was already released in that box set from about 10 years ago right?
Click to expand...

Thanks - I was unsure whether or not I had it. I bought that years ago at TRU, opened it and packed it away. I was not sure and it was easier in spending $14 rather than digging and looking. I want to do two wall cases in the remodeled basement, one with every vintage figure and the other with the modern counterpart.

Buzzetta said:
Was Teebo to be made available for preorder today as well?
Click to expand...

Won't be available for pre-order until later this year.
N

looks to be a straight repack. major missed opportunity here.

I have no interest in this but will get onw for the MOC collection.

Totally! Considering Chirpa is in more need of an update than Teebo was, add to the fact that he doesn't have the "mean" face and is painted too light.
Yeah totally passable...

That said, as a customizer I'm slightly compelled to buy another Ewok with updated articulation.

I got the figure in the TRU 5 pack, which is a really nice set, and Teebo is a nice figure...but I also agree, if there's a Ewok that needs an update, it's Chirpa. Granted, I DO think he still fits in fine with modern figures...he's not THAT dated IMO...but he's now the most dated. Oh the MODERN Ewoks, that is, that really BEGAN with Chirpa.


MurderBear said:
How much more cost is involved tooling a new hood AND a new head.
Click to expand...

It was around 30% of the total cost of a new figure so significant but not that significant.
They have the angry head prototyped already. If it's lucasfilm that stopped it, then that is even worse. I hate lucasfilm interfering in the toyline.

That's the kicker, this was the perfect shot to totally redeem themselves and use the alternate head instead. lol

Available for pre-order beginning tomorrow, September 9th, at 1:00pm ET at all the usual spots. See pre-order links at bottom of post. On shelf Spring 2022. MSRP is $13.99. 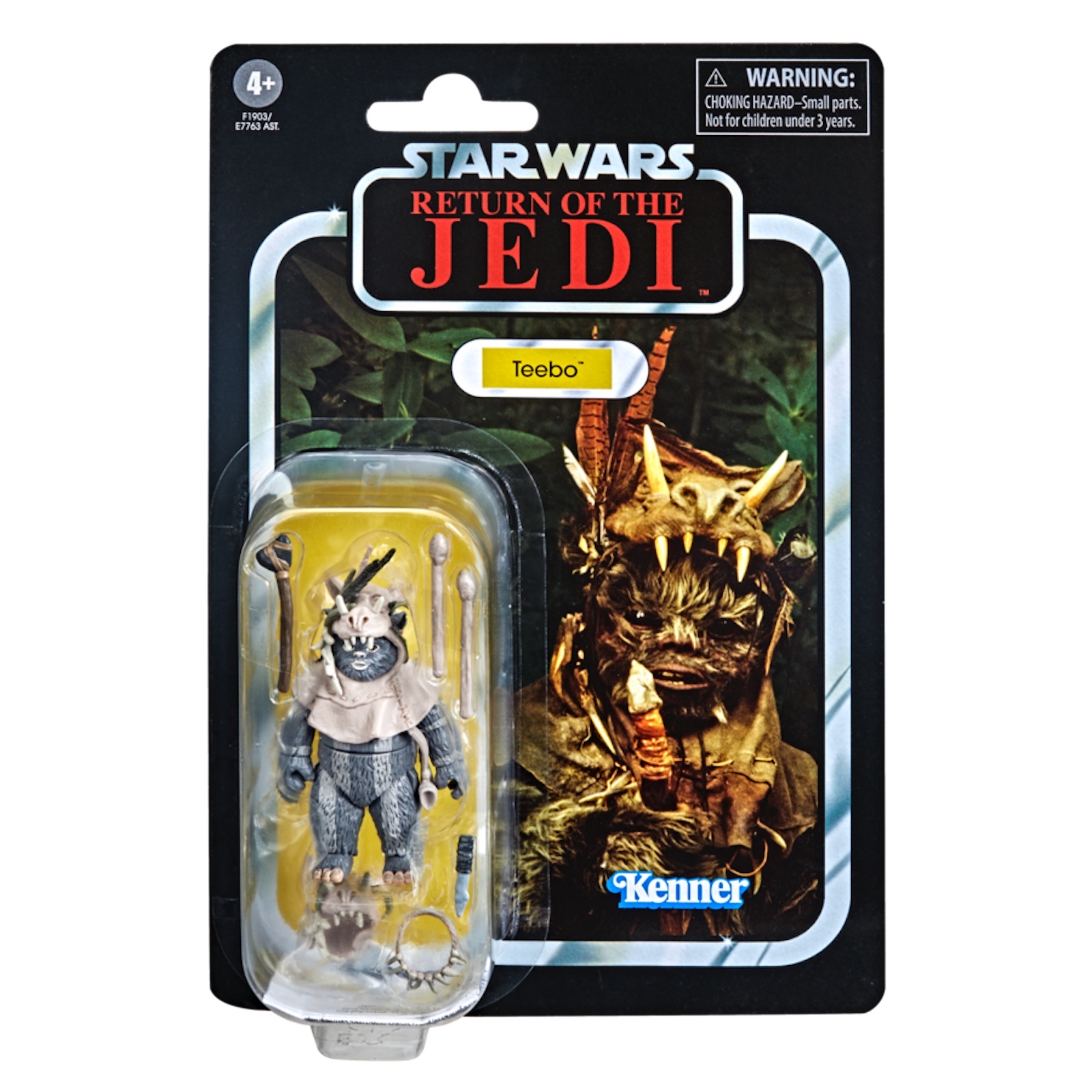 Limit of 2 per customerEstimated ship date subject to change, items may ship earlier or later than anticipated without noticePayment will be collected once item is ready to ship An Ewok scout, Teebo led the hunting party that captured Han Solo, Chewbacca, Luke Skywalker, C-3PO and R2-D2 in a... 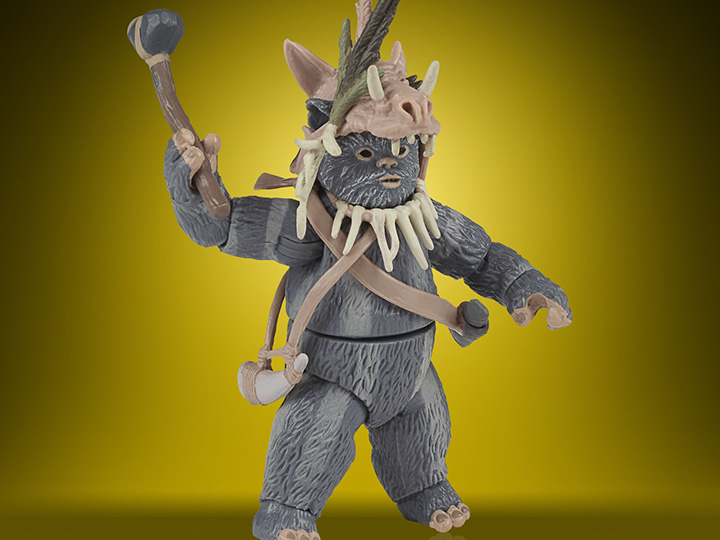 Star Wars: The Vintage Collection Teebo (Return of the Jedi) Hasbro Star Wars "The Vintage Collection" The Mandalorian (Beskar Armor) 3.75 inch action figure. From the Outer Rim to your collection!

Pre-ordered one case of wave 10, but ordered another three figures separately since he's only 1 per case.
Last edited: Sep 9, 2021

For the most part he looks like a straight repack of the TRU pack. Any word of significant changes/updates to this one - or is it just a repack?

Bantha Rider said:
For the most part he looks like a straight repack of the TRU pack. Any word of significant changes/updates to this one - or is it just a repack?
Click to expand...

If it's like the other Ewok repacks in TVC 2.0 the paint apps on the face will be a bit better but for the most part this appears to be a straight repack.
B

I don't have the battle pack one so this figure is right up my alley.
G

I already have the battle pack version so I will likely pass on this one. 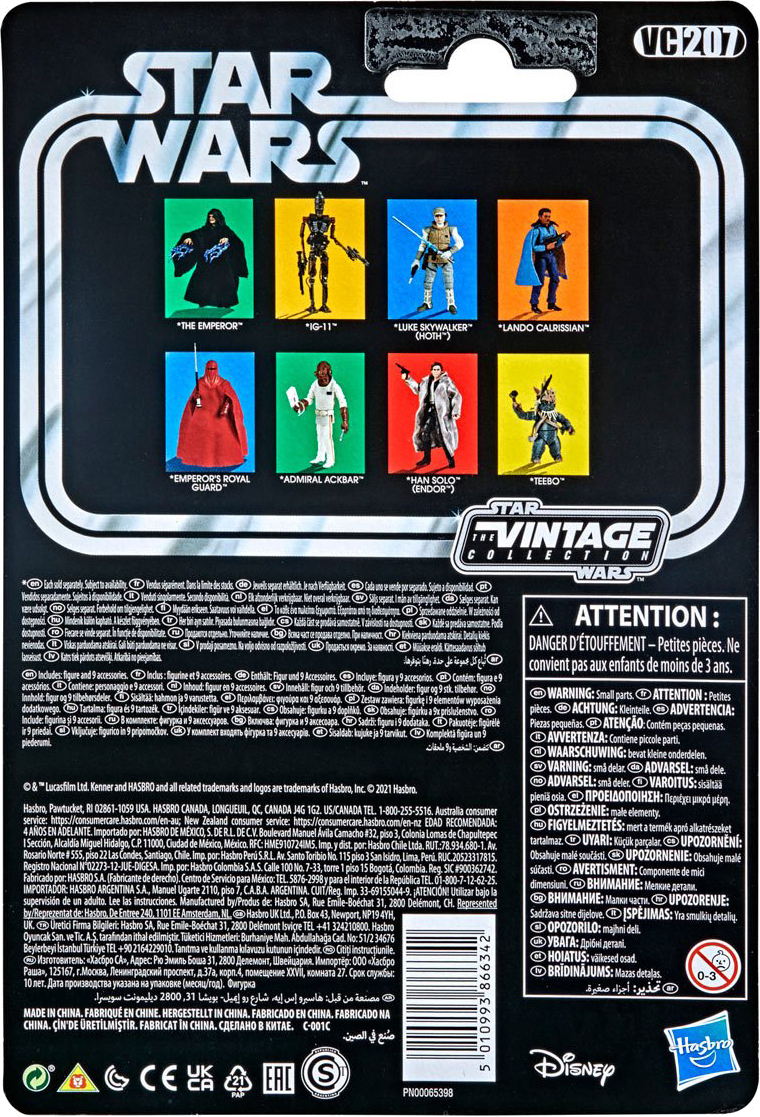 Got him in the multipack years ago, but will take the upgrade and customize the old one into one of his buddies. Thinking the pipe smoker.

I ordered one, but since I already own the first one I feel like it’s actually redundant. I mean, I can’t find an updated element to hang the hat of my decision on. I guess I’ll stand firm and see what they deliver…
D

I just wanted him for my carded collection. If they ever come up with an updated Ewok Village and or shield generator Playset maybe I would buy another to open. But I doubt rhey ever will.
N

Tulgah said:
I ordered one, but since I already own the first one I feel like it’s actually redundant. I mean, I can’t find an updated element to hang the hat of my decision on. I guess I’ll stand firm and see what they deliver…
Click to expand...

if you're an opener, now you can have one with each headpiece. that's why i ordered one.
N

also, the paint was slightly different on the updated wicket, so that might happen again here, too.

I found one at a local Walmart. Even though I have this from the TRU pack, I picked it up. At least I have a carded version to keep up with the ROTJ releases.

Looking for a MINT example of this. Don't have time to be running around to the stores and he seems to be the first to go.

Willing to trade an orange Prototype Stormtrooper but the card has to be as close to dead mint as possible.
You must log in or register to reply here.