As far as the Jabba scene goes there are a few behind the scenes things that bring more context to it.

The scene is a deleted scene, something we didn't get to see generally before DVDs made such things common. More so for older movies where deleted scenes were commonly destroyed

Lucas film is a major effects studio, & the special editions were a giant ad for their company. So using a "finished" scene & adding in new effects especially from a would have rotted away film reel is kind of a big deal for the time. You are correct it would have been cleaner to cut in some b roll, but the point of that shot was that the director didn't have to. About this time a lot of dead celebrities were being edited into diet coke commercials, so aside from the rights & legal issues ( a story for another time.) This type of shot was something very marketable for the time, side note: the idea of a celebrity being cgi into a new movie was a very real fear at the time & a big reason characters like Jar Jar got hate from industry insiders.

Now the shot in question has not aged well, along with a lot of the special editions, for the time it was well done, but cgi still had a lot to learn, They made their money off that shot as it led to contract work for other studios.

I think including it in deleted scenes as an extra type of thing is fine, but going back to try and weave it in seems illogical.

BoneFett said:
I didn't say I feel belittled. Nothing an insignificant person like yourself says will affect my self esteem.
I'm merely addressing your attempt to do so and in the process sound like a ******.
Click to expand...

This is in your head.

I mean l actually DO have some things l like with the Special Editions. It is mostly minor stuff, nothing plot oriented but more just background enhances. Like l REALLY like the expanded Bespin Cloud City. Just seeing more of the enviroment but without really altering the script itself. I don't mind the Wampa. I have mixed feelings on Mos Eisley. Some expanded shots l liked. Some just clutter the screen and obscure the scene. It feels very "Look what l can do!" gangling a shining CG object at the audience more than it really enhancing. But l like some shots. I don't hate the Jabba sequence, but like said...just think it should have been a neat bonus rather than addition to the actual cut of the film. Jedi Rock is GOD AWFUL! Not a fan of the NEW Sarlacc. I am OK with the end celebration montage in Jedi. And if they are added DVD or BluRay exclusives like "No" Vader, Hayden Spirit, seemingly Sebulba (maybe just a Dug) at Jabba's, Jango Boba voice, and a few others...l hate those.

The special edition of Rise of Skywalker set to hit Disney Plus is supposed to ret-con a ton of stuff. Supposedly Lucas is heavily involved. This may make things even worse. They had their shot to give our beloved characters a fitting farewell and they blew it, especially because Carrie is no longer with us. However I am curious, because it seems there are miles of film that did not make the cut, including a 3 way duel with Palps using a double bladed saber. Anakin supposedly has a prominent role as well. Do these things fall under deleted scene additions?

Honestly, it could make things worse. I mean, it's always been hard for me to get behind Palpatine with a saber to begin with. But undead vessel demon Palpatine? I mean say what you want about the space lightening...but at least it's more a spiritual ability. Having him go physical? That's like having Rick run into a zombie on Walking Dead that starts busting out Kung Fu moves. Nooooo thank you.

As of right now KK won’t let those deleted scenes see the light of day, but with everything behind the scenes I would not be surprised if they show up at some point.

Depends on what they retcon though, I'm a little on the tired side of seeing OT in a constant state of flux to fit some new vision.

Masterfett said:
Depends on what they retcon though, I'm a little on the tired side of seeing OT in a constant state of flux to fit some new vision.
Click to expand...

Oh God me too. I'm sick of, since 1999, seeing those masterpieces wounded.

I partially agree. I'm fine to go back and polish some FX, and even fine tune some things. I don't advocate severely altering or adding a scene that isn't necessary, like Han and Jabba. Making it so the Emperor looks the same throughout I can live with, I just didn't need a whole new dialog added.

TBH that wound isn't so bad as it could be fixed, it's just a technical wound. My gripe is changing what we've known for years as Canon , but now has a slightly different feel. Though I get that a lot of my Canon was formed by EU, doesn't make it any easier to let go to an idea.

^
Speaking of which, has there been any news on whether we'll see the unadulterated versions on Blu any time soon?

I optimistically feel they're already working on it, it was just a matter of time before the FOX issue was resolved. While we have heard that the original master is gone by being re-edited, I don't know that I can fully believe that. Even George wouldn't destroy the original, you always keep the original master copy in case something happens.

I would suspect that if anything it will not arrive at least until Holiday time to cash in on those sales, plus they're focused on other things right now media wise. So they won't so anything to take attention form that. Also with what's going on right now a lot of stuff has been put on hold, so it likely pushed this project out as well. So the next logical date would be May 4th 2021, or the following Holiday.

If we're being optimistic.

Yeah agreed the technical and cosmetic stuff doesn't really bother me either. I mean if it doesn't actually tamper with the story and pacing, tone of the scene, or feel like just a sort of attention ***** grab to show off new effects toys, I'm usually fine with it too. I mean the Ewoks blinking is a good example. It's utterly stupid and a waste of money, but I don't really CARE. 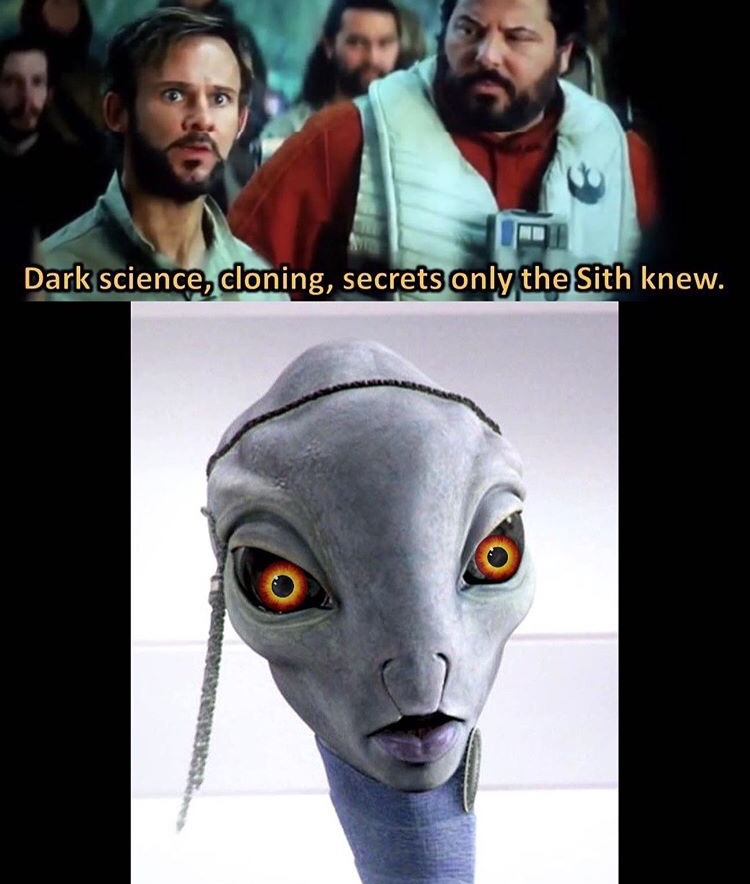 Fast paced, non-stop action, couldn't bring myself to even push pause and grab a second drink. This film is highly underrated, it's certainly the best of the sequel trilogy and really manages to pull the whole trilogy and saga to conclusion. Much more George Lucas-like than 7 and 8, wouldn't be surprised if he actually had a heavy hand in it. One of the best of the films imo.

Studying the ending one more time, I can't help but notice how Rey reacts to Kylo's death at first moment with silence a slight smirk of sorts... a brilliant ending. Looks like the good guys win, but certainly leaving the door open for a Rey-Palpatine possession sequel of some sort, if they choose to go that way. She completely forgets his flat-out-stated only goal is for HER to kill HIM in the battle, which she does...
J

It is indeed fast paced with non-stop action. And it has a lot of energy.

Unfortunately the action is not very good.

The desert chase sequence is nothing original. They go from here to there with nothing in between.

There is no shoot out in the rescue of Chewie - they are running with the troopers walking into their line of fire.

The lightsaber duel is again nothing new and only looks good because if the water.

Ben vs. the Knights - nothing happens. They hit him a couple of times and then he kills them. They barely even move to avoid the lightsabre.

And the space battle - again nothing happens. The fighters buzz around making no effort to take on the Star Destroyers until the back up arrives and even then it is just a few fighters taking out a couple of Destroyers. The big ships that cane to help just stay in one place. I don’t think the back up even did anything.

The cavalry charge on the hull of the Star Destroyer was such a class idea - how does it not become they most epic action sequence of the franchise. Of cinema? Nothing happens.

They ride the space horses, the bad guys come in ships - and what? A few pew-pews from afar and that is it?

The film had two good points - Chewie’s reaction to Leia dying (which does not make up for messing that up about Han in TFA) and Threepio’s “one last look” which gets completely nullified when the cameras remind us of the shower of ding dongs that he is talking to.
Last edited: Aug 23, 2020
You must log in or register to reply here.
Share:
Facebook Twitter Pinterest Email Link
Top