BILLY!!!! Man, I thought everyone from our old local collecting group had dropped off the face of the earth! LOL I've been out of collecting anything for a good long while, but knew I was getting these retro figures as soon as they were announced.

Which Target is Alamo Ranch? I picked up the board game with GMT at Target Austin Hwy on Weds. They had five in the back, I picked up one. Headed to the RIM area tonight, so I'll check there for the figures.

Jimmie! Damn dude, it's been a loooong time!

Alamo Ranch is the one at 1604/Culebra. I'm heading over that direction tomorrow, I'll keep an eye out.

Thanks, man... I appreciate it. I was shot down Friday night at Target at The Rim. Kinda felt bad after the electronics girl told me they were street dated. I told her, well so are the Black Series Luke Stormtrooper's they had on the pegs (3). She said, hmm... scanned them and pulled them to the back. LOL

I thought I read the street date for the Retro figures was lifted. That sucks! Pretty sure people have reported being able to buy them.

I'm looking for that Black Series Luke Stormtrooper...glad to hear he is at least in stores.

Boba77 said:
Haven’t heard anything about Clone Wars Obiwan yet. I’ll check the system tomorrow to see if he’s in there and if there’s a release date. 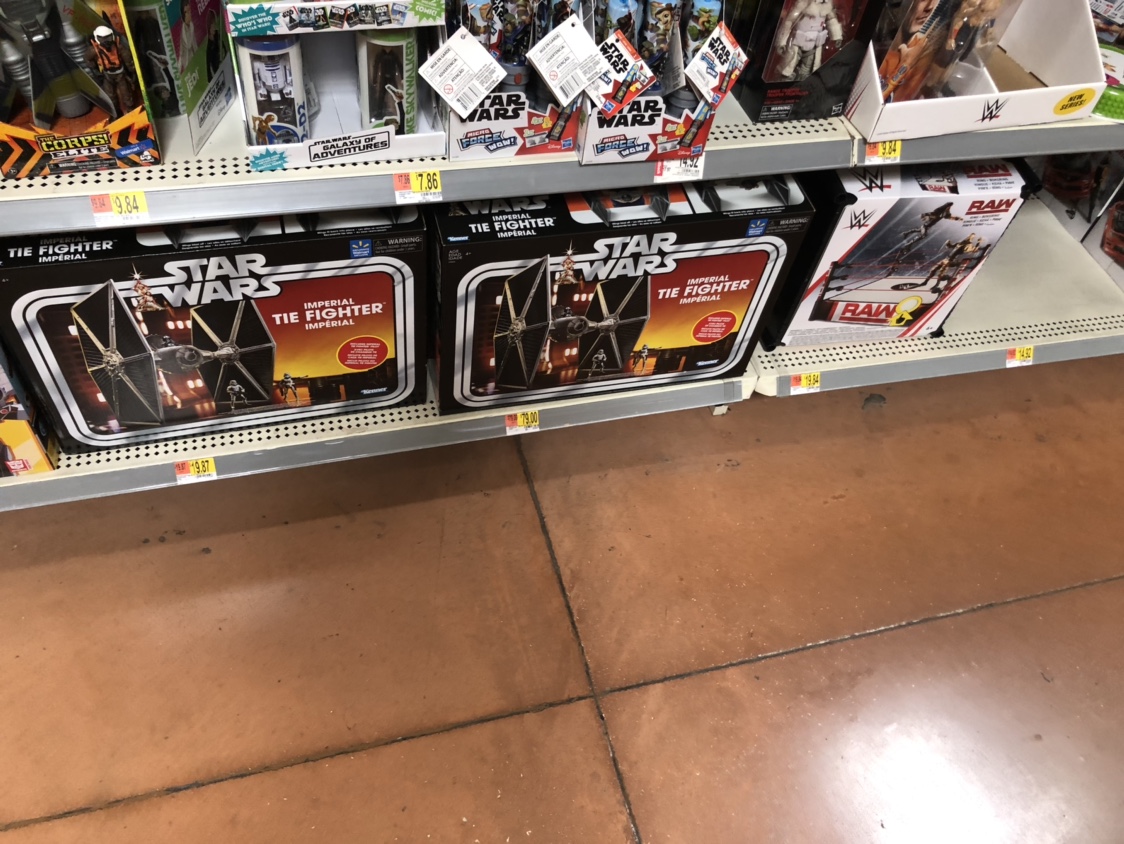 Walmart Potranco has the imperial tie fighter for $40? There’s no clearance tag but I scanned it and it says $40.
Click to expand...

They are now marked down to $19.99! They had three left this afternoon, I picked up one. They moved them to the top shelf above the LEGOS for some reason...I almost walked away empty handed, but went back and looked again.

Billy_Ray said:
They are now marked down to $19.99! They had three left this afternoon, I picked up one. They moved them to the top shelf above the LEGOS for some reason...I almost walked away empty handed, but went back and looked again.
Click to expand...

Nice! I hope I find one for $20. I stopped by Gamestop in AlamoRanch and saw a Black Series Boba Fett yesterday. 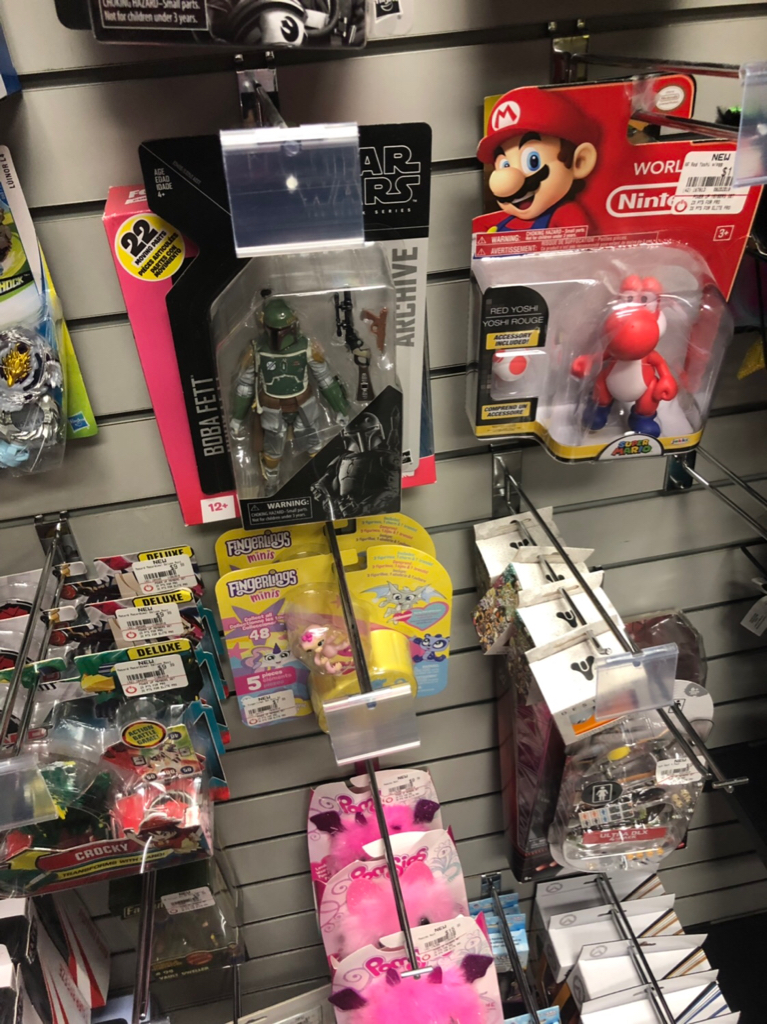 Brickseek is still showing two at the Potranco store

I stopped by the Potranco store this afternoon and the TIEs weren't where they were the other day. Not sure if they moved them again or they sold and Brickseek just hasn't updated. They may have moved them to the clearance section I guess, I didn't check there. Brickseek was also showing two at the Walmart on 1604/Culebra.

Billy_Ray said:
I thought I read the street date for the Retro figures was lifted. That sucks! Pretty sure people have reported being able to buy them.

I'm looking for that Black Series Luke Stormtrooper...glad to hear he is at least in stores.
Click to expand...

It's the typical situation where some stores across the country care about the street date, others don't. Of course, all the ones I've been to do care and shut me down as soon as the info comes up on the DPCI... as was the case at Forum Target today. Guess I'll try to get there early tomorrow and see if there are any left.

I'll keep an eye out for that BS Luke Stormtrooper, as well, in case you can't find him on that side of town.
Last edited: May 11, 2019 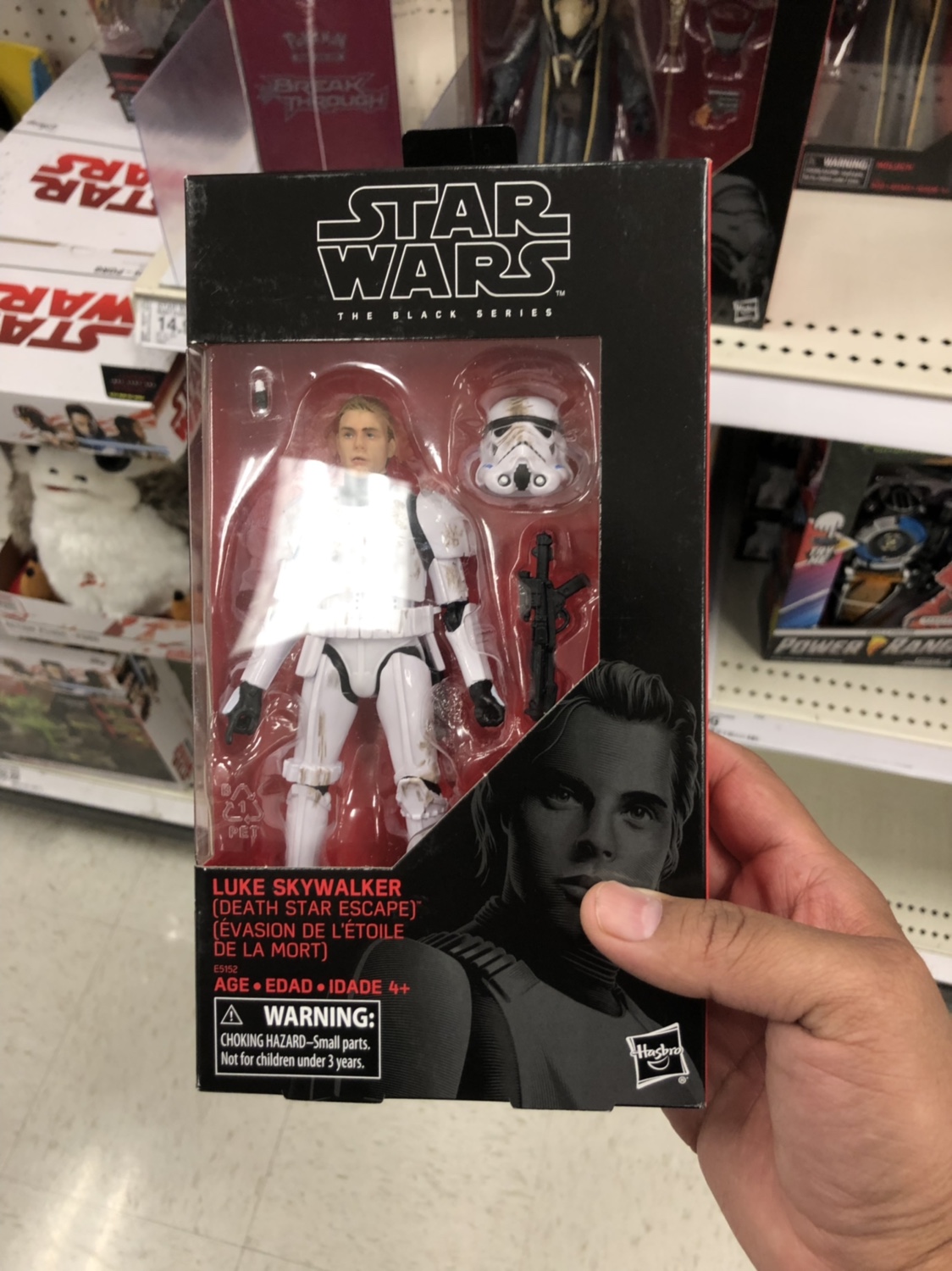 found 1 Target exclusive Luke at Target AlamoRanch today. There was only one there.

Glad to see they are finally putting the new stuff out. I still need him and am also looking for the TVC Han Stormtrooper. Can't really say that I have been HUNTING them...I've been pretty busy lately but I did stop by a couple of stores.

Managed to grab both the TBS Trash Compactor Luke and TVC Han Stormtrooper today at the Target on SW Military. They also had a set of the Retro Vintage figures. If you are looking at Target, be sure to check the Men's Clothing section. They had a display up for Father's day that had Star Wars stuff. That's where I found the TVC Han.
O

Thanks for the info Billy. Been looking for Han and the board game. Hopefully I'll track 'em down easily, thrill of the hunt after all.

Forgot to mention that they also had the board game. It was also in the Men's Clothing display. I did see them at the 151 Target as well, they were in the actual board game section.
O

It's bizarre to say the least how odd the choices are to either put out the toys in separate areas or not put them out at all. I went to Target at the Forum off 35 this morning when they first opened. No display, nothing. I checked the men's apparel department, seasonal and the toy section. Had to ask a kind employee at entertainment to check if there was Han or the board game back there. She came back with two Hans, just what I was after.

Next is the board game. Sure I can just order it online but I've had so many difficulties with Walmart already that I don't want to go through the hassle with a different company. Sure Target may be more reliable but that just takes away the thrill of the hunt.

Did you check the actual board game section? I saw them there at the Target at Alamo Ranch
Last edited: May 23, 2019
O

I'll check there next. Seeing as how Father's Day is closer than the initial release date, I'm sure we in Texas will finally see the product hit the shelves. We always seem to get everything everyone east and west of the US gets a month later.

Saw a whole bunch of the Escape from the Death Star game at the Alamo Ranch Target today, also in the board game section. Plenty of TBS Lukes and surprisingly a whole lot of the TBS Solo Chewbacca as well. 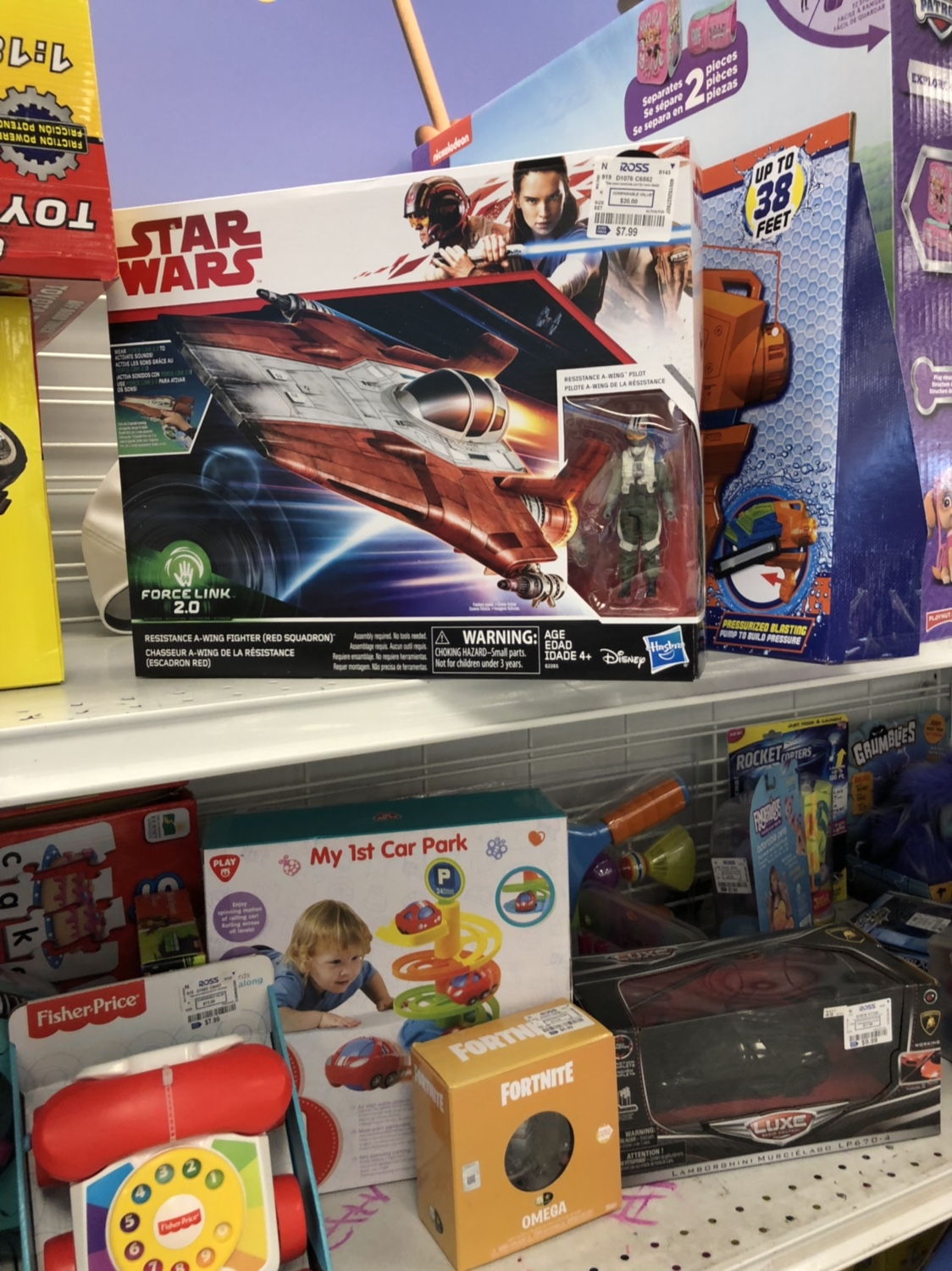 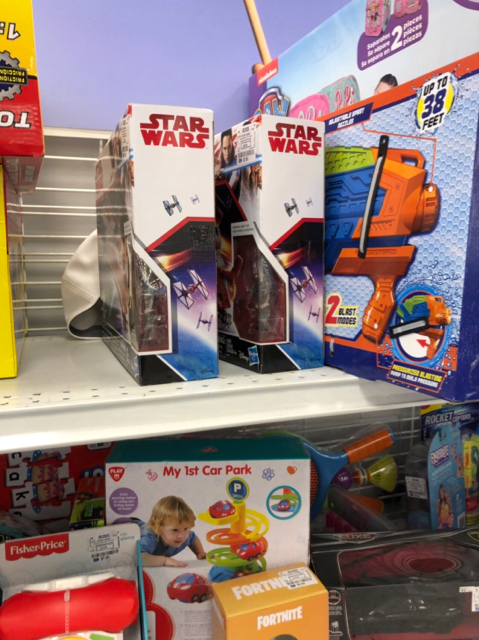 Picked up five more Stormtrooper Hans and finally saw the board game. They are littered all over the place now.

Nice. I've been looking for more Stormtrooper Hans. Haven't seen any on this side of town since the one I got.

Just saw a report on Yakface that the Obi-Wan/Chopper/Ezra/etc wave is showing up at Gamestop.

Hit up Gamestop on SW Military and the one on Potranco. No luck with the new wave. Potranco store did have the Holdo wave, minus Mimban Han. Haven't seen that wave in a while.

Also picked up two TVC Stormtrooper Hans at the Target on SW Military. they had about 10 on the pegs.

Just read on Yakface that Wave 2 of the Black Series Archive figures (Anakin, Yoda, Maul, and Biker Scout) were found at Target in CA.

Wave 2 Archive figures have also shown up in Houston and are apparently also hitting Walmart as well as Target. I stopped by the Target on 151 but they only had wave 1 Luke and Bossk.


Billy_Ray said:
Wave 2 Archive figures have also shown up in Houston and are apparently also hitting Walmart as well as Target. I stopped by the Target on 151 but they only had wave 1 Luke and Bossk.
Click to expand...

I found archive wave 2 at Target AlamoRanch. I bought one of each and left one of each.
Last edited: Jun 13, 2019

Thanks again for the tip! Can't believe how much better Anakin and Yoda look!

Billy_Ray said:
Thanks again for the tip! Can't believe how much better Anakin and Yoda look!
Click to expand...

No problem man. Let me know if see chopper, obiwan, or Ezra from the new wave.

Definitely will. Unfortunately reports only seem to be of 000 and BT whatever so far.
O

Billy, did you find any cheap TVC Stormie Hans on your end?

I did! I picked up two at the Target on SW Military this afternoon. Both had crushed bubbles (which is probably why they were still hanging around) but I am an opener.
O

Sweet man, nice score! I was lucky to bump into the few Targets around my area managed to put out. got seven in all. Good luck on your Black Series hunts!

Spotted Dr. Aphra, BT-1, and 000 at the Gamestop on Potranco this afternoon. Left with none of them. Dr. Aphra actually is a great figure, I almost picked her up, but I honestly have no interest in these characters. Hopefully the rest of the wave isn't far behind. 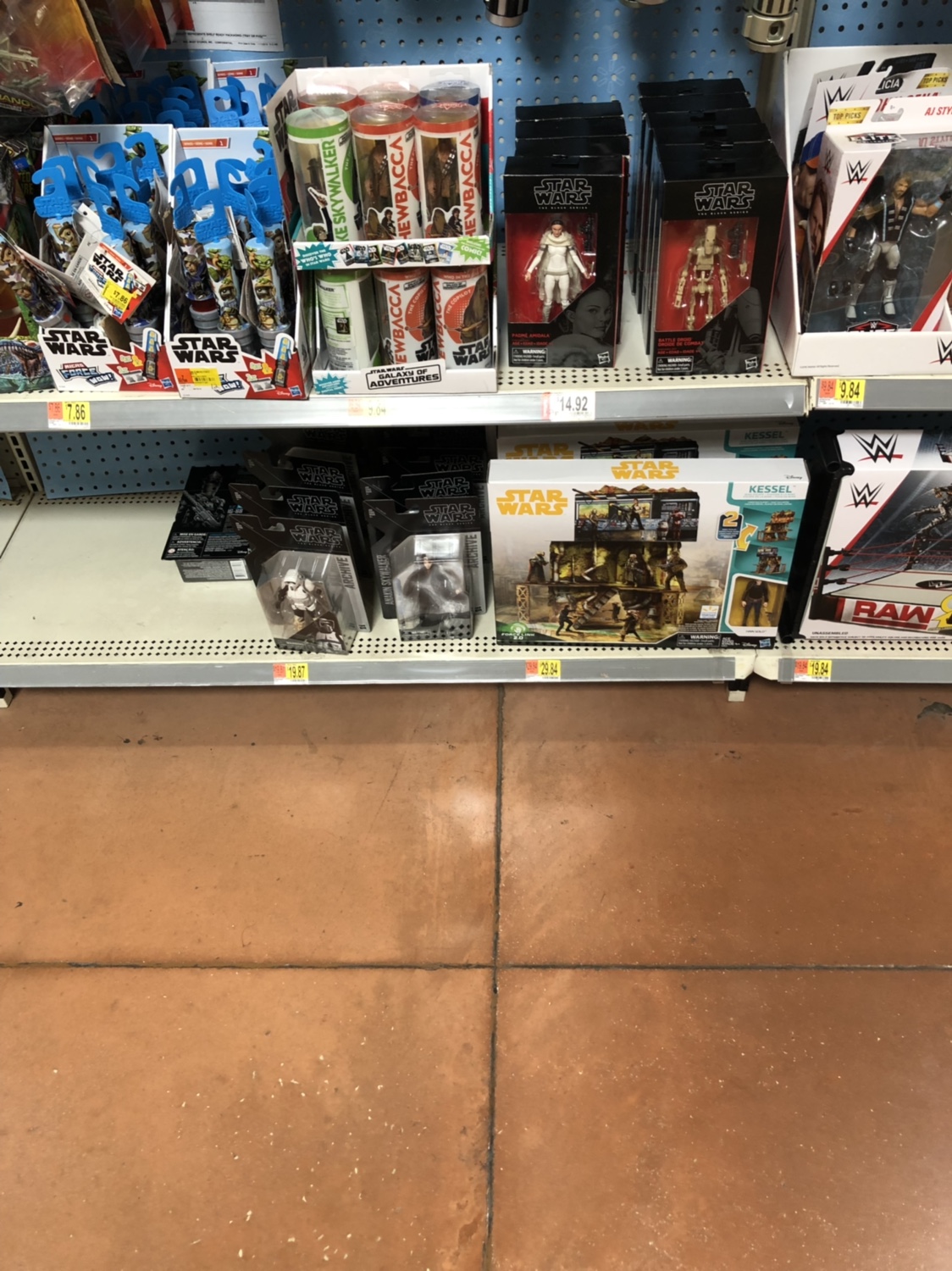 Stopped by 4 Walmart’s today. All of them had the episode 1 wave for $14.92. This picture is from Walmart on Potranco & 1604. Which was the only one that had archive wave 2 sorry those were ringing up at $19.99. Let me know if anyone finds a Mace Windu in their travels. 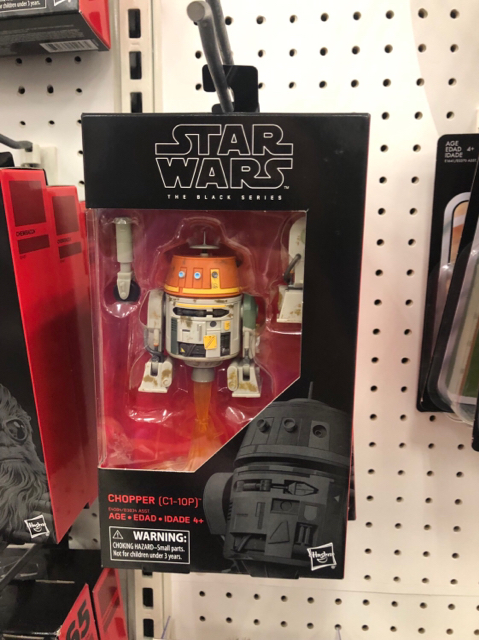 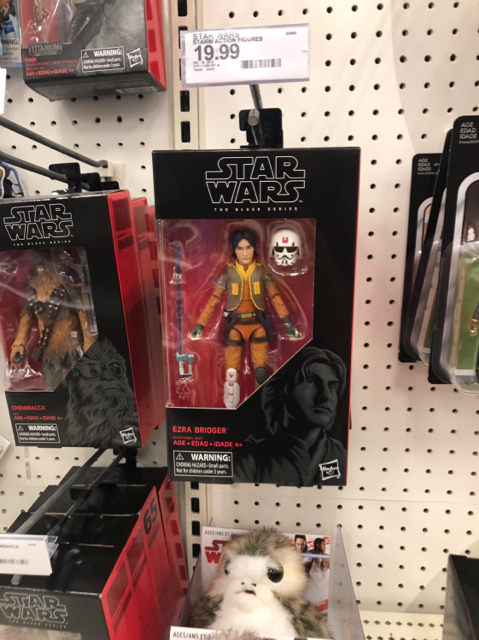 Target AlamoRanch, that’s all that was left I bought both.

Ah, ok. Good to know these are hitting Target, gives me some place other than Gamestop to check. Still need Chopper and Obi-Wan. I pre-ordered Obi-Wan at Gamestop, but I haven't had a whole lot of luck doing that in the past.

Billy_Ray said:
Ah, ok. Good to know these are hitting Target, gives me some place other than Gamestop to check. Still need Chopper and Obi-Wan. I pre-ordered Obi-Wan at Gamestop, but I haven't had a whole lot of luck doing that in the past.
Click to expand...