Looks good. Portrait is good and nice battle droid base. I'm not sure about his outfit though...they went with what looks like a corduroy texture to his clothing and I'm not sure that's correct. I think the epIII mini bust was more accurate in that regard.

Face sculpt is decent. The base is pretty cool and the sliced battle droid is a nice touch. The only real downside for me is the texture of his tunic is really overdone to the point it looks more like a really thick bathrobe than a Jedi tunic.

It is hard for me to say no to Kenobi, especially PT Kenobi and I love the base.

Got the Death Trooper, held off on Kenobi for now.

Not bad looking. At least they didn't stick any smoke affect or flames on this one.

I don't collect this scale but a decent offering from GG

SpecialOpsUnit said:
Got the Death Trooper, held off on Kenobi for now.
Click to expand...

Same here. I ordered the Death Trooper directly from GG, but I will wait and order Kenobi through my local retailer.

Not for me. Not a fan of the funky bases.
B

I just can’t afford these any longer. Anything over $200 I’ve been out on.

I agree with comments expressed above. It's a nice sculpt, nice likeness, but the texture of the robes is off. Here is an insert from StarWars.com on the actual fabric used for the Jedi outfits:

Costume designers have worked for decades on Jedi apparel: first, with Obi-Wan Kenobi in A New Hope, and most recently with Luke Skywalker’s ensemble in The Force Awakens and so on. Designers such as John Mollo, Aggie Guerard Rodgers, Trisha Biggar (who wrote Dressing a Galaxy, a costume encyclopedia that is still one of the best go-to’s for in-depth cinematic costume research), and Michael Kaplan are just some of the stand-out creative minds that have brought the fashion of our favorite galaxy to life. For the Jedi of the Republic era, costumes made of wool provided form and functionality. The actual dressing rooms of the cast that made up the Jedi Order were full of fabric. Made from silks, linens, and some very special vintage wool from WWII-era British Army Surplus blankets, the robes often called for several replicas due to the fact that when the wool got wet, it shrunk. You can imagine what a headache this may have been during Attack of the Clones, in which actor Ewan McGregor somehow finds himself soaked with water for a good chunk of the film, including a fight with Jango Fett in the pouring rain. Needless to say, the costume departments of the prequels bought those wartime blankets in bulk, and Trisha Biggar created quite a few replicas from a different, lighter type of wool for Obi-Wan.

That being said, the corduroy texture of his robes is contrasting against the smooth appearance of his pants, thus creating more visual attention and separation. Maybe that is what the sculptor was looking to obtain: a more noticeable, catchy look. But, as others mentioned, the texture of the fabric is too thick and inaccurate.

I agree that the fabric detail is a bit too exaggerated in the sculpt, but this is always the case in scaled products, it’s a trick to make it appear like the original.
Some of his robes in episode 3 were indeed ribbed -

Lol, like you guys, it’s the corduroy that does it for me. Other than that, it looks good. I don’t do the large statues though

I'm just glad they've touched the PT with a statue other than Maul, and if there's still a chance to smooth out a bit the extreme look on the ribbed fabric, that'd be great. A Qui-Gonn statue would also be nice, as well as a Mini Bust sporting a better pose than the only one produced so far. I'll probably get the statue, although all my PT collection is in storage due to lack of space for now.

And an animated maquette too please. 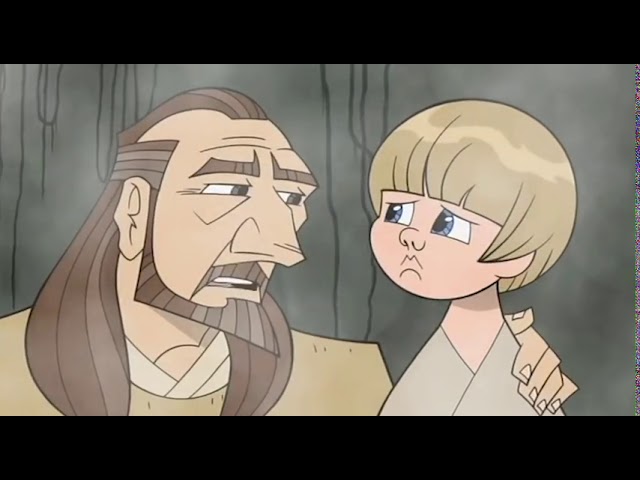