I had a general collecting question that I've been embarrassed to ask since coming to the forum. I should explain the embarrassment comes at the hands of me being an ROTJ focus collector and this being an ROTJ question.

A long time ago, around the time I started collecting, I picked up the first version of the Tomarts Price Guide. Since this was Pre-Internet days (at least for me) it was really my only gauge as to what had been produced in the Kenner Toy Line. By the second edition I had figured out a general direction for my collection and started to pinpoint a few items that I would like to find.

Two of those items are listed on page 201 of the Blue Tomarts Guide (soft back), they are items TO1425 and TO1427. Basically this is the continuation of the 3 figure pack style that was used for the ANH and ESB lines. However you can notice that it differs by not having bubbles around the individual figures like the previous lines.

I have never seen these in any other publication, nor can I verify that they were actually produced. The best thing I've ever been able to find (outside of the pictures) is a mock up three pack box prototype.

But the absence of examples/additional documentation leads me to believe that these were never actually manufactured and what Tomart pictured was mistakenly a prototype vs. a production item, thus it shouldn’t have been listed.

If anyone can help with information about these items or I would love to hear it.
T

For what I know Tomarts listed some items in their guide which are unproduced or one of a kind to see if someone else would use their information and or pictures in another publication. maybe that's the case with these mock ups?

You're right that ROTJ three packs were never produced. They were pictured in the 1983 department store catalog: 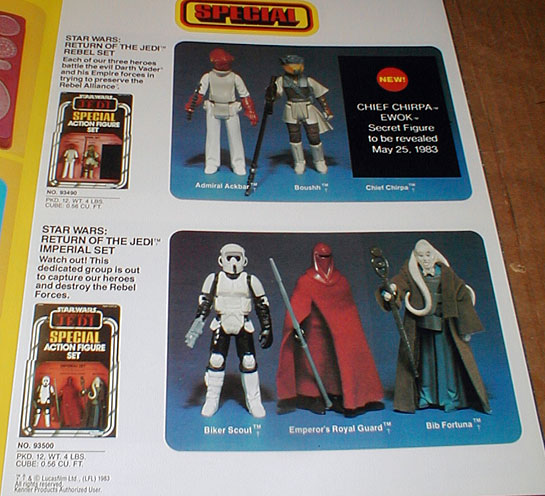 and possibly another kenner dealer catalog, but I'm not sure which one offhand. I don't know that the mockups exist in any collection, but if they do, they're not publicly known.

I can't find it anywhere, but as I recall, there was some debate over whether their inclusion in the tomart books was on purpose or a mistake. Maybe another old timer can elaborate where my memory fails.

There was a thread on this a few years ago and like John stated the inclusion in the Tomarts book may have been on purpose....


wooten said:
I can't find it anywhere, but as I recall, there was some debate over whether their inclusion in the tomart books was on purpose or a mistake. Maybe another old timer can elaborate where my memory fails.

The thread is here and it goes some way to explaining their inclusion.

Wow, the picture is excellent, thanks for providing, I hand't seen that before.

And thanks for link to the old thread mate!


These would have been great items to come to fruition.

I never noticed those two in the Tomarts Guide before. Well maybe it's because I'm a collector of loose variations, I didn't pay attention to those two beauties.