Oh you said Kleenex, my mind read Kenner. Lol. Still, the idea to customize could work if one has a scanner to scan the Kleenex boxes lol
J

This is True, I'll have to keep an eye out for some old cases.

My Five Below has 4 pegs stuffed with 12-inch Andor and Erso. Yikes.

Somebody really overestimated the demand for them.... 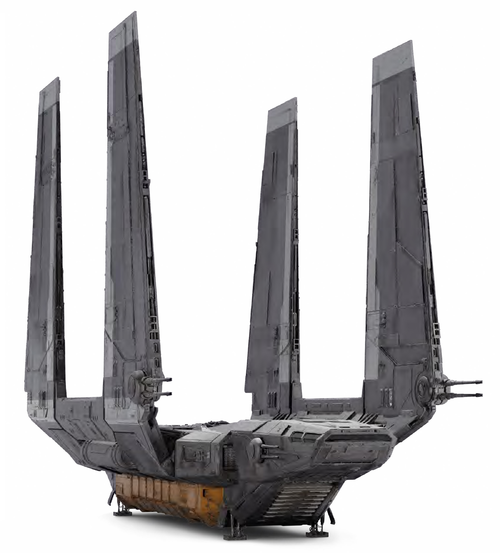 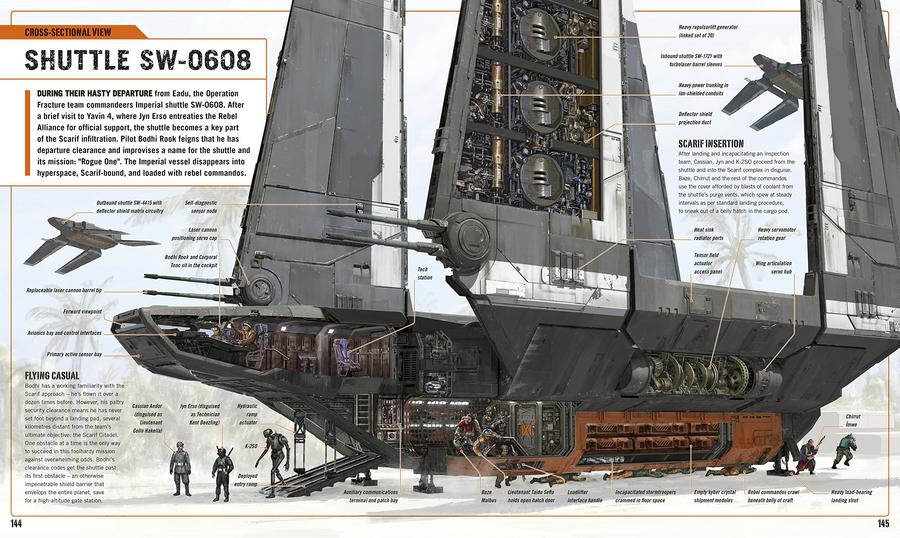 Not the U-Wing, but the stolen Cargo Shuttle, is arguably the definitive ship of the Rogue One crew, as it is when they steal away in it, to defiantly take on their mission to bring hope to the Rebellion, i when they take up the moniker Rogue One.

Of course a ship this scale would never be built, but looking at the details, it's actually smaller than I thought. So I'm curious, just hypothetically (we know it will never happen), with a massive scaling down and stylizing, yet not as off as the U-Wing, what minimum size would it take to have a somewhat satisfying version of the Rogue One Cargo Shuttle?

The image above shows two pilots in the cockpit side by side, taking that as the minimum functional starting point, what scale could you pull off, to have a satisfying ship.
The vintage AT-AT could fit two pilots in the head/cockpit, and had a large hull (although obviously the R1 Cargo Shuttle would be flatter and wider then the AT-AT), could you fake the two levels into one and split the difference, and I guess imagine the AT-AT's legs flipped up, to somewhat mimic the height/scale of the folding wings of the Shuttle.
Would that be enough?
Or would it at minimum have to scale up to at least the AT-AT Legacy Collection scale?
Could it work roughly about the size of two vintage Imperial Shuttles end to end?

Not really asking if you are a fan of the ship (aka the flying sea-turtle) or not, assuming you were, could you imagine satisfyingly pulling off the R1 Shuttle at either of those scales? Yes No? In Hasbro's prime, could they pull something like that off ? Would it have to be much bigger?
Any thoughts?
P

Hasbro could definitely do something like that. Would they? Probably not now.

I think about Republic Gunship sized wouldn't be TOO bad, although obviously underscale.
R

Imperial assault tank question: Why is this thing so expensive? It is going for pre-order on EE for $70.00. Is this a normal price for a vehicle of this size? It isn't even that big.

If the shuttle were wide enough for 2 people side by side, & maybe underscale it to 12-16" long with de-attachable wings for storage/shipping. We could get a very decent ship.

Granted I don't think we would ever get the 2 levels, but if its big enough & a kid could still fly it around, it would be a fun toy.


Rock said:
Imperial assault tank question: Why is this thing so expensive? It is going for pre-order on EE for $70.00. Is this a normal price for a vehicle of this size? It isn't even that big.
Click to expand...

Hasbro wants to make their money while they can. While they have the contract to make SW toys (till 2020?) that may go away as Disney is known for contracting out toys to different companies. (See: Build a droid is no longer Hasbro molds even though Hasbro designed the 3.75/4" scale line & designed the original build a droid molds.)

Canucks! Dollaramma has 2 waves of R1 figures ($4.00 each). The Krennic wave and Bodhi wave. As each store has different stock, it is possible that other waves might be out there.

Was looking at some of these just today, and gotta say that Galen Erso figure didn't age well at all! Totally crap face/head sculpt, and the uniform lacks serious detail.
I love Imperials and would have liked this guy, and Krennic, to get SA treatment.

Were there any known, unreleased Rogue one figures that were pulled?

Picked up the Stormtrooper/Baze Malbus 2-pack for $5.99 at Rose's, a bargain outlet here in south Mississippi.

Spotted a Sgt. Erso and a Jaaku Rey at Bealls Outlet yesterday for $3. Didn't have either so I took the last two dusters they had.
I

Been trying to track down stormtroopers at Dollar Tree, managed to find one after going to about 40 stores! Plenty of Jyn, Cassian, Rey and even Krennick. If anyone wants to snag me Stormtroopers for trade or to sell let me know!

Gonna have to check Dollar Tree in the morning. Sounds like a good deal to stock up some for salvation army.

Anything In NE Ohio yet?
I

I’ve managed to get 2 stormtroopers. Was hoping for more but quite a few stores in the Boston area did not get these.

No Stormies at mine, but lots of Jyn and Cassians. I was hoping they'd have an Imperial Galen

5 unopened cases sitting on the floor in my town's disaster of a Dollar Tree store today. 5 stormtroopers went home with me for $5 and change. Felt great.
I

^ Ugh! You lucky SOB. We barely have any showing up at stores. 1 of every 10 stores actually has them!

indysolo007 said:
^ Ugh! You lucky SOB. We barely have any showing up at stores. 1 of every 10 stores actually has them!
Click to expand...

You know, those cases were actually sitting there two days ago. I gave them two days to put them up, and they were still on the floor today, right where I'd last seen them. Decided to help myself, and nobody minded.

Yes it's hit and miss in my area too. You can always tell which stores are carrying them by them remnants of Rey and Jyn.

I saw Jedha Revolt 4 packs at Tuesday Morning for $10.
I

Fate said:
You know, those cases were actually sitting there two days ago. I gave them two days to put them up, and they were still on the floor today, right where I'd last seen them. Decided to help myself, and nobody minded.
Click to expand...

as far as I’m concerned, if they aren’t going to stock shelves, I help myself to any boxes. Walmart puts huge pallets out at night yet never stocks the items. I open those too.

At a buck a pop, its really hard to pass up on these - I limited myself to two figures though. I picked up Krennic, which I immediately converted into a generic ISB officer w/ with a new head and black cap. I also picked up Vader, because its a unique sculpt which I previously passed on. I then browsed my collection, and I believe this is the 20th masked Vader in my collection! That of course is not just movie figures, but EU, comics, video games, animation, etc. I left everything else, including the Stormtroopers - I suppose I should have bought those to trade or donate. I went back a couple days later, and only 3 Jyn figures remained - note to Hasbro - never release another Jyn figure, they don't even move at $1! ;p I checked another store while out shopping, and found four cases torn apart, lying on the floor with the Stormtroopers missing...lol...
I

I’ll buy the stormies off of you or trade! Anything you need? They’re being carried in so few Massachusetts stores
I

And to your other point, this was Tuesday morning Store yesterday, some rows were several Jyns deep

indysolo007 said:
And to your other point, this was Tuesday morning Store yesterday, some rows were several Jyns deep

Looks identical to my local Tuesday Morning in FL.

indysolo007 said:
I’ll buy the stormies off of you or trade! Anything you need? They’re being carried in so few Massachusetts stores
Click to expand...

I didn't pick any up, when I returned to the first store they were gone - at the second store they were cherry picked out of the cases already. If they restock with more, I'll pick some up though.
I

That would be appreciated! As much as 5Poa isn’t my favorite this is a quality figure that looks amazing in a display. Hearing they were being found for $1 was amazing, actually finding stores carrying the product is another story. Pretty much sums up my hunts lately.
S

I have little hope to find any figures at my local Dollar Trees. I recall a while back people reporting they found Black Series Titanium die-cast at Dollar Tree, but I never found any trace of them at ell. Not even a single leftover.

indysolo007 said:
And to your other point, this was Tuesday morning Store yesterday, some rows were several Jyns deep
Click to expand...

That should be an official unit of measurement for retailers.... e.g. Those old Minions 2 beach towels were stacked several Jyns deep.
I

Picked up a Princess Leia and a Rey, Also saw some Cassians and Chirruts, but don't need them. Found stock at one store out of six Dollar Tree stores I checked. Checked a Bargain Hunt store and they had lots of TLJ figs at $3! Only want those for the build-an-accesory pack ins though...
I

I hit up 3 tonight. Still no sign of them at these locations. 1 of 7 in my area received them.

Ok, checked another store and found Vader and a couple Stormtroopers which I bought. The Stormtrooper helmet is perfection; I ended up using them on 2 SA versions. Would anyone want the bodies for cheap? I may get one more I saw there next week if it's not gone.

Can't edit my earlier post. The other figures I found at Bargain Hunt were from The Force Awakens. Maybe I could keep the movies straight if they were a little more memorable....:wtf:
I

So, THAT'S where they all ended up! Ollies. I didn't even try to count them. I may swing back and get another 1 after X-mas. They usually do a 50% off toys sale.

I'm sure there'll be some left.
S

Trooper31 said:
I'm sure there'll be some left.
Click to expand...