Picked up a lot of six figures, 8 commtech chips, reader and a few other bits for a whopping $5.

Among other things I picked up a destroyer droid. The Episode 1 version is my favorite.

Am I missing the Hasbro classifieds section, or is that no more? I was looking for a few things to complete the collection, Fambaa and the Theed playsets....

Saw the R2-B1 the other day. Gotta be one of my favorite figures in this line.

Got a Watto from the Watto's box cinema scene. I prefer the downward wings but am pretty disappointed in the rubbery legs. I can't really get him to stand straight. I guess he's getting displayed at the back of the shelf, lol.
M

Got the R2 carryall playset from my wife a couple weeks back. Obsessed with it! Taken lots of toy pics in it already using it as a couple different settings (eravana for example).
H

TC-14 is now finally FINALLY on my loose display with my E1 figures. What a great figure. Love her next to R2-B1. Love the tray and thermos accessories

As i attempt to fill some holes in my collection I am in search of the Naboo Royal Starship.

Picked up a Naboo accessory pack, for the robe.

Found a not overly-optimistic-priced seller on ebay and picked up loose figures of Boss Nass, Chancellor Valorum, Pit Droid 2 pack, and Sio Bibble.

Recently picked up the two-headed announcer from the Episode 1 Jabba set. This announcer is not to be confused with Fode & Beed, the actual character(s) from the film, that were released later. Technically, I think this announcer is a concept figure, because its based on deleted scenes, where live action actors were originally slated for this role.

Been after this one for a bit but wasn't prepared to pay stupid money for it. 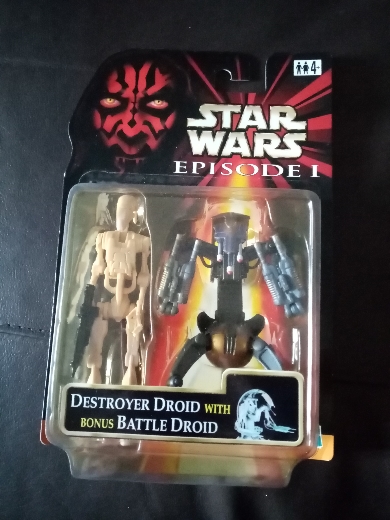 Sent from my MRD-LX1 using Tapatalk

Been after this one for a bit but wasn't prepared to pay stupid money for it.

commanderbacara said:
Been after this one for a bit but wasn't prepared to pay stupid money for it.

Sent from my MRD-LX1 using Tapatalk
Click to expand...

Sweet, how many more you need? I think I am only missing two or three.
J

I believe I am only missing the R2 flat bubble and three battle droid variants.
T

These ones arrived today. Watto was on the most wanted list

Great to see people appreciating older figures - Watto is certainly an underrated figure, I think he's easily one of the best from the TPM lineup. Excellent sculpt and maybe the best deco on a figure from that assortment.
J

Just scored this 2" Naboo fighter and figure set. I believe these were numbered to 5000.

Jedisia said:
Just scored this 2" Naboo fighter and figure set. I believe these were numbered to 5000.

I recently picked up all these guys for around $3 a pop. I love collecting POTJ and Episode I because they're so cheap and have great sculpts. The Jar Jar with Kaadu was new in box at $12.

Most recent buy, before this was the Naboo Obi-Wan that's not pictured.

I remember when I first learned of those Battle Droid two packs, and wishing I could trade all of my Comm-Tech chips for Battle Droid figures. lol
Such a better pack-in.

King_Goji said:
I remember when I first learned of those Battle Droid two packs, and wishing I could trade all of my Comm-Tech chips for Battle Droid figures. lol
Such a better pack-in.
Click to expand...

HAHA. Ain't that the truth. I definitely think the Freeze Frame slides are the coolest pack-in they've done. I have the Hoth Luke binocular viewer but I still have never broken out an actual slide projector to look at them on a big screen
You must log in or register to reply here.
Share:
Facebook Twitter Pinterest Email Link
Top