Just got myself the Evolutions Jedi Legacy pack. All the figures are good, but they all suffer from the same problem. The heads and hands skin colour is off and kinda makes them look ill. Bultar Swan I'd say is the best all round. Luke's likeness ain't all that great. Qui-Gon's hands are like the Bith musicians, but ain't all that noticeable if he wears the cloak. His head swapped perfectly with the mail-away figure that comes with the Eopie. That one has a much better likeness, and now I have it on a proper Jedi Qui-Gon. The off-colour head from this set also suits the mail-away figure as it sort of makes him look stressed, just as he should be after running a marathon in the desert and fighting Darth Maul.

^
Nice..
I like all the McQuarrie figures form the 30th line, and traditionally I'm a vintage guy..
So far, given all that's out there, the modern figures that I have invested in belong to the 30th McQuarrie + few others, and the POTF2 EU line including Katarn, Mara, Thrawn, Dark Luke, Jedi Leia, Sentinel and other EU figures from that small release.

I have a question about the concept Boba Fett. I noticed a difference in the flame color. I've seen one flame clear and another more red and not see-through. Is there an actual variant to this figure?
P

This morning I got in the mail, CZ-4 along with a couple of Legacy Collection figures to complete some of the droid building
I

I picked up CZ-4 too. Great figure.

There's word going around that a Philadelphia area Five Below store had some Celebration IV exclusive R2-D2/C3PO McQuarrie concept figure pair ($5.00). Great price considering I paid $15 plus shipping back in 2007. It's just odd someone had these stashed for almost 7 years!
R

If that's the case I wonder if someone would pick me up one? Can't beat that price at just 5 bucks.

I have a MOC EVO JumpTrooper on the way. This is my favorite line for some reason, I just loved the selection of figures.

p.s I'm looking for a Mint Darth Revan and Malak if anyone knows someone looking to move either.
O

Picked up a carded Hermi Odle at the not-so-local mom and pop toy shop today. I already have one on the card but got this one as an opener. Will go very nicely with the rest of the Jabba's Palace display. 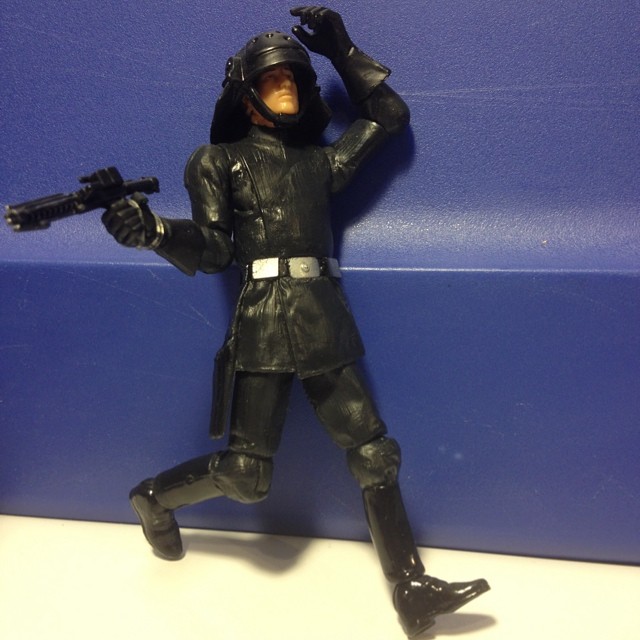 Star Wars-The 30th Anniversary Collection Death Star Trooper (30-13) [2007] by SacredKnightOfTomorrow, on Flickr
Just went to Crowmag toys in Raleigh yesterday, got a dozen loose figures...here's one of them.
I also got a packaged one 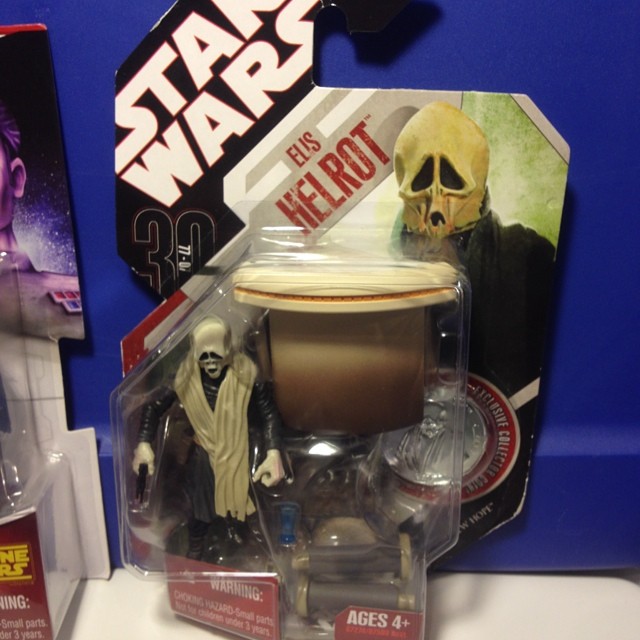 Now I just need to get the other Cantina pieces. 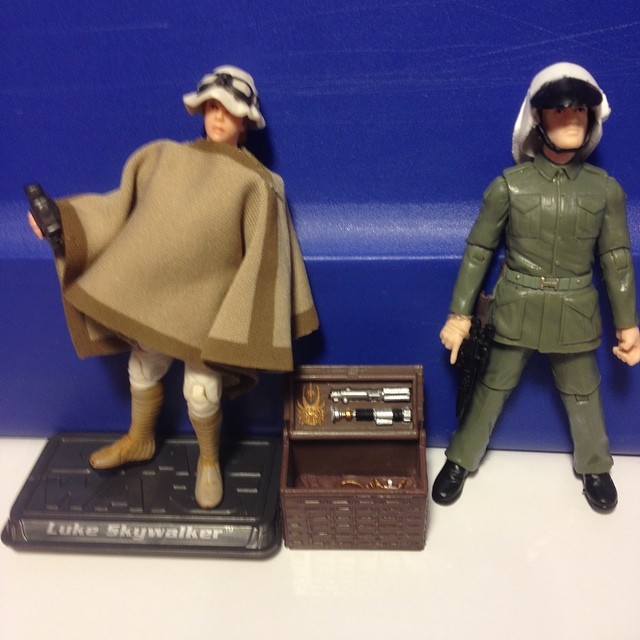 Got on ebay a 501st Jet Trooper from the Battlefront game.

I just got the Y-Wing Fighter this last week...it's HUGE and AWESOME! 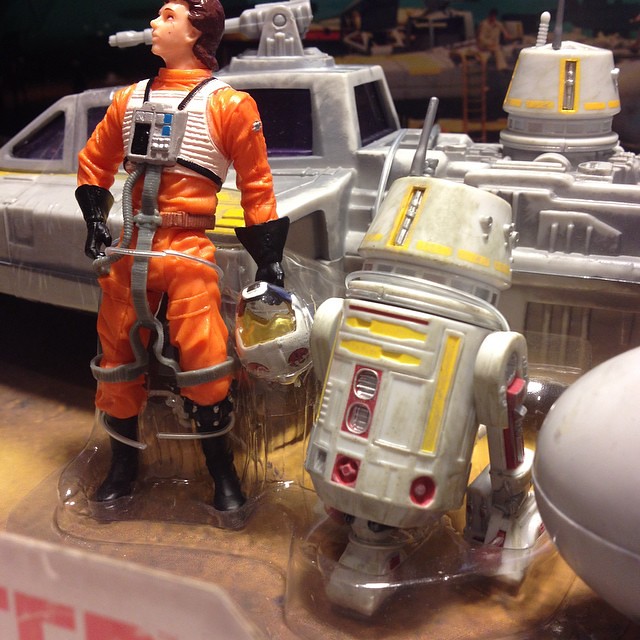 #starwars #ywing I remember getting a little diecast metal version of this when I was in second grade from my neighbor Crystal at Christmas and ever since then I've really love the ship. it's not my favorite: the tie interceptor is my favorite by SacredKnightOfTomorrow, on Flickr
R

Not a huge score, but I was able to pick up the coins for Revan, Malak, and Pre-Cyborg Grevious in a single auction on ebay. I guess when there's nothing to buy in stores, we'll always find some way to fill those holes in our collection.

A buddy of mine hooked me up with a mint on card Mustafar Lava Mining Droid and platform.
P

I just found a box in my storage unit that had all of the McQuarrie 2007 series figures I'd gotten back then...even a few gold variants. I'd forgotten all about these guys lol

After years of changing my mind on Hermi Odle I FINALLY bought him.
J

Finally got the TAC Comic Pack with Luke and Mara Jade. My only major disappointment is the lack of ball-jointed elbows, and to a lesser degree, the lack of leg articulation on Luke. Wouldn't mind seeing this outfit redone - even if it is EU, it's just the Pilot uniform opened up a bit and not really far from canon.

The TBS and TAC Mara's head posts are SO close but not quite right... makes me wish one day I could customize them together, but that's not my current specialty.
P

Wishing Well I also have my own Hermie that I still have in the card. Big fella and I think he's bigger than the Ephant Mon figure Im not sure.

picked up The Force Unleashed Felucian Rancor and Rider last night. I missed out on this when it first came out so I was able to pick it up for retail cost at a comic shop which was nice. Wish I had scored one of these when they went on clearance back in the day.

picked up 3 of the TAC AOTC Padme (fireplace version) for some custom work.

On a bit of a rebel binge recently, grabbed a few Honor Guards from a local shop. Had one when they were first released but eventually carved him up into different custom works.

picked up a loose Slave Leia for some custom work. going to try and transform her into a 3.75" Betty Page for the ReAction Rocketeer figure.

picked up a loose General McQuarrie figure for custom work.

Location
On assignment with Delta Squad

Just purchased a clone trooper officer (Commander). Well, this means I need to count my clone figures and see how many I have.... this could take awhile.

DarkArtist said:
picked up a loose Slave Leia for some custom work. going to try and transform her into a 3.75" Betty Page for the ReAction Rocketeer figure.
Click to expand...

There was a connection?

Every hot-blooded American male connected with Betty Paige back then!

DarthMickeyMoose said:
There was a connection?
Click to expand...

I went to Rhode Island Comic Con and picked up a Biggs Darklighter figure. I had someone by the name of Garrick Hagon sign it for me.

Here's the picture again as I removed it on photobucket to make a change then didn't realize there was no edit button here. Oops.