I would like to see the RS collection big time!
?

MasterBENbro said:
Do all of the figures in the Photo Archives go into your personal collection?
Click to expand...

All of the figures that I've shot are FROM my personal collection, so yes.

I do have nearly every action figure ever made, so it's a pretty big collection...although not everything is on display anymore.

Mr Curto said:
All of the figures that I've shot are FROM my personal collection, so yes.
Click to expand...

Well ... that's not completely true. In the past, you have shot pics of items from the collections of us local boys.

Of course, you always add the item(s) to your collection eventually.
?

oh yeah....that's true. I couldn't do it without the help from you guys.
I

Curto could you post a picture of all the clones you have. I would love to see a army as big as yours would be

Mr Curto said:
oh yeah....that's true. I couldn't do it without the help from you guys.
Click to expand...

Anyone notice that the paint is quite a bit different from what we had previously seen?

1) Does anyone else have difficult getting him to stand?
I mean, mine seems to literally have 2 left feet, so it's not the typical warping or one leg being shorter than the other deal.

2) Does he come with a missile? I feel like I may have dropped it while opening him, but maybe I imagined it. Mr Curto hasn't put one in the archive yet...

nomadscout said:
1) Does anyone else have difficult getting him to stand?
I mean, mine seems to literally have 2 left feet, so it's not the typical warping or one leg being shorter than the other deal.

2) Does he come with a missile? I feel like I may have dropped it while opening him, but maybe I imagined it. Mr Curto hasn't put one in the archive yet...
Click to expand...

It stands, you just have to manipulate the knees, but be careful. I broke one of the legs on mine about 20 seconds after I opened it.

And no, no missile.
N

Cool. Thanks for the tips. I finally got him to stand. But I still think he's got the wrong feet. It's kind of strange looking. Eh, I like him anyway.
?

nomadscout said:
Mr Curto hasn't put one in the archive yet...
Click to expand...

That's because I haven't found it yet, despite looking EVERYWHERE this week!

nomadscout said:
Cool. Thanks for the tips. I finally got him to stand. But I still think he's got the wrong feet. It's kind of strange looking. Eh, I like him anyway.
Click to expand...

Check the bottom of the feet. One should read different than the other.
I saw about five of these guys hanging on the shelves the other day but regretfully passed as I do not like the arms of this figure. If I see him again I will pick him up just for the rocket launcher. That big gun kicks [censored]!
N

Well, there's no markings on the feet. The stamps are located on the backside of the spats, which is a separate piece from the feet.

It's kinda hard to see what I'm saying, so I highlighted the angle of the feet in the second picture.

He has a wide leg stance. Each foot should be angled slightly inward in order to stand flat. However, since they seem to be the same foot (at least on mine) they are angled in the same direction. So while his left foot lies flat, his right foot is at an odd outward angle, so he is standing on his instep. I think he's actually standing on the outside edge of an improperly installed duplicate left foot.

GAR - I'm not sure if this is what you meant. If you swivel his right knee 1/4 turn to the right (and his foot with it) the foot does lie flat, but he looks pretty odd.

And normally I think the BFGs are dumb, but it looks awesome with this guy, and I'm glad it doesn't come with a goofy launching missile! Great last minute change, Hasbro!

I just love the fact that they varied the usual ethnicity with this generic character. Keep that up!

One thing I don't like, is that his holster is not deep enough to hold his pistol, so it sticks out strangely.

You sir, have two left feet.

You're right, it should be angled in, and it's not. Did you keep the receipt?

Why does hasbro do that, they make a crappy Rebel Trooper (except the Royal Honor Guards)...yet most of the empire are pretty good...
N

You're right, it should be angled in, and it's not. Did you keep the receipt?
Click to expand...

Nah, I'll keep him and name him Lefty! He's special.

Or, maybe I'll put him on Ebay:

Only 3 of these per state were released by Hasbro, for a total of 95. I saw one recently go for $13,000 on Ebay. Bid now for your chance at owning one of the holy grails of Star Wars collecting! Bid with confidence. Check my feedback and make note of the hundreds of super rare HTF gold coin and Rich MacQuigley figs I've already offered to the collecting community for a fraction of what you'd have to pay someone asking $50! Buyer pays more than actual shipping costs plus a 20% handling and materials fee, all paypal fees, driving fees, sales tax, income tax, and thumb tax. Use Buy-it-Now, and win a free collectible of my choice from the following: 10 Jedi Master Points, TAC Galactic Marine cardback (not mint), a downloadable low-res photo of the logs from the exclusive Endor Ultimate Battle Pack. Good luck!"

Well, super-deformed might draw the wrong crowd, namely people who expect him to have a huge head and a tiny little body.

Seriously, though, if you did put that guy up for auction as a variant with all that hyperbole, and someone actually bid on him, I would not be surprised.
C

You're right, it should be angled in, and it's not. Did you keep the receipt?
Click to expand...

This situation does not happen often, but it does happen. I've had the officer from mace's battallion having two left shins. I have also had a 501rst with two left feet as well. It's a bit annoying but it is correctable (return it or find the person with two right feet.

I also got one myself at my local Target.

Here are some pics I took. Enjoy!

The blaster doesn't seem to fit in the blaster-holder. Lets hope it works for yours.

Yoda- "Always two (left feet)there are. No more, no less."

Does anyone else think that rocket launcher looks suspiciously like a G.I. Joe "Sigma 6" accessory? I can't find anything in the yojoe.com photo archives, but the handgrip just seems way too big for 3 3/4" scale.

I got mine from HTS yesterday and I love him! I love the new rocket launcher. Its not a G.I. Joe toy. Its from this years BF droid pack.
C

I think this is one of the worst figures ever released. The helmet is WAY too big, it comes off every time I reposition the figure. The blaster doesn't fit in the holster, and don't get me started on that bulky rocket launcher thingy ...
? 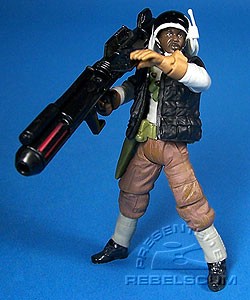 There have been a few changes made to this figure from the beginning, but I'm glad the cannon was added...and the change in the vest allows the arms to actually move more than they did in earlier figures.

If you don't like the weapons he comes with, just exchange them with another figure. After all, one of the fun aspects of the game is changing weapons!
N

I do like this one a lot, more than I did the Endor version and the BFG is flippin' sweet. I wish I could find another, mainly for the gun, and to repaint slightly so I can put another head on him. Although not to put the 'brotha' down... but not all black guys look a like LOL

You get your money's worth, when you buy him, IMO.

The large cannon is awesome! I like this figure alot!!!
?

This figure is coming tomorrow to our Photo Archive, but you can get a sneak peek today!

One of my favorite figures in this wave!

Wow! It must have been pretty hard for you to jam that blaster into the holster, Curto. I can't even get the blaster to fit halfway in with mine.

Yes, it is back on my Wish List, so people, let me know if you have an extra to sell...

A nice kit bash. Turned out alot better then I expected. Just goes to show how easy it is to do random EU characters.
S

A good idea for a BFII figure, but I don't like the sculpt so I'll be passing.

Does anyone know how to get the pistol into the holster? The Archives pulled it off, so its possible, but mine won't fit past the tip of the gun. Can it be done without cutting the pistol in half?
K

DutchVander said:
Does anyone know how to get the pistol into the holster? The Archives pulled it off, so its possible, but mine won't fit past the tip of the gun. Can it be done without cutting the pistol in half?
Click to expand...

I think that's just a flaw in how some of them are produced. I had 2 of the Endor troopers this figure's based on, and on one of them the gun fit fine but the backpack wouldn't stay on, and the other one had the opposite problem.

I picked up a second coin version of the RVT with intent to open one, display it loose and also have another coin for my album.
After comparing them side by side, I noticed a little paint error on the projectile launcher...

Has anyone else noticed this at all?

in stores yes i have whats with that?