Well, this is a nice suprise since it's supposedly the trooper from the Battlefront games! Can't wait to see pics of this!

Yet another cheap Vanguard slowing down a SA resculpt's production. I passed on the Endor Commandoes this is kitbashed from for the same reason.
T


Inigo_Montoya said:
Yet another cheap Vanguard slowing down a SA resculpt's production. I passed on the Endor Commandoes this is kitbashed from for the same reason.
Click to expand...

Meh not really, it just means we might be getting our BFII Rebels through basic waves.

Just have to see pictures of it when it surfaces.

I'm kind of scared to see how this one turns out. I hope it's at least worthy to stand with the other Endor Troopers.


Darth_Anton said:
I hope it's at least worthy to stand with the other Endor Troopers.
Click to expand...

Or the other Rebel Fleet Troopers.
C

I didn't have a problem with the TSC rebel trooper, so I'll definitely pick this one up.

Here's a custom of the Rebel Vanguard Trooper that's listed on Ebay. I believe the customizer is a forum member. The eventual Hasbro product will most likely look very similar. 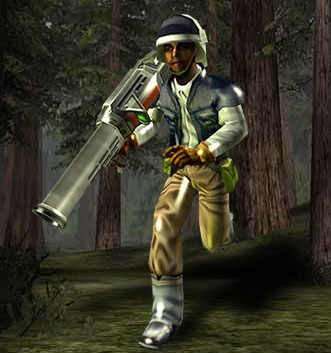 Hmmm...I'll wait and see on this one. Usually I'm psyched about any EU figures, but this one just isn't doing it for me yet.
T

<sigh> so close, yet so far... just like the TSC Rebels! The jacket looks great, but is horrible since it limits the arms. The arms themselves aren't constructed very well and are better suited to two-handed rifle poses than single-handed blaster poses. The legs, while not as extremely off-kilter as the Saga versions, are still too skewed to be effective for neutral poses.

Funny thing is, I tried an Antilles helm on one of mine yesterday before seeing the report. The fit was nice, I dug the look, but I never thought about the BF2 Vanguard while looking at it. Guess I need to play more

Would've been better with the vest sleeves sculpted onto new arms and with the upper legs, at least, modified so the trooper can stand up at straight.

Hmm, could be cool. I'll definately pick him up regardless.

Inigo_Montoya said:
Yet another cheap Vanguard slowing down a SA resculpt's production. I passed on the Endor Commandoes this is kitbashed from for the same reason.
Click to expand...

Meh not really, it just means we might be getting our BFII Rebels through basic waves.
Click to expand...

That would be great, I'd love some more Rebels, as long as they're kitbashes of SA figures.
N

I just hope we get the tan, "mechanic," version.
T

I think it's weird that they went with this one, but I'm glad to hear that more are in the works. I really want to see the BF2 jetpack trooper and an SA version of the BF2 darktrooper.
B

Not sure how I feel about this figure. I kinda like it, but then again, I'm not a big fan of that static torso and arms from the previous Rebel troopers. Nice to see a custom as aquick reference though. The decision to buy also kinda hinges on the paint apps. We'll see.

Those customs are by Fritzkrieg - simple but pretty cool.

those are great customs so i am sure that the hasbro ones will disappoint. would like the rocket launcher though.
B

Yeah, I always check out the customs threads for new stuff. Those look pretty good. As do your's.

TYhe figure needs to come with a few weapons - rifle, blaster and rocket launcher and anything else Hasbro wants to toss in

It has to AT LEAST come with the rocket launcher, that was this character's primary weapon.
T

I'll have to wait and see how this one turns out before I make up my mind. Besides, for all I know, I could end up buying this, then learning that it's gonna be part of a Battfront II Rebel pack (stuff like that has happened to me too many times...[censored] battle packs

That's it? They're just Endor Soldiers with Fleet trooper helmets? I guess Fritzkrieg's customs are what we're getting then.


Darth_Anton said:
That's it? They're just Endor Soldiers with Fleet trooper helmets? I guess Fritzkrieg's customs are what we're getting then.

Yeah, sounds like it. And his work has a way more personal quality to it all with the minor variations on each trooper to spice it up. We'll have to rip his customs off to make the Hasbro versions a bit more interesting.

. Of course I want him to come with a rocket launcher too, but something tells me he won't be able to hold it in either a decent action or neutral pose.
T


Darth_Anton said:
That's it? They're just Endor Soldiers with Fleet trooper helmets? I guess Fritzkrieg's customs are what we're getting then.

Unless they give us the BF2 "Yavin tech" version of the Vanguard, but really that'd have to be a new sculpt. MAYBE they're saving that version for a Rebel BF2 set, but judging from the tiny CW-era sets we've seen so far, the only new stuff are some weapons and the Clone Engineer's helmet... so an all-new Vanguard is pretty much out for this wave unless they repainted the RHG with a tan uniform and said it was 'good enough' like last year's Kashyyyk Elite.

Wait, this is a Battlefront 1 rebel vanguard trooper,

Yes it is....the custom above shows pretty much what it'll be. Pretty good match really...


Bob_IV said:
Wait, this is a Battlefront 1 rebel vanguard trooper,

Your powers of deduction are astounding.

Anyway, since most of the rebels from the BF series require new sculpts, this one might be the only one we see for a while.
J

I for one am really excited for this figure. I love both 1 and 2 of the game and welcome any version of these awesome army builders. Here is pic of all the Rebel Vanguard Troopers through out the span of both games. (I got this pic that BlackRook posted in the Battlefront multipack thread found here: http://threads.rebelscum.com/showflat.php?Cat=&Number=2506789&page=&view=&sb=5&o=&fpart=4&vc=1 ):

As you can see, only the first one (which looks like the custom figures up above) are from the first game and need little tooling to accomplish the look. All the others would need new tooling to get those versions. Plus, there is a 3rd installment in development for the next-gen consols. Who knows what that might bring us as possible figures.

I hope this helps some,

All right!!! Bring on the variants!! 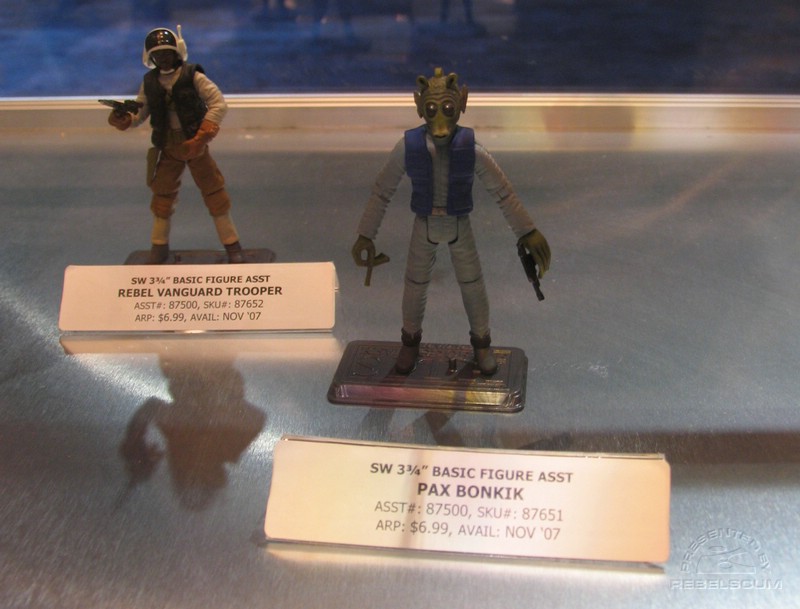 Nope. Don't like it. I'll wait for a better Vanguard. So far, I don't like the articulation and the lack of his main weapon.
L

Wow...its not a battlefront figure without that rocket launcher! If they can afford them for the battlepacks later, why not for this figure?

I'll change my mind if they forgot it.

Wow not that impressive it's just a normal trooper

Not everything that comes with each figrue is there.
Some weapons are either in production or they just forgot to bring it and/or put it in display.