So i found this vintage store display was wondering if anybody had any more info on it, lights up and blinks to simulate hyperspace.
Last edited: Dec 21, 2017
E

Ewoked said:
So i found this vintage store display was wondering if anybody had any more info on it, lights up and blinks to simulate hyperspace.
Click to expand...

That is from a 1996-1997 Toys R Us store display. They had a huge display at the front of the stores around the time of Special Edition movie releases. There was also the infamous 6ft by 4ft falcon hanging from the ceiling.

I have some of the side panels from this display but was never able to get that center piece.

What did Han Solo and Chewbacca sit in? That piece has those 2 tabs on the bottom that make me believe that they went into something I am missing 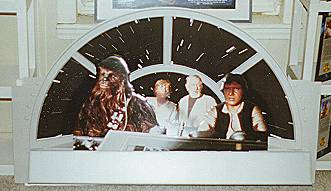 The release of the Trilogy Special Editions in early 1997 saw a huge marketing push on the part of Toys 'R'Us, as they launched a campaign to promote Kenner's Power of the Force product. Most TRU locations situated their Star Wars "feature areas" towards the front of their stores, and embellished them with large installation displays, including the huge, now-famous Millennium Falcon display, which was usually seen hanging overhead. Above is pictured the center piece of these Star Wars areas, a cockpit-like assembly equipped with an LED sound box and flashing lights. The design of this display was so striking that I don't believe most even noticed that the characters seem to be facing in the wrong direction!- theswca
Last edited: Dec 30, 2017
E