polling -what are you collecting?

Well, I don't mind adding some other OT droids and Jawas, as they go nicely with astromechs (did I say it again?)

These days it's Mandos, wookiees, and EU figures (only SA,no 5 POA for me).

Everything. Every figure that comes out I eventually get.
F

i am only collecting 6" black series
C

I quit Star Wars all together except for a request I just submitted to a friend to locate something for me. Other than that, I am working on completing my 82-94 loose complete GI Joe Figure set. All figures, all accessories, all file cards, no vehicles. I just don't have space for vehicles. So hasbro has stopped my star wars habbit for me. Thank you! However they did get me with the GI Joe Ultimates wave. Ugh.
V

Trying to complete a few lines and get some newer items of interest.Like I need more carded figures.
H

As far as Vintage, the goal is all the ESB hoth toys, graded or MOC/MISB. While I like all of SW Vintage, ESB is my favorite,,, there are a few items from ROTJ I''d like but its not really a top priority for me.

The other line is the TVC line, ROTJ, SW and ESB. Working on that. Black Series, didnt really care for much thus far except for Boba and the Sandtrooper in the 6 inch and the Scout trooper.

Finishing up my vintage loose collection, few more higher dollar items to go. Fishing out repro weapons and replacing them with authentic from said vintage collection. Picking up a few Beater cards here and there (when I win the auctions). I'm just enjoying collecting Vintage SW right now. Although, I did just buy a Black Series #05 Luke, who was rotting on a shelf at the local Walmart... So, I guess I'm just kinda picking up whatever seems to come along.....

I have several things from back in the day but those aren't in my collection. My collection does have a few humor pieces in it. I really don't really have a focus as of yet but I suppose Darth Vader / Sith Lords would be my generalized one. As of right now, I have a modest collection Kotobukiya, Hallmark ornament (vehicles only), Hawthorne Village sets (they just released a new series), Gentle Giant, Force FX lightsabers, some select books & a couple of vintage pieces. I also was fortunate to work at Taco Bell back in the day when they had The Power of the Force game going on. I still have my t-shirt, game card pieces, kid's meal toys & even an R2-D2 drink cup display. I'll probably get all of those in their own display case / frames.
T

I stopped collecting few years ago and sold everything off. I just started collecting again last month because I was drawn back in due to the TVC line of figures and vehicles. I did not miss it one bit till I saw the vintage repackaging of the modern stuff. Dang you Hasbro!
S

somehow the TVC ones got better moulds and articulation than POTFs and POTJs. but tht's just me

Collecting for me is a we thing. My son and I love star wars. As a kid I collected star wars and had a ton of vintage that my mum sold for $50 to our friends when I was 14!!!!! We collect 3 3/4 anything, Vintage to the black series.open for my son and closed minty fresh for me. Gg jumbos, waiting for that wampa!!! And droid three pack!!!plus 4 other figures Lego is a big one for us. We must have 350 star wars lego mini figs plus . Gotta love lego. Just getting into bs 6". Plan to get a few more of them for sure. Low quality packaging has been a huge issue for me lately. Not quite sure whats going on. Hope it gets better.
W

Right now I am really focused on the Clone Wars era. I am mostly going after 3.75 inch figures but I recently (as in yesterday) took a plunge into the Lego world and don't regret it at all. My goal is to get all of the characters I like from the animated series in figures, and army build with Lego minifigures to recreate battles.

Outside of Clone Wars I fully intend on purchasing every figure in the 6" Black Series.

After I am satisfied with the Clone Wars I will get into the OT, probably with Hoth stuff.

Still focus collecting for Millennium Falcon items. It's been four years now and I genuinely think it's the best decision I have made. I feel like I'm collecting now rather than just acquiring.
Last edited: Jan 13, 2014

Collecting mainly the first 21. Finished my 12 Back MOC collection and am slowly trying to wrap up the rest of the 21 MOC. Also, I'm collecting these figures loose, which is a heck of a lot easier and less costly. It's been a blast so far, and I really enjoy interacting with folks here on RS.
E

jfiksman said:
Collecting mainly the first 21. Finished my 12 Back MOC collection and am slowly trying to wrap up the rest of the 21 MOC. Also, I'm collecting these figures loose, which is a heck of a lot easier and less costly. It's been a blast so far, and I really enjoy interacting with folks here on RS.
Click to expand...

Are you doing the variant figures as well?
R

I'm kinda of going after green cards currently with some TAC and Saga legends stuff.Plus, McQuarrie figures and Galactic hunt versions as well.I'm a little across the board,but mostly newer lines.

emercer007 said:
Are you doing the variant figures as well?
Click to expand...

No, not yet. Right now I'm trying to keep from opening Panadora's Box. Everyday I tell myself I'll be happy with just the complete set. I know however, that this collecting bug I've got will never truly end.
H

STill chopping away at all the ESB Hoth Kenner US vintage toys, AFA graded, or MISB. So far pretty good, just lacking 4 biggies then I can start to hack away at the the Hoth MOC AFA graded figures.
J

Becoming a big fan of the 12 inch figures; they display nicely. Also a fan of the Hamilton plates; they too display nice and I've been able to get them for good prices.

Used to collect ALL things Star Wars, didn't matter if it was a toothbrush, paper product, piece of jewelry or a mint boxed/carded item, whatever. Sold duplicates and many pieces to keep vintage and one loose piece (some modern kept carded) in favor of now collecting solely autographs and 1/6th figures and making customs. Was relieved to get rid of so much and more to go!

Location
Tatooine and summers on Dagobah

Sergiu said:
I used to collect Action Fleet and Micromachines and when Hasbro canceled those lines there was a void I filled up with Kotobukiya statues. At that point I also shifted focus towards Original Trilogy Imperials only. Now I collect the following: Master Replicas/eFX, Gentle Giant statues, Kotobukiya statues, Medicom figures, Sideshow figures and PF statues etc., but only OT Imperials
Click to expand...

So I guess my focus remained the same as in 2008-2009, but besides the items described back then, I'm also collecting fan made/unlicensed highly accurate prop replicas, helmets and even statues. Best decision in collecting.

Ever since I began to focus on R2Builders Club, I slowly began moving away from the collectibles and toys. What has survived my exodus from collecting are the astromechs, and other droids (protocol, etc.) to a lesser extent. Also, my eFX stuff which consists of:
- McQuarrie Vader
- Celebration V Luke Rebel Pilot Helmet w/signature
- Legend Vader
- Wedge (I wish this had been a much smaller run and included a signature)

I plan to acquire the Stormtrooper Legend and Boba Fett Legend helmets. I'm running out of funds!

My passion for now is mostly droid related:

In a recent pic, look at the jungle in my basement. this was taken while trying to prep for a convention with time waning.... 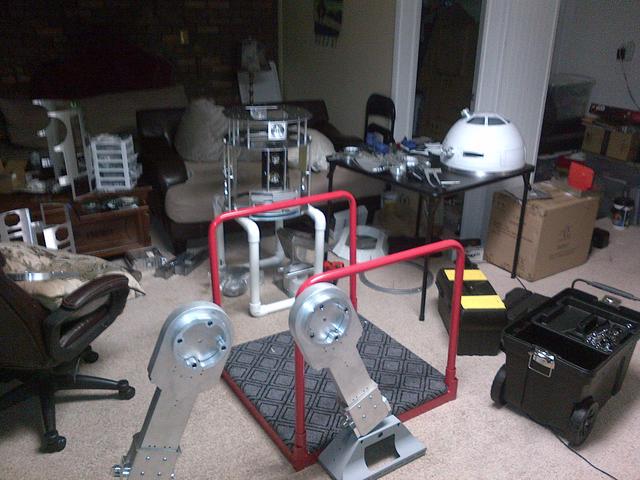 Here you can see that I have R2-D2 to the left, a second droid straight ahead, empty shelves (my gallery has many pics where you can see stuff on those shelves, nice things) 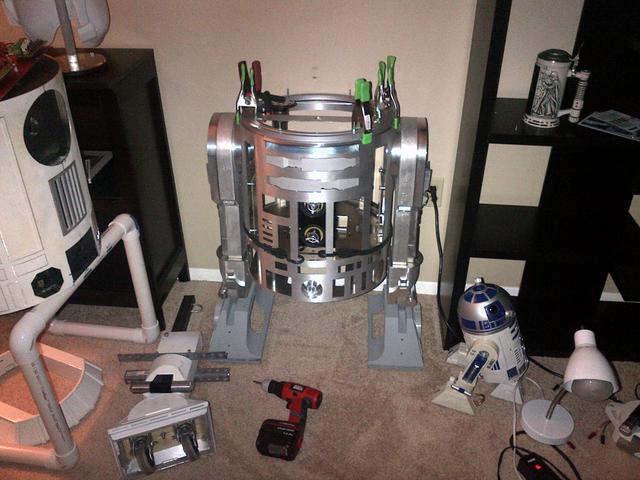 I only collect vintage figures and started on TVC when they came out.....well that's what I try to tell myself but honestly I buy any Star Wars item that catches my eye, I have a problem I know lol

My main focus was 3 3/4" Vintage & Hasbro figures plus action figures scale ships. This was until I began to run out of space. its the same situation with my Titaniums and Micro machines - available space. After much organising of my computer desk I have now have found some more room so I ordered my first Black Series 6" today :grin:

Mostly OT Screen used or production made items. Honestly anything with the words Star Wars on it i like but when it comes to making sacrifices then OT Props/Material first. The vintage figures will always have a place in my heart just not on my shelf the same way as the disease re engulfed me with the prop thing. I was into OT posters but they were spending more time in tubes than on walls and any that i had that were considered rare can be found online at any given day i have ever checked. I like what no one has or few surface of and it does not need to always be the most iconic piece as long as it was there when the action went down that is good enough for me.
Last edited: Oct 22, 2014