Eh, it's a little bland if you ask me. I would've added a little more color to it, and also changed the shape of the card so it looks a little more dynamic (like the Predator cards) and not just a boring rectangle.

I don't care so much about the cardback, just get these figures out quickly! Lame cardback design, should've used a montage of various scenes for an epic card design but oh well it's the figures that count right?
M

The hips look a little odd, but it'll probably look better out of the package.

Yeah, the cardback choice wouldn't have been my first, either.

My birthday is in November too. Can't wait. I'm hoping Series 1 really does hit this month. I think NECAs release dates just sorta apply to when they get product from overseas. It takes 2-4 more weeks for it to sift through the country and local DCs to get to my TRUs...

Ack, no way!! And I'm broke right now...still need to get the new Predators, too.

I'm now hearing reports of people receiving their BBTS orders, and a few scattered reports of TRU sightings via Twitter.

More and more I'm sorta bummed about the coloring on the pressure suit Engineer though. I mean, I'm sure it's correct because NECA does tireless research into the film props, but the lighting in the film makes it look so different. The figure's suit is way pale and his skin doesn't even seem to be blue...

Though I reserve final judgement until I have them in hand, and it's nothing a repaint can't fix anyways. These are still my Most Looked Forward To Figures of the Year!
M

Now that I've seen more out of package pics (haven't picked them up yet), there's still something about the Chair Suit Engineer's wide hips that bugs me.

Is the space jockey in pilot suit as dark at the prototype images showed? I hope not.

I guess that one's a little too dark but it's not as glaringly weird and pale looking as the pressure suit (unsuited) version.

Checked TRU for these - no sign. Anyone know the pricepoint and case ratio?

Totally forgot about these figures. I thought the masked Jockey was cool, probably won't get it until I can hear some positive reviews online.

I did originally want these but now I'm not sure if I need them. I still want David. But these guys?

Hell, I've wanted a Space Jockey for 20 years, and it would be longer if I had been born earlier! The Chair Suit is a must have, but I'll definitely get the Pressure Suit too.

Blight said:
I did originally want these but now I'm not sure if I need them. I still want David. But these guys?
Click to expand...

We all NEED action figures.

My gut tells me Neca will eventually do the jockey in his console/chair thing. Thinking I may hold off a bit on picking up the pilot jockey and see what Toy Fair reveals, if anything.

I'd dig the chair very much, but NECA doesn't really tend to do big 'ole sets like that. I wouldn't mind being proved wrong though.

I found the two Engineers at TRU today. Both are almost unspeakable cool. I'm still not digging the paleness of the one but I haven't been able to stop goofing with either of them since I opened them up.

I was really looking forward to these figs and they didn't disappoint. Now I get to be all anxious and waity for the Trilobyte two pack! The Deacon will be awesome too, but I don't think they have a set date for it yet.
S

Pardon me for back stepping a bit, but how nice is the Warrior Alien from Aliens that NECA did, and big chap for that matter?

I see BBTS has the Engineers in stock. Bought the movie combo pack...was expecting more behind the scenes extras, trailers, etc.

SGT A, I don't have the warrior but I believe it uses a lot of the same parts as the Alien from the first film and I DO have that. It's very cool, full articulation and detailing and everything.

I don't think NECA has done the Big Chap. I think that was McFarlane.
M

Actually, NECA did make an ALIEN Alien (Big Chap) a few years ago, it was pretty cool. Better than the McFarlane one, which I think was their best of their whole Alien and Predator lines. NECA also released him in a 2 pack with an unmasked Jungle Hunter Predator and 2 trophy skulls about 2 years back, it was a TRU Exclusive.

I also picked up the basic Prometheus DVD the other day (yeah, I still don't have a Blu Ray player, I'm in the stone age). $16 at Target. The only extras are some deleted and extended scenes, but unfortunately, the one I really wanted to see (the alternate intro with the other Engineers) is not on it. WTH? They actually show a quick shot of it in the tv spots that are running right now, but it's not on the DVD. Guess it's only on the mega 4 disc BR set.

Also, for anyone who's found the Prometheus figures at TRU, how much are they?

I haven't watch Prometheus yet. Still waiting for my DVD from Amazon.

Picked up both Prometheus figures today at TRU, $15.99 each

SGT_A said:
Pardon me for back stepping a bit, but how nice is the Warrior Alien from Aliens that NECA did, and big chap for that matter?
Click to expand...

While I can't speak for the Big Chap, I do have the Warrior Alien, and like AgentClaret said, it's basically the original Alien sculpt with a new head, hands and feet. The only real complaint I have about it, and also one thing you should be aware of if you do end up getting one, is that the "fins" that run from the Alien's elbows to its wrists severely restrict the figure's elbow articulation. You can't even get his arms to bend a full 90 degrees. Unfortunately for me, I didn't notice the "fins" when I first opened my figure, and I bent his left arm too much, so now his left "fin" has a slight rip where it attaches to the elbow. Just a heads up, SGT_A.
S

Thanks Scorch, that helps. I'm looking at an eBay purchase of 2 for $25 shipped, I want enough to give my Colonial Marines something to fight when NECA pushes them out. Game over, man, game over!

jedisquared said:
I see BBTS has the Engineers in stock. Bought the movie combo pack...was expecting more behind the scenes extras, trailers, etc.
Click to expand...

I assume you bought the bare bones dvd version or something, yes? Cuz the 4 disc blu-ray version I got is jam-packed with hours of behind-the-scenes content. Hours and hours....and hours.

Emp. Palpy...I got the 3 disc(minus the 3D disc which I have no way to play). I only saw deleted/alternate scenes, the viral video shorts, audio commentaries...what was on the 4 disc...and which disc were they on? Amazon didn't give a very accurate listing on content.

UPDATE! Thanks for clarification on Prometheus sets Palpitate...yes, I returned my 3 disc(Had sound dropout spot anyway) for the true 4-disc collector's edition...very happy indeed with the hours of extras!!! Only a 5.30 difference in price, too.

SGT_A, you may also want to hold off on the Warrior. They're supposed to be doing a new one around the time of the Marines figures.

Failing that, I still really need one too and if you should win that auction and decide you only need one I'd take the other off your hands!

And oh my god, I ALWAYS though the Big Chap was the Hybrid thing from Resurrection! What the HECK is wrong with me?

I'm still loving these Prometheus figs so much... easily my favorite purchase of the year!
S

Yeah, I went ahead and bought the two warriors for $25 shipped (I thought it was a good deal at least). I do want to keep both of them though, but I did have a question for you - The seller says that these are yellow variants, what does that mean, are they battle damaged to show the acidic blood? If so, then I REALLY want them (NECA) to make Drake now. 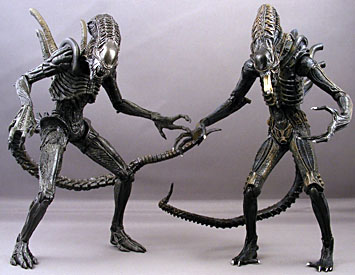 Congrats! All the other auctions I see are over $25 for just one. Bummer! Guess I'm waiting til the new one comes out!
S

Never mind, this guy waited until I payed, and then sends me an email saying, I don't have those, I'll have to refund your money when I can. That's why I hate evilbay
You must log in or register to reply here.
Share:
Facebook Twitter Pinterest Email Link
Top