​
While they didn't have any prototypes on display for the line... they did announce at SDCC that they have secured the license for Planet of the Apes. Both the Classic Films and the modern Rise and Dawn. Which is awesome sauce. They said they plan to treat it like their Alien and Predator lines. Which means plenty of awesome sauce figures.

There will be two different lines running at the same time. One Classic. One Modern.

They said that they don't have Charlton Heston's likeness rights at the moment... but are working on it.
Frankly, I can give or take getting Taylor or other humans in the line. I want some damn dirty apes. From both film series.

Hopefully 70's Era Clothing Cornelius and Zira will be near the top of the list.

Excellent news. I've been a big POTA fan since first seeing the films as kid on network TV broadcasts back in the '80's.

However, IMHO the best film so far in the franchise was 2011's Rise of the Planet of the Apes. This is actually one of my all-time favorite films, ever. Looking forward to Dawn next year as well.

Not extremely interested in Classic POTA figures, though it's nice they're being made.

Am very interested in figures from Rise & the forthcoming Dawn of the POTA, however. I'm guessing that Dawn would probably generate more figures, since the Apes may be in uniforms by that point.

Conversely, though Rise was a great film, I can only really think of a handful of figures that would be that interesting, i.e. Caeasar, the big gorilla, the scarred gorilla, and Ceasar on the horse.
O

The originals were on every weekend in the US somewhere it seemed. What a neat idea and I'll certainly get a few namely dr zaius!

Yeah, I wet my pants when I saw NECA post this as their Twitter pic the other day. POTA is closely tied with Indiana Jones as my second favorite film franchise (the first being SW). I have tons of Ape stuff, but have been waiting for really good, super posable POTA figures for years (not counting the original MEGO ones, which were great for their time, but are stylistic). I have pretty much all of the Medicom ones from the early '00s, and while they have great sculpts and paint apps, they barely move. Thankfully NECA said they have no interest in doing figures from that God awful Tim Burton reimaging from 2000. Pure crapfest, tis that.

Is it too much to hope for both 7 in. AND 3 3/4" Ape figures? I'm always saying my dream line is a 3 3/4" POTA line based on classic movies and tv show, with figures, horses, playsets, vehicles, etc. There's so much that can be done with them.
J

ThallJoben said:
Conversely, though Rise was a great film, I can only really think of a handful of figures that would be that interesting, i.e. Caeasar, the big gorilla, the scarred gorilla, and Ceasar on the horse.
Click to expand... Awesome!!! I used to have the Megos as a child and loved them. I'm very excited for these to be done by Neca with there new added articulation ways. Can't wait to get my dirty hands on these.
S

Oh man, if they make a horse(like the ones we saw on the Lone Ranger line) and a soldier ape I will prob explode.

Boy was I jazzed after reading this. I was lucky enough to get Mr. Heston's autograph on a Taylor still thru his sons production company; also Roddy McDowall & Vincent Price at a play in Delaware before they all passed. Also Ricardo M. on a Conquest lobby card...so yeah, big orig. franchise fan. I have the SSC & Hot Toys Apes line, the Medicom's & the figures from the Tim Burton reimagining. Can't wait to see 1st shots. I'm loving NECA more & more by the minute!
Last edited: Jul 25, 2013
O

I was born in '73 so either POTA or LR or Tarzan was on TV after cartoons on Saturday.

NECA Tarzan (Weissmuller AND Lambert!) figures would be awesome!!!

The classic line will have my interest. Depending on how they look and what they make I'm definitely interested in Taylor, and a pair of gorilla soldiers/guards for sure. Possibly Zaius and the others. Depends on how they looks and price.

geez NECA, leave some licenses for everyone else

(eager to see how they'll look!)

Oh man I don't need to be roped into another toyline.... curse you NECA for making POTA figures soon...eerrr!

I'd be in for Charlton Heston, Dr. Zaius, Cornelius, General Ursus, General Thade, Attar and Limbo. Beyond that I doubt I'd pick any more up.
T

To add/revise my last post, yes, Maurice the Orangutan from Rise of the POTA would make a good figure - I had forgotten about that character. Also, the violent chimp that Ceaesar fought in the zoo.

And, the more that I think about it, I wouldn't mind seeing figures from Beneath the Planet of the Apes (1970), especially those creepy mutants. This is my favorite of the original Apes films.

Hopefully these NECA POTA figures will be available @ retail. Though, the only retail store I've been able to find NECA figures in is TRU - which is better than nothing.

EDIT: Yes, I agree these need to be in the larger scale, i.e. the same scale NECA is using for Aliens, Robocop, Predator, etc. A 3 3/4 scale would be less expensive, but wouldn't do justice to the level of detail that needs to be seen on these characters (i.e. the Apes' hair, etc.)
Last edited: Jul 27, 2013

NECA isn't really known for that scale. So I doubt we'll see it.
M

They made some 3 3/4" Gears of War figures earlier this year and have a few Lone Ranger ones coming out this fall (along with some horses).
Last edited: Jul 26, 2013
J

monstermonkey said:
They made some 3 3/4" Gears of War figures earlier this year and have a few Lone Ranger ones coming out this fall (along with some horses).
Click to expand...

Aye. But they're not really known for the scale. And as bad as Lone Ranger bombed... I wouldn't be surprised if they scrapped them.

Besides... they already pretty much said they would treat the line the same way as Alien and Predator.

From what I've seen of their GOW figures, they could use a dose of better paint apps and Q/C. So I hope the Lone ranger figures turn out better looking.
S

You know I've kinda let this line sink in and I'm starting to get really excited about it. There are a ton of great characters to do and the colors and the leather and the fabrics that I know Neca will rock out on. Especially since they are treating this line like the Alien/Predator lines it will be well detailed and have awesome articulation. Now I just have to pace around waiting for some images.

I know...and I'm already daydreaming about the 2-pack possibilities!

gonna be a while to see these figures I think - as I am understanding NECA got this line really nailed down and sealed the deal just before SDCC. Who knows how far along they would have anything sculpted? I would think that when they are trying to get a line they are really going after they would try and get some prototypes made to help them secure the line, but maybe they don't? Kind of like Ripley for Aliens - I wonder if NECA has her already sculpted up and ready to rock so that they could show her to Weaver to help get her to sign of on the figure (I think I might ask them about this)...

Nevertheless, I decided to watch the original POTA last night and I enjoyed it B)

JarJarBinks said:
NECA isn't really known for that scale. So I doubt we'll see it.
Click to expand...

They're also notorious for only releasing a select number of figures for many of their licenses, which is why I typically don't bother to pick up their figures. When I first heard they had the licenses for The Dark Crystal, Labyrinth and The Princess Bride, I was eagerly looking forward to having at least most of the primary characters produced. Alas, that was not to be :|. Their Harry Potter figure selection also left a lot to be desired. So despite the fact they tend to produce beautifully detailed figures, I tend to pass them by, sadly.

heh, I just said the same thing in the Aliens thread.

Great news. Im definitely getting both original and Rise figures. I hope Neca makes figures from Conquest one.

Darth_Jawa said:
They're also notorious for only releasing a select number of figures for many of their licenses, which is why I typically don't bother to pick up their figures. When I first heard they had the licenses for The Dark Crystal, Labyrinth and The Princess Bride, I was eagerly looking forward to having at least most of the primary characters produced. Alas, that was not to be :|. Their Harry Potter figure selection also left a lot to be desired. So despite the fact they tend to produce beautifully detailed figures, I tend to pass them by, sadly.
Click to expand...

Yeah. But in this case... they've outright said they plan to mine the property ala Alien & Predator.

I'm excited about this line, but the only character that I would miss if they didn't make it would be Sheriff Lobo as a gorilla. :grin: I can't seem think of the character's name right now.
M

That would be Aldo (from Battle for the Planet of the Apes), played by Claude Akins. Man, Sheriff Lobo was always such a d#$% to BJ and the Bear back in the day.

I'm going to be all over the NECA Apes line, especially the classic stuff, but I'm seriously running out of room to display everything. I see an unfortunate weeding of my collection in the next year or so.

Battle is my least favorite of the 5 originals. My dream wish is the Icarus to scale with the 7".
M

jedisquared said:
Battle is my least favorite of the 5 originals. My dream wish is the Icarus to scale with the 7".
Click to expand...

Same here. You could tell they were really milking it and the quality kind of faded by Battle. I do have an odd love for the TV series, though. I caught the reruns of it in the late '70s and used to think the 2 humans were the same guys who played Starsky and Hutch.
J

Battle is better if you watch the extended cut. But agreed... it's nowhere near as good.
J

Well.. we have at least a Gorilla Soldier on tap for Wave 1 if the teaser Neca dropped today is accurate. That's totally awesome! Have they ever said when these are planned to hit retail?

Actually that sidearm(and the sub-machine gun at 1 point in the finale of Beneath) belonged to General Ursus. They were included with the Hot Toys 12". The billy club def. screams gorilla soldier.
J

steveaustin said:
That's totally awesome! Have they ever said when these are planned to hit retail?
Click to expand...

My thought would be we'll see something in Feb. from NY Toy Fair coverage.

Dawn of the Planet of the Apes trailer unveiled this week...only making me more excited to see what NECA has up their sleeve for this license.
J

Neca finally revealed the first figure from the classic line on their Twitter. The Gorilla Soldier! 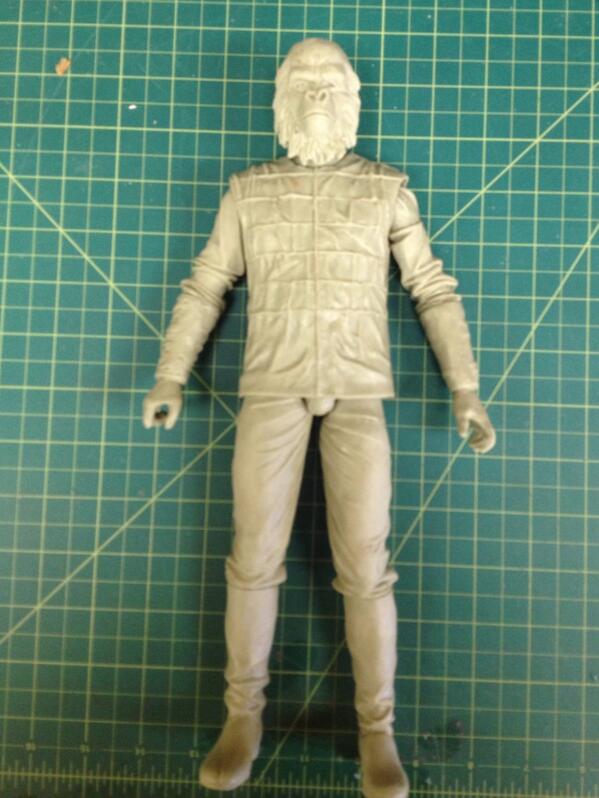