There are 2 versions of Deadite Ash. One has all white eyeballs for the severed head and the other one filled in eyeballs.
J

Picked up Farewell to Arms Ash and both variants of Deadite Ash. Normally, I'm not into varaints but with a small run of Evil Dead figures, I had to make an exception.

saw these at my Toys R Us, I might pick up an Ash if I feel like it

I saw these at TRU as well. Love the movie and the figures are great...I just dont feel like I need toys from this movie
M

Saw them too, didn't pick them up due to low collecting funds, but I will eventually. I still need the Neca S-Mart Ash from a few years ago, too. Great looking figures.

Just watched these movies and man am I regretting not getting some of these when they were at TRU. Looks like I'll most likely get to a pay a premium for my negligence!
T

check out BBTS.com - they've got deadite Ash/farewell to arms set of 2 and Henrietta all in stock at close to retail!

I got Deadite and Farwell to Arms Ash off Ebay for about $20 per including shipping. Not too bad.

Still need a lead on a sane priced Hero Ash! $35+ from eBay/Amazon just feels like too much to pay!

Just ordered ED2 series 2 off eBay. About $41 total, which I feel is great since that Hero Ash seems to go for $35+ alone.

Got all 4 figures for about $75, I think I did quite well for not buying them at retail when I could/should have!

Can anyone who has both the NECA Evil Dead 2 and Army of Darkness figures tell me if they are in scale with each other? I feel like someone has told me the AoD figs are a little bigger...
M

Picked up the S-Mart Ash from the Cult Classics line the other day at a flea market, still sealed in the package for $5. That's a steal, I would say. I passed on this figure so many times a few years back for some dumb reason, glad I had another chance.

Wow, great deal! I just got him last week for $25 shipped but I consider that a pretty good bargain compared to eBay and local shows.

If you open him, watch out for his tags. They are stickers and the sticky was cheap, has worn off and most ended up needing regluing. Couldn't find his nametag at all so I had to print out a tiny picture of it on label paper.

I also ended up grabbing Medieval Ash for the same price at a horror convention a month back. I got the second release on a cardback, wish I could have gotten the first release in the blister pack because from what I've seen they are painted MUCH better.

Sorta related, I might have a line locally on a NECA Bubba Ho-Tep Elvis/Sebastian Hoff figure for $10 and a McFarlane Ash Vs. Pit Witch set for around the same...
M

That's cool. I'm pretty sure the first release of Medieval Ash had a big base/stand thing, did the carded re-release have that too?

Bubba Ho Tep is an awesome movie, you just reminded me that I have both figures but never opened them for some reason. Actually have a bunch of older NECAs stored away that I still haven't opened (Kill Bill, pretty much all the POTC figures, a bunch of Cult Classics). One of these days I gotta free them all. Just have no shelf space.

Nope, mine didn't come with the stand. I forgot about that. I ordered the Donnie Darko Frank for my lady awhile back and it was a similar situation. She got one with a base and mailbox, and when I snagged the rerelease at retail he came standless.

That's okay, I order those Marauder stands for my NECA stuff. The paint thing bothers me more. Ash's face is just painted so badly it kinda doesn't look like Bruce.
M

Yeah, not sure what was up with those carded re-releases they did. I guess they were a cheaper option for those who missed out on stuff, but not including stuff like the bases is kinda lame. The paint on a few I've seen looked rushed, too.

Yeah, the paint hurts more than the base. This Ash is looking way off to the right and his pupils look like crap. I'm REALLY bad at repainting eyes, though I've never tried on anything bigger than a 3 3/4" figures.

The two NECA AoD figures are also indeed a little bit taller than their ED2 figures.

Picked up all 4 figures online over the last month and decided to build a diorama to photograph them in. More pics soon... beautiful. i want to make an Evil Dead 2 dio too but space is very limited. in the mean time Deadite Ash is standing on the old gnarled tree base that came with the McFarlane Toys Headless Horseman and Ash w/shotgun is standing in the Movie Maniacs 7 Leatherface base (great accessory, i don't even display that Leatherface lol)

I got from friend farewell to arms Ash with great price. I haven`t opened it yet.

The Witch From the Fruit Cellar by scarrviper, on Flickr Those are some pretty cool figures. I nearly bought Henrietta and an Ash except I only ever buy 3.75 scale human figures. I missed out on the Palisaide figures when they came out.

If you look near the 2 Witches in this pic you can see my 3 Necronomicons that I made. I have a possessed Deer head somewhere too. The second pic has me as Ash.

I have a Fisher Price figure I'm converting into Ash and eventually, I hope to make a Kandarian Demon (using Dragon puzzle wings), 2 headed Ash (with mini-Ashes), Henrietta and Ed. 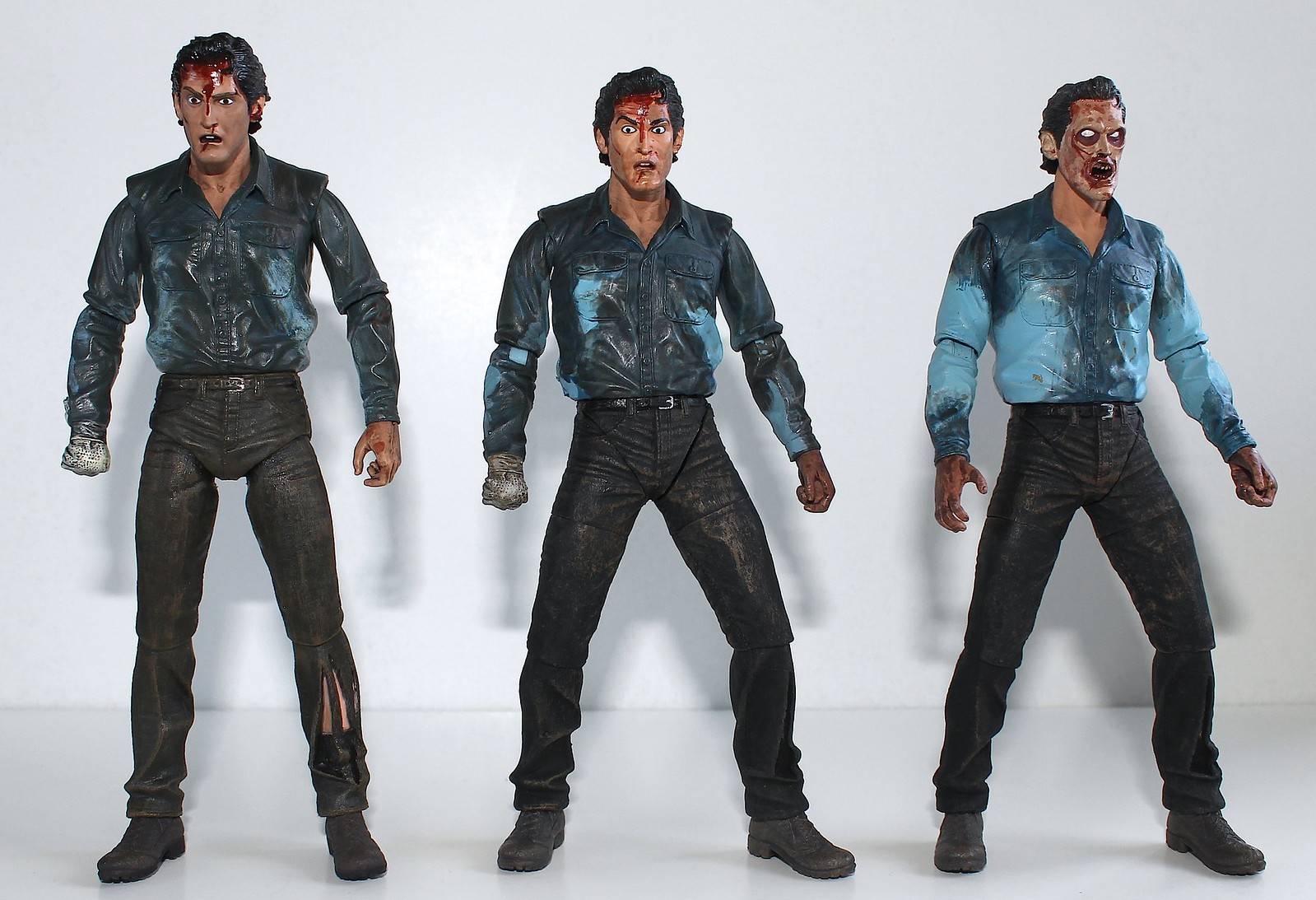 
From left to right - Ultimate, Farewell to arms, and Deadite. The older versions are still decent figures, but the new ultimate is superior. The new legs look so much better and the paint is also improved


I decided to put this together since I noticed some changes to his accessories. The new are on the left, old on the right.

Linda's head - Eyes are now all white, hair and blood colors slightly different. Skin has less pink to it.

Book of the Dead - Seems to be the same incorrect book as the original. My older copy has been customized to look more movie accurate. The one in the middle is a movie accurate version that came with the retro style deadite ash. It is a little large but I think it looks the best.

Axe- Handle is lighter and the green blood now has some black added and a nice coat of gloss over it which is noticeable in person.

Tape recorder - Reels are now grey/white and silver rather than brown and tan. Rest of the changes are very minor.

Possessed hand- Paint is less sloppy and darker, nails are better painted, as are the bones. Also has new blood spatter applied.

Shotgun - Very similar, but the stock now lacks the thick grain lines that were present on the original. I have repainted the forward grip on both to match the stock since on both versions Neca incorrectly painted it silver. 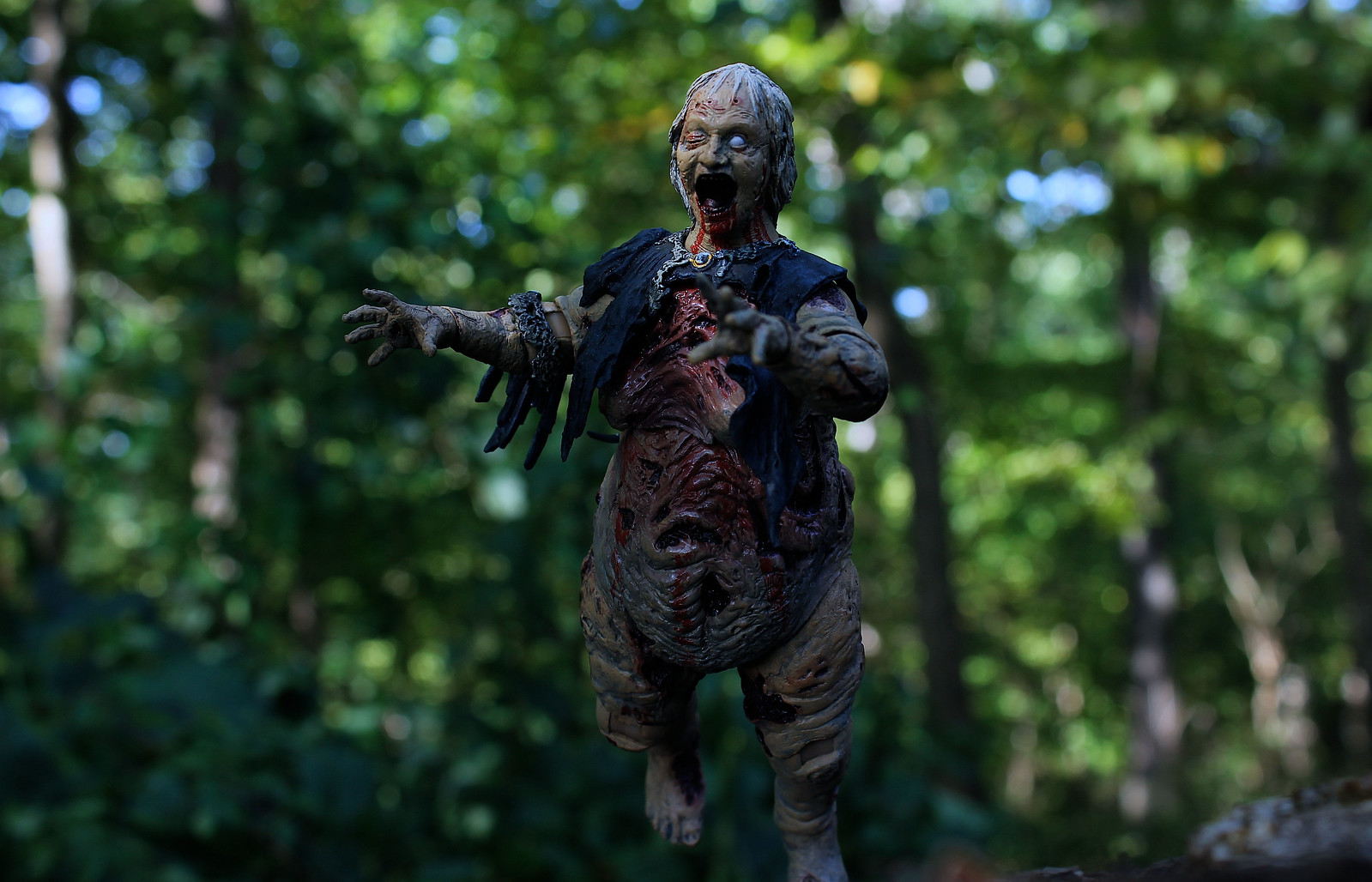 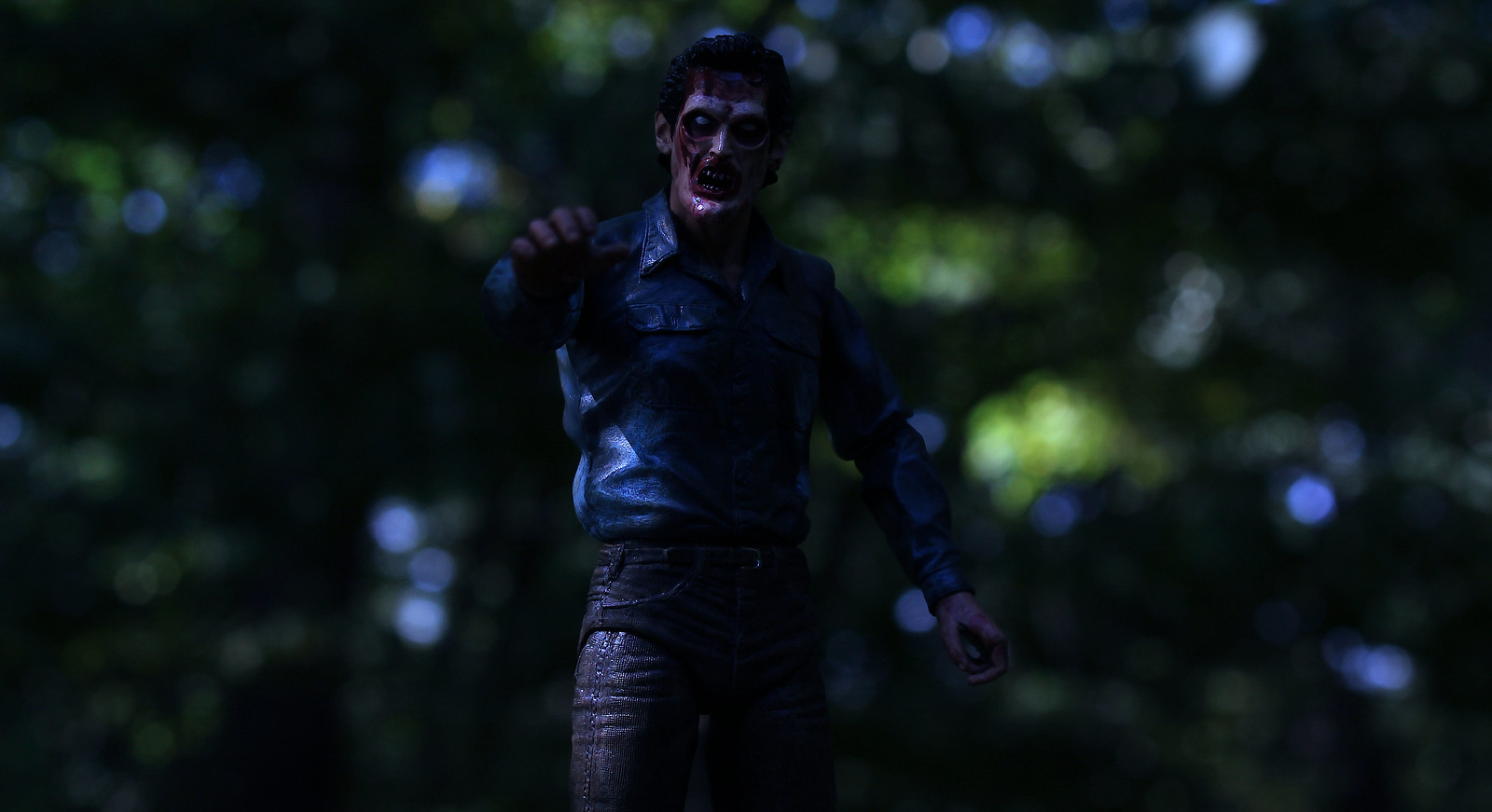 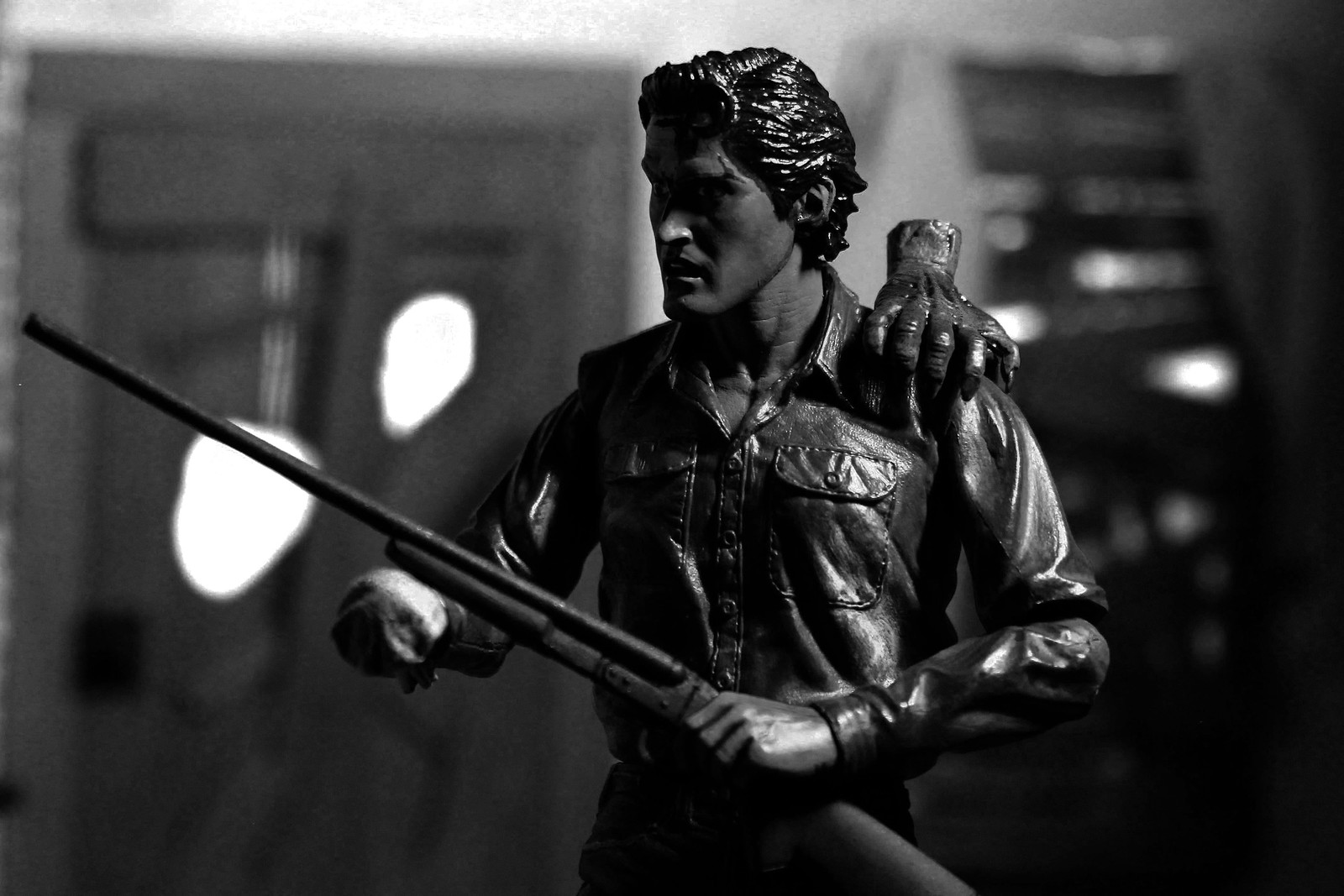 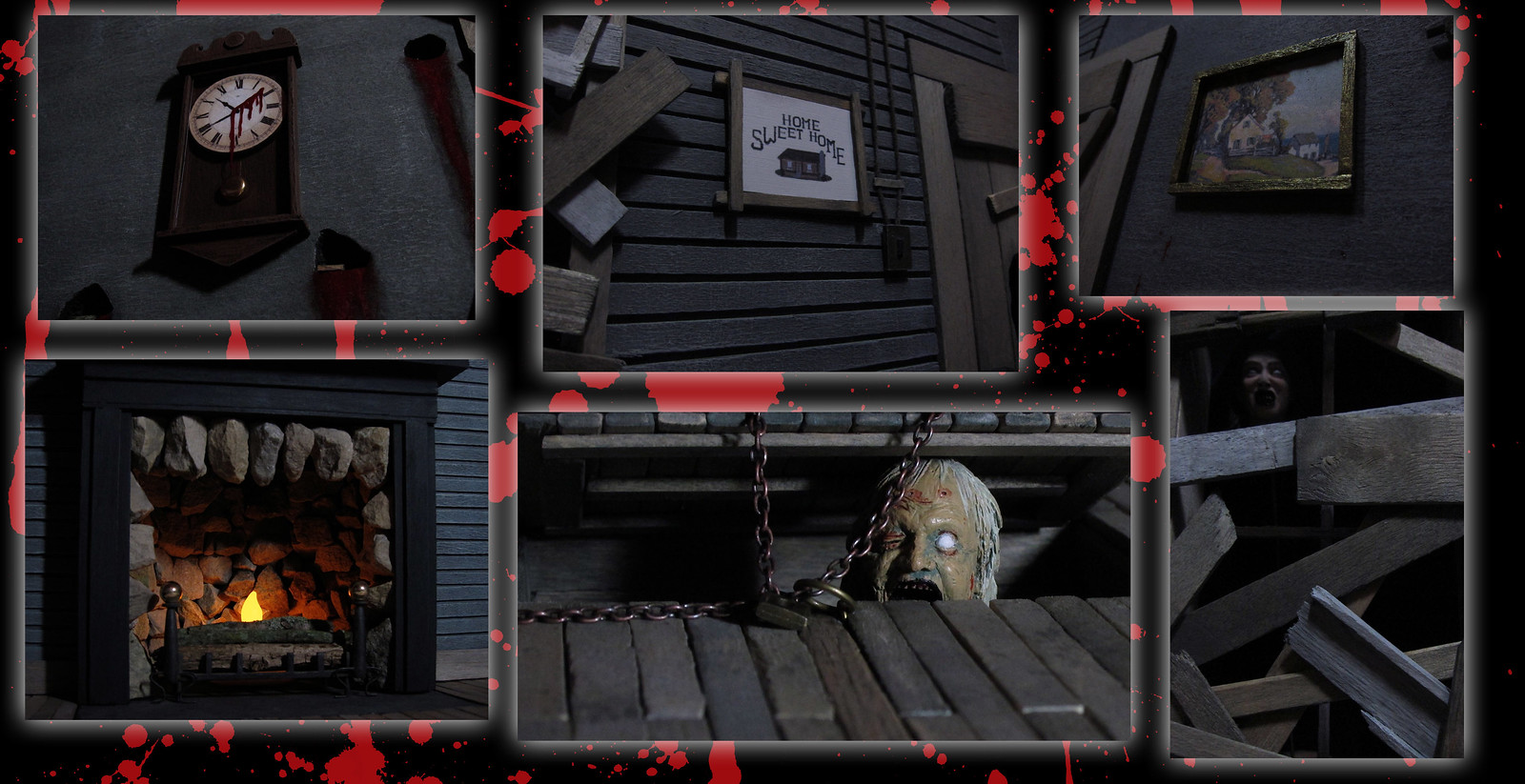 Here's some teasers of my new and improved cabin diorama. There's still lots of work to do, but I should have the cabin finished before the Ash and Ed two pack arrives. 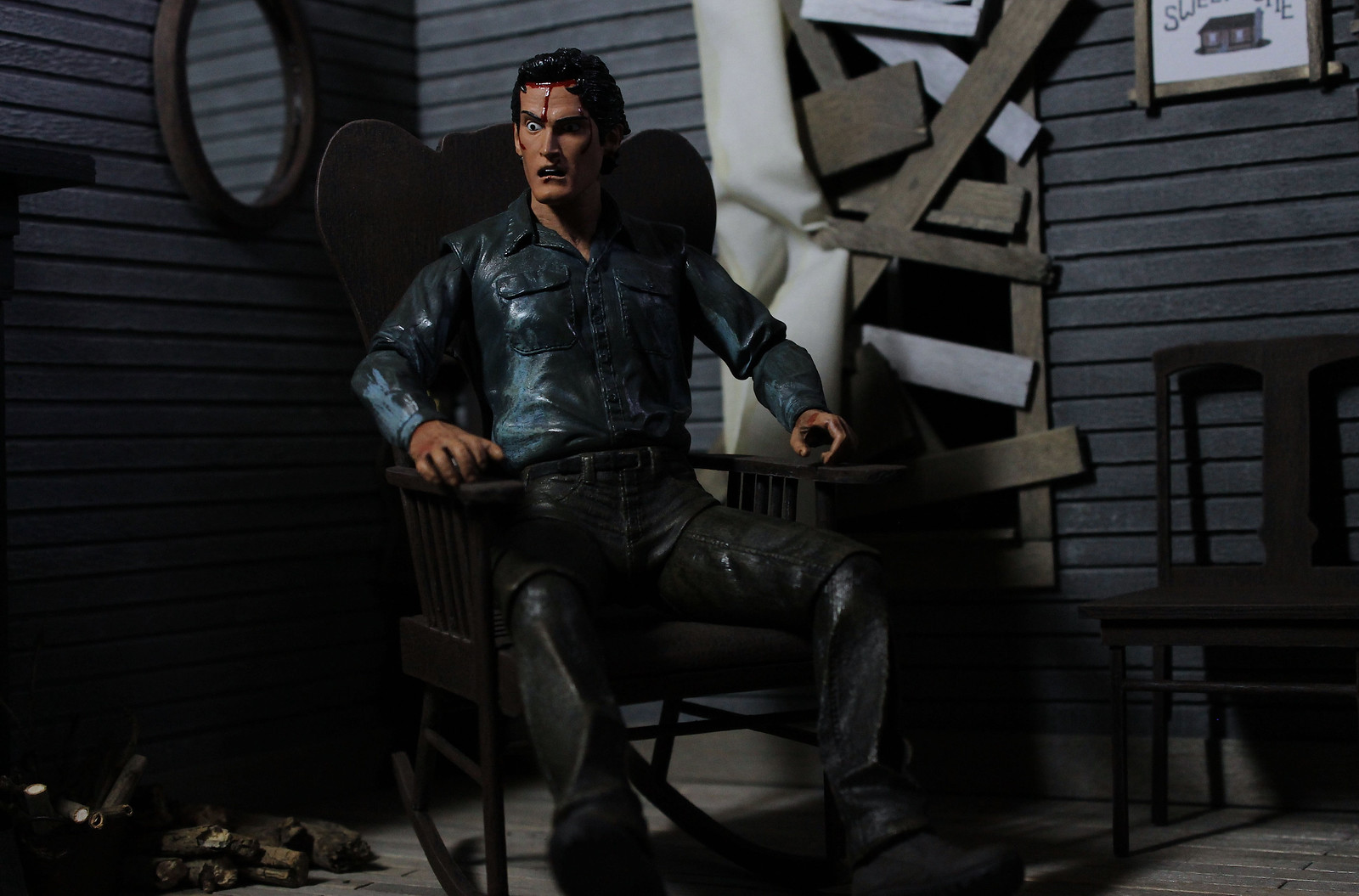 Those are really awesome!

I would have collected these if the scale was 3.75. The new figures for the TV series also look great. 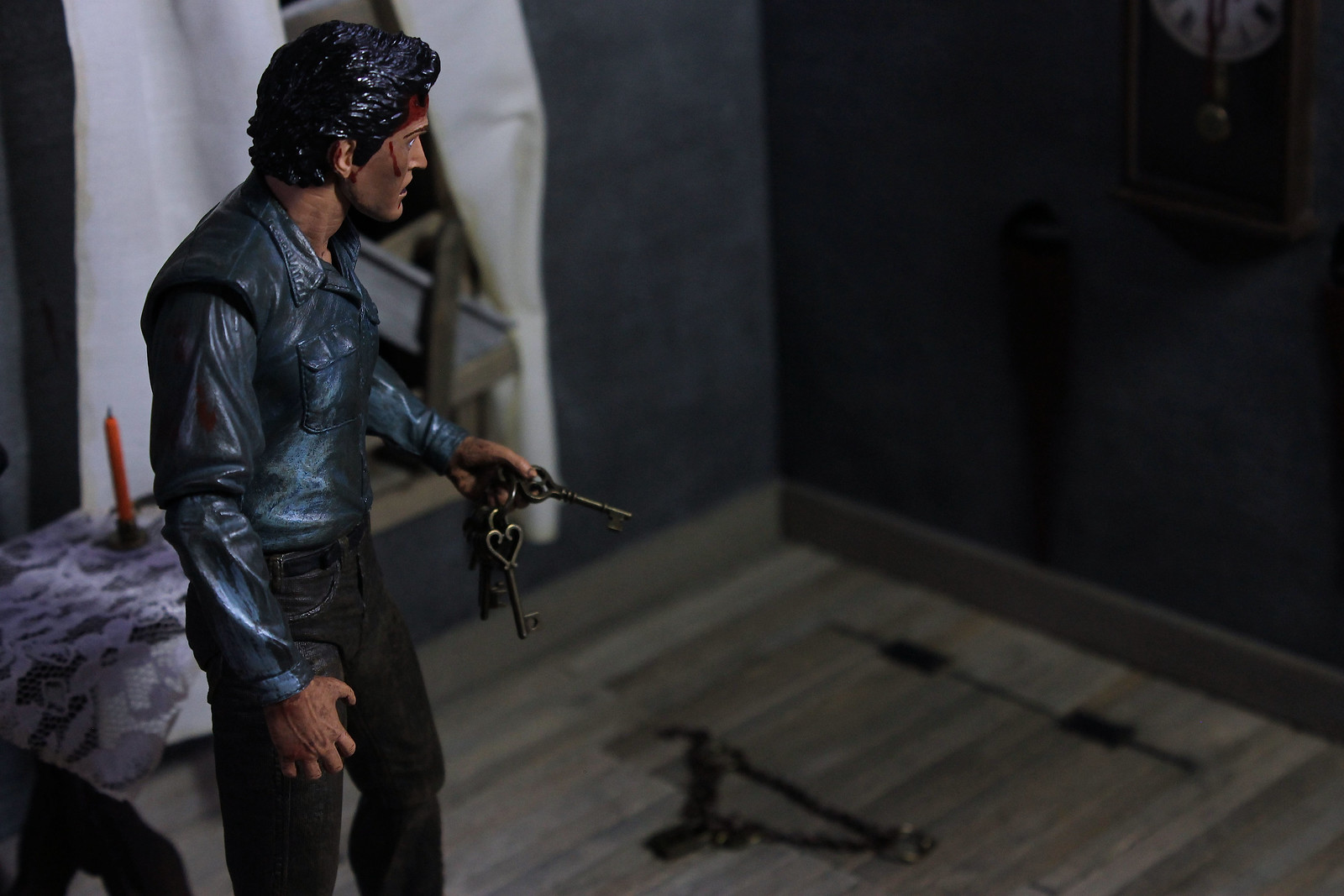 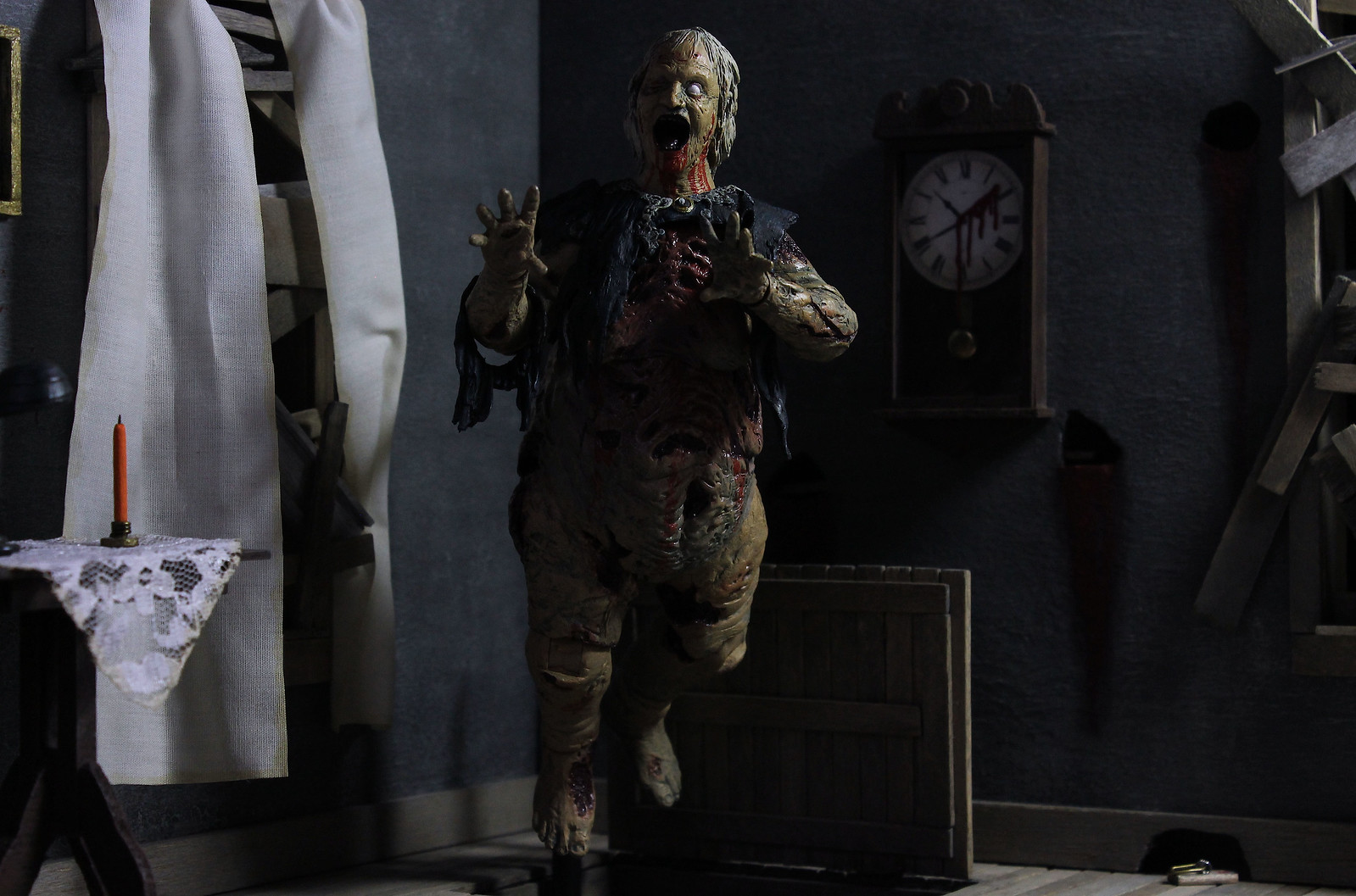 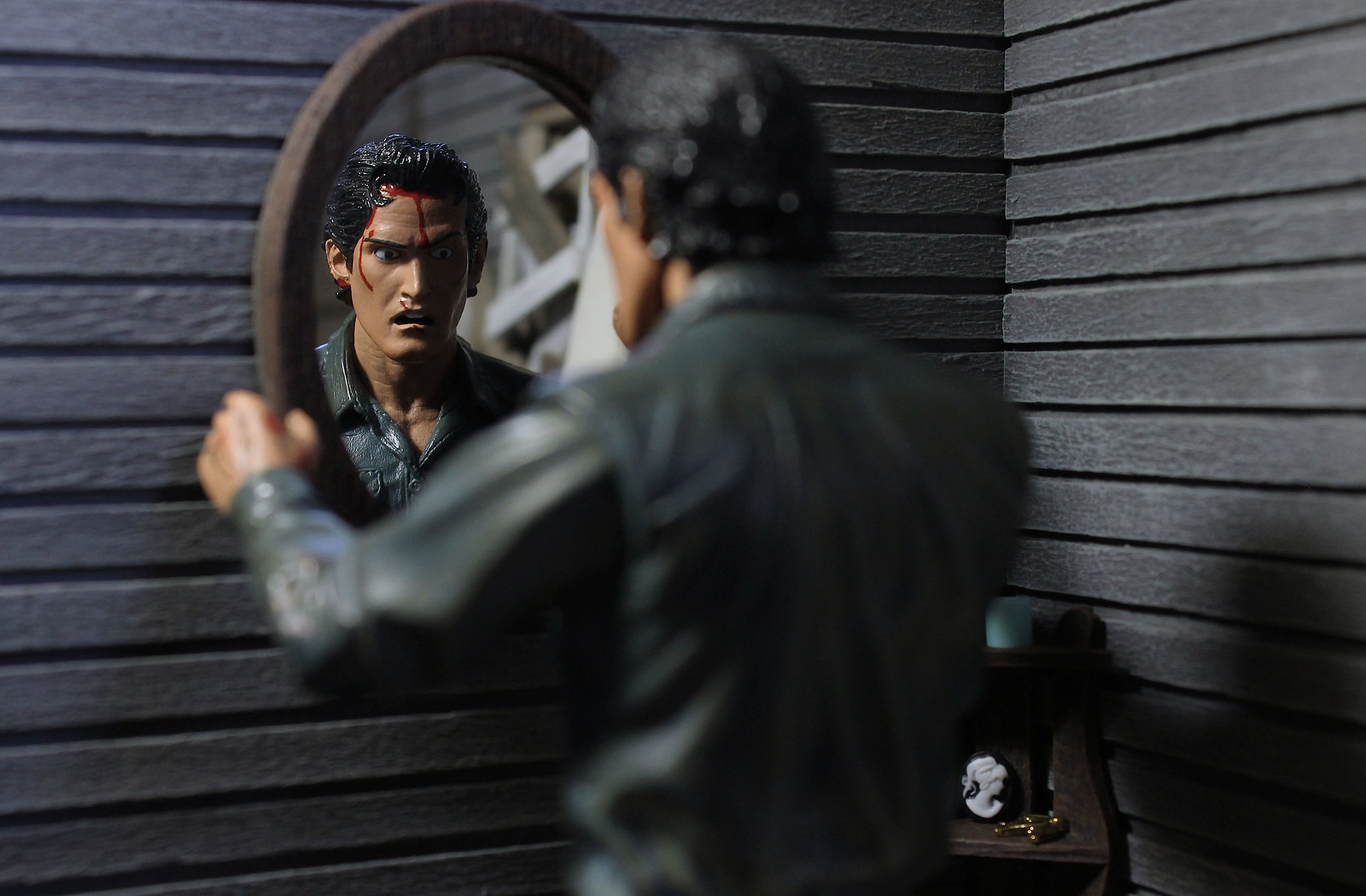 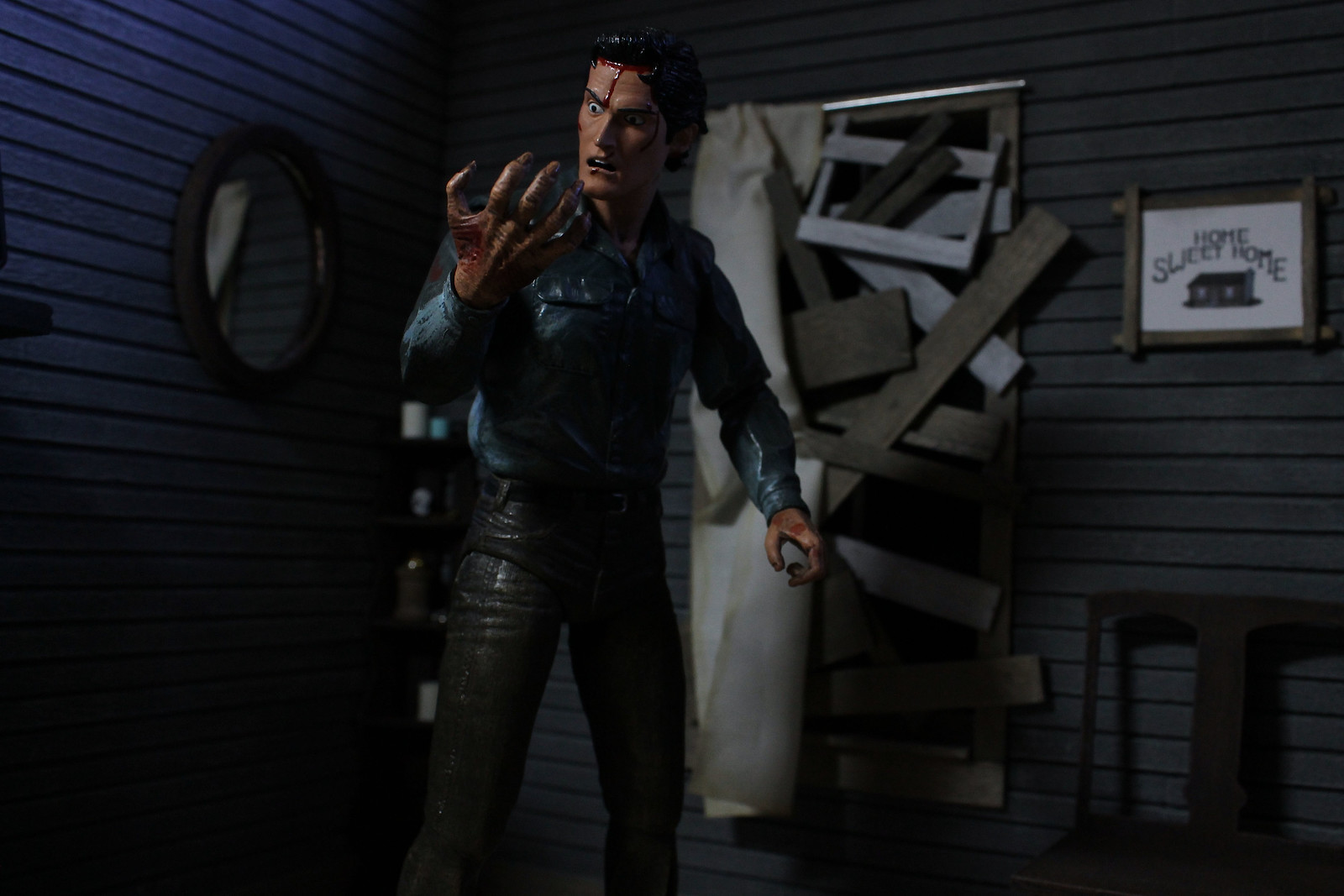