I bought another Millennium Falcon watch by Invicta. This one has a nicely done watch face featuring the top of the Falcon with the date etc shown through strategically placed holes. It also has a nice engraving on the back and is limited to an edition size of 1977 pieces.

As with my my other Invicta watch, it’s a little to chunky and in your face for me to wear. Definitely one for the collection.

My collecting has slowed down somewhat while I try and pay off a painting, but i'm still able to get some bits and bobs to keep it ticking over.

This week I ordered a Millennium Falcon candy vending machine. I thought it was a little different.

It's quite cute and I am pleased that it still has the sweets in it.

I also bought this light up lanyard.

It was a lit bigger than I expected and the Falcon is about six inches long.

Delivery charges for Ebay have shot up, haven't they?

I remember the Falcon candy machine...I think our Toy R Us’s had them back when.

My Dave Seeley Death Star Escape Painting arrived this afternoon and i'm very pleased with it.

It's oil on board and is just under 3ft by 4ft.

Mighty_Jabba said:
Have you seen this, Rod?

Anyone seen where you can get this??

I have seen it on the web, but I don't know where to order one from. I think it was an exclusive that could only be bought at this years SDCC.

Rodders said:
I have seen it on the web, but I don't know where to order one from. I think it was an exclusive that could only be bought at this years SDCC.
Click to expand...

I know you could pre-order it at Celebration Chicago as well, just not sure if those are the only ways to get it or if something else will open up? I have a special place in my heart for all things Falcon and Solo, so I want to get it now!

I'm not sure how to categorise this, or even confirm whether it's genuine, (although my gut says it is).

I recently bought this Millennium Falcon folder, complete with its presentation on eBay recently.

The vendor said that it was a Lucasfilm folder for a presentation that he got in a house sale. I've not seen such a thing before, so I figured, why not.

The presentation appears to be from Hasbro and it has warped somewhat over time. It wasn't cheap, but I really like it.

I'll get the Rise of Skywalker version this payday.

On my Action Fleet shelf I have a few versions of the Falcon.

The back row are all Action Fleets. The one on the left is Hasbro's version, which was customized into how the Falcon looked from ROTS (at least in Legends now). Then the next is the original from Galoob, then original from Hasbro, then the last one is another one from Galoob but customized into TFA. I added some weathering, blast marks, and the new dish is from the Falcon/Micro Machines Jakku playset. The new dish swapped perfectly, as if it was made for it. The 2 main figures are Rey and Finn, with Han, Chewie and BB-8 as extra figures.

For the bottom row, on the left is the Revell Falcon from Solo. Next is the Titanium Falcon. Last is the die-cast Falcon from Disney. The dish was swapped out again with the new dish from TFA. I felt like having 2 die-cast Falcons was like buying double, so that's why I did the dish swap for the Disney one.

On the right is the Revell Falcon for TFA, just weathered up. 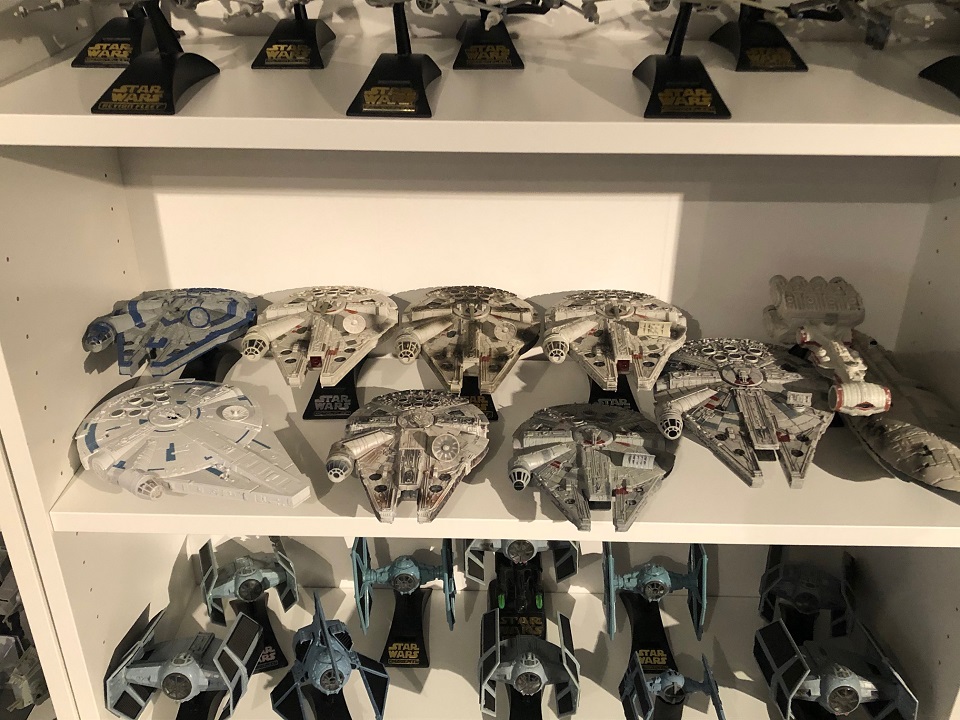 So. There's this homeless guy near where I work that paints these weird Abstract or Cubist paintings so that he doesn't have to beg. I asked him to paint me the Falcon his own style.

It's not to everyone's taste, but you've got to admire someone that gets up and does something rather than beg, right?

I love it. Unique to start off and even better with the story behind it.

I took delivery of Amazon's exclusive Han Solo and Millennium Falcon Funko Pop figure. I haven't had a chance to open it yet, but the box size is pretty impressive.

I picked up a pair of the new Adidas Millennium Falcon trainers yesterday.

At £160 RRP, they were pricey, but I figure they'll be highly collectible when they sell out.

Nice to see Adidas is still doing some Star Wars-related stuff (and that you're still sticking with your focus ). Looking at the rest of the collection, they seem a lot more subtle in their designs than the previous versions like my Jabba or Droids shoes.

As for the focus, i'm still really enjoying the collecting. The hunt for unusual or rare items definitely makes the hobby that much more interesting. The blog also helps, although it's not a good one, it does add something to hobby.

A few nice prints to add to my collection. Max Dalton's "That's No Moon".

I was also fortunate enough to pick up an artist proof of the Raid 71 Original Trilogy Prints. I missed out on the original offering, so I was delighted to get a set. What a piece of junk is my favourite.

I'm looking to pick up the Millennium Falcon wireless charger but it doesn't look like they ship to the UK. Can anyone help me out.

Stand down. It looks fake, or the seller is a very disreputable one.
Last edited: Jan 28, 2020

I bought this nice Japanese Tenugui.

Has anyone purchased a magnetic levitation falcon toy? I am not sure how many versions/scales there are but I am curious regarding the quality...

The Beast Kingdom one?

Rodders said:
The Beast Kingdom one?
Click to expand...

Yes, that one.. but I remember coming across some others on youtube.. I just don't know whether if those were custom built or licensed...

I think they were licenced. I have one at home, but have not removed it from the box.

Nice enough but the toy look kinda puts me of displaying it. I'd imagine people would be impressed with the floating function, though. There is a sequel trilogy one, but i haven't picked it up yet.

I have a couple of new additions for my collection this month.

The first is this 3d Falcon on a 2d Background from the Bradford Exchange. It was kind of tacky, It has an illuminated cockpit and six stars that light up on the background. It also plays the Star Wars theme, so I wasn't expecting too much. It was better than I hoped. Quite a decent size, the 3d part of the Falcon sticks out by about 13 inches, so some consideration needs to be given on where to hang it, or you'll have someone's eye out.

There were a few things that bothered me about this though.

The cockpit was very badly done, IMO. Almost an afterthought.

The legend at the top states SW/TFA, which really bugs me. As it features lighting, I really think that they missed a trick by not putting lights in the mandibles as well.

The final thing that bugged me was the fact that this appears to be an open edition and there is no numbering.

I was also able to get an SMT Millennium Falcon model kit. At the time, this was said to be the better version of any model at the time. Although not screen accurate, the designer, Alfred Wong really tried to capture the spirit of the Falcon. A cease and desist from Lucasfilm stopped the production of this kit. I imagine that this would be a hard to find item.

This is a recast from Alfred Wong's original model, which was simplified by SMT to make it easier to cast. Don had to 3d print a set of quad guns as his originals had been lost. Still, it's a 20 year old kit.

Quite weighty. I haven't unboxed it yet, but I am pleased with it.

Still on the look out for an Original SMT kit and the Anigrand kit.
Last edited: Mar 8, 2020

Rodders said:
I picked up a pair of the new Adidas Millennium Falcon trainers yesterday.

At £160 RRP, they were pricey, but I figure they'll be highly collectible when they sell out.
Click to expand...

I bought them as well, also the X-Wing sneakers for just 70 Euro. They arrived today and in person they look as good as the Falcon sneakers.

Here some pics of my Falcon Sneakers:

Thanks Chewie Gum. Maybe I should pick up a second pair to wear. 70 Euros is a great price.

Difficult to display, though.

I need those here in Germany
Chris

Hi Chewiegum. Did you have any joy finding the Attakus Millennium Falcon diorama?

My EFX Signature Edition Falcon arrived this morning, on Star Wars day, no less. Mine is 25 of 25.

I am pleased that they didn't try to completed it by adding a computer generated signature after Peter Mayhew's sad passing, so I think it's respectful that the area where his signature was going to go was left blank. After spending $3k on this, I was a little disappointed that the engraving on the edition size wasn't completed. Not a big problem, but QC could be better.

I was also really pleased to receive this Build your Own Cookie Millennium Falcon from Australia. It is intact and the Gingerbread biscuit is about 8" long.

Food collectible are few and far between, so I am very pleased with this.

I managed to plug two Lego shaped holes in my collection today. These two polybags were released in 2018 and 2019 respectively.

I bought this cocktail strainer from the Mover and Shaker Co.

It's an unusual addition to my collection.

I bought these four micro paintings by Artist Bill Madia. They are 4" by 2" and a genuine paintings on canvas. They were $50 each, but that's not bad for an original piece of art. I'm really pleased with them and I hope that I add more of them to my collection.

My regular and variant prints of Mark Daniel's "Welcome to Bespin" arrived this morning. I got number 1 on both versions.

I picked up a 1:6 Cargo Hold Diorama from Jazzinc. No photos yet, but I'll post some when I finally get around to unpacking it. (It is huge though, so I'm dreading how big their cockpit diorama will be. (There is a possibility that I have made a mistake there. )
You must log in or register to reply here.

E
Places who will take an entire collection?