So found all the pics, gotta say as long as distribution is good, this line looks pretty epic. I am not as crazy as I was about the Mega Forms, but as Zord controllers they are great, and Samurai Gold's Mega actually looks really awesome. Glad we're getting Rita, and really glad we are getting articulated regular Ranger forms.
S

So I ordered the Japanese Beetle Origami and Sushi Origami (Squid) from Shinkenger and got them today. They are so much bigger and better than the American counterparts. Really wish I could find a Shinken-Oh that was not $200. At least gonna try and build the Megazord made with the Swordfish and Tiger since they are realitvely cheap still and easy to find. The Sushi Origami has not made its appearanc ein America yet, as it belongs to Samurai Gold, but the Beetle Origami is at least two, maybe three times as big as the American Beetle Zord. I don't know why Bandai decided to start dumbing down our Megazords, but even if I like the American versions of a series, may start importanting my PR/Sentai mecha. Really thinking of getting the Gokaiger mecha now.

I was going to start a new thread for the 20th anniversary stuff that came out this year but then just decided to revive this one instead. I just received my White and Green Ranger S.H. Figuarts and they are by far the best articulated figures made so far. I also found in retail the new White Ranger Deluxe Armored and earlier in the year picked up the Megazord(TRU exclusive). I can't wait to get them signed by JDF at next years Philly Comic Con. Anyone else been collecting this stuff or from previous years. I'm still in need of the 4" White Ranger from the 2010 line MOC if anyone has to trade or sell?

What's the White Ranger Deluxe Armored that you found? Haven't heard about it. I was a huge fan of MMPR growing up but lost interest as I got older, but I'll always have a soft spot for anything related to the Green and White Ranger. Tommy was always my favorite. I plan on buying both of the Figuarts figures. Right now my current collection just consists of the Green and White Super Power Legends figures from a few years ago, and the Super Legends Extreme Green Ranger.

Oh wow. That's awesome. I gotta get it. How much was it at Target?


Wonder if they have plans for the Green Ranger?

I believe it was 16.99 plus tax. I would want a Green Ranger also but I think they see how well each wave sells before they announce anything new?

I checked at Target tonight but didn't see it. I'll give TRU and Walmart a check tomorrow if I have the time.

Gambit said:
I checked at Target tonight but didn't see it. I'll give TRU and Walmart a check tomorrow if I have the time.
Click to expand...

Good luck to ya...If I see another one I'll pick it up and if you are interested in it we could work something out?

Yeah, that would be cool, thanks for offering. Have some stuff to trade or I'll just pay for it, whichever you prefer. But I want to see if I can find it first. Got a few more stores to check.
A

I stare at that Megazord every time I go to TRU but can never pull the trigger.

Ackbar254 said:
I stare at that Megazord every time I go to TRU but can never pull the trigger.
Click to expand...

Did you pull the trigger on the Morpher already?
A

No, I'll just keep putting it off till its sold out then moan and groan and buy one marked up on eBay. That's the way it always goes. I've been doing that with the SH Figuarts too. My biggest obstacle to starting that collection is there is no Putties, Goldar, or Lord Zedd! A ranger needs do defend against SOMETHING or there's no point of having any. Sorry, my midnight rant.
Last edited: Oct 18, 2013

If SH Figuarts does do villains, I hope they do an updated Ivan Ooze. I see morphers every time I go to TRU and waiting for them to go on clearance some time next year.

Ackbar254 said:
No, I'll just keep putting it off till its sold out then moan and groan and buy one marked up on eBay. That's the way it always goes. I've been doing that with the SH Figuarts too. My biggest obstacle to starting that collection is there is no Putties, Goldar, or Lord Zedd! A ranger needs do defend against SOMETHING or there's no point of having any. Sorry, my midnight rant.
Click to expand...

That would be cool! I wouldn't pull the trigger on a single putty though, I would on a Goldar and Zedd of course!


CaptainC said:
If SH Figuarts does do villains, I hope they do an updated Ivan Ooze. I see morphers every time I go to TRU and waiting for them to go on clearance some time next year.
Click to expand...

An Ivan Ooze is interesting. I used the 20% coupon on a Legacy Morpher, got it for $42 shipped I do believe.

Picked these up on-sale at Target.

Picked these up thanks to a tokusatsu web-site.

How much was the White Ranger on sale for? I picked him last week at Target but he wasn't on sale. Cool figure though. Just read that they're going to do the Green Ranger so I'll definitely be getting him too.
P

Received my first Figuarts today, the Green Ranger. I'm planning to get the whole team, but I'm undecided about White.

I do have several MOC 1993-1995 figures (most of them signed), and a loose set of the Power Morphin' 5" line. I'm looking for a non-movie/metallic White right now.

My Green/White Legacy Morpher shipped today, and I have a second regular Legacy Morpher waiting for Starlight.Studios' Ninja coins, which will be available next month.

I do limit myself to MMPR, though. The only exceptions are my Pink Zeo Ranger figure (signed by Catherine Sutherland, because they never made a Kat MMPR figure), and Samurai Rita figure (signed by Barbara Goodson).

pohatu771 said:
Received my first Figuarts today, the Green Ranger. I'm planning to get the whole team, but I'm undecided about White.
Click to expand...

It's exactly the same for me. I always wanted the Green Ranger as a kid but never got him. The figure is awesome. I like the White Ranger, I just don't know if I need white and green at that price point. It looks the remaining rangers are coming out this year though.
P

Inching forward on my 1993-1995 5" figures, I am currently the high bidder on two different auctions that include a White Ranger, as well as the rest of the team. I already have the rest, but I'm open to upgrading the condition, or just reselling them. I already have Saba and the back part of his armor, so I'm looking at any non-yellow figure, and keeping an eye open for the front part of the armor.

I also bid on an auction for a Green Ranger and a Black Ranger - Adam - with no accessories, but was outbid. A few hours later, I noticed it was delisted, so I contacted the seller. The person who outbid me decided that they didn't have enough money, so I offered my original bid (before anyone else was bidding), and they relisted as Buy It Now for me... so now I have Adam on the way. There are a few Aisha/Yellow Rangers on eBay right now, but they are a bit more than I'm typically willing to spend. Rocky/Red seems to be the hard one to find.

[EDIT] One auction ended and won this morning. Still the high bidder on the other, but won't be raising my bid. I'll pick whichever figures are nicer than what I have, and pass the rest on.
Last edited: Jan 24, 2014

Gambit said:
How much was the White Ranger on sale for? I picked him last week at Target but he wasn't on sale. Cool figure though. Just read that they're going to do the Green Ranger so I'll definitely be getting him too.
Click to expand...

The White Ranger in question was $16.99 at Target, but is now clearanced out. Other chains might have it, but Super MegaForce assortments (with Green Ranger) are shipping.

In other news, I have my Adam Black Ranger. I'm keeping eyes out for Rocky and Aisha. I also got the Pink ranger Figuarts this week. Waiting for Red to be a good price.

Good thing I bought mine when I did.

The Dragonzord is up for preorder at TRU.com for ten dollars less than BBTS or EE and it includes free shipping Power Rangers Legacy Megazord - Bandai - Toys "R" Us

Picked these up today.

Pre-ordered a Dragonzord from Toys R Us and from Amazon. Amazon's was less, but I'm keeping both in case one gets canceled.

My Dragon Dagger should be shipping tomorrow from Toys R Us. I'll cancel my Amazon order when it arrives.
Last edited: Mar 9, 2014

Got Figuarts Pink Ranger, Red Ranger, Armored Red Ranger, White Ranger, and Green Ranger over the past week. Also picked up the six helmet bust at TRU for $15!
P

Got my Dragonzord yesterday.

I'm still watching for good prices (around $30) for the reset of the Figuarts, and Auto Morphin' Series 2 Rocky, and Series 3 Billy and Adam. I still need another White Ranger armor, also.

Titanus Zord and Legacy Zedd up for preorder at TRU

I was digging through the attic and went through some boxes of old action figures that me and my brother bought back in the mid late 1990s when Power Rangers would come on Fox at 3 or 3:30 pm after school.

Did I miss a thread about the Lightning collection somewhere?!?

I only collect MMPR Lightning Collection.

I'm holding out for a non Dragon Shield version. They just announced a MMPR Red Ranger without the shield today so hopefully it won't be long...

So I couldn't hold out and got the Drgon shield black ranger and just ditched the shield and swapped out his biceps.

I also found the MMPR Red Ranger at Target today, so that wave is out if you're looking...

Got the regular Red Ranger yesterday and picked up the Dragon Shield Red Ranger from the SDCC set I split with a buddy. 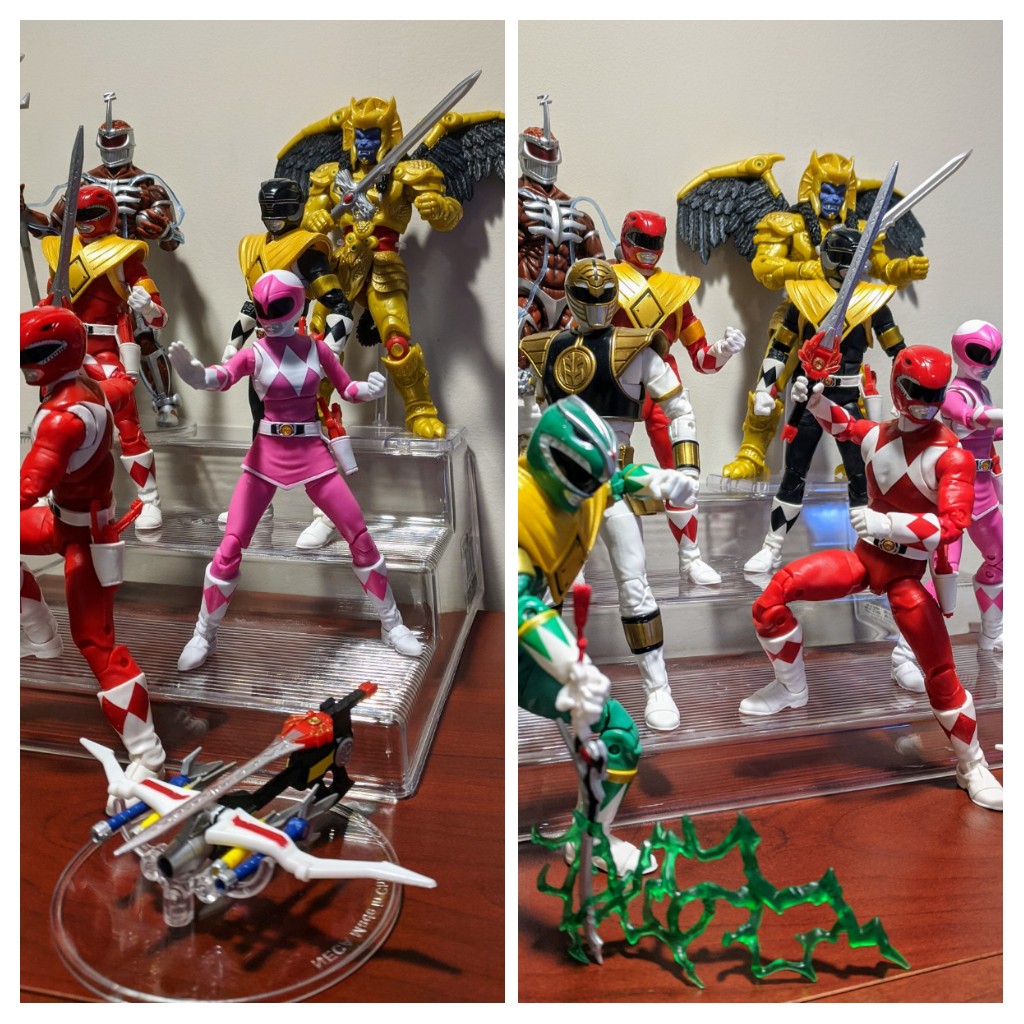 My Amazon order for Lord Drakkon just shipped. It was originally scheduled to arrive in January 2020. Not a bad little Christmas surprise

I'm digging this line so far, but Ita gonna be hard for me stick with it without some more monsters. Until then, I'm on board for the rest of the mighty morphin team and the Gold Zeo ranger (wasn't quick enough on the draw for the SDCC set).

Added Lord Drakkon to my display this week. Another stellar figure. I admittedly don't know much about the character outside the fact that it's an alternative universe Tommy Oliver but it looks like a badass character. 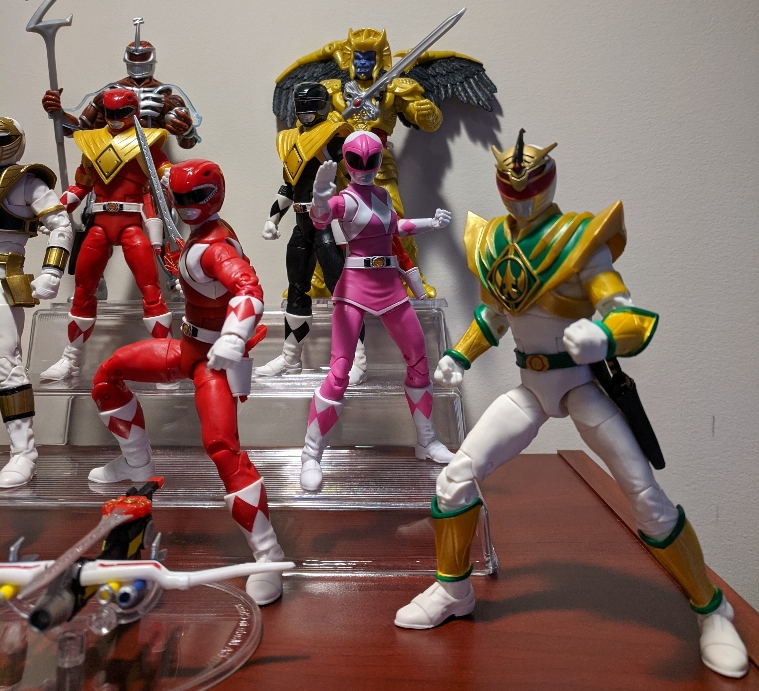 I got my MMPR yellow Ranger from Pulse but she's got two right forearms!

Has anyone made any returns through Pulse?
C