McFarlane has released a new 7 inch scale Kirk and Picard.

I have the Kirk and am going to order the Picard soon. The Kirk is the most accurate Kirk under 12 inched I have owned and I hope many more come from this line 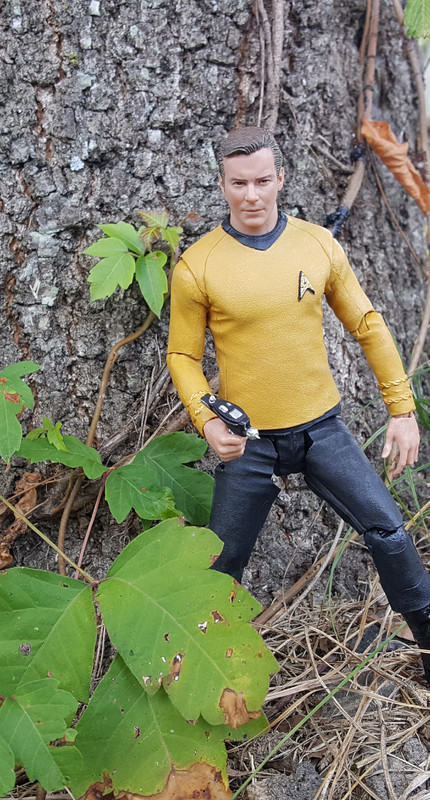 Kirk is a definite want. I noticed the blue colored phaser on the website which maybe a color deception from the original prop showing up in the airing of the original show, similar in fashion like the colors on the bridge set. I'd need to brush up about that though.
T

A McFarlane line of Classic Trek figures is something I've always thought would be interesting, due to the elaborate sculpts in this line.

However, before I start collecting these - I do have some questions/concerns:

1) Some McFarlane toys I've gotten in the past have had terrible quality control - i.e., the figures have fallen apart, broken easily, etc. As a result of this, I haven't gotten that many. I would hope that issue has been straightened out, since I wouldn't want to open the package & have the figure(s) fall apart on me.

2) How far-reaching will this line be? They're only coming out with Kirk & Picard at this point. I don't have any interest in collecting any Trek figures other than from TOS/Classic era. So, if there will only be a handful of TOS figures I'm not sure I want to invest in these.

ThallJoben said:
2) How far-reaching will this line be? They're only coming out with Kirk & Picard at this point. I don't have any interest in collecting any Trek figures other than from TOS/Classic era. So, if there will only be a handful of TOS figures I'm not sure I want to invest in these.

I saw these in a Game Stop on Friday and according to the back of the card, Michael Burnham from Discovery and a TOS Spock are the next two figures planned. The pictures are of the actors, not figures.

I have to say, I'm not crazy about the likenesses on these so far. Kirk is OK, but there's something off about Picard. His face looks squinty or something.

And yeah, as you said, how far will this line go? That's always going to be the issue with a new line of Star Trek toys. It's such a vast property that it's hard to do it justice starting from scratch. I agree that I'm not really all that interested in collecting the line if they'll never get to some of the more obscure characters. On the other hand, the more extensive the line, the more money I spend so I'm not sure which is worse. At this point I'm waiting to see how the line pans out.

Having said all that, if they start making Deep Space Nine figures I doubt I'll be able to resist buying them.
D

I've personally got a sizeable Star Trek Art Asylum/Diamond Select Toys figure collection, but the Kirk shown above has got me sold on it. Admittedly, I might feel regretful collecting another Trek line if it gets quite expansive (and expensive) which in my case I'd consider letting go my AA/DST collection of fund this line. So yeah, we'll see where the line goes. ​

Got the Kirk today. Looks great in the box.

Can't wait for Spock and McCoy. But, I can't see myself being too bothered about getting anyone else beyond the three lads. Maybe Uhura or Sulu or Yeoman Rand or a red shirt...LOL?

Any news on how these are doing and when we can expect the Spock to be released?

I had forgotten about these figures but just found Kirk today at Walgreens. I've gotten a few McFarlane figures in the past and really got into their Walking Dead line, so I thought I knew about what to expect, but I am really impressed with this figure! Sure, he's not "super articulated" (didn't expect him to be) but there is a very nice balance of articulation to aesthetics IMO. He also just feels "solid". I think the head sculpt is pretty dead on. I really couldn't be any happier with him...can't wait to get Spock!