Luke Skywalker (Heir to the Empire)

Ugh. Yes, I’ll likely be getting this, but they’d BETTER get the paint apps better on the face better than every Dagobah release. Another accessory woulda been nice. I’d settle for better eyes on this Luke though.

And why not a belt that looks like the one on the cover?

But seriously, just fix the eyes and make it consistent and I’ll be so happy

Just the abject laziness of the offerings from Hasbroken are so bad they're actually phenomenal. <is that possible?

Why include pictures to show how wrong your figure is? And why would Luke come with a 'force cancelling' Ysalamiri?

This is the very definition of underwhelming. Luke Skywalker deserves better than this. The only thing I'm interested in is the Ysalamiri to go with Thrawn.

The Heir to the Empire Luke from almost 20 years ago was better. This is just “Luke in a tank top.”
Easy pass along with the dumb rabbit toy.

Also, look at his boots.
They just painted the last figure black and called it new!

Sucker me in with a stormtrooper repaint, Hasbro. Not this lazy garbage.

This was a solid pass for me. Till I saw they packed him with the damn Ysalami-eerie. And I DO really like the packaging. I might bite for the box and the ysalamiri. I've paid more for less, in this hobby...

When I first heard Hasbro was going to release an Heir to the Empire Luke, I was so excited, but this is just a shameless cash grab. And like @RadioNixon said, why couldn't they have at least given us the belt in the reference picture?

Tai-Gon Jair said:
When I first heard Hasbro was going to release an Heir to the Empire Luke, I was so excited, but this is just a shameless cash grab. And like @RadioNixon said, why couldn't they have at least given us the belt in the reference picture?
Click to expand...

If they were going to so completely reuse the Dagobah sculpt, this needed three things: a belt that distinguished the figure, a hairpiece that matches the artwork better, and perhaps a black Jedi cape as well. The ysalamir really has nothing to do with Luke, it's like if a ROTJ Luke came with the emperor's force lightning.

Unless I can find this one on clearance somewhere, it will break my string of owning every Black Series Luke.

I sense a great disturbance in the force, as if millions of pegs felt themselves getting very warm!

Dark Dago-baahhh Luke and a french frie critter...
Maybe for customizers to make a Sith version of Luke.
Verdict: Pass (I'm not a customizer).

Edit: It kind of looks like hair-metal boots he's wearing. Slap on a long-hair piece and add some make up, boom! Mötley Crüe or something

Oofa said:
Dark Dago-baahhh Luke and a french frie critter...
Maybe for customizers to make a Sith version of Luke.
Verdict: Pass (I'm not a customizer).

Edit: It kind of looks like hair-metal boots he's wearing. Slap on a long-hair piece and add some make up, boom! Mötley Crüe or something
Click to expand...

Hahahahaha! When I first saw the Luke in packaging this morning, I thought that orange thing was Mara Jade's hair.

Bosski said:
Hahahahaha! When I first saw the Luke in packaging this morning, I thought that orange thing was Mara Jade's hair.
Click to expand...

I had that very same idea at the first glimpse... "wth?"

Bosski said:
Hahahahaha! When I first saw the Luke in packaging this morning, I thought that orange thing was Mara Jade's hair.
Click to expand...

Actually... I really hope someone buys it and turns it into a hair-metal-wannabe figure

Haha, it just clicked with me, to add insult to the repainted injury... the accessory doesn't even go with Luke.

Hope someone makes a mould of the Ysalamiri and sells castings of it, I'd like one for Thrawn but there's no chance in hell I'll be getting this.
N

I don't really care for this. However, I may have considered picking him up if they gave him a belt. Kinda like this. 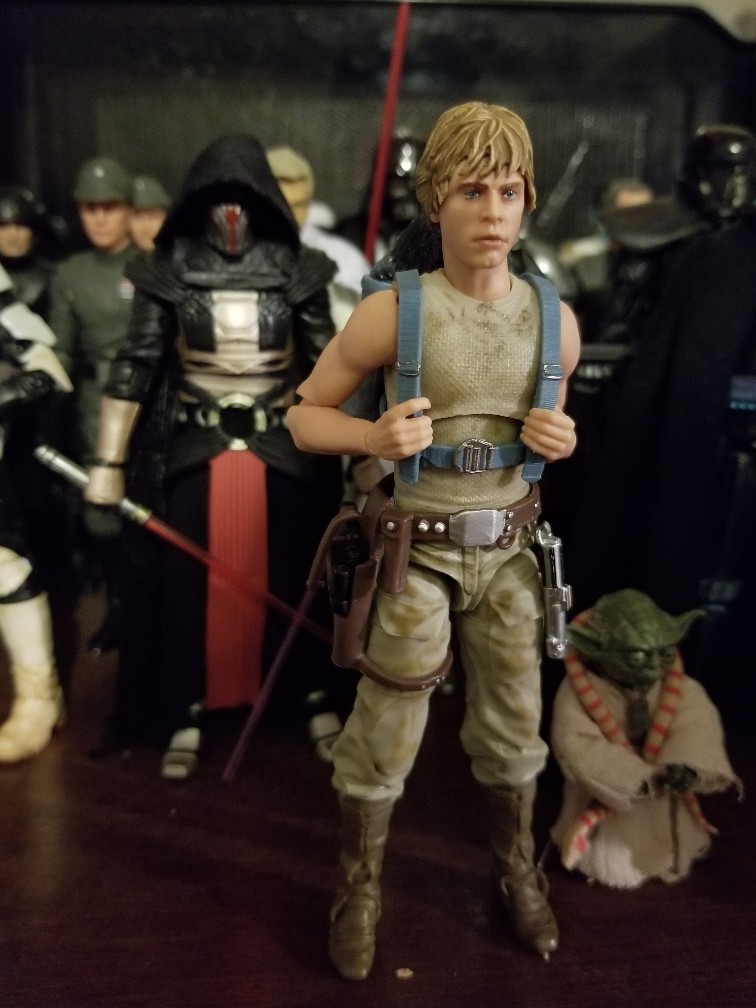 I know it's not accurate but at least I get the perception of better value just cause he won't look so plain. I'm talking about the belt, not the backpack.

im not a customizer any more, and i like to support any extension of the main line in order to further propel the release of new characters or pre-existing characters in new outfits, so ill definitely bite.

Looks fine, but not an exciting figure in my opinion.

"Well, here's a thing we costed out of Thrawn and is just a low cost slug and the Luke is a 100% repaint."

Doesn't look great, although this might just be a prototype, so let's hope it improves slightly upon release.

Pretty lazy, it could pass as some dude's custom on ebay. Shouldn't his pants be more of a blueish color? They should of went for more of a match on that cover version. Give the saber that white blade, faded blue pants even something of a belt cause to make it more accurate.

And if I saw a customizer do something like that, I would applaud the effort, working with what we have to work with. But I expect more from an official Hasbro released figure. My gosh, they could at least have given him a new belt, new hair with ROTJ side part, and maybe Jedi Luke's legs instead of Bespin Luke's.

I pick this one up because I'm such a sucker for anything related to the Thrawn trilogy.

Super lazy. And I'm usually a sucker for Lukes!

Agreed on the lazy part but I'll grab this. As others said, the Ysalamiri will go great with Thrawn. I'm surprised there isn't "Legends" on the box similar to Jaina Solo.

Repaint The Degobah Luke black and give him the Jedi Luke Saber with a little orange piece of Plastic. Easy Pass for me. That Sith Apprentice Darth Maul though? Bought.

If you guys think Hasbro are lazy because of one repaint... the Doctor Who toy line here in the UK is literally being kept alive on re-releases, repaints and re-uses of old parts. It's quite common in other toy lines. We Star Wars fans don't know how spoilt we usually are! I think we can survive one repainted Luke!

As I've said elsewhere, I think it would have gone a long way if they'd have at least made a new/different head sculpt. As far as the customizing aspect, sure anyone could just repaint this figure themselves, but considering you'd have to buy another Dagobah figure anyways this takes all the work out of it.

Also I feel this release was just a way to sell you the Ysalamiri for $20 because you'll need it to go with Thrawn! lol Considering they could have just included it with Thrawn's reissue. As I've already mention in another thread that Luke wouldn't be carrying a Force blocker around with him...
N

This is a lazy repaint. I do however like how he looks in black. The belt would have been nice whether it were accurate or not just from a value perspective.

I would like that Ysalamiri to put on Thrawn. If I see it in person and it isn't exclusive priced, then I may pick one up just for fun.

I just hope they glue his hair on properly and not have it sit way too high on his head. 95% of the Luke/Yoda 2-packs I saw in stores were simply horrible with regard to how they assembled Luke's hair. I think I returned and rebought that thing 3 times before settling on a decent one.

For a repaint I don’t mind this one, luckily its a good sculpt of Luke to begin with.
You must log in or register to reply here.