EnigmaticOne said:
Wait, I thought the figure we got was Mandalore the Indomitable, not Mandalore the Ultimate.
Click to expand...

It was Mandalore the Indomitable. He's from the storyline/era of Ulic Qel-Droma and Exar Kun. That pre-dates the events of KOTOR.

I also cheat and put Nein Nunb and Ten Numb pilots with 'em as they're pretty much the same as the Sullustans in the game.

Plus two Gammys even though they're technically not very accurate.

As a KotOR fan since the beginning and Droid enthusiast, I simply cannot call it a day until T3-M4 is made!
Even then I still want a major players like Sion, Visas Marr, and Juhani.

Sion is a major Villain, and the other two have pivotal character arcs with the player.
And look cool!
I actually think the Atris has the best chance to get made, as it only requires a Jocasta Nu repaint and new head.

While there are quite a few I'd like to have, I can call my collection complete with T3-M4 and Darth Sion.

Of course from the comics I'd like Demagol, and Zayne.

For TOR I'll be content with Satele Shan, and the Astromech Droid.

EnigmaticOne said:
Wait, I thought the figure we got was Mandalore the Indomitable, not Mandalore the Ultimate.
Click to expand...

You are correct - that is the Mandalore killed by Ulic Qel-Droma.

So then he shouldn't be included. Come to think of it, I always keep Mandalore with my Mandalorians. I never put him near Kun nor Qel-Droma.

EnigmaticOne said:
I never put him near Kun nor Qel-Droma.
Click to expand...

My bad, I got my Mandalore's mixed up. They all look alike anyways

My Mandalore hangs out with my Mandalorians as well. Kun and Qel-Droma hang out with my Sith (who by the way are really waiting for Darth Sion to show up). My Jedi are waiting on Satele and Zayne

Ahhhh. I need to build my Jedi, and modern Sith.

I will never understand why Jarael and Rohlan came before Zayne..

Anyone see the "Warlordians" at BBTS ? They're some kind of bootleg, I guess thats what to call it, of the KOTOR Mando's in Neo-Crusader armor. I'm tempted to order one to paint up like Canderous.

Vatta said:
Anyone see the "Warlordians" at BBTS ? They're some kind of bootleg, I guess thats what to call it, of the KOTOR Mando's in Neo-Crusader armor. I'm tempted to order one to paint up like Canderous.

WTF???
Where the hell is that coming from?

Vatta said:
Anyone see the "Warlordians" at BBTS ? They're some kind of bootleg, I guess thats what to call it, of the KOTOR Mando's in Neo-Crusader armor. I'm tempted to order one to paint up like Canderous.

That's pretty much a Mandalorian Neo Crusader in all but name. Gotta check these out a little more and see if the scale of these figures is compatible with SW basic figures.

Vatta said:
Anyone see the "Warlordians" at BBTS ? They're some kind of bootleg, I guess thats what to call it, of the KOTOR Mando's in Neo-Crusader armor. I'm tempted to order one to paint up like Canderous.
Click to expand...

Don't recall where but I have seen pics of these before. Still can't decide whether they look decent enough or not, but this is probably as close to a genuine KotOR Mando as we'd ever get. Shame.

If anyone does get any of these it'd be great if they could put up some pics with real Star Wars figures for a comparison.

I haven't bought one (yet). But I typed 'Toys de Force' and their blog came up.
Here's the only comparison photo I've found, 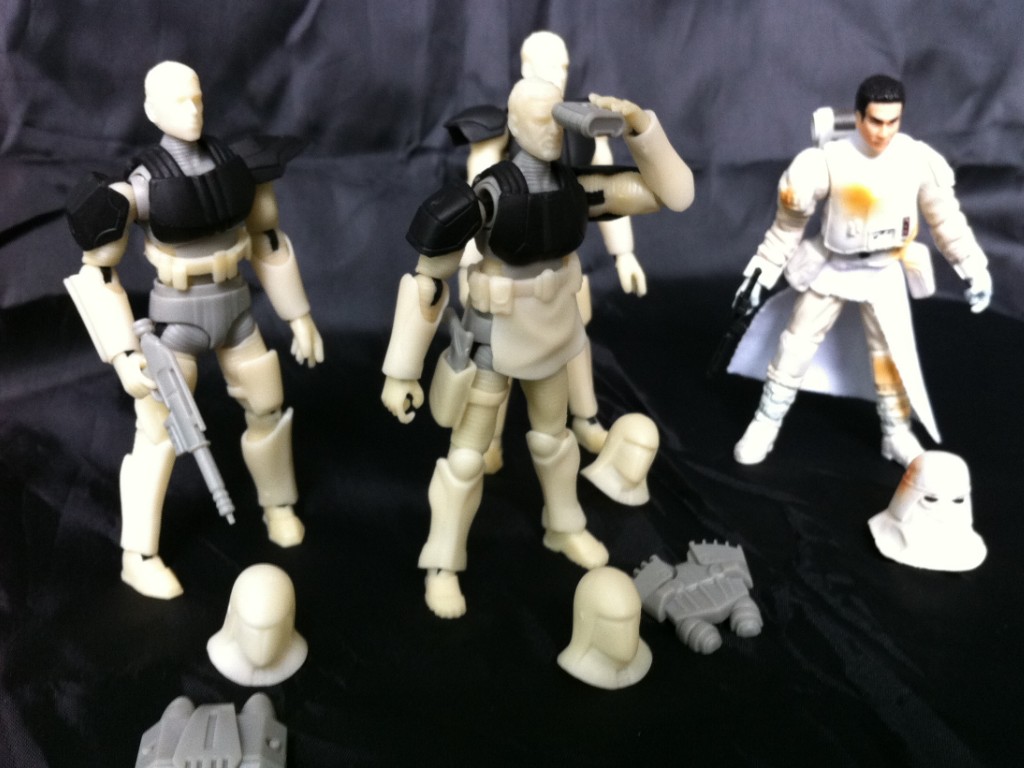 I think the helmet from the NeoCrusader or 'Warlordian' would make it a bit taller. 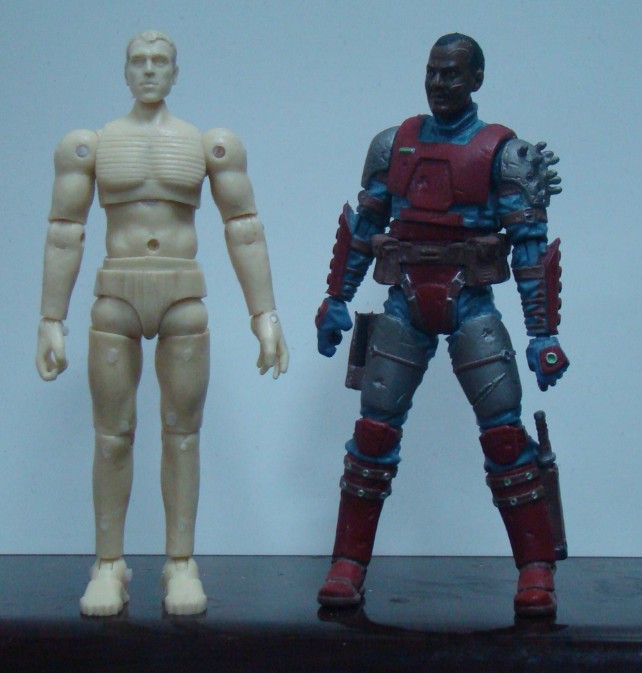 Thanks for finding thier site. That seals the deal for me, I put in a order for one of each.

Also if you want a more in-depth look at the "Warlordarians," SithLord229 did a nice review of them a while back.

Curious
Since they are a company selling these and people are claiming they are basically Mandalorians. Could Hasbro sue their A** for making these?

But, I doubt hasbro would ever produce 'em. The guy behind the fig/blog is definitely a Star Wars fan.

The blogger guy is definitely a hardcore Star Wars fan, look at what is on display behind him..
The figures themselves look interesting but I will be passing on them

Well, those guys could definitely be sued, but what's curious (to me) is they're on preorder on BBTS yet it says they ship December 2012. I'm not gonna order one, don't want to risk getting ripped off, at least until other people confirm they've received theirs. But those do look really cool. Just interesting to think about what would happen if Hasbro caught wind of it. The maker, BBTS, and their uncle's stepson would probably be sued to no end.

Seriously though, tempted to order one of those but too paranoid of being ripped off.

I'll tell you guys about it . But, I got another item on pre-order that was slated to be out in the 4th Quarter of 2012. Although it was release years ago in Japan, and most people got it in the U.S. already. It's still set as a pre-order. So maybe BBTS is a bit slow. But it's been years since I bought anything from there.

BBTS is good people. I've bought the bulk of my Star Wars, GIJoe and Halo collections from them over the past five years or six years. Never had any problems with them, although on some popular items they can be expensive. Always good no matter what to shop around for the best price. Also they don't charge you for a pre-order until it is in stock and ready to ship. As for the sueing that would not be up to Hasbro. They're just a third party that just makes the toys they don't own Star Wars or the likenesses or anything like that. Sueing would be up to Disney/LFL and maybe even Bioware in this case.

EnigmaticOne said:
I'll tell you guys about it . But, I got another item on pre-order that was slated to be out in the 4th Quarter of 2012. Although it was release years ago in Japan, and most people got it in the U.S. already. It's still set as a pre-order. So maybe BBTS is a bit slow. But it's been years since I bought anything from there.
Click to expand...

Both of my pre-orders are now slated for 1st quarter of 2013. Guess, things are moving slow. I'll just be patient, anything is better than BT.

So was anything TOR announced at toyfair?

jawajake said:
So was anything TOR announced at toyfair?
Click to expand...

Krayt said:
The announcement was that the TOR figures that were slated to come are not coming now
Click to expand...

Oh no I hope not! Did they actually specifically say that?

jawajake said:
Oh no I hope not! Did they actually specifically say that?
Click to expand...

Yes, sadly they did, in a QA done by JediTempleArchives.

Question: The last time JTA had a question session with you (Hasbro), you said that more The Old Republicfigures are planned. Can you tell us which ones?
Click to expand...

ANSWER: No more figures are planned from The Old Republic.
Click to expand...

Found it. This is terrible news.:'(

I really don't get it...
They have been telling us for how long these coming? Now, nope not coming

Looks like they just lost me as a customer!
Honestly I wasn't that interested in TOR figures aside from Shan and the Droid.

But for them to outright say no more figures are planned seems to take a no more EU stance.
So as long as they don't have anything new planned, I don't plan on buying anything from them!

I will get the new Mara, maybe the two Jedi if they are upgrades. After that, I might be done with Hasbro. They definitely have an anti EU stance right now and that is just so dumb.... You have to think that one of the cancelled figures is Satele because her and Malgus are the two most recognizable characters to those who haven't played the game

Revanfan1 said:
You are correct - that is the Mandalore killed by Ulic Qel-Droma.
Click to expand...

Mandalore the Indomitable was killed by wild animals.
D

I have lost all faith in Hasbro...
Really holding out for SDCC to see what they say there but I am pretty much done with them. Shifting to Lego
D

Eh, I don't have the room or patience for Lego, but I may pick up some loose minifigures off ebay like Satele. But that's how it all starts, isn't it? lol

Funny you mention it because Satele is exactly what started it for me...
Careful, she leads to a slippery slope

I can understand Hasbro holding off on Satele, because Bastilla just came out.
And we all know that they don't like to confuse us....

But IMO she's a logical choice following Malgus, in fact I'd prefer her over him!
He's just not my cup of tea, so I passed on him.

I'd definitely would have bought his Master though.

Passed on the trooper too, but I wouldn't mind a repaint.
Also would buy a few Jedi from the comic, and cut scenes.

We also still need Zayne since he's ready to go!

Well, at least your wants have more of a chance than mine.

The last three are probably some of the more likely KOTOR/TOR figures, but the others don't stand a chance.

Not that I'd advocate this on a grand scale, but several figures could be done via kitbash.
While the more important one get an all new sculpt, at least maybe then we could get some long sought after figures.
Then again hasbro once said that sculpting a new figure is cheaper than kitbashing, so who knows?

I can also understand Hasbro's dilemma when trying to release this type of product, concerning vendor outlets.
We have to look at it from their POV, lets say they go to Target about a BP that includes a few of these characters.
Target rep asks who they are, and Hasbro says they're characters from the KotOR game.
Target rep says, you mean a game that was released ten years ago?
Hasbro= yes. Target rep says how are they relevant today? No thanks!