Kit Fisto makes an appearance in the new Clone Wars series and has popped up on the rumour lists before. From the shot above he has some clone armour on his arms so if they do release him he'll be slightly different to the past releases in appearance (besides being animated).

Would anyone else like to see an animated Kit Fisto figure?
P

Yeah he'd be cool with the clone sleeves, like those customs some have me. Why does that look like the Death Star Walls?
X

Im all for an animated Kit Fisto, especialy if he has his smile from Aotc.

No cheesy smiles for this one I hope, smiles ruin figures *cough*Luke*cough*

Gonna have to disagree there, Kit's design is kind of goofy to me anyway (in a good way) and putting it in the animated style with a goofy grin to boot might make it worth having as a funny novelty...I definitely won't even consider it if they try to play it straight.

I like the look of Kit's animated form - I think this scene with him and Plo Koon is the one which I'm most looking forward to seeing. Two of my favourite Jedi in Death Star-like corridors. Can't wait.

Only if they're making Animated Aayla to keep him company

(I don't care if she shows up in that series, just make a SA Aayla for once, Hasbro) I'll take one of him and Plo please!

looks a hair bit different from the movies but cool as ever.

Lo and behold, hes on the rumor list, along with Aayla while they're at it. I so hope this is true, for if it is, I'll be hyped most for this pair.
M

One of the few animated figures i'de want. Mabey even one to keep MOC.
D

Depending on how it looks I may buy him a few other Jedi. Aayla Secura comes to mind as well. I have always liked Kit for some reason.
J

why not oppo ranssis the rest of the jedi in animated or relese some generic jedi too.
A

i've always liked him. bet he'll look the same as the nonanimated version though

kit is awesome yes but what wave will he be in?

That has GOT to be made... I'll buy it, even if it's the only animated figure I buy.

I'd buy this one on site. I'd also love to see the Mon Cal jedi.

Somebody call me? lol

I would really love an animated Kit Fisto as well. It would even be better if his head-dreds were made from the very soft rubber so you can do something with them while putting him in a Starfighter (his own from last year maybe?)

Is he in the movie? Where is he from mate? Cheers

The Mon Cal is not in the movie, but he is in this pic: 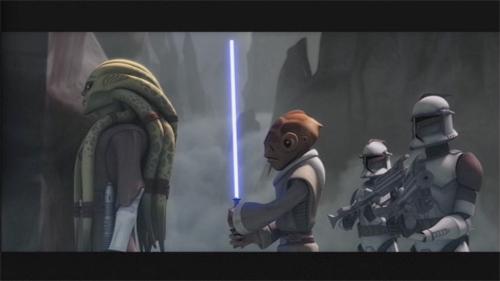 About his Padawan, his is Nahdar Vebb.

He appears in an episode called "The Lair of General Grevious". I found out that he dies in that exact episode.

About Kit Fisto, I also some him on the rumour and I also hope they make him. It would suprise me if they didn't even though he appears in the series.
J

I'll be picking Kit up when he's released. His animated design looks great and should translate to an excellent figure.
A

will someone please give jedi both elbow and knee joints!! at the same time!!

I'd easily buy a multipack of Kit, his Padawan and the two clones.

I would be suprised if they did not make Kit and all the other jedi showing up in the TV series. And I hope there will be many more to show up (Aayla, Ki-Ada-Mundi, Stass Ali, Saesee Tiin, Kolar, etc...) One I really wish they'd bring in is Quinlan Vos. But I wish they wouldn't have changed up their costumes again. Just because its a new show doesn't mean the jedi can't wear the same thing they usually wear. Now Plo Koon's sleevless robe is an exception. But its really very similar to what Ki wears already, just you never see the hood up. The clone armor on all the jedi is a little overkill for me. Obi-wan was ok because we've seen it before in multiple forms from the earlier CW cartoon. But just having the jedi in animated looks is enough to sell them, they don't have to create all new costumes for everyone of them. I think Anakin's is the worst of all.

But back on subject: Kit is welcomed in any format.
N

I would gladly buy an animated Clone Wars Fisto.

Kit Fisto has always been my favorite the the supporting Jedi Characters since he first appeared in AOTC. He was one of the first AOTC figures I picked up and I'll pick him up in a heartbeat if he appears in animated form.


VintijDroidGutzz said:
Hmm.. what's happening to me..
Click to expand...

Spoiler Below!!! Kind of?

Kit Fisto will be voiced by Seth Green in the upcoming CW television series.

VintijDroidGutzz said:
Hmm.. what's happening to me..
Click to expand...

I started off not wanting any of these. I changed my mind with R2, then Threepio, then the black R3.
Kit Fisto is one of the coolest Jedi - & one of my faves, so if he turns out nice, well.. we'll see.


Grak said:
Spoiler Below!!! Kind of?

Kit Fisto will be voiced by Seth Green in the upcoming CW television series.
Click to expand...

He's a pretty good voice actor. I can't see him doing Kit either, but he might surprise us.
T

Now THIS will be interesting