Most of the series have been kinda fun, short easy reads, "tales from wild space" kind of stuff. I was pleasantly surprised to see a Jaxxon centralized story in the latest issue. It makes sense for the Adventure series. Also loved how they have him use his "kick", almost exactly as it was in the vintage Marvel run.. nice touch.

Still would love to see this character brought to either the big screen (Han Solo movie) or TV series just as a side/background character. I'd love to see a dirty, mean, beat up, bullet hole in one of his ears.. scruffy looking Jaxxon. It could work.
B

They resurrected Amaiza Foxtrain for that Star Wars Adventures Annual too. She was another character from the same Seven Samurai/Magnificent Seven arc of the original Marvel series that Jaxxon came from.
A

Holy Crap! I love Jaxxon and Amaiza, thank you for posting this. I gotta pick this book up.
B

adrian845 said:
Holy Crap! I love Jaxxon and Amaiza, thank you for posting this. I gotta pick this book up.
Click to expand...

Looks like I'll be grabbing a copy--I love Jaxxon and Amaiza!

Same here. Going to grab one. Thanks for the heads-up.

BillMulder said:
They resurrected Amaiza Foxtrain for that Star Wars Adventures Annual too. She was another character from the same Seven Samurai/Magnificent Seven arc of the original Marvel series that Jaxxon came from.
Click to expand...

You know.. I was so excited for Jaxxon that I completely forgot about Amazia!
A 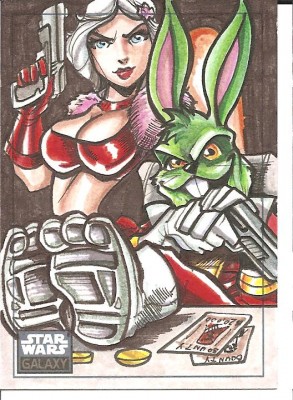 I've been a fan of Jaxxon ever since I was a little kid & read Marvel Star Wars #8 back in the late '70's. The character was both funny & vicious; like Buggs Bunny on steroids - LOL. I feel that the character was created as a kind of joke, but ended up having a "cult" following amongst certain SW fans - LOL.

I have wanted an action figure of this green rabbit ever since the late '70's, and have continuously been disappointed that one has never been released. When the comic-book figure two-packs came out in the 200X's, that would have been the perfect opportunity for Hasbro to release a Jaxxon/Amaiza two-pack - and include either Marvel Star Wars #8 or #16 (the two characters were featured in both comics, as well as several others).

Here's hoping that at the least, a Jaxxon figure is released at some point, maybe as a fan-favorite. I have no doubt the figure would sell well. Obviously Jaxxon fans would buy this. However, even collectors who aren't that familiar with the character may want the figure, if only because of it's unique/bizarre appearance - LOL.
Last edited: May 9, 2018
J

you'd think, the BS just did a Jaina for cripes sake, how can they not hit back to Marvel!!! I don't find him any more odd than many ROTJ characters, being derivative of animals so much. Solo has some aliens just as simple & odd.
Last edited: May 16, 2018
T

Yes, the lack of a Jaxxon figure in the modern line is a puzzler. Modern line SW figures have been coming out since 1995, which is 23 years at this point. During that time, there have been a good number of EU figures that have been released, including those in the 2-figure comic packs, some fan favorite figures, etc. At the least, this character deserves to be on an individual card - and not as a store exclusive, but in a widely released wave.

Hopefully we'll see it at some point.
D

Count me in as well for a potential Jaxxon/Foxtrain 2-pack. We need those comic figure packs back. Another want is Arrogantus….he's kind of got that Flash Gordon-ish costume look to me.
Last edited: Jul 31, 2018

I always assumed we'd get the odd characters like Jaxxon as convention exclusives or something. Tonnika sisters also. (I know there's a block on them). I figured we'd get Jaxxon showing up in some new media eventually.

Bring on the figures I say!

Deak_Starkiller said:
Count me in as well for a potential Jaxxon/Foxtrain 2-pack. We need those comic figure packs back. Another want is Arrogantus….he's kind of got that Flash Gordon-ish costume look to me.
Click to expand...

Yes, yes and yes. This needs to happen.

They could do 2 Packs or a big multi-pack of all the characters in that arc and I would be chomping at the bit to pick it up. Loved it as a kid and still love it now.

I suppose it will depend upon how well Aphra does at retail. If she does well, we'll likely see more Disney EU characters than our old comrades. On the flip-side, if she doesn't do that well, we might actually get our chance at some of those charters.
You must log in or register to reply here.
Share:
Facebook Twitter Pinterest Email Link
Top