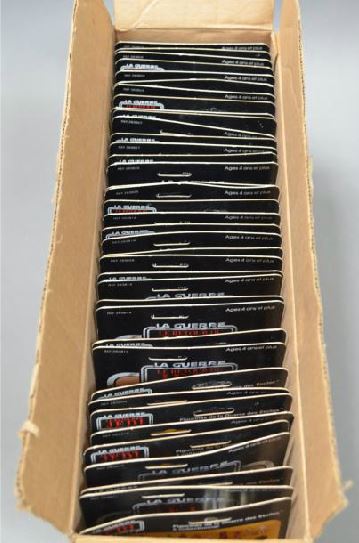 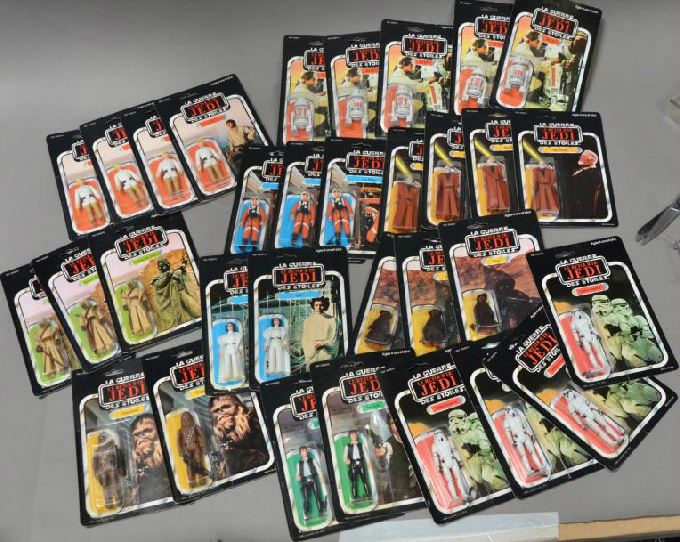 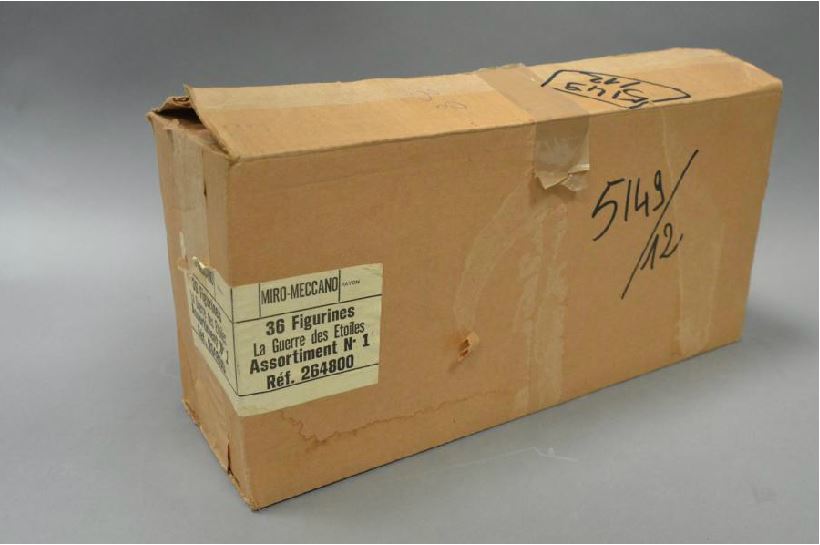 Saw this one on FB. It's such an amazing find! Rarity of some of these pieces suddenly dropped by 100% - 400%! But then again, there are 50 collectors in line to get them.

Location
I come from a land DownUnder!!

I'll take one of each please

I know nothing about the market for French MOCs so how does a find like this affect the number of known examples of French ROTJ MOCs?
Last edited: Jul 11, 2014

According to the linked article, this find represents all the known examples of leia on that cardback.
T

Were these punched at the factory?

Wow that is an amazing find , unfortunately I can't read French ! The small paragraph in English says they were had at a responsible price! But I can't find the link since it's in French does anyone know what the box sold for ?
F

First I would apologyse for my english but I want to bring you some answers :

- yes I understand it is quite a bit difficult to count all the figures just in reference with the photographies ! In fact, in this auction in Drouot, there were 3 lots : 2 with sample of 2x5 figures and the one with the full box. The photo with all the cards do not show all the stormtroopers and the sticker on the box is not representative of the total... Indeed, it's difficult to follow but here is the complete listing number of each blister, in french with short translation :


Hope you find this article interesting. Please : do not hesitate to go to Toyzmag and let me a little Merci/Thank You : this webmagazine need it and I need it to make more article like this !! ;-)


I am a collector and like my other friends I am quite a bit upset by this auction because I feel stupid to have missed it... And to see the actual price fixed by the shop who by the entire set make me crazy... It is still on the french ebay...

On the other hand : I am very glad to see (and to present to the world ! LOL) -at last- the famous Leia meccano french ROTJ 45back which is a killer !
The box is also a real discovery, even in France !

Thank you and have a nice weekend

Wow. So amazing to see this.

Here is a pic of the publicité Antoine (Fansolo) mentions of the Leia moc previously only seen in advert form on the back of a French (Pif Poche) publication, and the ad from French Pif Gadget comic magazine (1983).

does anyone know where these were found?

I'm surprised a case had such a strange breakdown of main characters to ...um....lesser desired figures. Why so few Hans but so many R5-D4s? You would think Hans would sell better than R5-D4, Jawas and Tusken Raiders
C

Awesome find! Just think of all the others waiting to be discovered.

There are still great Golden Age comic book collections turning up today and those were produced in the late 1930s and 1940s.
J

This box was probably just tucked away on the top shelf in some back storage room of some old shop and had stuff piled in front of it since the 80's. At least that's how I'm imagining it. Amazing discovery. There are still 100's of finds just like this just waiting to be found. It keeps the dreams alive as years continue to go by and amazing finds continue to surface.

Wow, what an amazing find!!! It's great to hear that the are still fun treasures to be "unearthed".

No Yellow Bubbles , Guys?? Maybe it is light that causes this??Assuming these were never opened at all??
D

I would say you are right. France can be super hot in the summer and I dont know if these had aircondition?


andrewb said:
No Yellow Bubbles , Guys?? Maybe it is light that causes this??Assuming these were never opened at all??
Click to expand...

andrewb said:
No Yellow Bubbles , Guys?? Maybe it is light that causes this??Assuming these were never opened at all??
Click to expand...

The lack of light sure must have helped, but the mix of compounds of the bubbles is probably the main reason for them to still be clear.

andrewb said:
No Yellow Bubbles , Guys?? Maybe it is light that causes this??Assuming these were never opened at all??
Click to expand...

Nope, totally debunked many years ago when a vintage sealed case was opened which contained figures with clear bubbles and others with yellow bubbles. Yes UV light is bad and can be either/both a catalyst and an accelerant but primarily it's the composition of particular plastics that's the predominant cause.
F

I have seen 11 of this cards. Only the Tusken Raider has a minor yellow bubble. All the others are totally clean and perfect... Except the price of course !
;-)

Finds like these always amaze me. How great would it be to stumble on something like this? One can dream.

I suspect air circulation has something to do with it too. Maybe it's my imagination, but I think bubbles can yellow faster once they are sealed in afa cases (especially if they are then stored in polybags and on top of each other in boxes so the air really can't move.) Roughly 10 years ago, someone was selling potf bens out of a shipping case. They were all very high grade and had crystal clear bubbles. I bought 4 or 5 of them and had them afa graded. They have been sitting in dark boxes in a closet ever since, and they have all started to turn yellow (though still only slightly.) Also, wasn't someone selling potf ewoks of some kind here in the classifieds maybe 6 months ago fresh out of a case, also all with crystal clear bubbles? Something about those cases keeps those bubbles clear, even potf bubbles.
A

OK Guys - We all better start collecting Meccano MOC'S for the best shot at having clear bubbles for a while...B)

I really never had any desire for meccanos......until now. I can't stop looking at this thread!
B

Gonk said:
I suspect air circulation has something to do with it too. Maybe it's my imagination, but I think bubbles can yellow faster once they are sealed in afa cases (especially if they are then stored in polybags and on top of each other in boxes so the air really can't move.)
Click to expand...

I've seen this too - could be a reaction between the plastics, with no air circulation.

As others have said, it's light, humidity, composition etc. - but reactions between plastics is also a cause, imo. I noticed this with the old star cases, it seemed stuff would go yellow very quickly when left in those.

But the ultimate cause, as Dax has mentioned, is the plastic used. Some are just more resilient than others.

This already impressive find would have been even more amazing, stunning, with any Vaders in it :weeabooface: - considering the popularity of such figure and focus collectors out there always in the lookout for a Meccano card in their collection.

The figures were auctionned in THREE separate lots, starting with 2 lots composed of 5 different figures each, and a third one with the 38 remaining plus the shipping box, totalling 48 figures.

It was really a clever move from the seller, once the 5-figures lots were auctionned, it instantly set a base to all competitors in the room... still, the winner was lucky enough to win everything at around $150 each figure; yes, you read correctly :hmm:

Over the whole year 1983, Meccano released mostly only SW and ESB toys under the new ROTJ branding.

These SW and ESB assortments were first marketed on 45-backs, then updated on 65-back cards when the ROTJ assortements became available.

Since the Meccano 45-back Vaders do exist, and since there was only one Starwars rerelease assortement on ROTJ cards, we strongly suspect the 48 figures don't match the original content, and it was probably mixed-up a long time ago (the SW assortment part is confirmed on the box).

From the auction listing, it looks like the original owner knew about starwars collectibles terminology and rarity, but not enough to let them go so 'cheap', but it doesn't need to be an expert to know that Vader has always been among the most popular characters, so maybe he just got a few assortments, sold the vaders, and kept 1 full box as an egg nest for the future

Thanks for that explanation Stephane, I guess my hunt continues!

I see you posted this long ago but I am starting to sell a collection for my son. I have a leia in french....41 back, I think. How would I value it? thanks... e address is pebblesandme@yahoo.com. Any info appreciated.
M

lchi3381 said:
I see you posted this long ago but I am starting to sell a collection for my son. I have a leia in french....41 back, I think. How would I value it? thanks... e address is pebblesandme@yahoo.com. Any info appreciated.
Click to expand...

Include quality photos as well to get a good idea of value. Condition is everything.

lchi3381 said:
I see you posted this long ago but I am starting to sell a collection for my son. I have a leia in french....41 back, I think. How would I value it? thanks... e address is pebblesandme@yahoo.com. Any info appreciated.
Click to expand...

If your Leia has a 41 back card and French language on it, it is likely to be a Kenner Canada version. There is no French Meccano 41 back figure.
You must log in or register to reply here.
Share:
Facebook Twitter Pinterest Email Link
Top