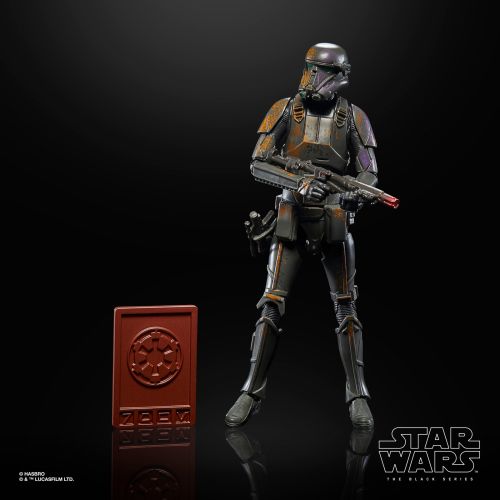 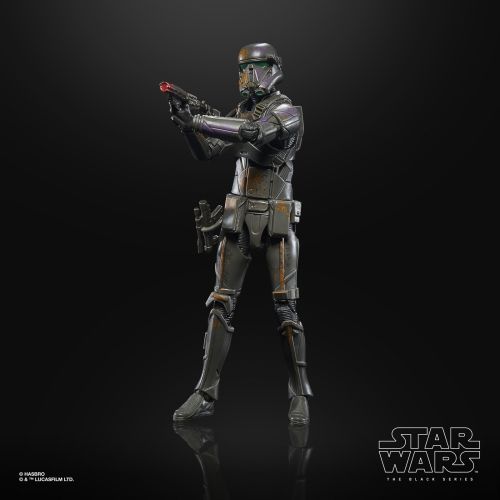 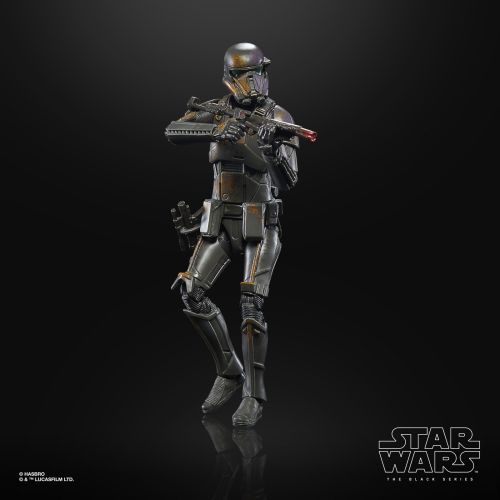 Great looking figure! Looks good on the card too

I was surprised that this one was the easiest of the five to get. No broken links or immediately sold out errors. Was able to get two right at 4pm EST.

everyone shooting for the mando's first
J

Etain said:
I was surprised that this one was the easiest of the five to get. No broken links or immediately sold out errors. Was able to get two right at 4pm EST.

When I saw Rogue One I really liked these guys. I am surprised they were brought back for the Mandolarian series. This is going to remain carded. The card art looks wicked in my mind.
M

Very happy to have grabbed this one. Thanks for the links and pics!

To each their own I guess. Looks to me like the Death Trooper dipped his rifle in Maker’s Mark wax.

DeWonnaWonga said:
To each their own I guess. Looks to me like the Death Trooper dipped his rifle in Maker’s Mark wax.
Click to expand...

i preordered 2 because i missed the original release of the Death Trooper, and i think that they will look great next to Moff Gideon
J

in my experience, ive always gotten them in boxes that are almost an exact fit, little layer of bubble or the big air packs. im a prime member, i have NO clue if that makes a difference, but ive heard other collectors say that they only get them in bubble mailers, so

Amazon is hit or miss at best. A few weeks ago, I received an ESB Chewbacca from them which had been stuffed into a box which was too small for it. The cardback was completely bent. I complained and returned that Chewie for a replacement.

Since then, Amazon has been sending me figures in larger boxes with some of those air pouches tossed in. The figures are not secured in the box. They have room to bounce around. I received the Hoth Rebel Soldier, the Snowtrooper, and Han in Carbonite this way. The cardbacks were not terrible, but they certainly were not mint. I could live with them.

However, today Amazon sent me Lando Calrissian in a box which was slightly too small. The cardback is not as bent as the cardback of the Chewie I received, but it was a poor decision by the packer.

I have never received a figure in an envelope from Amazon, but I hear others have.

Looks like his been left in the sun for awhile, overall a nice version of the figure. This one I don’t mind

Based on the photos, this figure could pass more for being "weathered" than "carbonized." A weathered Death Trooper, as in how he appeared in chapters 7 and 8? Sure I'll grab one. Really liked these guys in Rogue One. Outstanding character design and as figures, they were beautifully built.

Ordered one from Amazon uk
H

I picked this one up-

1- love the cardback
2- love the figure
3- have already TVC figure and plan on getting TVC carbon,, so now I'll have my own set now...
Q

Just ordered one of these. I’ve been constantly searching for this on Amazon with no luck. Then I saw a link on the first pack and was happy that it was still available

I definitely need this guy. Just been waiting for it to show up on amazon.ca

Mine just arrived from Amazon UK.Looks great on the card!

Man, so glad I pre-ordered this....... but I guess we are waiting till December LOL

I got a shipping notice for this guy this morning. I’ll have him tomorrow.

Have no doubt I'll be the last to have my orders fulfilled for this and Mando, just like Carbo Han.

TKRC13 said:
I got a shipping notice for this guy this morning. I’ll have him tomorrow.
Click to expand...

Etain said:
Have no doubt I'll be the last to have my orders fulfilled for this and Mando, just like Carbo Han.
Click to expand...

I just had all my Masters of the Universe Origins pre-orders cancelled by Amazon on Thursday due to not enough stock. My estimated dates for the Death Trooper and Mando Credits are December 13th.

I'm hoping it's not gonna be an issue, but the MotU sting is still fresh.

Mine was delivered about 45 minutes ago. Looks great!
J

TKRC13 said:
Mine was delivered about 45 minutes ago. Looks great!
Click to expand...

WHAT?! lol... I am still showing December for mine....lol

Just received an email from Amazon. Delivery date updated from 12/3 to 11/18.

Mine is supposed to arrive later this week. Here’s hoping for a mint card

Etain said:
Just received an email from Amazon. Delivery date updated from 12/3 to 11/18.
Click to expand...

I decided to pull the trigger on this guy.

Listed for a Dec. 21 delivery. But in fairness to Amazon, many of my pre-orders of the past few months have been coming in ahead of the listed delivery date.

Just got my Mandos. Honestly the only figure I had to have one to open as well.

Now just waiting for my Deathtrooper to ship.

I'm not collecting this set but they are lovely in totality! 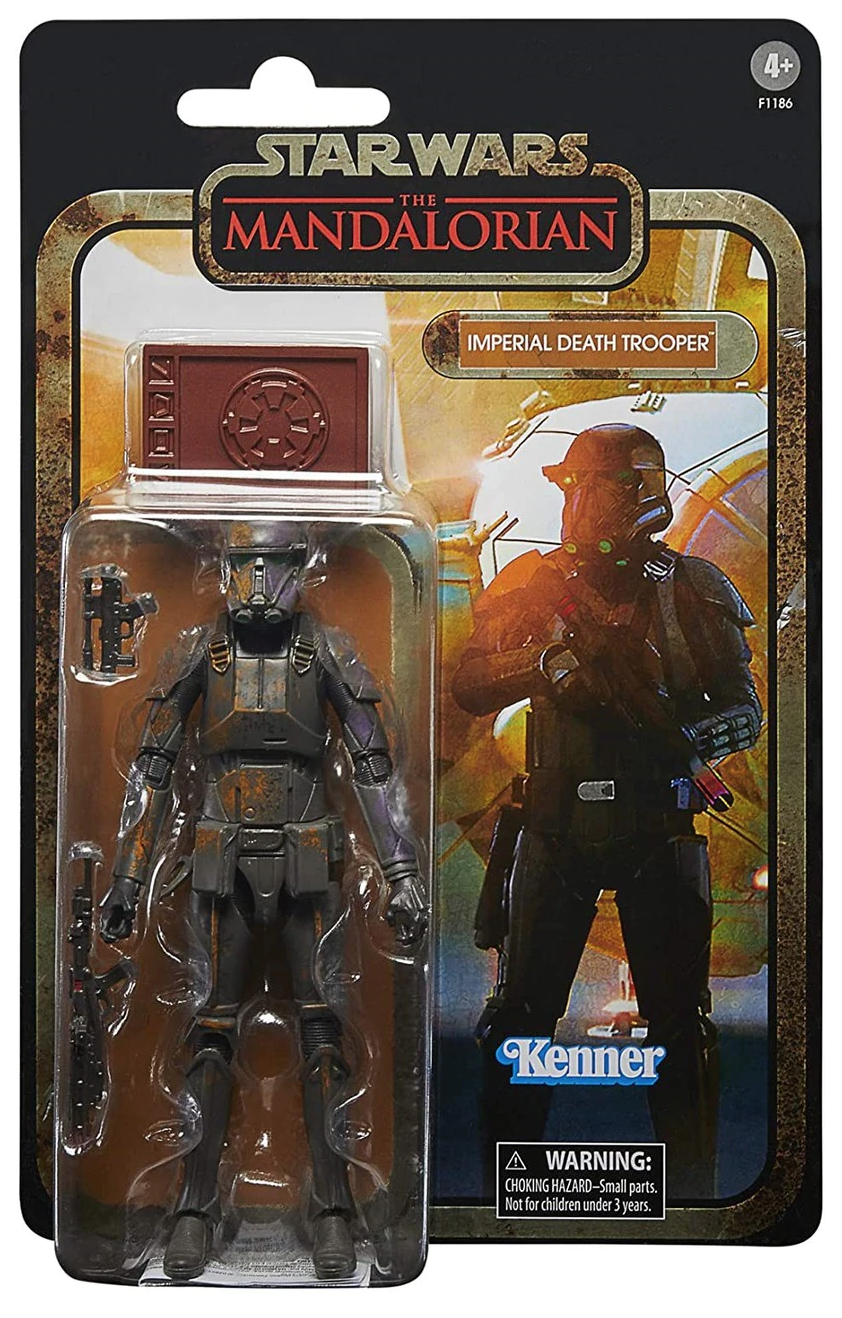 Unimpressed with this one...paint apps look like crap, one side orange one side purple, the green lenses look stupid.
Crappy cheap cardback and another repaint, $5 upcharge...not worth the money.
Hopefully CC Mando is better...

Well, my order jumped from 11/18 to being delivered today!

Looks amazing in person - like all the other ones. Just need the Mando that's arriving Wednesday to complete the set.

Anyone else hoping we get some kind of normal Deathtrooper release for Mando as well? I mean I want to have one in the shelf but I forced myself to have a mostly strict no army building outside of OT rule.

Just release him with black colored weapons instead of the grey ones and I bite.
J

Mine got moved up to Friday. The Mandolarian is still shipping Dec 3rd.

I actually just canceled my pre-order. I saw a side-by-side comparison of the original release and the CC release on Toyark and did not release just how gray it was. Just won't fit in with the two I have. Like the lived-in, weathered look for sure, but it would just stand out too much for my liking. If it was all black with the weathering I'd be all in for a few.
You must log in or register to reply here.
Share:
Facebook Twitter Pinterest Email Link
Top