Masterfett said:
Yeah it's a neat ship, and I would have bought it for $15 at Walmart if I had seen it, but $22 is still a bit high for why I want it. I heard the Nerf was removable though, or am I mistaken?
Click to expand...

I'm not sure whether I'm understanding your question. However, I'll reprint something I posted earlier on this thread - this may help:


ThallJoben said:
I don't know if this is normal or not, but here's what's going on with my Nerf launcher on this A-wing: You can put the Nerf missle in the slot, pull it back, & it does fire, but the plastic tube cannot be "pulled back" with the missle, like it shows in the pictures. Actually, I think this looks better - and, from the little I know about springs on toys, it seems like the spring is getting less strain since the tube isn't being pulled back. I don't consider this "broken" however, since the Nerf missle does fire.

I do like the fact that there are "holders" on each side of the missle tube to hold the two nerf missles. I took this out of the box & discarded the packaging (I do this with all of my vehicles that I plan on opening, since packaging takes up too much room). So, I can easily display this without worrying about losing the missles.
Click to expand...

found 3 of the A-wing for 7 bucks this morning at Walmart. I picked up a second one for Sabine to fly. Anyone want the Hera I already have her from the first A-wing I bought.
S

Found 2 at Walmart for $7. Only bought one though now I'm sort of wishing I had picked up the second. May go back and grab it if its still there tomorrow.

For that price, I would buy them all. It's a fun little ship.

jedimasterc said:
found 3 of the A-wing for 7 bucks this morning at Walmart. I picked up a second one for Sabine to fly. Anyone want the Hera I already have her from the first A-wing I bought.
Click to expand...

I'll buy it if you still have her. I've been looking for one on clearance with no luck.
J

PM on the way.

I'd pay $10 + shipping for this if anyone comes across one.

ThallJoben said:
My Wal-mart has no trace of these Rebels A-wings now; I guess I got the last one about a week ago. To those of us who got this for either $15 or $7, we should consider ourselves lucky. Again, this a great ship & it's unlikely it'll be re-issued - due to it being a Rebels (and non-movie) vehicle.
Click to expand...

The A-wing is featured in The Last Jedi, possibly as Poe's vehicle, so I would imagine we'll get another release. A repaint and/or variant there of. Would love a blue Macquarrie concept, but that would be close too what fan's actually want.
L

Nerdherfer said:
The A-wing is featured in The Last Jedi, possibly as Poe's vehicle, so I would imagine we'll get another release. A repaint and/or variant there of. Would love a blue Macquarrie concept, but that would be close too what fan's actually want.
Click to expand...

I would much, MUCH prefer a retool of the PotF/ PotF II/ SAGA/ Legacy A-Wing. This one I probably wouldn't even buy if it was marked down for $7!

Lord_Hurin said:
I would much, MUCH prefer a retool of the PotF/ PotF II/ SAGA/ Legacy A-Wing. This one I probably wouldn't even buy if it was marked down for $7!
Click to expand...

I do like the mould of the new one sans the nerf garbage and I hate smoked glass if you can't see the figure, so I'm glad this one is not too dark. But if they do release this new mould with the movie paint, or a MacQuarrie deco, please pick up 3 of each for $7, I will buy them off you for $30 a peice, plus shipping and will still be in front for what they clear for here in Australia

I pulled the springs out of the nerf feature like our man Nighthawk has done in the TIE Striker, took the smaller spring and placed it the opposite end in the opposite side channel on the inside of the cavity to hold the tube back inside it. You could put anything in there to fill it to look like a missile or sensor. I actually have a bullet shaped led tea light. I'm really happy with it and all I have left over is the large spring.

Lol so much for that image hosting service.

Here was the intended comparison to the German jet fighter above. I actually like this vehicle with that minor adjustment. It has a stubby beefier look to it. I really wanted to remove the entire Nerf assembly but it was too hard so I converted it to have retractable cannons. Got the idea from the Phantom. 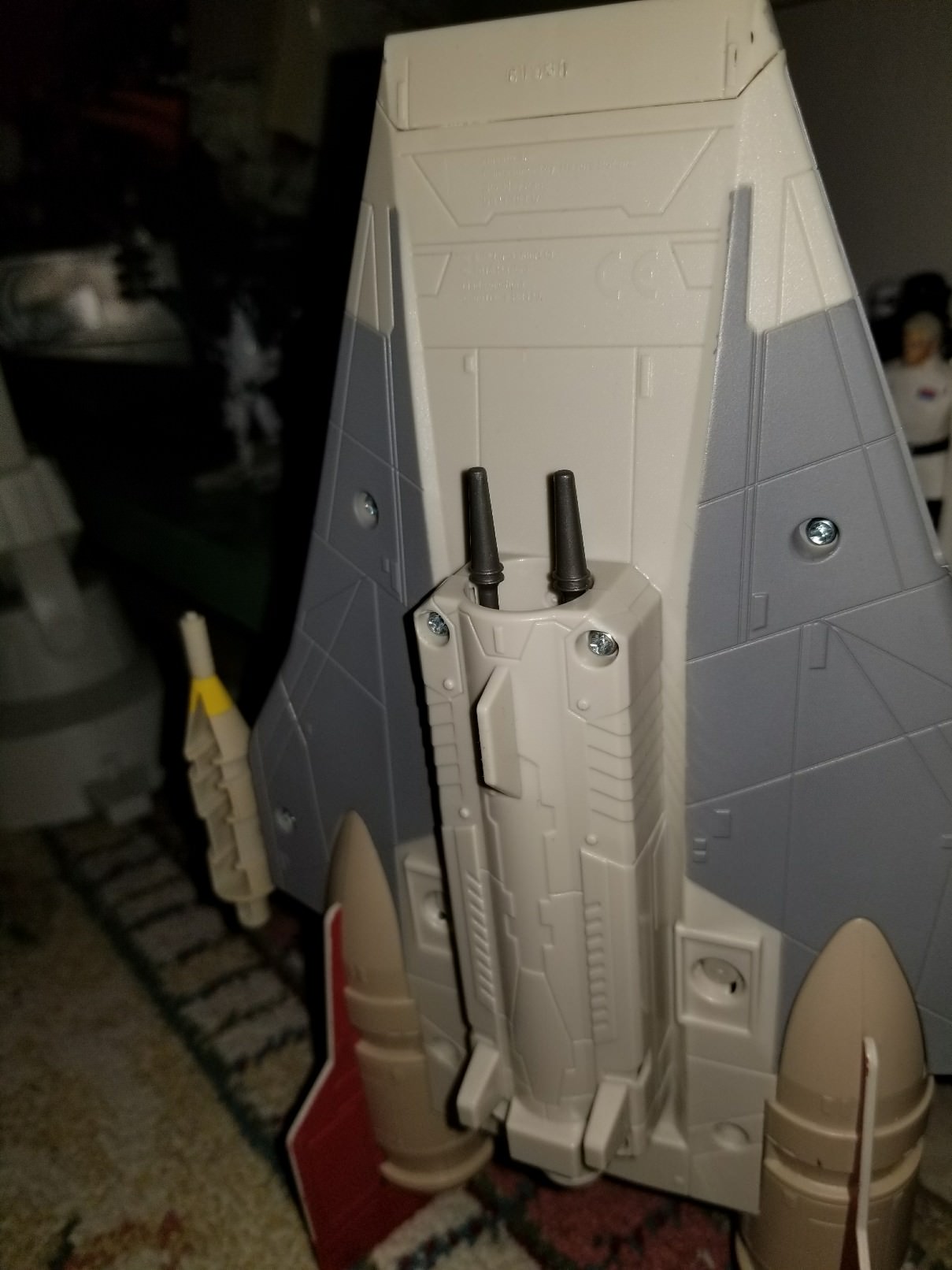 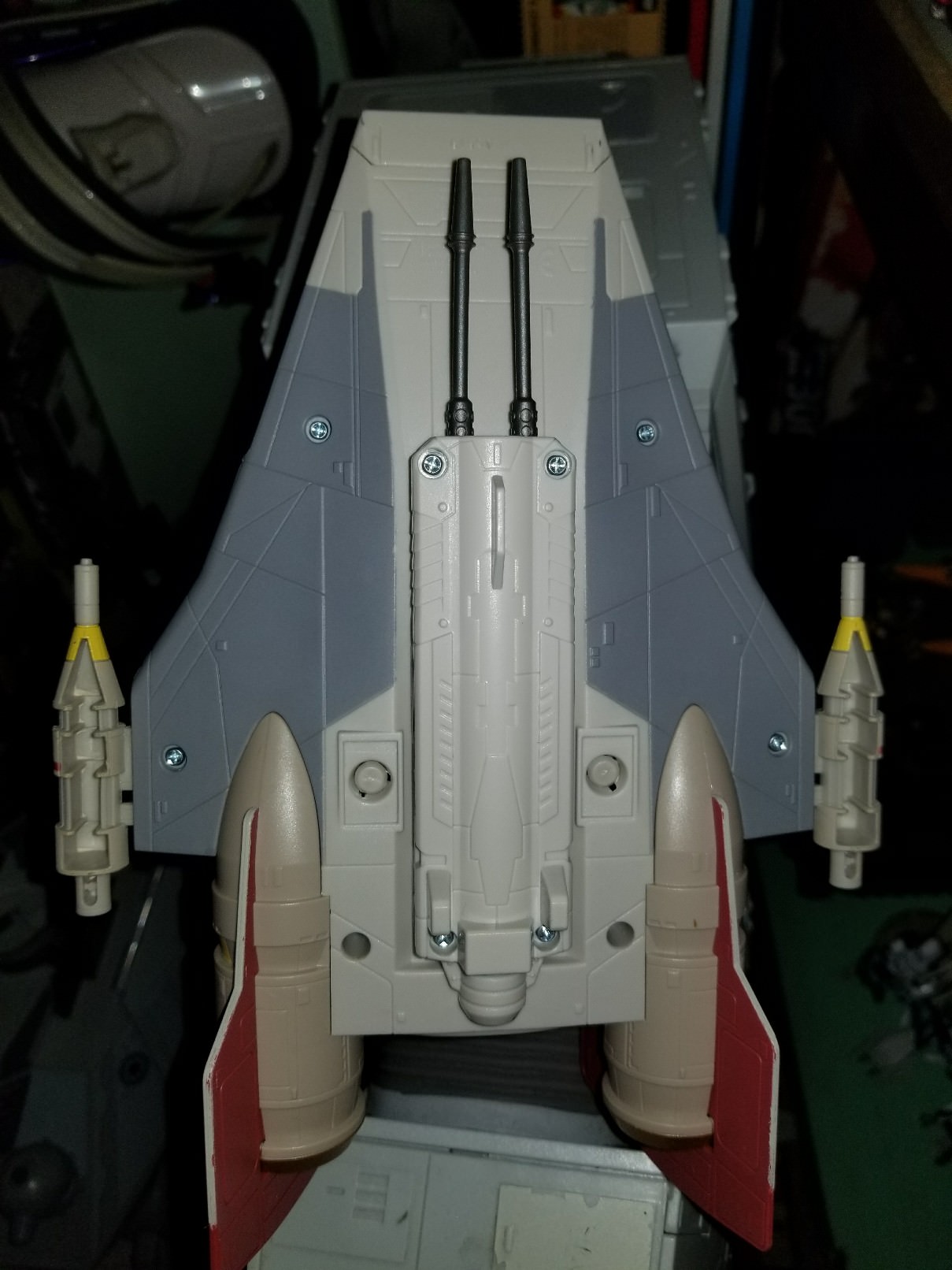 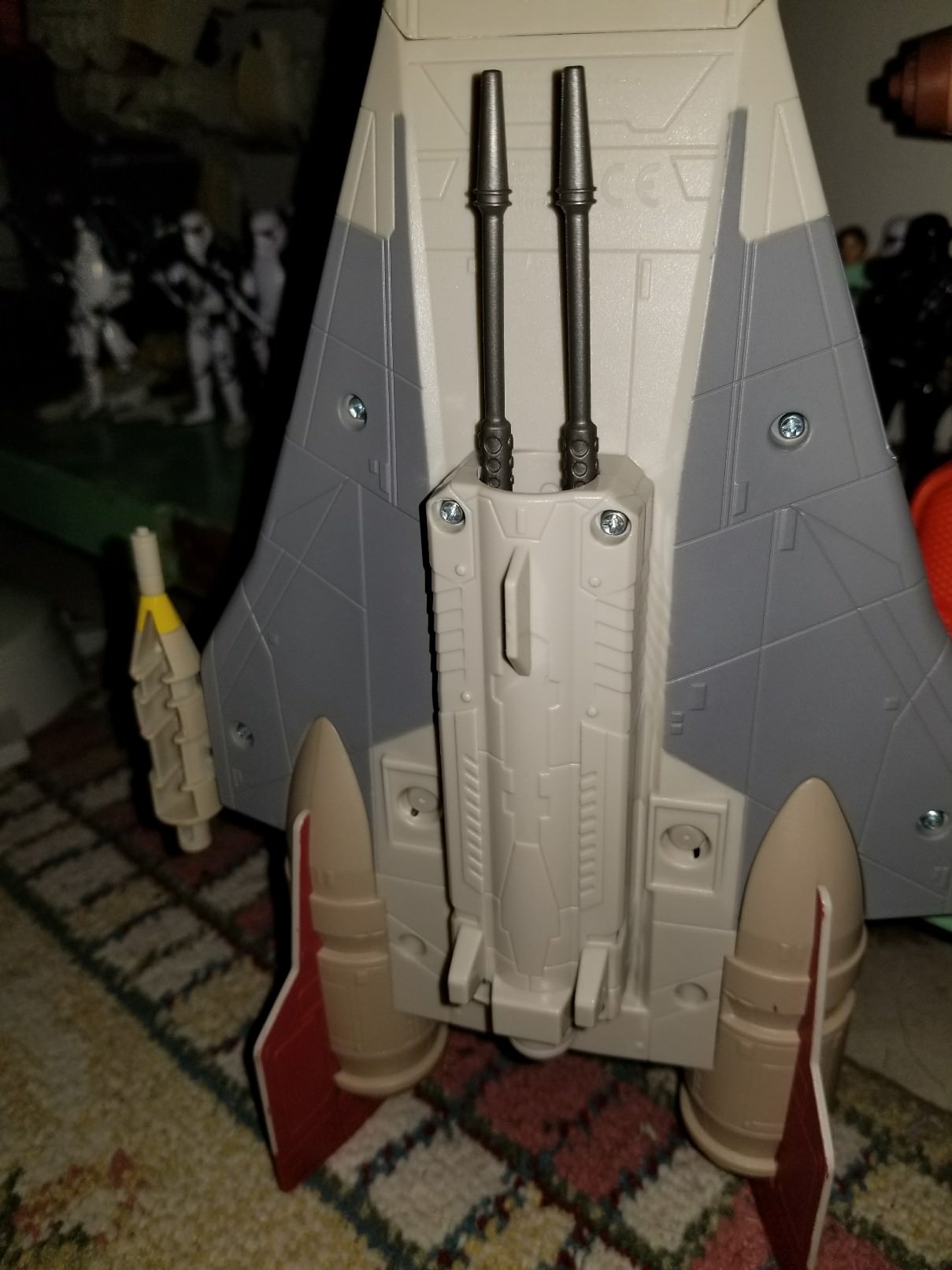 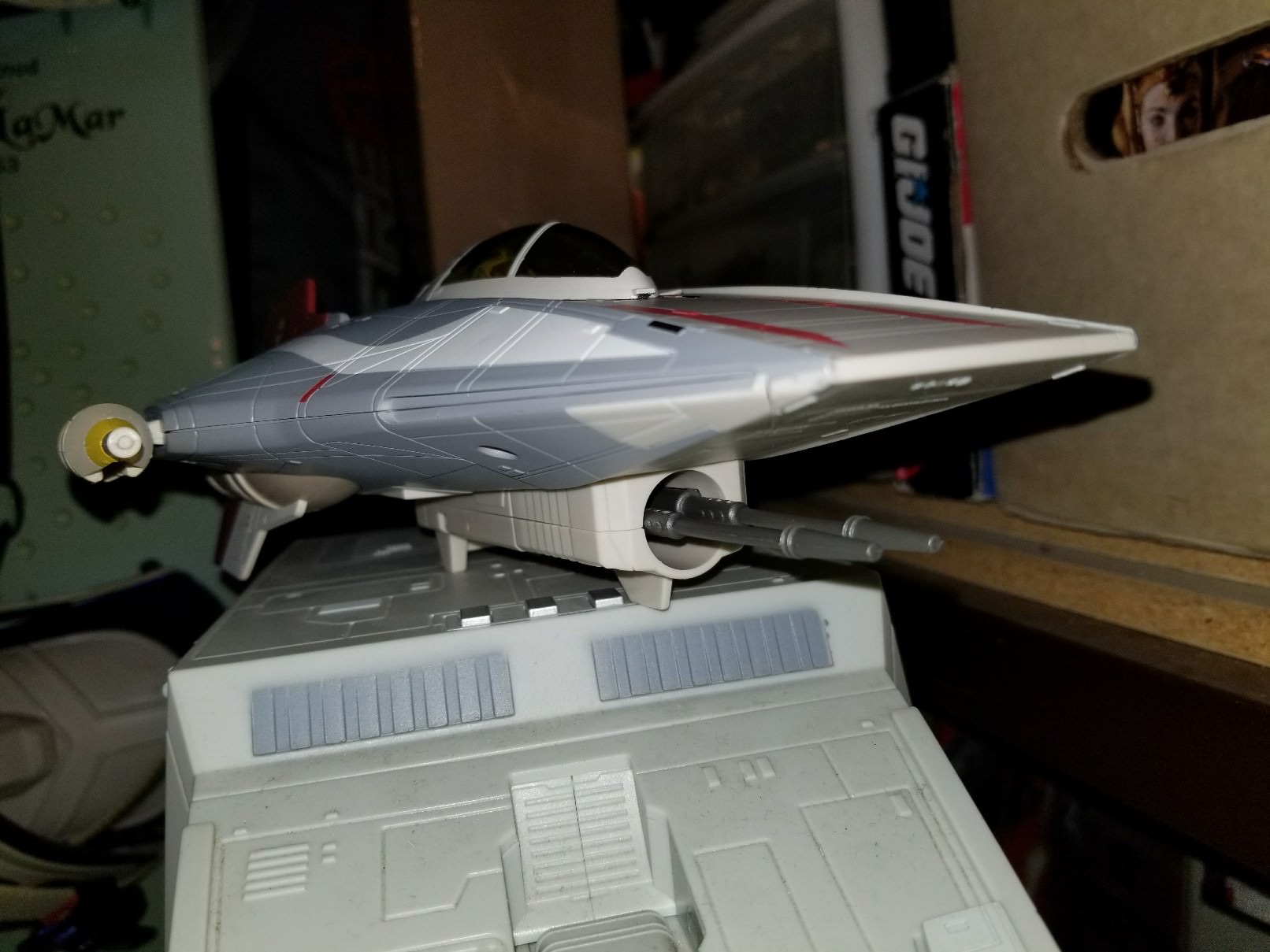 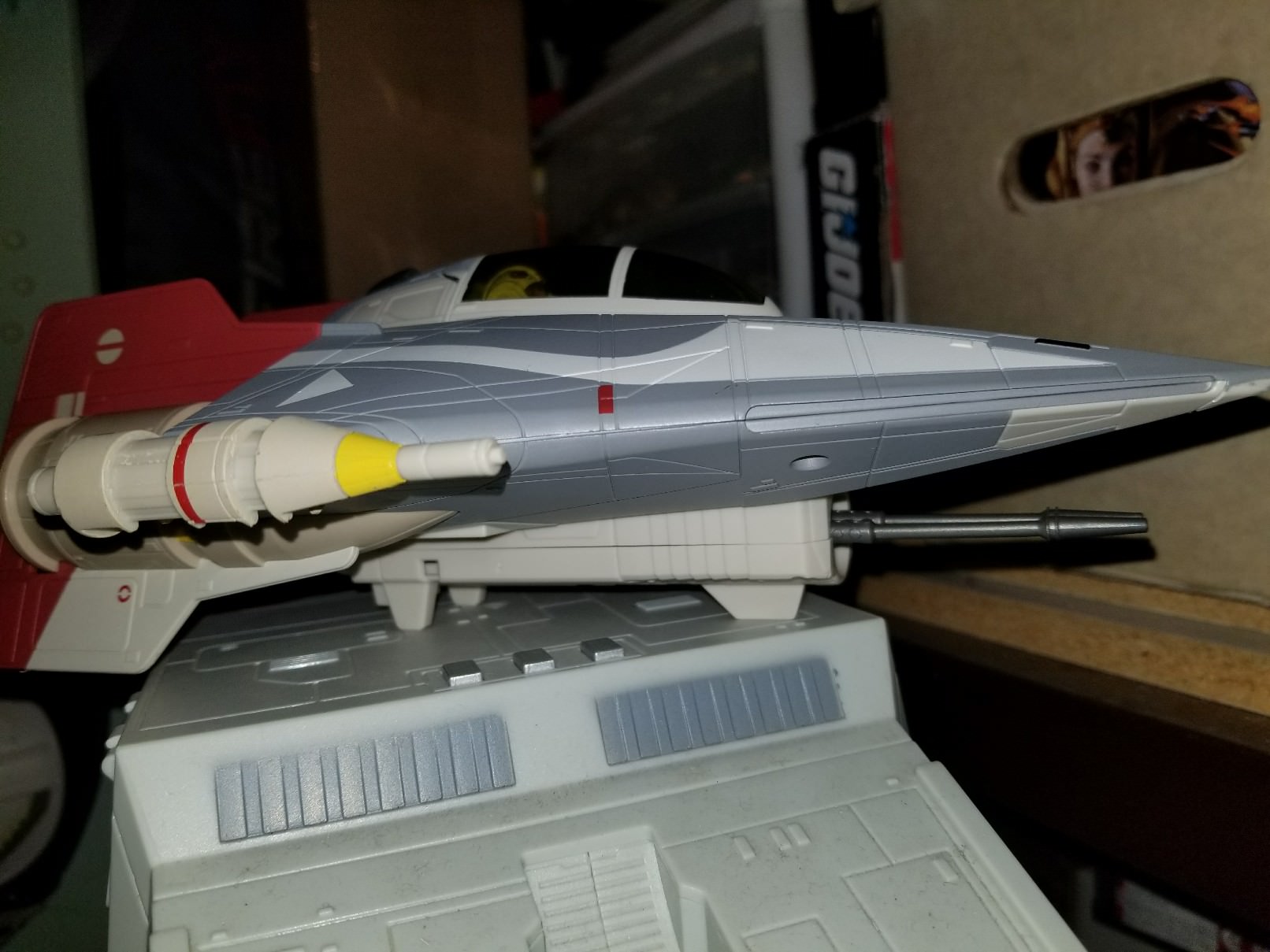 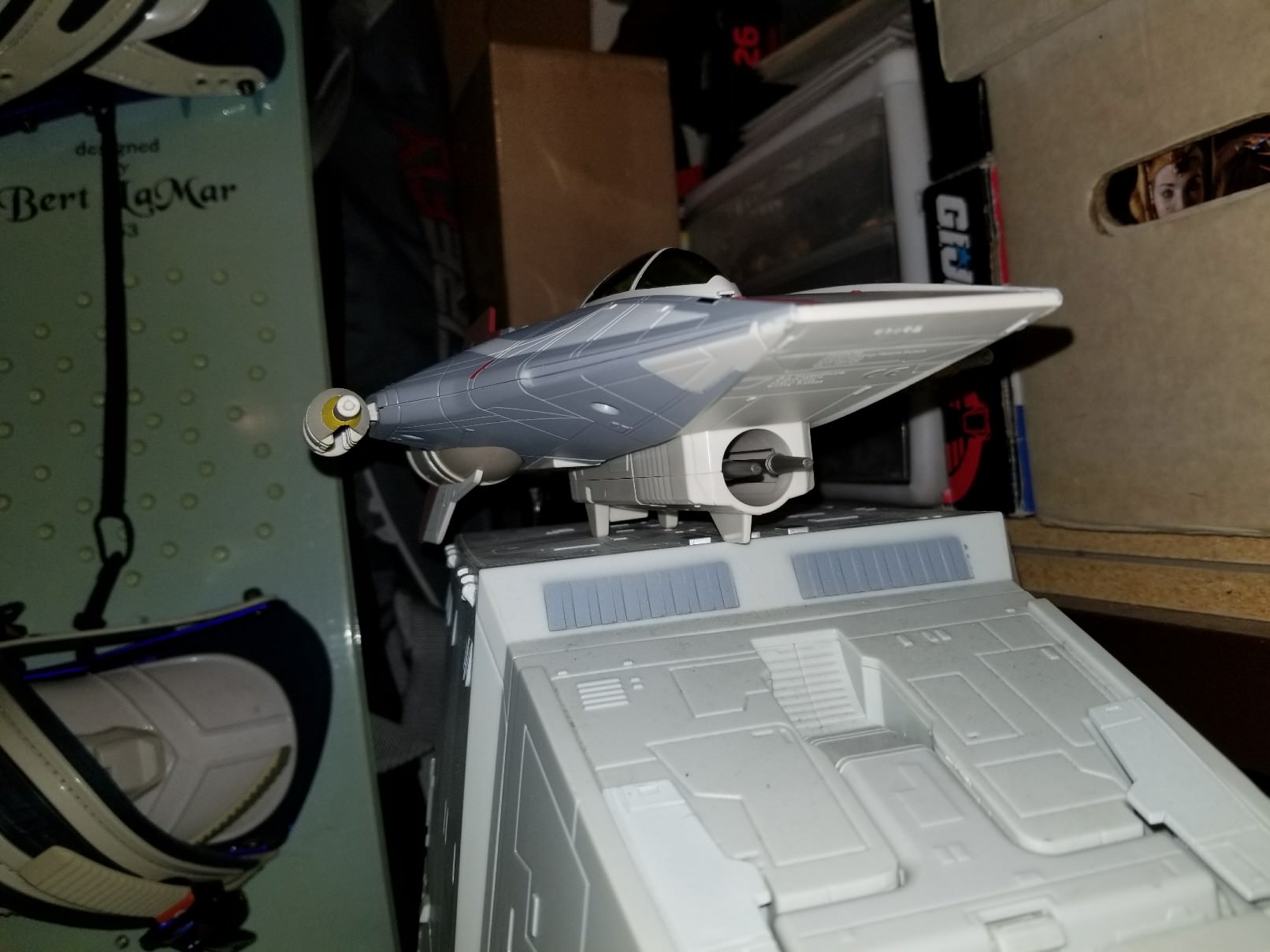 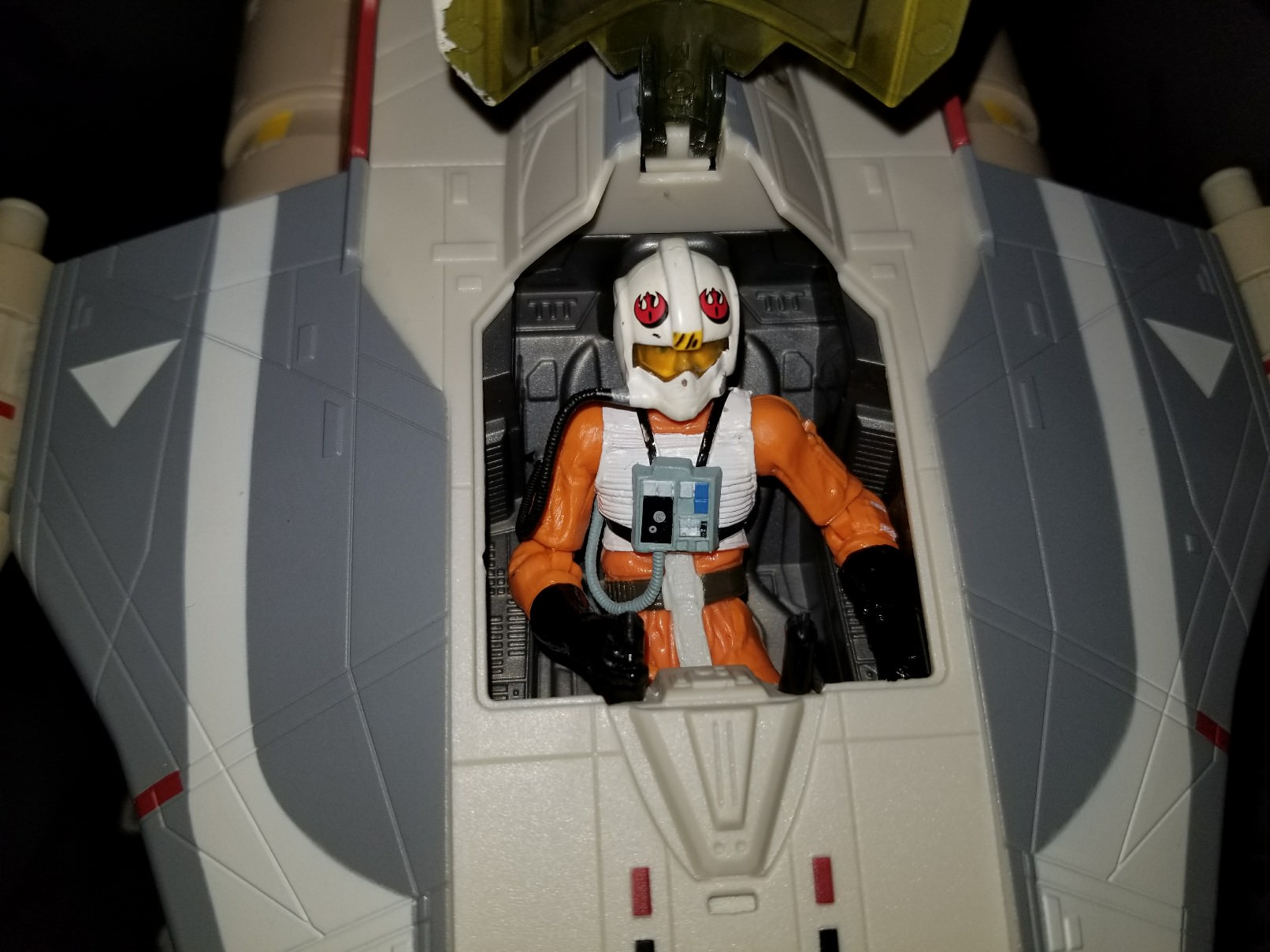 Like what you did with the Nerf launcher. Very creative.
N

Thanks! It took a while to figure out what to do with it. I wanted to just remove the entire Nerf assembly but didn't know how I would be able to make landing gear for it though and then got this idea when I was tearing apart my TLJ Ski Speeder and saw the cannons.
N

I changed my mind again. Because the guns were too long to retract fully and there is still a gaping hole on the front, I decided to ditch that idea and just make it a Advanced Scout A-Wing or something. Maybe even a transport ship where the bottom portion is used for transporting weapons or something for ground troops or just be part of a sensor array for jamming the enemy. Regardless, I'm happy there is no gaping hole on the front anymore. 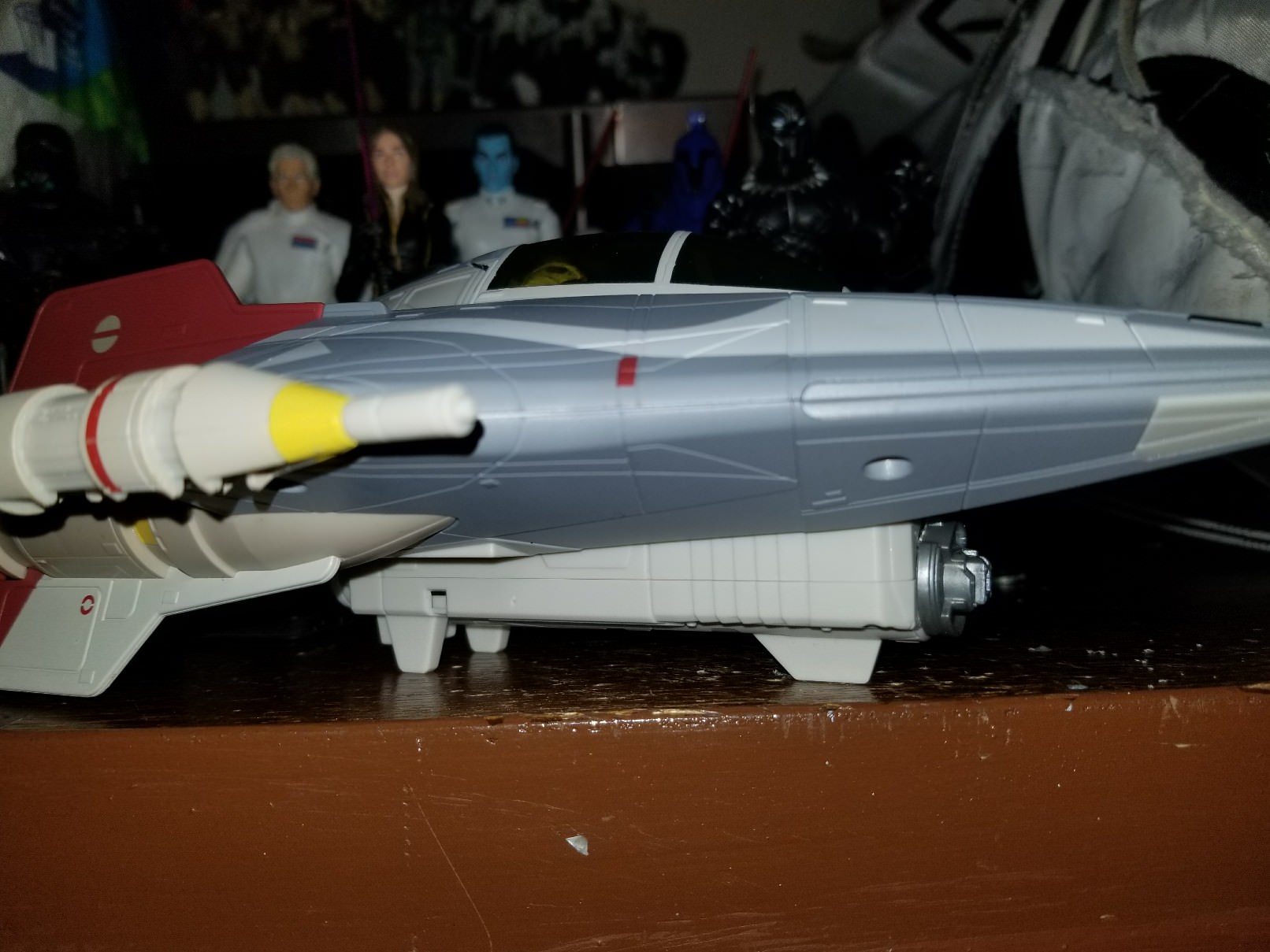 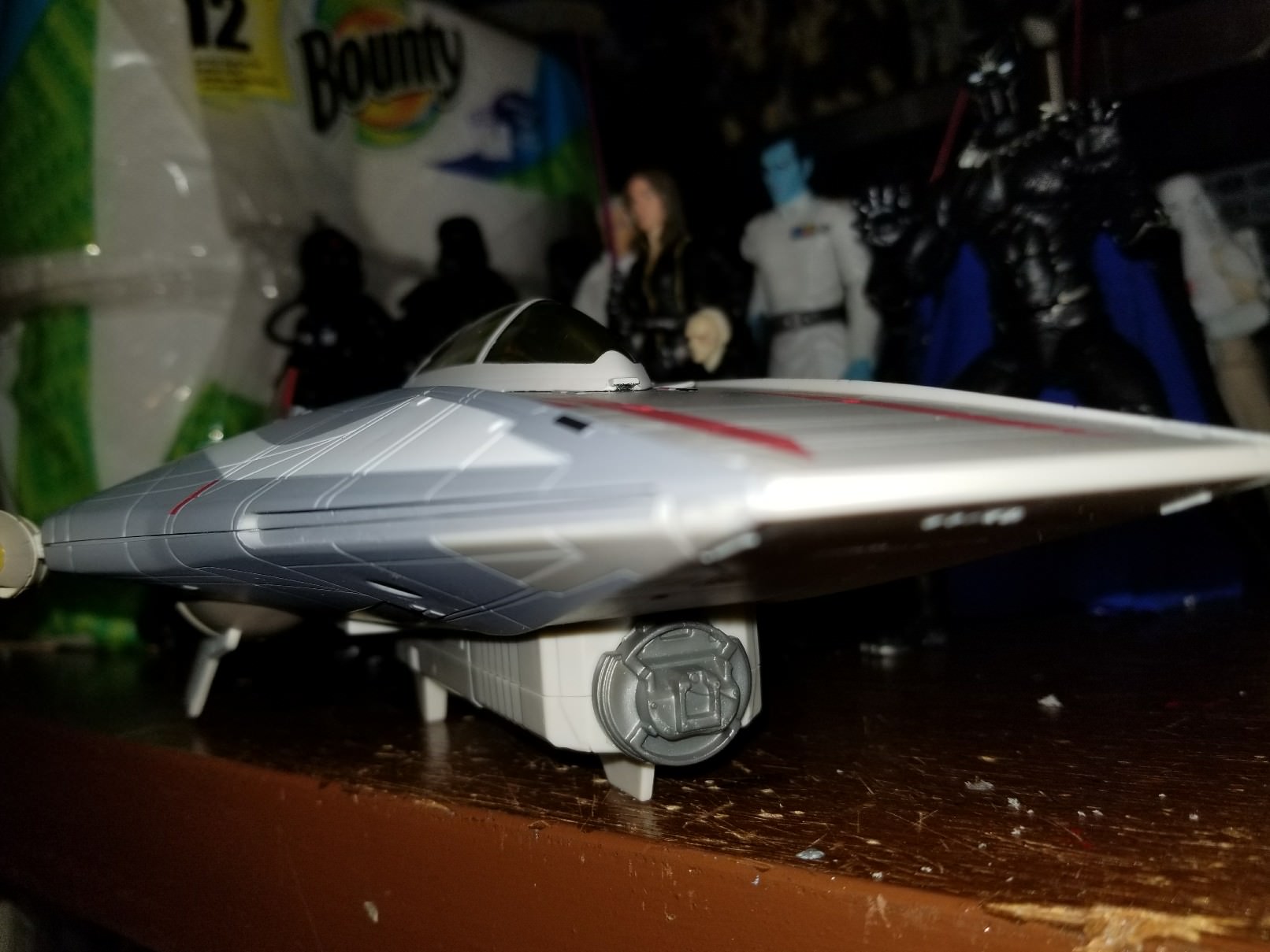 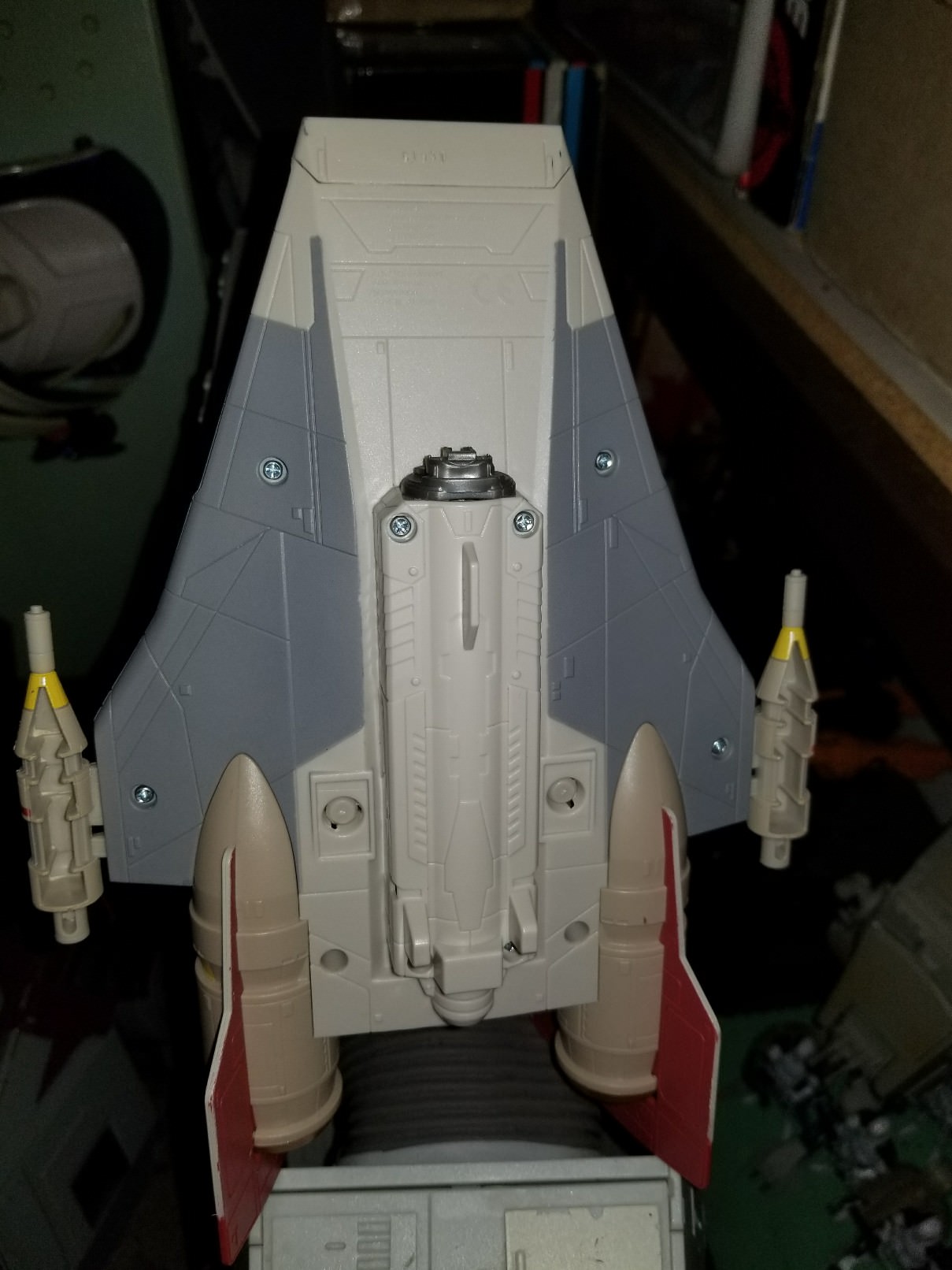 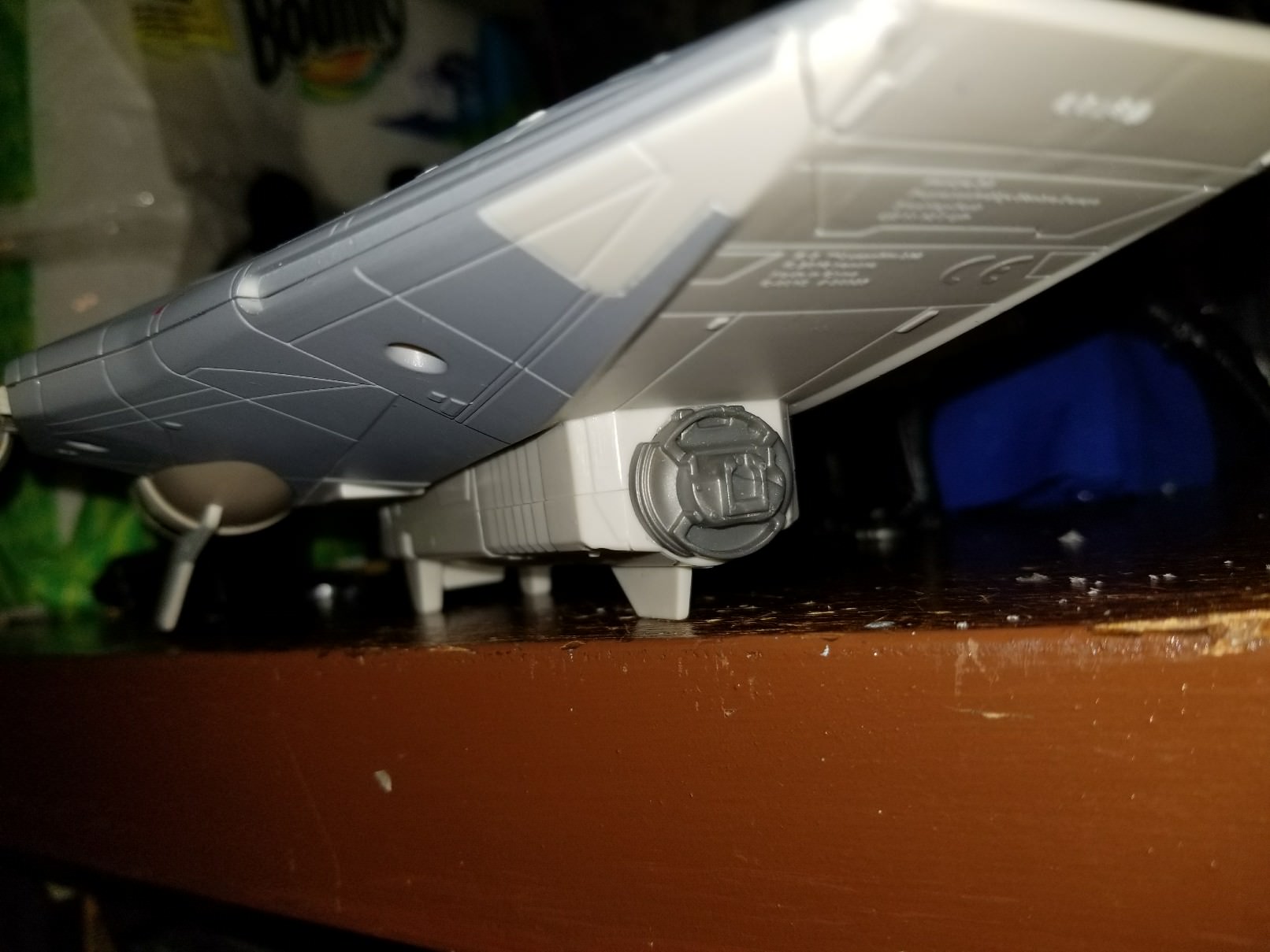 Nice pics. This Rebels A-wing is a great little vehicle. Glad I was able to find it for a great sale price about a year ago.

Ok, in spite of all my anti nerf ranting, I broke down and bought one once it hit clearance. And I gotta say...
This is a good sturdy mold. Very playable even for the resident 8 year old.
The nerf feature is a lot less intrusive and obvious than I expected. When I ordered it, my plan was to remove it. I may leave it as is for now.
Now to the criticisms...
I really don't get why they made the cannons hollow. Especially how noticable it is.
The last thing is the "wings" on the base of the cockpit don't arch downward to match the angle of the fuselage. Yeah, I know, knit picky. But that's just how I am sometimes...

Honestly without the Nerf gun on the bottom this version of the A-Wing something about the proportions and sleekness of the design make it really pop.
Definitely my favorite A-Wing

There was this issue with the canopy. I think this turned out reasonably well. I just sat it briefly on a hot steam iron in the room I was in (the ironing room.. the irony).. anyway I didn’t share back then.

According to the current canon the A-Wing, or its older brother the Spearhead, was among the first fighters the Alliance could lay hands on, in significant quantities (before that, I thought it was one of the last). So it's possible this nimble fighter had to carry on multiple roles it wasn't designed for, such as fighter/bomber. Along this line of thought, it's also possible these ships were equipped with single use, jettisonable, concussion missile launchers with enough power to cripple a Star Destroyer.

So imagine a full squadron of these birds, some with the mega warheads and some without -to provide cover- launching from Polis Massa during the early days of the Rebellion, and this toy starts making a lot of sense.

It's also nice that this toy looks perfectly in scale with the vintage -and POTF- X-Wing and TIE Fighter, which happen to be posibly my all time favorite Star Wars vehicles. So this is a perfect companion for the vintage line, maybe better than the Droids/POTF A-Wing which, along with the B-Wing, was among the first vehicles made in the new more realistic scale we have today

If it were for me, I'd also get it in Mc Quarrie blue, Rebels green and ROTJ red
You must log in or register to reply here.