....dude, this is why this site rules. Theres a Wal Mart about 30 miles from me I stop and check at that is on the way to a place I travel to, to play music sometimes. Any way the last time I stopped there, there were more than a dozen Gunships on a back wall of the store WAY away from the other toys, I dont know why I didnt think to scan one for a price because now that I think back, it was a clearence section. Its just that I never dreamed we would see discounts this deep after Wal marts being so resistive to any star wars sales that past few years. Anyway when I get paid this weekend I am heading to that spot ASAP, if they are on clearence for $10 Im getting a few. Thanks for the tip!!
C


Nate_M said:
I saw this one once in my Wal*Mart in the clearance isle (oddly enough, however, is was not on clearance)
Click to expand...

That's actually not odd for WalMart. That's why that aisle is sometimes referred to as the "clearaints aisle".
H

Yeah, My Wal-Mart has 7 of them in the clearance aisle that must have been in the back for a while since they have a lot of dust on them. They only have clearanced them for 29 bucks though! I bought one anyway just because i doubt my Wal-Mart will clearance them again as they never do this and i don't want to go there one day and they are gone.
M

Mynock09 said:
These showed up in Australia?? Hasbro says they won't be releasing the A-Wing in Canada.What a rip off for us here.I'm a short drive to the border but with exchange now it would cost me over $45.00 Canadian.Has anyone seen this at a Walmart Canada???
Click to expand...

I got mine back in November, don't give up hope just yet. Hasbro might release it this year for you guys. *Fingers crossed*
Click to expand...

I don't know much about the Canadian market myself for Star Wars and I'm in the process of opening my online shop to the Canadian market, I'm based in England, UK. I'm selling the A-Wings for £19.99, not sure what that would be in Candian dollars though. I've only just started opening up my stock of 30th Ann figures to Canada, not got to the A-Wing yet lol. But even buying from me, you'd have Royal Mail airmail cost on top plus any tax/duty for importing. I'm selling one boxed and one loose.

Anyways, what I did want to point out, like with all exclusive items, despite them being exlcusive to a specific store, for example, Ultimate Battle Packs Endor and Hoth, were exclusive in America to Target but have recently been made availabe to Toys R Us here in the UK, so, sometimes it is worth waiting a while. Ok, it took almost a year for those Ultimate Battle Packs to arrive in the UK, but at least I got them on sale for below the £59.99 RRP (I got them for £39.99 each) rather than me paying the £69.99 or above plus £10.00 shipping that conners were asking on eBay.

Same again, example, TAC 2007 Order 66 2-packs were exclusive to Target in USA then they were made available in the UK via Tesco one of our supermarkets some months later.

So if I were you, I'd wait a while, see what crops up in stores in Canada as some store exlusives do become shared exclusives over time. As you said, by the time you've drove across the border to USA, bought the item, then crossing back you're going to have to pay some form of tax/duty on it, take in the cost of gas too, you've paid a lot for an A-Wing then lol!
M

My pop pop got this sometime last week I think.

picked this up tonight for 10 bucks!

Picked one up for $20. Not as cheap a deal, but it's the only store in the area which has any left.


Deak_Starkiller said:
Picked one up for $20. Not as cheap a deal, but it's the only store in the area which has any left.
Click to expand...

Better then the $30 I paid, and I really only bought it for the Figure!

One of my Wal-Marts in town, the one I don't go to much, has about 7 of these still on shelf. I finally picked one up the other day mainly for Arvel. Still likng the ship though, even though I have the '98 version.

I only saw these ONCE but then again...I never really looked.
B

Picked up another one today for 20 bucks at Wal-Mart. Now i can return the one i got for 29 bucks. My Wal-Mart still has 6 left at 20 bucks if anyone is looking for one. Let me know.

I would not suggest anyone take him up on that offer - I bought figs from him a year and a half ago and I'm still waiting on them...he never answered my PMs once he got my money.
?

I've been catching up with the Vehicles this week, which for the most part were older ships. But today I'm spotlighting an upgraded vehicle...and a nice update to a pilot figure to boot!

So, my fellow forumites, here's a sneak peek at the GREEN LEADER'S A-WING FIGHTER, which will be posting later today. 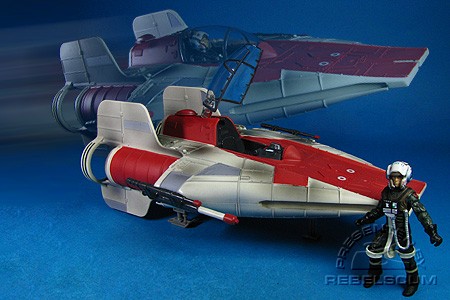 More to come all week long.... I'm in the home stretch at last!

Nice pictures Curto. This one didn't get a huge release here but thankfully I managed to get one before they all dissapeared for good. I'm actually surprissed Hasbro hasn't milked this vehicle for all it's worth with different paint variations.
W

Did the Arvel Crynyd figure that was released in the POTF cinema scene get renamed since he's obviously not the same guy as this Arvel Crynyd?
W

I think they are just calling him "Y wing pilot" now
?


GNT said:
Nice pictures Curto. This one didn't get a huge release here but thankfully I managed to get one before they all dissapeared for good. I'm actually surprissed Hasbro hasn't milked this vehicle for all it's worth with different paint variations.
Click to expand...

Thanks...I always dug this ship. It's a cool design.

I am positive we'll see this one released again at some point...possibly with a bit of EU inspiration.

I know the Red/Rouges X-wings have slightly different paint schemes. Are there any differences between teh A-Wing flown by Arvel and the one flown by Tycho?

Yeah this is a nice version, but it's really just a third re-hash of the old 80s Kenner 'Droids' A-wing isn't it? The Saga1 release still rules the roost IMO!!
Awsome weathered green detailing, & Rebel Alliance emblems - you can't beat it!

The TLC one is better - I the landing gear has been fixed and the cockpit redesigned...fits the TAC A-wing pilots better.

I have both this one & the Saga1 A-wing MISB at the moment, & didn't realise that the new pilots are hard to fit into the Green deco'd version.


Wagaboodles said:
Did the Arvel Crynyd figure that was released in the POTF cinema scene get renamed since he's obviously not the same guy as this Arvel Crynyd?
Click to expand...

According to wookiepedia it was based on Lt. Telsij, but I think that's just based ont he helmet.
T


CdtWeasel said:
I know the Red/Rouges X-wings have slightly different paint schemes. Are there any differences between teh A-Wing flown by Arvel and the one flown by Tycho?
Click to expand...

In the books more so than the comics, there are differences between Rogue Squadron and Red, but in ROTJ there's none partly because Rogue Squadron got reformed as Red Group for the Battle of Endor.

Bottom line, though, is Tycho's A-wing wouldn't be any different than any of the other A-wings at Endor.
R


Mr Curto said:
I am positive we'll see this one released again at some point...possibly with a bit of EU inspiration.

Are you hinting at a possible McQuarrie Concept Art blue A-Wing? Is this something that is currently in the works?

I don't want Hasbro taking shortcuts on a concept A-wing. From what I know, it's practically an entirely new mold. A close comparison of both has noticeable differences on every aspect of the ship.
R

I have noticed a small error on the A-Wing. I have circled in black what the error is, and in yellow I have circled where the red part is supposed to go. If you watch ROTJ, just before Green Leader crashes into the Executor you can clearly see the red stripe/block is on the opposite side of the toy.

Received this one from Amazon over the weekend. Not sure why I didn't pick it up when it came out back in 2008
I

Best version of the A-Wing available. I like the Green one but it has an outdated cockpit. I wonder if you can easily swap out the cockpit in this version with the older A-Wings?

lol, I only bough this for Arvel Crynyd. And just finally sold off the ship a couple weeks ago!
R

Internets said:
Best version of the A-Wing available. I like the Green one but it has an outdated cockpit. I wonder if you can easily swap out the cockpit in this version with the older A-Wings?
Click to expand...

I don't know, but I've had the same thought. Too bad you can't pick up the new A-Wing as easily as the POTF2 one, or buy the cockpit piece from Hasbro separately.
R

Masterfett said:
lol, I only bough this for Arvel Crynyd. And just finally sold off the ship a couple weeks ago!
Click to expand...

Funny. I bought 3 for the ships, and now I have two extra Arvels.
C

Walked into Phat Collectibles in Anaheim while on vacation and they received a large SW collection. Spotted the A-Wing as that is the only ship I need that I could fit in my suitcase.

I just acquired an Arvel figure with no helmet. Can anybody help? Also have Lt. Pollard from the Dagger squadron B-wing with the same problem...
S

Just acquired this A-Wing loose without the Arvel figure. Really nice ship, and I like the weathering and paint. Its interesting how it has switches to open and close the cockpit and landing gear. Now I just need an A-Wing pilot to go with it, but for now I'm just using one of my X-Wing pilots from the Yavin Pilot Pack.
You must log in or register to reply here.
Share:
Facebook Twitter Pinterest Email Link
Top