You sure that's a figure based on McQuarrie himself and not his concept art?

The McQuarrie Snowtrooper is in Wave 6, so it can't be a McQuarrie Series figure.
T

ah crap. i think it's fitting, given the whole McQuarrie Concept series and his impact on SW, but it's probably either gonna be a Ralph head on Rieekan or Ralph head on Derlin (less likely since it'd require a badge retool), with the same tiny blaster the Hoth Rebels got last year.

So much for a new SA Rebel Trooper to battle the VTAC Snowtroopers!

Called that one, yo.

This will be interesting to see.
And you totally called that one Inigo!

Very cool! This is a really neat idea on Hasbro's part to go along with the McQuarrie figures. It probably won't be a very complicated figure, but it's such a great idea that I won't pass on it.

Hmm, can't wait to see how this will pan out. If it is McQuarrie that would be cool.

Seeing how easy it would be to make Pharl from a Rieekan, this adds credence to the all-but-officially-announced speculation that 4-LOM will be completely new.

It's something I'll definitely buy, but I don't see any scenario where this doesn't pegwarm like crazy.
M

What about the no-repack rule? A headswap counts as a repack, right? I still think the Hoth general body can be improved upon. Even if it's not SA, at least it'll be more detailed.

No straight repacks. (which means it can be a retool)
T

They'll likely use Rieekan's torso, at least, due to the General rank, but maybe Derlin's arms for a bit more articulation. Maybe new legs with some added joints, for later use in SA Troopers.

Disappointing though it is (due to the likely simplicity of the figure and the fact it's not a regular trooper), I'll still get Ralphie-boy and alternate setting him up with his Concept creations and with his fellow Hoth officers; every now and then he'll have a chat with Stormtrooper George, and maybe later compare sketches with Spacetrooper Johnston (if they use that photo of Joe in the suit for reference!)
X

not psyched for this at all.. and i am usually all for odd background characters. I really would have prefered a new, SA rebel soldier.
S

I'm not psyched either, but even a slight officer change would be decent to have - perhaps they're saving the Rebel Snow Soldier (I think that's what they were originally called) for the Vintage line at some point down the road.

I would much rather get a generic "trench" trooper, but can wait for them to do it RIGHT - as it's one that they've missed by a wide margin a couple of times now.


Since1978 said:
perhaps they're saving the Rebel Snow Soldier (I think that's what they were originally called) for the Vintage line at some point down the road.
Click to expand...

I believe it was "Rebel Trooper (Hoth Battle Gear)" I'd actually rather see them do that one in the basic line where a running change to the head would be more likely.

I can wait for a SA Hoth Rebel Soldier as well, ideally Basic.

I don't like VOTC as a cocept anymore, it had it's time, they shouldn't resculpt them all to ever make a complete collection for completists anyway.

I like this idea, though an updated Hoth Soldier is needed.
Lets hope Hasbro adds Derlin's two arms to Rieekan's body or something like that! 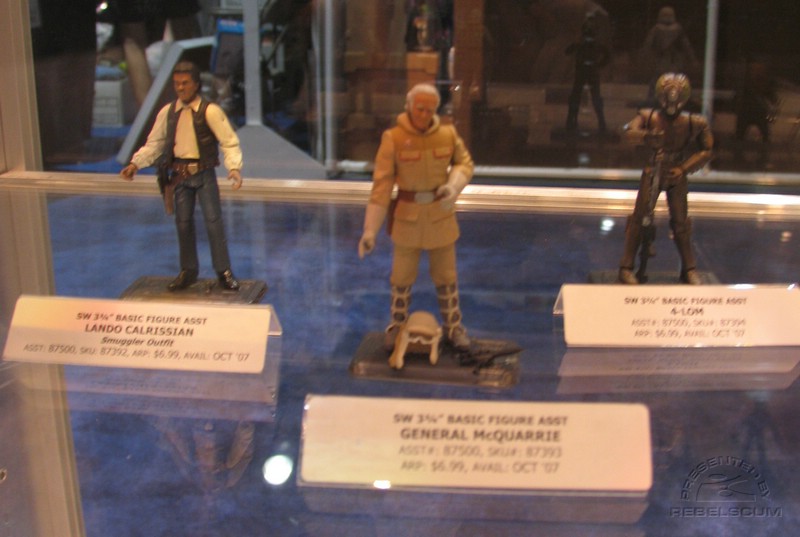 This is definitely The Year of McQuarrie. Not only is ol' Ralph getting tons of figures based on his artwork, he himself is getting immortalized in plastic.

Dang. And to think I was honestly going to quit for this year after I got the Death Star Trooper. Now I want General McQuarrie. Curse you, Hasbro!
N

This year is great when it comes to figures. I've been impressed by pretty much every figure I've seen this year. The McQuarrie General is one of them too. I can't wait.
S

Pass. I didn't really like the Derlin figure and the same figure with a new head isn't enough for me to buy it.
T

I loved the Bren Derlin fig, and I can't wait to get this one. It must be great to be Ralph Mcquarrie, 32 years ago he doodles some pictures for a movie that looked like a bomb, and over a few decades it becomes so huge he gets his own action figure, and figure concept set. Thats kinda the best thing ever!

I really dig the Hoth rebel officers. Pharl will get a spot on my shelf and will be waiting impatiently for some improved Hoth soldiers to command

was he actually in the movie, ive never seen him and Ive seen empire too many times to count!
T

Can't tell at this time if he's just Derlin with a new head (and hat, which was a nice surprise... hope it actually fits well!) or if they did kitbash him with Rieekan or retool Derlin's torso for the General rank badge. Can't tell either in the RS pic whether that's the standard DH-17 or the Rieekan/Derlin peashooter.
J

I'm not collecting the McQ concept figures, but I might pick this one up. I think it's cool they made a figure of him to kinda top off all the concept figures. Nice little tribute to such a great artist.

You cant have all the Mquarrie figures and not have Mcquarrie himself somewhere in the line. The figure looks fantastic... he aint going with my Hoth figures at all...his going to be the main focus in my Mcquarrie collection.

was he actually in Empire?? that irst pic sure looks like he was....if someone could point out what scenes hes in in TESB, that would be awsome!!
J

I think he MIGHT walk by during the scene where the one Rebel officer is saying, "Groups 7 and 10 will stay behind to fly the speeders."

it may not be a all new figure, but it is a very cool figure.

a very nice nod to the man who made some of the most memorable art we all know and love.

What a fitting tribute to a man, without whom, none of this would have been possible.

Hopefully Ralph gets as many of this figure he wants for free.

I like this idea a lot. It's great to see McQuarrie getting a figure; he'll look good with the Lucastrooper. Also, he appears to have the bigger blaster pistol!
H

McQuarrie's really in it -- do a "find" for his name here. There's a screengrab.
T

Some closeups & other angles have surfaced on other sites... he does indeed have a general's rank badge, though I still couldn't tell (and didn't exam it long) if it was tooled that way or simply painted. He also seems to have the standard DH-17, which is great... but I don't know how well it'll fit in the puny Derlin holster