Love it, especially for the blue-yellow Kowakian, wich is just perfect to be placed on Hondo´s shoulder

Real_Scooby said:
Love it, especially for the blue-yellow Kowakian, wich is just perfect to be placed on Hondo´s shoulder
Click to expand...

True that, I had not thought of that. Kind of want it now LOL

nightdriver said:
this isn't up yet, is it? can't find it on the site.
Click to expand...

This looks really cool imo. They should do more packs like this
G

Not sure about this one. I do really like the mynock though.

Kind of cool set, but some of the inclusions don't make sense. I don't remember seeing mynocks or boglings at Galaxy's Edge...or Porgs for that matter (which is kind of odd come to think of it). I may have missed them, there is a lot to see. I do remember a Loth Cat in one of the shops...that would have been nice to have in this set. I just wish they would release these in the already established format that they used for the Porgs and Grogu.

Kowakian Monkey Lizards have newly tooled, articulated legs. Includes newly deco version (blue/yellow) from TCW and GE. Mynock is a reissue from the '18 SDCC Exogorth Escape set. Porgs are from the '18 Porg pack.

Available for pre-order TBD. On shelf later this year. MSRP is TBD (lower price point than other GE sets). 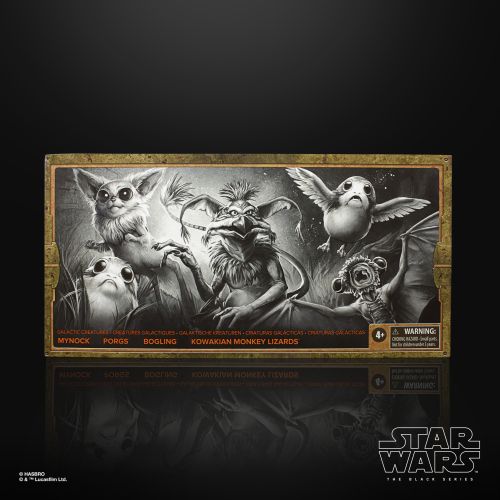 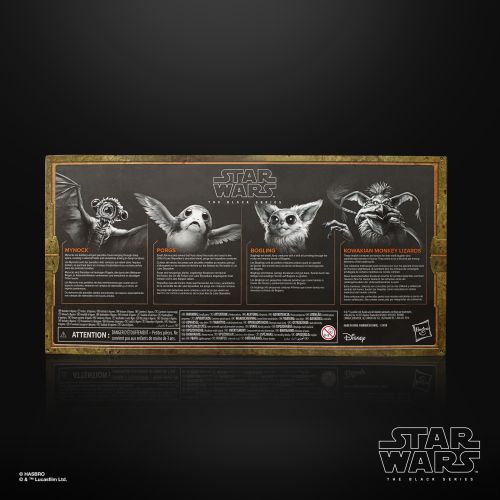 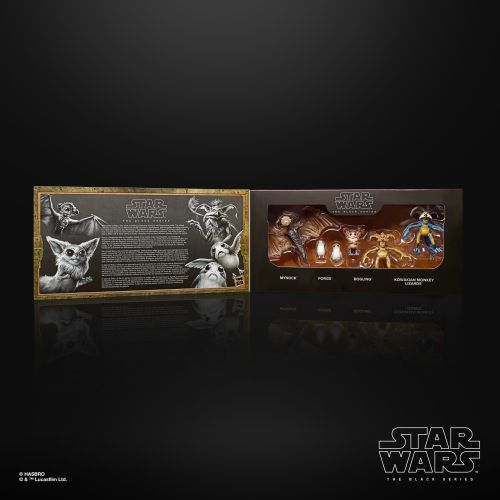 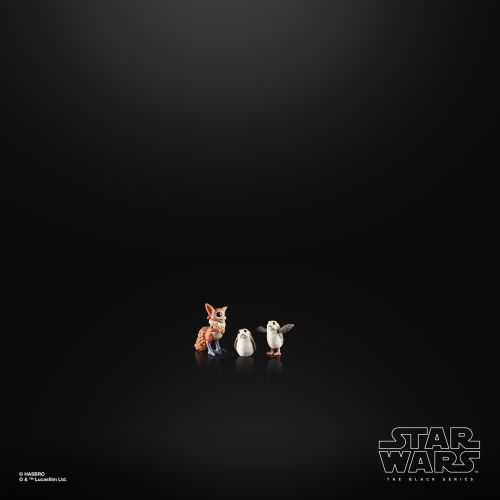 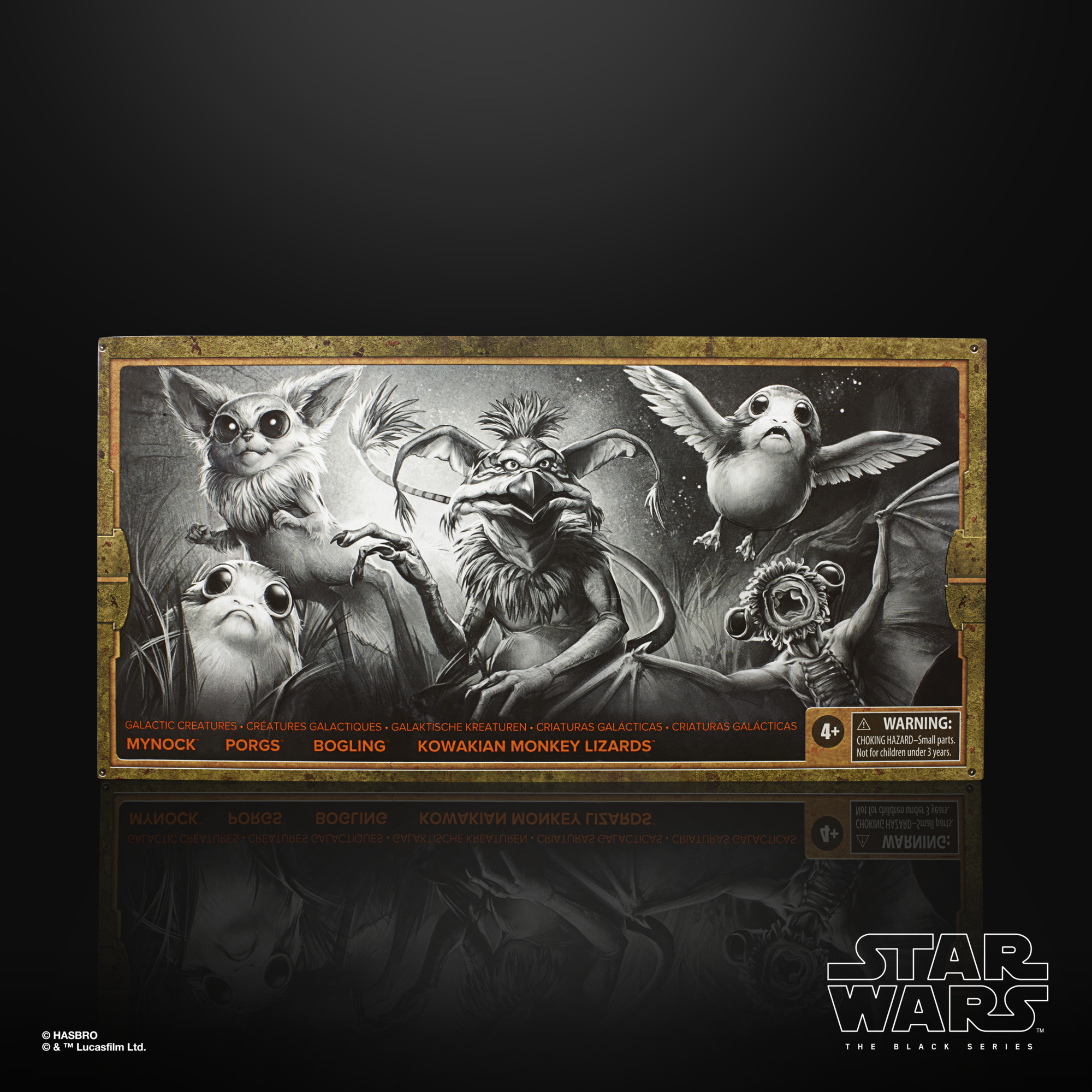 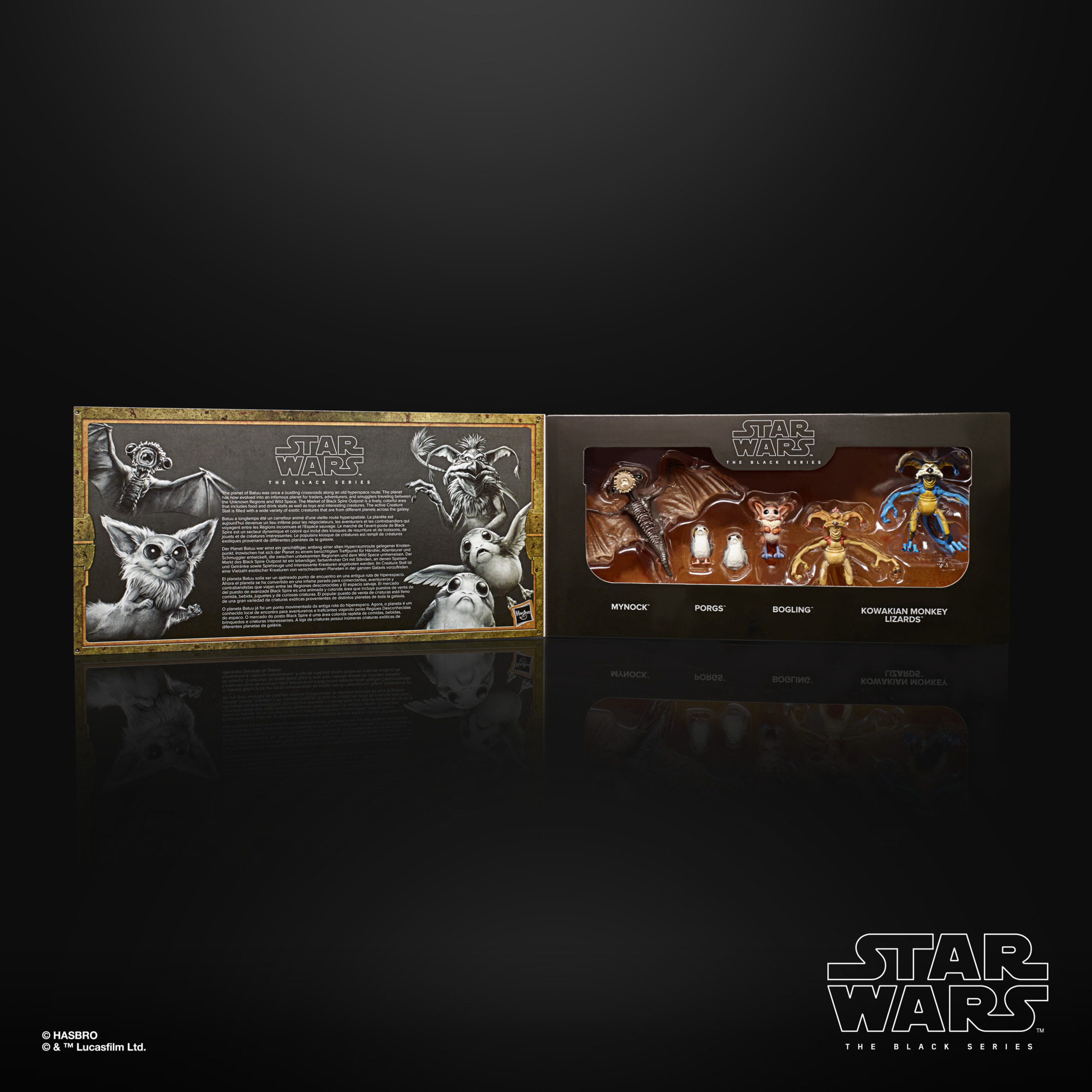 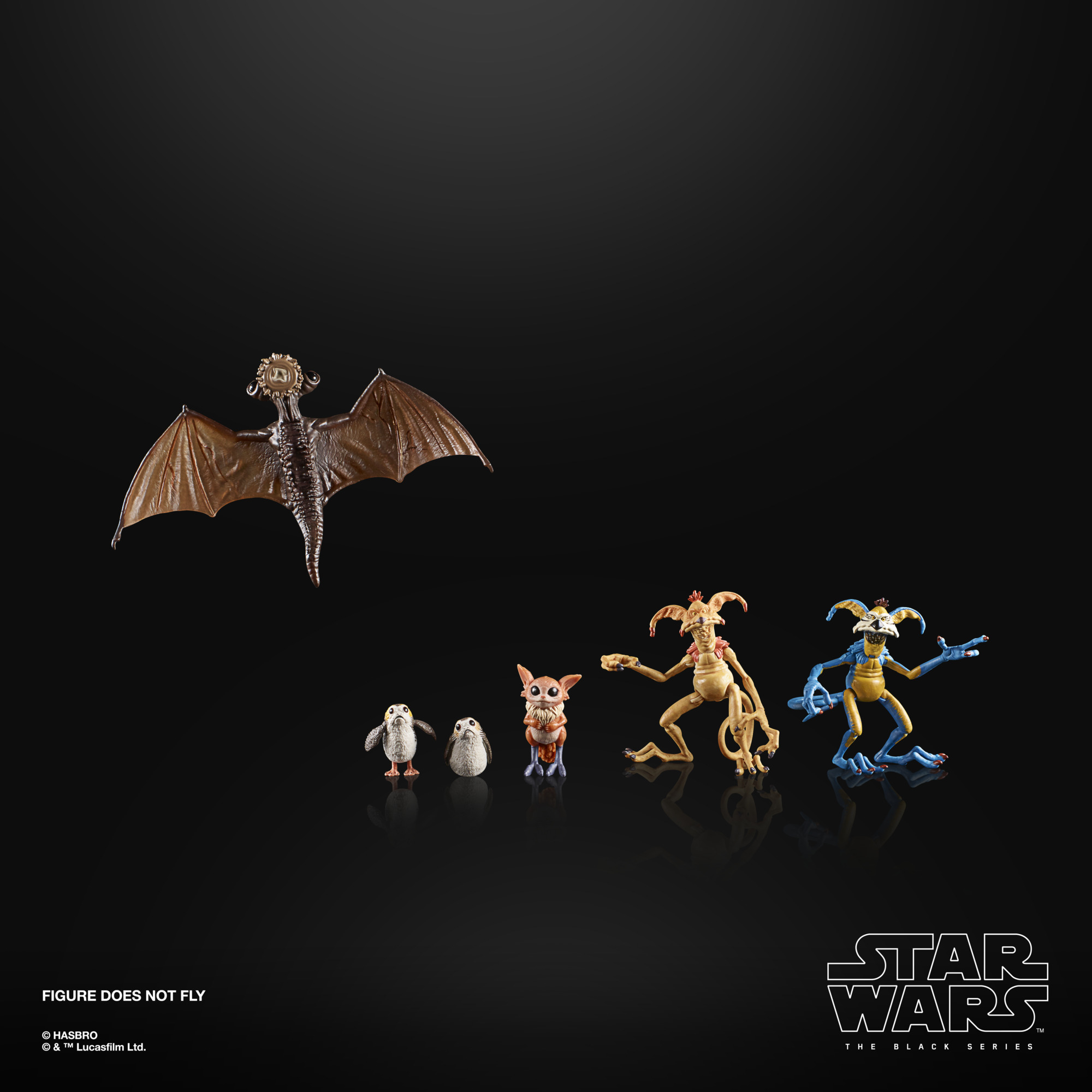 Those Monkey Lizards are SO Hensonian

"Figure does not fly"

I bet it does if you throw it hard enough!

Also, I could have sworn I saw an image of the mynock with some sort of stand...did I dream that?

I’ll take it, can’t have too many Mynocks and Loth cats.

I really feel like including 2 monkey lizards is a waste, I'd rather have a Krykna spider for variety's sake, since they just made one of those for the Target pack.
doubt I'd get it anyway though...

Any idea on the price? Watch it be some stupid high amount.

macross7 said:
Any idea on the price? Watch it be some stupid high amount.
Click to expand...

Officially, no, there wasn't anything in the press release. However, two of the three previous sets on ShopDisney were $69.99. This being a smaller set, I'm sure it will be less than that.
N

they said it would be less than the other sets. i wouldn't be surprised if it's the 36.99 price point of deluxe figures. that's my guess.

It’s a neat creature pack, I love the idea and look of it. Not sure if I’ll get it though, it’ll probably cost a fortune for figures that’ll be statues basically.

You’re right it’s the same animal that came with Deluxe Cal Kestis which I already have. So this set is probably another pass.

I like that set, just the Bogling is a weird choice, since it originate from a game. Would have prefered a Loth Cat instead. Maybe two, a sleeping one and one in attack pose.
Love both Kowaikians, Salacious to replace my 3.75 placeholder for Jabba, the yellow/blue to go with Hondo

Very cute set! Hopefully I’ll be able to get one.

Like it and will probably get one even if it is $50.

For those holding out for single releases of any of these figures like the previous 2019 sets, Patrick stated in today's Q&A:

There are no current plans to do so and there weren’t those kind of plans when those items launched in 2019. Target’s Galaxy Edge program provided a great opportunity to do that. If a similar opportunity comes down the line, we are certainly open to it, but right now the plan is for those items to be available only in the Galaxy Edge Sets.
Click to expand... 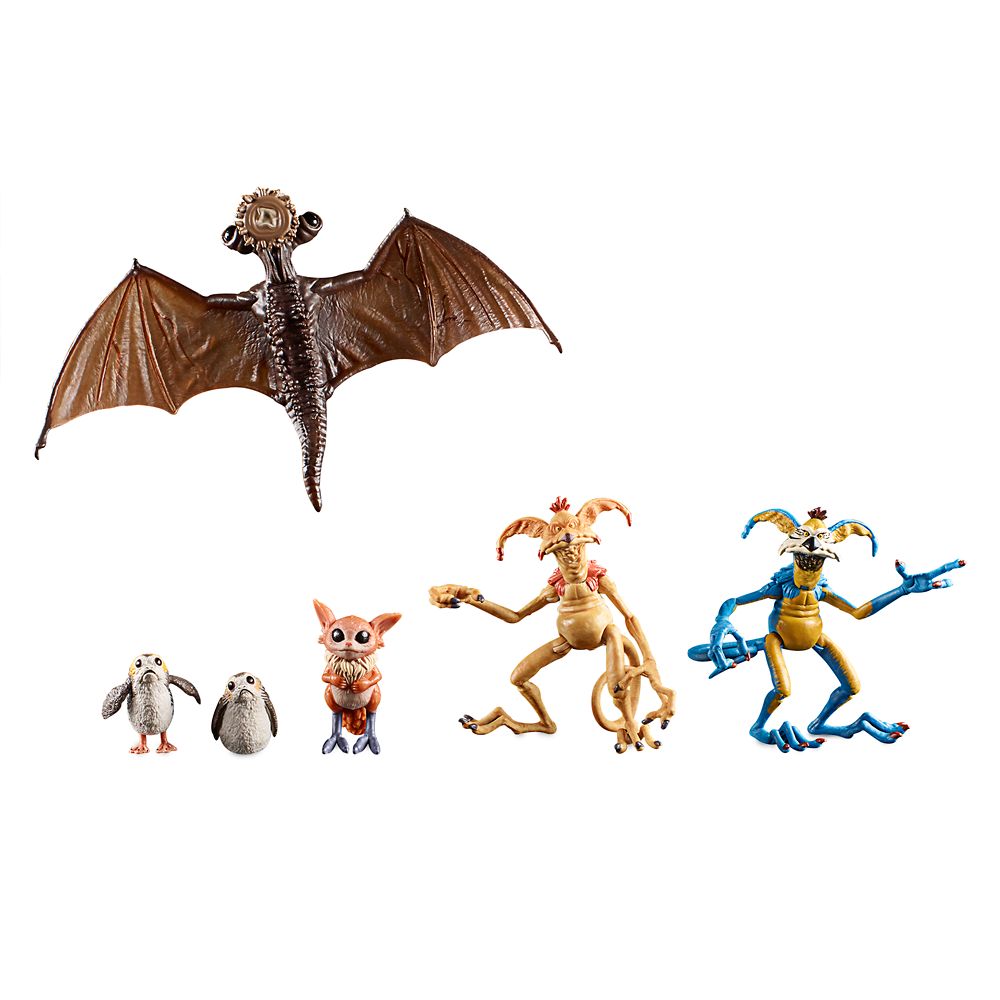 The Market of Black Spire Outpost is a lively, colorful area that includes the active Creature Stall filled with a wide variety of exotic creatures from different plants across the galaxy, including those in this detailed action figure set—a Mynock, two Porgs, a Bogling and two Kowakian Monkey...

The Kowakian Monkey Lizards make this tempting, but I will settle for Salacious B. Crumb in the inevitable Jaba the Hutt rerelease for the 40th anniversary of RoTJ.
T

And again, its absolutly frustrating being a european collector. NONE of the three sets are or will be available at ShopDisney.de ( Germany )
Besides the single boxed Pryde and I think Hondos R5, they NEVER had any other TBS figure in the past

If I didn’t already have a bogling and a bunch of porgs I would pick this up in a sec. I’m still tempted cause I really want those monkeys!

Will this be back in stock when it’s available? That Hondo one seems to be.

Strange, it was available right after the Rancor reveal cause I was checking the Monkey Lizards.
M

still possible to get these ?

Who knows if they'll come up for pre-order again between now and their release date. Or, if they'll even be available for ordering once they're actually in-stock. I'd just keep an eye on the webpage and social media for news.
T

I've got my two Porg packs, which were also overpriced.

JWFortuna said:
Will this be back in stock when it’s available? That Hondo one seems to be.
Click to expand...

No way to know; anything is possible, but feel like this is all they had for online purchase since GE merch is usually a one time thing.

I think the Hondo/Rey/Chewie set around because it wasn’t a huge seller. Not a terribly impressive pack aside from Hondo, who got a single release.

At least the first Droid and First Order packs had a little more appeal with Droids and troopers.

Might not come back for pre-order. Maybe it’ll be available in the future nearer to release.

It’s possible this was all they had allocated to ShopDisney and you may have to ask someone to get it for you once they’re available in the parks.

No way to know unfortunately.

I've got my two Porg packs, which were also overpriced.
Click to expand...

Especially when almost everything but the Porgs were only available in pricier sets and there’s a good repaint of the Kowakian Monkey Lizard included.

Feel like they could’ve charged more if they wanted to.

Shang-Chi - The Legend of Ten Rings

Didn't know anything about this before, but I thought its a nice opening for MCU Phase 4.
Can't wait to see The Eternals

Venom II - Let there be Carnage
Nice one too, did like the first one more, but still a great popcorn-flick
Was pretty much caught by surprise with the last scene, when suddenly the multiverse-jump popped in, just in time for the Peter-Parker-is-Spiderman reveal.
Can't wait how this turns out, propably in the upcoming Spidy III

oops !! wrong thread
You must log in or register to reply here.