Intended as an exclusive for Star Wars Celebration Anaheim:

You don’t have to travel to Anaheim to pick up this year’s convention collectibles, toys, and more!

$200 for the Deluxe FO Stormtrooper?? Is it all of them rolled into one, or is it just because of the shield?? What exactly makes it deluxe?
T

Marvelito said:
$200 for the Deluxe FO Stormtrooper?? Is it all of them rolled into one, or is it just because of the shield?? What exactly makes it deluxe?
Click to expand...

Yea I'm interested in seeing what pushes a mini bust to $200!

Historically deluxe busts have different arms and accessories for different display options, so my guess is that it has different arm options with different weapons. I doubt it will have the different shoulder colors since gg has never done a deluxe with them.

$200? Wow! Even if it can be displayed numerous ways with different arms, it’s still only one minibust. Personally, I wasn’t interested in this piece anyway but at that price it doesn’t even warrant an impulse buy.

I'm a pretty patient and understanding guy with pricing and all this, but this one doesn't seem right... first, we've already got a First Order Stormtrooper. Sure, there's a version here with an orange pauldron, but considering most of the first round came out yellow and we still paid full price, $200 for an alternate take on that with some extra arms that are going to sit in the box doesn't sound like a good deal or use of time and resources.

Alternatively, one deluxe one for $200 and two more alternate versions at $120 each... one of which is the same plane FO Stormtrooper we got last round but re-done, is even more of a head scratcher. It feels like they're really daring the collect-them-all guys like me to end that habit.
B

Not to mention...they chose the wrong troop builder for this idea, OT Stormies and clones sell, not First Order stormtroopers. Poor Sideshow is still trying to get rid of Hot Toys Stormtroopers from The Force Awakens in 2015.

These look like post TFA with the updated frown. Still, risky move making busts from the ST.

Breaking the three First Order Stormtrooper Mini Busts into three separate threads since they are all different. This Deluxe one will be a Premier Guild Exclusive now.
J

Curious what the 4th version in the header image is about, with the black pauldron and holding the blaster with both hands?
My guess is the deluxe will have 2 Pauldrons, 2 right arms, a large and small blaster, 2 left arms, a left fist/hand and shield to make all possible configurations. The only way it might be worth $200, or less after coupon.

This was fine back in the day when the PT clones and Sandtroopers were released. The price in those days was lower and to me they were more interesting characters. These FO troopers are lazy releases, including the gorilla one disgruntledjawa pointed out. Do DST/GG remember at all what we celebrate this year? Shouldn't something related to TESB be more appropriate for Celebration? So far I only have two mini busts to acquire in the foreseeable future: McQuarrie/Johnston Fett and Bespin Luke next year. I'd love to buy more mini busts, but no love for previous trilogies. That's all I'll say. I know I'm a very unwelcome member with strong opinions.

I know I’m only echoing what everyone else has said but for the sake of product feedback- I already have the previous two first order troopers and I won’t be buying any of these ones. I would however have bought a new deluxe Stormtrooper bust.

For the fans of the Sequel Trilogy and GG, this could be quite an expensive proposition.

Sorry but no deluxe features, justifies 200 for a mini bust imho...nonono!

when there were a second body, to built up two troopers, that would be cool and fair!

Very close version from the Fn-2199 bust already done. It's an eassy pass for me. There are a lot of new sequel minibusts that can be done instead repeated characters with new positions...
A

Up for Pre-Order now!
A 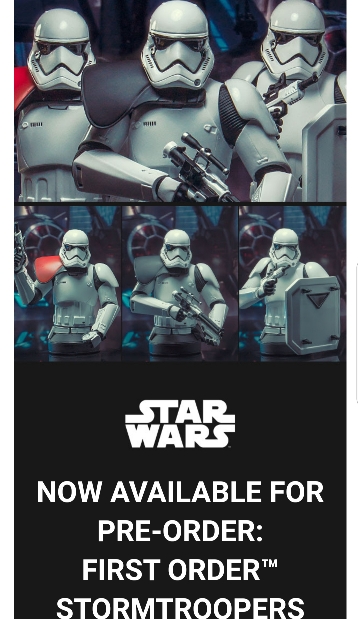 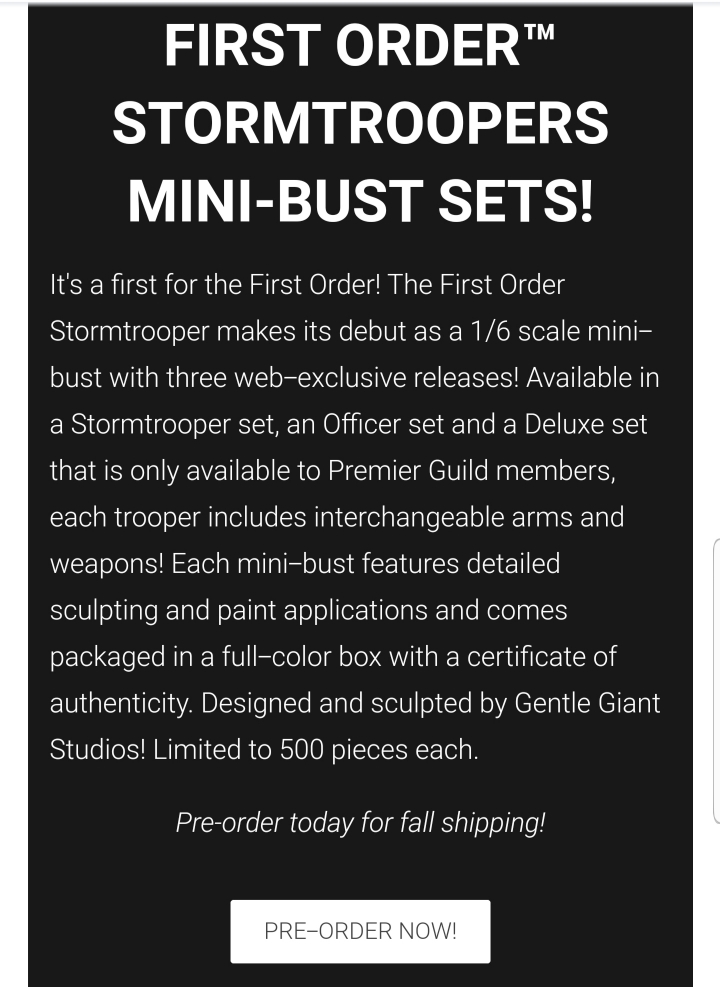 Sent from my Pixel 4 XL using Tapatalk
Click to expand...

I like the idea but we've already had 2 First Order Trooper busts, these troopers don't sell like OT Troopers or Clones and its almost a year since the last movie. I think new sculpts of OT Stormies or Clones would be better received.

Pass. I do think these promo pics look better then the promo pics released by StarWars.com a few weeks back.

I'm a little confused... if i wanted to display what looks like all 4 options for all of the various stuff they showed today, I'd need to order:

Looking at it, for $200 ($180 with PGM), you get one trooper bust, with 8 different arms. Basically you'd get red pauldron, black pauldron, blaster and shield.

Or for $120 ($108 with PGM) you get a trooper with the orange red pauldron. Or the other trooper with comes with the blaster and shield. These are two separate trooper orders though.

But, not sure I'll get any or not. Got one with a shield and one with a blaster. Maybe the pauldron one if any...

At the moment I basically ordered one of each set. With the PGM discounts and the $35 I had in rewards, plus $8 to ship and no tax, it made it $360 for all 3, which isn't terrible.

If they wanted to do a sequel trooper minibust, the good choice would be a Jet Trooper... But this 3 minibusts are very close to the other first orders stormtroopers minibusts released in the pass...

Yep, those are the two I already have, so I may get the pauldron one and call it a day...After all these busts coming in, I don't have near as many on pre-order, so always good to fill that bucket back up

Glad I read this thread. Almost ordered the deluxe thinking it was three different busts, since it has "set" in the description. And here I thought it was a great deal. 3 busts for $180! If I didn't have the other FO trooper busts, I would have got them.
J

Not to hijack the thread but I got an email saying I have 120 reward points? Any links that explain where I find a running balance, how I can redeem them, what I can redeem them for, etc?
B

Go to gentle giants site and click the blue icon in the bottom left corner.....should see current and history as well.
B