I know it's a generic question but what is your absolute favorite vintage figure in the entire 78 to 85 line? No Droids or Ewoks. I'm going with the original Luke Skywalker w/ dark brown hair. I remember that being my favorite as a kid too. Runner up is Bespin Luke w/ brown hair.

As a kid it was the At-At driver. Just thought it looked cool.

For me, Luke X-wing pilot... close second was the Jawa.

too tough a question
Darth Vader was my first favorite,
then Boba Fett came along
Then tied with Luke Jedi.

Original Luke was my favorite as a kid. Then came Boba Fett and it became my all time fave. Luke Jedi was close though. Loved the hooded cloak.

As a kid: R2D2 (still is the figure I have the most of), with Stormtrooper/Biker Scout as close runners up.
As an adult: Probably Boba Fett or Blue Snaggletooth (because I never knew about him as a kid), still like them Stormtroopers too.
P

Lifelong Luke Skywalker fan. I got Farmboy Luke during the 1978 run - his neck peg was defective and his head, which was always unnaturally tilted to the side, broke off soon after I got him as the result of a horrible Fisher-Price car crash at the bottom of the neighbor's driveway. My mom refused to buy me another one, and I really don't even know if they were available.
So after an eternity (12-18 months?) of being Lukeless, I got the lemon-haired Luke Skywalker (Bespin Fatigues) figure during the lead up to ESB. He went with me EVERYWHERE for years.
Still my favorite from that era.

If so, R5D4 and hoth snowtrooper

Boba Fett got the most play when I was a kid. I also loved Hoth Han as I could kind of fit his blaster in his holster. After those, it was Tie Fighter Pilot, Luke Xwing, and Biker Scout.
W

If so, R5D4 and hoth snowtrooper
Click to expand...

This particular variant not because it is more rare but because it is the variant I had as a kid. I wanted Jedi Luke when I was a kid forever but could never find it. While on an 8 hour drive to visit family, I talked my parents into stopping at a Toys R Us. I found Jedi Luke there and it was the ONLY time I ever saw Jedi Luke in the stores. I guess I didn't really think the blue lightsaber was weird given that farm boy Luke and Bespin Luke had yellow lightsabers.

In the late 1990's, I found a really nice snap cape blue saber Jedi Luke at an antique mall for $50. That's still my favorite Star Wars figure in my entire collection out of everything old and new. It's probably one of my top 5 favorite figures out of everything I have.

My absolute favorite figure as a kid was Yoda - easily played with that figure more than any other, and it was small enough that I could slip it in my pocket when we went places. I still have my original figure, as well as my brother's Yoda as well! They're of course missing all accessories, but a number of years ago, I bought a mint / complete version at a local comic shop. 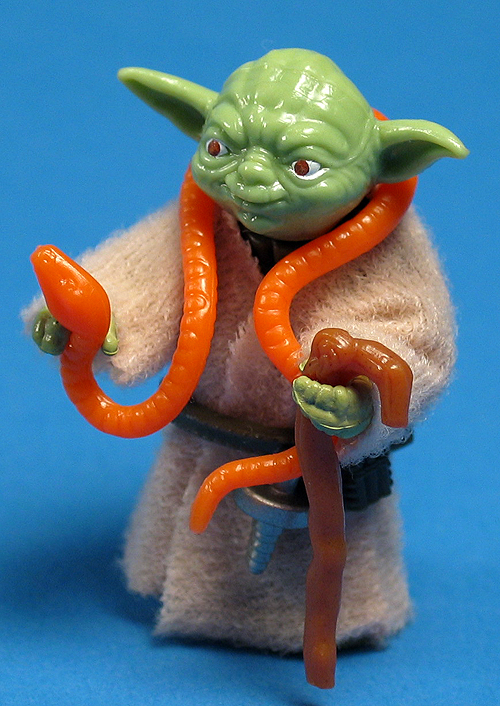 As for animated figures - thou shall not exclude Droids & Ewoks, they are every bit a part of the Kenner line, and I adored them as a kid, especially the Ewoks line. Logray was my favorite, he went on many adventures in my yard and throughout my moms house plants, lol. 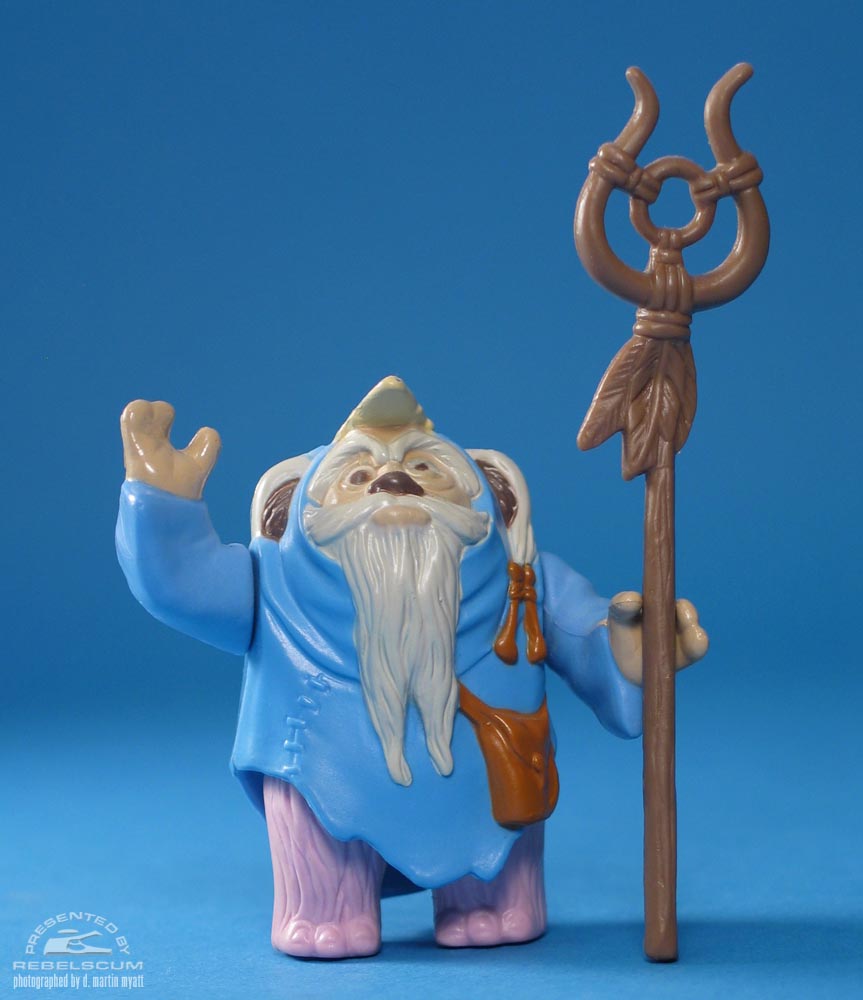 Hands down it’s Chewbacca for me! He has the best lines in all the movies. I even have one in my car for co-pilot reasons! K
C

Too hard to choose between Boba Fett and the Royal Guard.

I think this is one of the more accurate sculpts and designs.

Also, I'm a sucker for well done soft goods on a figure. 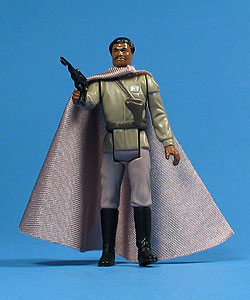 That's a tough question, I have gone by this thread multiple times times and thinking, do I have to just pick one? Well, I've thought about it and you guessed it, Blue Snaggletooth. I think runner up is the Jawa, I think partly because of the mandalorian.
A

The first figure I picked out to buy was 12 back Luke so I think that was my first favorite.
When Boba Fett came out he was immediately my new favorite figure and I didn’t even know who he was, lol!
Now I’m a big fan of the Imperial Gunner and I didn’t find out about this figure until I was an adult! As a kid it was one of my most wanted figures to be made, but I quit collecting after I got the Anakin mail away so I didn’t find out they made the Imperial Gunner until 1996 when I started collecting again!

I hold genuine affection for so many of the figures, but I guess at the end of the day, it has to be the humble orange vest & boots (ie, not screen accurate) Rebel Soldier in Hoth Gear. 3.75" or his many Micro poses. I was an adult before I figured out the tauntaun from Hoth Turret Defense wasn't ridden a lowly trooper.
D

From TESB, Boba Fett because it Boba Fett & a very close second was my first Ugnaught, you don’t know how many times the Imperial & later the Ewoks tried to put an apple in his mouth before cooking him over an open fire.

From ROTJ, Rebel Commando because I had also had a small army of them & Salacious Crumb because he was always causing trouble with Yoda, Wicket, Piggy the Ugnaught & Robin the Jawa.
M

Amanaman with Bossk a close second.

Excluding main characters
next favorites were the bounty hunters Fett Dengar, bosk IG88 zuckuss (didn't have 4lom)
But the one that stands out in my memory is Hamerhead because he had the eyes looking sideways so he would always be positioned as such, spying (whatcha talking about Willis?) this gave him a fun character trait.
A

Come on, how do you pick just one lol.

I'll go Biker Scout. I know my dad bought it for me, and ROTJ is the first SW I really remember seeing at the theater.

Third would be everything else.
W

aroz13 said:
Come on, how do you pick just one lol.

I'll go Biker Scout. I know my dad bought it for me, and ROTJ is the first SW I really remember seeing at the theater.

I agree. Choosing one is hard. But don't we all typically have that one figure in the back of our heads that just stands out more than the others? Especially for those of us who had them as kids? Biker Scout is a good choice. Very cool figure and nice tie in w/ your memory of seeing the movie in the theater.
7

Mine was Bespin Luke.
D

it changes every time i look at my collections. There are so many good ones.
Right now: probably say R2 pop up
A

Wtrailer said:
I agree. Choosing one is hard. But don't we all typically have that one figure in the back of our heads that just stands out more than the others? Especially for those of us who had them as kids? Biker Scout is a good choice. Very cool figure and nice tie in w/ your memory of seeing the movie in the theater.
Click to expand...

So while Boba is clearly the coolest figure, I don't remember the who/when, so he doesn't have quite the nostalgia as Snowtrooper or Biker Scout. I remember losing Bespin Han only a couple months after I got it, and Hoth Han lost his head in the sandbox. Fast forward a couple decades, biker and the Hans were the first vintage figures I re-purchased.
T

When I was a kid, my favorite was Bossk. I would put him on a dewback and have a lizard-warrior set up.