Looking at the fresh images it looks like actor Richard Moll. really not a good figure, pity.

tunghori has the whole set up but the price whew! Hopefully this means these are close to hitting retail and we wont have to wait very much longer!

^ depending on local retail statis of current stock, the "wait" shouldn't be too much longer. my local target had eu "on order", ie little grey tags on pegs, but then removed them at reset, so who knows, but in the meantime, check out the dates given in these:
http://www.sirstevesguide.com/index.php?categoryid=13&p2_articleid=2728

My credit card was charged for my case from EE last night.

despite ordering on when they went up- around 2/23, my ee acct page hasnt updated- usually takes 1-2 days, yet and i havent checked w/ my cc bank yet, but i am confidenet all will be ok

Starwarsshop.com has this pack in stock along with Tholme/Tra Saa, the Cody pack and the Black Hole Stormtroopers pack.
T

Key word "had"... I just stumbled across them a few minutes ago. Went to add Exar/Ulic to my cart... "error".

Went back, then refreshed the Action Figure page... and Exar/Ulic vanished! So it sold out while I was there.

I did order Tholme/T'ra Saa, and a CIV t-shirt for fun. Passing on the Blackhole Stormie & hologram for now...
S

pikced up the pack today at trus...they had all the new comic packs.


spawn44 said:
pikced up the pack today at trus...they had all the new comic packs.
Click to expand...

Where are you from?
S

Looks like BBTS has these back for preorder. Reordered mine.
R

From the front the Exar Kun figure's face kind of reminds me of Christopher Neame (Jerec) from Jedi Knight.
J

just picked up this comic pack at my local Target! Can't wait to open it!

I got this pack today, an I have to say, while it sucks that the comic pack line is ending, it feels complete enough with this release. This is the release I've hoped for since the start of the line, and it's executed quite well. It's not perfect, but Kun looks much better in person, and the figures really capture the feel of Tales of the Jedi.

Now I just need another set.

Finally I have my Exar and Ulic figures! I have been waiting for these since they were first rumored awhile ago. Sadly, I have to say that I am very disapointed.

Exar Kun is not a middle aged man. He is in his late 20's/early 30's, and the Hasbro figure is just too old looking. Not to mention that the overall figure just looks "off". Kun was supposed to be intimidating, menacing, this figure is not.

Ulic Qel Droma could have been much better. First, he didn't need to look like William H. Macy! LOL Second, they used the wrong body/clothes version for the Sith head with scar on the forehead. The body they used was from the earlier Tales of the Jedi comics not from when he became a Sith Lord. Could have been much, much better.

The only saving grace is that they made the fully articulated and did not go like they had in the past and made some joints with no articulation.

All in all, I am a sad Jedi. I was hoping for better. Why Hasbro?


Dark_Jedi said:
All in all, I am a sad Jedi. I was hoping for better. Why Hasbro?

Because they, sadly, gave the line very little in the way of resources early on, and failed to look to what 'old-timer' comic fans would want. Just about anyone who got into SW comics during the '90s EU boom was jonesing for some Dark Empire, Tales of the Jedi, and Rogue Squadron love. Well, we've got Rogue Squadron love in spades, thanks to all the handy pilot bodies, but did get a bit screwed over with Dress Uniform "low budget" Wedge, Too-Tall Can't Fly An X-Wing Hobbie, and "Gah! What happened?" Baron Fel.

Dark Empire... I'm kinda surprised it took so long for them to do just ONE set, and it was from DE2. But there was a cool Luke (hampered only by his action-stance legs & plastic cloak) and cool-yet-very-creepy half-naked Palpatine.

TOTJ though... been a long time coming.

Ideally we'd have had two Ulics & two Exars by now. One set of them as Jedi, one set of them as Sith... and, also ideally, only the Sith Lord set would have 'em packed together. Jedi Ulic could've been packed with Nomi Sunrider, and Jedi Exar with Vodo-Siosk Baas. Yes, many TOTJ fans would've perhaps complained a bit on having slots taken by 2nd Exar & Ulic that could've gone to Cay Qel-Droma, Arca Jeth, or any number of other characters... but ultimately that would've been a pretty great 6-pack of TOTJ love right there. Cool alien Jedi Master, two main heroes/villains of the series, and the main heroine.

Ah well. Maybe it's for the best? If they'd made these figures back in 2007, at least one would lack knees & ankles, and the other would have swivel shoulders

Cool set, not much to say since I'm pretty lacking in knowledge on the characters, but the double bladed lightsaber set up is damn nice, and the characters themselves are well done, even if their apparently off from the original likeness.

Can't beat full articulation either, I hate it when they skimp!
G

Great looking figures from the set I saw today (at a Target). I skipped it since I didn't know the source material, but the costumes will set the figures apart as much as the Legacy comic pack figures from the movie era types.

Received my HTS order on Friday.

Ulic, "I'm never going back with you!"

Dunno if this set - or any of this last crop - will show up around here. The Wal-Marts are all inundated with that exclusive Amanin/RebelPilots/Ewoks wave.

Here is my Exar Kun with some modifications.

I hadn't looked too much into the figures, so was pleasantly surprised by the level of articulation. Such a shame they've cancelled the comic pack line

These two look great standing at the front of my collection

I just got this set delivered today from HTS. Very nice, too bad I know nothing about either one. They still look well done.

Found this at Target in Oklahoma City.
D

Received this set (along with the Blackhole CP) from HTS earlier this week. Since these two characters have both been among my top 5 wants for nearly 10 years, I was sooooo glad to finally have them! They're exceedingly cool. I was worried my son wouldn't give them any respect, but he loves them! (And is starting to read the 4 graphic novels I have featuring Ulic.)

Got these two fantastic figures from HTS today and I love them. I only have two complaints
1. Hasbro really did Exar's lightsaber hilt no justice at all. Not even close to accurate.
2. I don't remember Kun having grey hair, I thought it was jet black. Kun looks like he's 65 or 70, an he should be in his 30's.

Yeah Kun suffered in this set a bit. i just got mine from ebay (Along with Tholme and Saa) and while i like Ulik ok, Exar isnt as cool. The Saber ios pretty weak, the lack of paint detailing in the scars, the skirt that hunders movement...just kinda meh. Not BAD, but not as cool as it could have been.
Ulik is better, but he has a very bland face and expression. I wish he was a little angrier, to reflect his growing dark feelings.

A good set overall, but could have been so much nicer!
D

I finally got this set from HTS today. I agree that Exar Kun looks old, and shouldn't be so restrained by the Mace Windu-esque one-piece "skirt" but is otherwise ok. I really like Ulic, though. I'm glad both are SA.

On a side note, Hasbro took far too long to get to TOTJ. There'a an easy 7 or 8 characters I would love to see in plastic someday from this series. Nomi, Odan-Urr, Arca, Cay, Tott, Vodo, Sylvar, and especially Thon (Never happen, but I'd love to see it someday).
?

Sneak peek for you guys....this update is scheduled to post later this week. 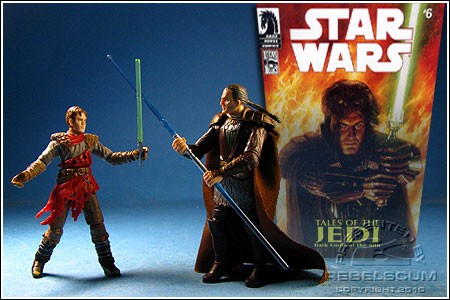 I got this set a few weeks back, but I haven't had time to photograph it until now.

Alright, some new photo's for the archive. Can't wait!
?

Yeah, it's been a busy year with sketch cards and shooting a TON of stuff for CTR....but nothing is as much fun as shooting Star Wars!


Mr Curto said:
Yeah, it's been a busy year with sketch cards and shooting a TON of stuff for CTR....but nothing is as much fun as shooting Star Wars!

If Dan Curto was a program in the Matrix, he'd be called "The Archivist"

Why is this set virtually impossible to come by?

Really wanted this too.


GrandAdmiralJSK said:
Why is this set virtually impossible to come by?

The last wave of everything is and always will be almost impossible to find. I got this set from HTS during a blink of an eye availability moment, it was just luck. They remained as out of stock for a while but about 3 weeks ago they removed all of the last 5 from the site.

never saw this in the wild but I did buy it twice. First time was in an entertainment earth case that I sold on the forums here. Second time from from a local scalper I mean comic shop for 20 bucks. I'm pretty sure they have guys that go out hunting for stuff the sell in their shop. I didn't really want to support them but it happened.


Vitus said:
never saw this in the wild but I did buy it twice. First time was in an entertainment earth case that I sold on the forums here. Second time from from a local scalper I mean comic shop for 20 bucks. I'm pretty sure they have guys that go out hunting for stuff the sell in their shop. I didn't really want to support them but it happened.
Click to expand...

Ya I am pretty sure I never saw it once. If I did it must not have dawned on me at the time. I went out of my hunting most of the other good packs last year and early this year with Cade, Lumiya, Krayt and others but I totally missed this one and I have almost all of the non-Marvel EU stuff.

*edit* 9/8/2010
Awesome. A fellow scummer has helped me find this which was my most-wanted comic pack. Very happy that I can finally check this one off.

I can't believe the silly prices this pack us selling for on ebay. I think this and the T'raa Saa pack are destined to be a permanent hole in my collection

I thought I'd stumble across it eventually, but never a single sighting.

tell me about it I'd like to get a couple more Master Tholme figures for customs.


JTKenobi said:
I can't believe the silly prices this pack us selling for on ebay. I think this and the T'raa Saa pack are destined to be a permanent hole in my collection

I thought I'd stumble across it eventually, but never a single sighting.
Click to expand...

It is a really cool pack as well. Both of them in fact. I owe Mynock09 big time for helping me out. My wanted packs are almost complete now, only want the Imp Knights and Luke and Mara. Maybe Faie and Vos.