mandalorehunter said:
From what I can see, it looks like a good set. Wasn't expecting the orange clones or the Blackhole Stormtrooper set. What is the blackhole stormtrooper hologram supposed to be? I guess what I'm asking is what's the significance behind it that justify's making it into a figurel.
Click to expand...

ahh, now i get it. shadowspawn appears as a hologram most of the time, so that's why they made it into a figure. i really hope we get a shadowspawn in human form sometime in the future. exar kun is looking really good!


mandalorehunter said:
From what I can see, it looks like a good set. Wasn't expecting the orange clones or the Blackhole Stormtrooper set. What is the blackhole stormtrooper hologram supposed to be? I guess what I'm asking is what's the significance behind it that justify's making it into a figurel.
Click to expand...

ahh, now i get it. shadowspawn appears as a hologram most of the time, so that's why they made it into a figure. i really hope we get a shadowspawn in human form sometime in the future. exar kun is looking really good!
T


mandalorehunter said:
ahh, now i get it. shadowspawn appears as a hologram most of the time, so that's why they made it into a figure. i really hope we get a shadowspawn in human form sometime in the future. exar kun is looking really good!
Click to expand...

Blackhole appears as a hologram in those early stories... Shadowspawn is a few years later.

I'm definitely all over this set! Exar Kun looks like he may be a little stiff and bulky, but I could care less. It's Exar Freakin' Kun!!

Looks like the TOTJ era figures are starting to grow. With the Mandolore figure and now Ulic and Exar. Now if only we can get Nomi Sunrider, Cay Qel Droma ,Tott Doneeta, Thon, & many others to flesh out this era.
D

I will get these but to be honest I'm a little disappointed. After waiting 6 months from getting the rumor, it looks alittle cartoony for a better word. Not the best but like everybody has said, at least we are getting them.
J

Everytime I see a fig from totj or kotor, I feel like Hasbro actually hears my prayers.

These look pretty impressive to me.

Right on Hasbro, my most anticapated pack and you nailed it.

These 2 look pretty awesome, I like the "Knight" look on that one, I will pick it up.
O

Whoa, a Comic Pack that interests me? No way. Gotta get it!
V

I am very excited about this, and will absolutely be buying it, but does Ulic remind anyone else of William H Macy?
R

After all the time that this set's been on the rumour list, it's hard to meet up our expectations. Exar Kun, for one, just looks off to me. Maybe it's the massive hands, or the headsculpt that makes him look twenty years older than he's depicted. And there's the chance that he'll look better deprived of that awful cloth cape.
N

The double bladed lightsaber is very lame. That doesn't really look like Ulic to me either.

And it looks like Exar got the Baron Fel treatment...it's almost like they used the same basic head sculpt!!
T

They look pretty good to me (but I thought Exar's saber hilt was smaller than that...I could be wrong, though). I'm also looking forward to the Routine Valor pack (a bit cheap, but I never got the Routine Valor comic).
C


vikingrobot said:
I am very excited about this, and will absolutely be buying it, but does Ulic remind anyone else of William H Macy?
Click to expand...

That was my first thought. A young William H. Macy.

Love the look of these guys, can't wait to get them!

Something doesn't look right to me either. The shapes of the faces just look off to me, as well as a few other things. If I can find this set I will get it, since I can always use more Sith and Jedi/Fallen Jedi.

Gonna pass on this one. A great pack but so many other things to buy first.
Z 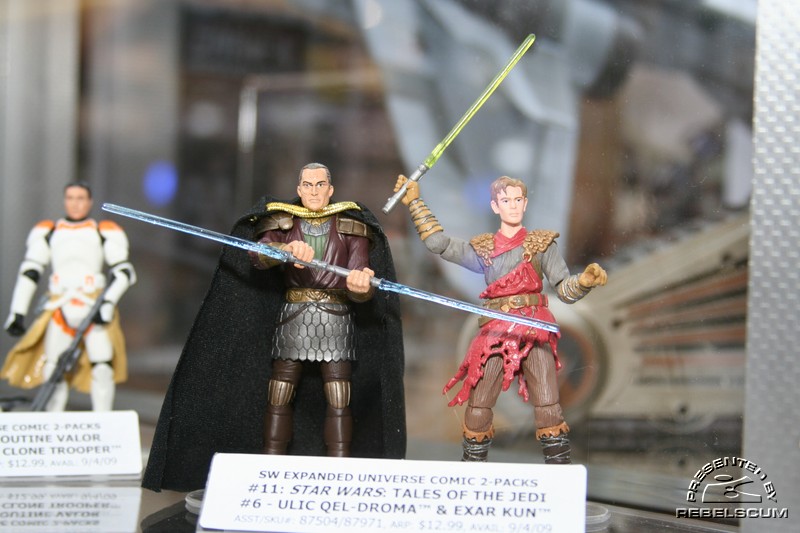 Exar looks much better when the cape is tucked under his shoulder plates.

I'm a little disappointed with these two, especially after waiting so long to see them done. The excessively torn outfit is a bit much and what the heck is up with Exar's huge head, hands, and feet?? He looks like a super-hero figure from the 90's.

I'll still get it, Exar I think is fixable.

This is what I have been waiting to see and I have to say I as really disapointed. When did Exar become middle aged? Exar looks way to old and Ulic looks to much like William H. Macy.

I hope that the cape does come under the shoulder armor like in the presentation photo and not like the one on display. That might make Exar salvable.

What is the deal with Ulic's torn garments? I think that they should have used another version of him. Especially that head!!!

Ulic's look I can at least understand - like a number of EU characters, Hasbro is evidently using the New Essential Guide to Characters (See also: Jaina Solo) for visual reference. That doesn't explain Exar Kun, though. Even though he's said to be young, in Hasbro's defense he's shown as having gray hair in the comics, which doesn't help his look.
J

I still think these look good, if not perfect. I'm less concerned with Exar's large extremities (err...) than with his little skirt thing. I don't like that. I agree that the cape looks better below the shoulder pads, but it's truer to the comic if positioned above them. As for Ulic, I think the shredded skirt is okay, as someone said Hasbro was *clearly* using the New Essential Guide to Characters for reference.

this is a must have for me........should have been in the 1st series of comic packs

The faces on both figures are meh too me but I've been wanting an Exar figure for years so this is still an easy must buy for me. Also is is just me of does the hilt on Exar's lightsaber seem a tad long?
J

The hilt is indeed long, which I was afraid would happen. AT LEAST Hasbro didn't just use a Maul lightsaber, which would have been far worse. Exar's double-bladed lightsaber was interesting in that its hilt was about the same length as a standard lightsaber.

Are you guys really surprised that the hilt is longer than it should be? My guess is they wanted it big enough so that both hand would go on it, so the regular size hilt would look awkward in the eyes I bet. I am disappointed by not surprised.
T

Agreed... nearly every figure looks awkward in a 2-handed regular lightsaber pose. And pretty much all the figures that DO look good in such a pose only have that ONE 2-handed pose; shift things too much, elbows pop out, hands pop off, or the saber just pops outta one hand.

But with a longer hilt, that increases pose options. And it does make sense for the weapon, too. In the comic, it was an awesome surprise to have Exar bust out a 2nd blade, very unexpected... but a regular-hilt with a blade at either end is rather impractical (far more so than the basic concept of a double-bladed saber to begin with!)

These guys look great. I'm glad to see that Ulic is in the costume to which I associate him with most.
S

All I can say is FINALLY. These guys have been rumored for so long and we finally get them. Exar Kun is one of the best sith lords of the EU and Ulic's story is excellent as well. Very excited must-buy for me.
H

Really enjoyed Tales of the Jedi, can't wait for this pack.
H

I'm just gonna have to wait for this packing.

The correct and real costume and look I associated with Kun is found on that particular comic book cover.

These figures are a major disappointment and let down, but as someone above stated, perhaps fixable. I will use a Darth Vader body to correct Kun.

BTW, where the *** is his forehead tattoo?