Well after going through some making of videos, etc. I have a new ewok to add although he kinda adds to an already complicted group of ewoks the Tokkat, Leektar, Flitchee, Oochee, Wunka complex. He's another drummer at the party (though playing kinda unconventionally) he's got the teeth and wide nose of Tokkat and Wunka but with a completely different hood from any of the afore mentioned ewoks.

though it does look like Wunka's hood without the feathers, it's obviously not

could this be the guy(girl?) who Chewie dances with at the party? Sure looks like him/her.

Here's a great shot of the other skull hooded ewok

Smokey from behind hugging Han (and Teebo feeling up Leia)

Widdle dropping in the AT-ST

and this is from the first attack on the stormtroopers just to show you how many ewoks there were we don't get to see, in the movie we only get to see about 4 ewoks jump off the log (see smiley there in the back) but as you can see there are also 3 who swing in and more who come from the side, this bts video is hilarious as you can hear the director yelling instructions like "beat the **** out of them" :grin:

kk1 said:
Here's a great shot of the other skull hooded ewok

Wow, thats a great picture of that Ewok. I would love to see Hasbro do this one.

And here's the ewok behind Romba in the Chewie picture, it's the same as the Topps sticker but much higher resolution

kk1 said:
Here is a good shot of Patchy (and Rabin) who only has that one small shot behind C-3PO (this was from a video called When Star Wars Ruled the World)

kk1 said:
And here's the ewok behind Romba in the Chewie picture, it's the same as the Topps sticker but much higher resolution

Got some new bts scenes shots and I think I can put this guy at the capture of the rebels too. See the same crease in his hood.

Here he is with the actor putting on the mask

and this is where he is in the scene, it's difficult to make him out but you can see him when he's bowing to 3PO

One little update while trying to figue out the identity of the striped ewok whose face I can't quite make out with the hunters I realized I misidentified one and actually had a good shot of him the whole time so to clear up the confusion I made this little collage of all the black and gray striped ewoks of which there are 10, 7 who capture the rebels and are in the battle and 3 who only appear in the village.

The 3 on the bottom right are the ones from the village (sorry for the small image of the left one that's the ewok who carries the rebels' weapons in a basket).
The first two on the top row were the ones causing the confusion and who I mistakenly identified as the same ewok, Graak. Just from those pictures you can see the differences, different hoods (though that's not as easy to see, the left ones is gray the right one is brown and different dangling string and feathers) different noses (wide and pointy vs narrow and snub) and their fur coloring notice the one on the left has a gray beard and the one on the right a black beard.

Finally figured out where they all are in this pic

Then Nanta, notice the wide nose and teeth, at least it looks like Nanta's hood compared to Graak's. I could be wrong but I don't see the feathers or light tie string like he has in the fuller shot in the collage.

The shot that made me realize I missed someone was this one, that's obviously tiny Nanta on the left (black string tie on his hood) and the striped ewok with the club in the Chewie picture (3rd top row in collage, low ears tie string between his ears)on the right but the center one couldn't be the Graak with his gray hood or the one with the long hood (bottom left collage) so I figured I missed someone and I did, sorry for the confusion.

I think that may let me finally ID every ewok in that pic where the rebels are captured though at least 9 still need names.
Last edited: Feb 21, 2013

The "grey Graak" is the ewok that Decipher misidentified as Lumat in their card game.
B

Can't wait to open this omorrow for Easter!

Our Ewok army has now grown to a respectable size!

bobbyjack said:
Our Ewok army has now grown to a respectable size!
Looking forward to the new Kmart 2 pack later this year!
Click to expand...

15 more and you can fill out some scenes nicely
D

I really hate that new Teebo.

I really wanted to like Teebo, but the unsightly slit across the belly just ruins it for me.

PizzatheHut said:
I really wanted to like Teebo, but the unsightly slit across the belly just ruins it for me.
Click to expand...

I love the new Teebo, but I totally agree about that joint. They should totally do away with it for Ewoks ala Wicket, its just far to obtrusive.
D

Him looking nothing like Teebo and having an awful paint job does it for me.
J

darthsatan said:
Him looking nothing like Teebo and having an awful paint job does it for me.
Click to expand...

I use him as a background ewok.

This set was one of the coolest SW collectibles to come out last year. Hopefully Hasbro will release another ewok pack again to add to the mix.
D

Jay_the_Lesser said:
I use him as a background ewok.
Click to expand...

Me too. It's impossible to think of it as anything else.

It's really only noticeable on the striped Ewoks.
If they change it to a BH joint similar to what chewy got, or at least something a little more hidden would be nice.
But totally getting rid of it might be going in the wrong direction.
D

Masterfett said:
But totally getting rid of it might be going in the wrong direction.
Click to expand...

New Legends/ Mission series says it's way too late for that!

Can somebody throw me a link to where these guys are in the Rebelscum Photo Archive? I can't seem to find the page...

This was never added to the archives. If it ever is it will be under "Movie Heroes - Battle Packs & Other Multi Packs".

SnTrooper said:
This was never added to the archives. If it ever is it will be under "Movie Heroes - Battle Packs & Other Multi Packs".
Click to expand...

Yeah, I just found the listing but no link. It's confusing because it's not in a vintage package but fits in with the vintage line... Anyway, thanks for the confirmation.
K

kk1 said:
And these 2 guys with the really distinct faces, one with a pretty prominent widow's peak and the other one that reminds me of a snub nosed monkey

In the village is the only place I see these guys.

Small update on this guy, until now just had a small blurry screen capture to show this guy might be at the final battle too.

we also finally get a good shot of the puffy haired ewok behind Nho'Apakk in the other picture of Lucas (behind his right elbow). Though I still cant find him in the movie.

You know with the new Ewok 2-pk that previously featured the Dalmatian looking one getting pulled. I has me thinking maybe they could do one more BP, with Chukha-Trok, Cindel Towani, Dalmatian, Latara, and Noa.

I like the TRU Exclusive Ewok 5 Pack but they do need to get rid of the swivel waists. Ewoks do not need swivel waists... looks like they were in a magic show gone wrong. 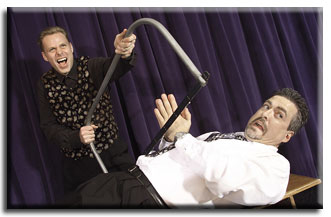 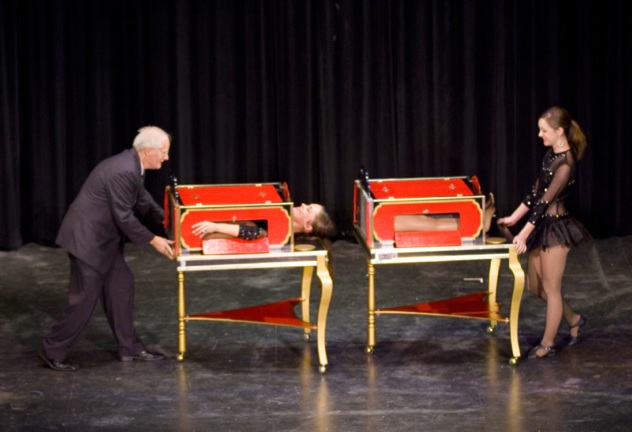 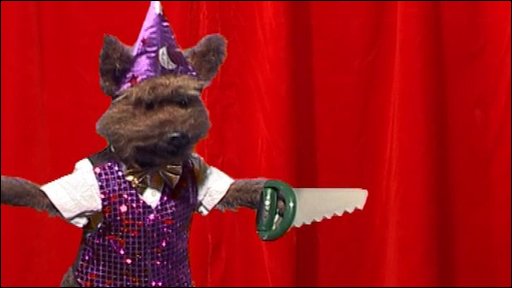 Idpullthecurtain said:
He looks bad-***. He's not from the movies right?
Click to expand...

Right just patches of fur in the movie.

He's apparently from a neighboring village. Though he does look Bad*****, I have to wonder how good of aim he could really be with his depth perception gone.:grin:
K

kk1 said:
Well after 8 pages I'm down to possibly my last ewok, I'm pretty sure these 2 gray ewoks are the same as their hoods look to be the same, very long and hanging. The first is the hornblower and the next is the one who pulls the peg to let the logs roll down the hill. 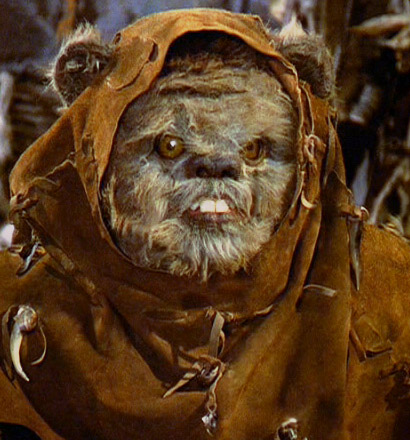 Of course then I noticed Deej is just wearing Chief Chirpa's hood without the headdress (the horns and leaves), looks like the same tooth on his right shoulder on the ewok at the logs and you can definately see the drawsting around the neck of the hornblower. So IS it the same? Probably never be able to tell but that's an easy enough custom figure for anyone so inclined to make one.

He also reminds me of one of the archers I made a screen cap of vrom a BTS documentary I couldn't really identify because of the low resolution.

On the logs screencap it looks like he has a little white goatee beard.
K

Internets said:
On the logs screencap it looks like he has a little white goatee beard.
Click to expand...

decided to get some screencaps off of Battle for Endor too today. Wish I had done this sooner, never realized how many costumes they reuse.

Get lots of great shots of the ewok that "yells" at Han the one with the white beard and missing teeth.

And we get confirmation the other "bearded" Ewok we see in the village is a completely different one. (also notice his crutches)

which also lets me finally ID this ewok

The beards looked different but I could never confirm it without a closeup.

Oh that's just great, now we need an Ewok with a beard!
K

Cool new shot of the masks, thought I posted the other view too but I guess I didn't. Now you can play "Spot the Ewok" notice there are 2 spotted masks on the top shelf. I'll start, the bearded one from my last post is on the bottom shelf.

^^^
That is so disturbing. Like seeing the character costumes hanging on racks in the tunnels under Disney World.

On a whim I searched "ewok" on the Kmart website, and lo and behold The Ewok Assault Catapult is listed but not in stock; It says "Temporarily Unavailable" under shipping and "This item is currently unavailable for store pickup." I assume this means it'll be coming soon.

The price is listed as $20.99, and the description names the Ewoks as "Chubbray and Stemzee."

The Imperial Scanning Crew 2-packs are on there too, but those aren't available yet either.

Oops - wrong thread; this one came up first when I searched "Ewok Catapult." I've reposted a shorter version on the Catapult thread over in Vintage Collection...
You must log in or register to reply here.
Share:
Facebook Twitter Pinterest Email Link
Top