Location
The State of Rhode Island and Providence Plantatio

Could have been worse. At least we didn't get this:

Put a guitar in his hands and that is one awesome figure.
T

well I got a bit of bad news for ya on that front I don't think they do nor does the assault walker. if you check out the packaging there is no force awakens subtitle under the SW logo. any figures and vehicles that appear in the film so far have this mini subtitle. hence why figures like Boba fett luke and any other otc figures have just plain SW logos

Good thing I returned this flimsy overpriced hunk of crap too. I love my Rockstar Biker Scout
T

Well, I just picked this up this morning at Target. I like it overall, but it has issues. I've already got a major stress mark on one of the back engine flaps. As with this whole line so far, it's a mixed bag. I'm not disappointed but also not thrilled.

So, I'm a sucker for Speeder Bikes. I finally bit the bullet and got one. I honestly really like the vehicle. I don't like the price and feel that it really should be in the $14.99 price point, but that's just me.

Not looking at cost, I really like it. The front gun actually pivots up and down. I looked at several Youtube reviews to try to justify getting it. I honestly wish these people would actually open the toy and play with it for a little and get to know it before reviewing it.

I actually didn't know the foot pedals are on a ratcheting style joint so it can sit in different pre-determined positions. They might have mentioned it, but if they did, then I didn't notice.

The other thing was all the reviews I saw complained that the rear flaps don't flip up and they actually had to pull them off and re-position them in the opened position. That is not true, I was able to open and close the rear flaps just but flipping em up like I did with the TRU Speeder Bike that this was built off of. As for it falling apart, it does out of the box, but you just have to press it together and then it's really sturdy. Like I said, those people doing reviews really should spend some time with the toy before going to review. My impression from them was that it's a really crappy POS that you basically have to compromise to like.

Anyways, like I said, I have it and love it. Don't like that it was $25 (CDN) but I just couldn't wait any longer and decided to get it. TRU had them on sale last week, but they didn't restock till this week and this week, they have the 6" figures on sale but have no stock. They only have 3 3/4 stuff that they didn't have last week. So annoying...put the thing they don't have in stock on sale and restock after the sale.

The only thing in my opinion that would have made this even better was an SA Stormtrooper with it as oppoed to the 7 POA figure that came with it.
N

As mentioned above, I love Speeder Bikes so when the FO Speeder Bike was revealed, I was really happy. Only wish the trooper had more articulation.

I took my leftover parts from my General Weir and put some of the Elite Stormtrooper stuff on him. Now I have an SA Trooper to ride my FO Speeder Bike.

Sorry the lighting isn't too good in the pics

Well, in all honesty, if you look at Hasbro's offerings (especially G.I.Joe figures), their paint matching sucks. Also, like I mentioned, the lighting is bad so the flash will always highlight non matching paint. To me, I'm cool with the helmet differences in color cause for me, black is black.

Location
The State of Rhode Island and Providence Plantatio

In defense, the helmet matches to the jump suit material under the armor, which has a glossier black look to it.

That custom pilot is so much better than the official release! The scout armor components make this guy look so much more believeable as a bike rider, especially the cloth pants and cod piece.
N

Thanks guys. I found my Speeder Bike stand too so now I can display it with that.

Just for those wondering, based on the youtube videos I saw, it seems that the reviewers think the rear flaps don't open and close and you have to actually pop them up and reposition them, they actually flip up and down just like the previous speeder bike so don't know what they were talking about and why theirs couldn't do it. Here's some pictures to show that.
Fully opened:

Al cheapo Hasbro should have included a fricken stand with the bike IMO.
N

Falcon_Gunner said:
Al cheapo Hasbro should have included a fricken stand with the bike IMO.
Click to expand...

Couldn't agree more. It's not like it wouldn't have fit in the box.
N

Nighthawk said:
Thanks guys. I found my Speeder Bike stand too so now I can display it with that.

With the 3 3/4" SA stuff being relegated to a Walmart Exclusive. I'm not too sure if I want to keep collecting 3 3/4" stuff anymore. Would anyone be interested in trading for my custom? You'd get everything in the picture except the stand. I'm thinking of only collecting 6" stuff so I'd trade it for any 6" figure I need or just sell it for $24.99. If anyone's interested let me know. I'd rather it go to someone here that would appreciate it. The hands are a little loose though as the holes were drilled out to go on another custom before and I basically had to shim it to put it back on this body.
N

Check my B/S/T thread to see what 6" figures I'm looking for.
O

So, I decided in the end to keep this. I may throw it up on Ebay for $50 and if someone wants it that badly, they can have it...haha.

Anyways, the thing I didn't like about my original custom was the way I mounted the thigh holster. It stuck out too far and the pistol was prone to falling off easily.

I finally decided that if I'm gonna mod, I'll go all the way, so I cut off the holster from the actual Elite Stormtrooper's leg and cut up my General Weir's leg a little and bascially modded the holster onto it. Now I'm actually really happy with him and he's now my FO Elite Scout Trooper. The strap on the leg works perfectly as it makes it look like the holster part is strapped on with the strap as the actual FO Stormtroopers have armor there with the holster being part of the armor.

Close up of the holster

Him on his bike

I think the next step is to modify the TRU exclusive Speeder Bike stand that I use for this so it's not so high.

I actually haven't picked this one up yet. Really need to. I feel like it'll be really cool.
N

Honestly thought it was overpriced but I knew if there was only one 3 3/4 vehicle I had to get, it was this one cause I liked Speeder Bikes and I already visualized making that Elite Scout Trooper already before getting it.

I mean, all the vehicles are overpriced this time around. This one is worth about $15, but for $20 I don't think it's that bad of a deal.

Yeah, I paid $26.99 CDN for this. When I got my TRU exclusive Speeder Bike with Biker Scout, it came with a stand and a nice cardboard background for $19.99 CDN. That is what I feel the price of this Elite Speeder should have been.

Nighthawk said:
Yeah, I paid $26.99 CDN for this. When I got my TRU exclusive Speeder Bike with Biker Scout, it came with a stand and a nice cardboard background for $19.99 CDN. That is what I feel the price of this Elite Speeder should have been.
Click to expand...

I may have to track down a Speeder Bike stand for when I finally pick this one up. I want to display it, but not if it's just sitting on my shelf. Needs to be raised a little.
It's why I'm hanging my X-Wings.
N

Finally cut up the Speeder Bike stand. Now my Speeder can be displayed nicely without it floating up too high. The display stand was just cut and glued so it doesn't look that nice, but hey, it's clear and it does it's job.

Just for fun, with a Stormtrooper posed in front of it.

In the film this thing is so black you can't even see it.

darthsatan said:
In the film this thing is so black you can't even see it.
Click to expand...

Darn! I shouldn't have bought this thing then. It's not screen accurate cause I can see it! I couldn't have just not bought it and said it's on my shelf but you just can't see it.
A

Was going through my TFA display to fix some stuff up and found this at the back. Forgot about this. Wish these guys made it to the movie. This was a custom I did to make the rider super articulated.
The base is a black Biker Scout with FO Elite Stormtroopers modded onto it. 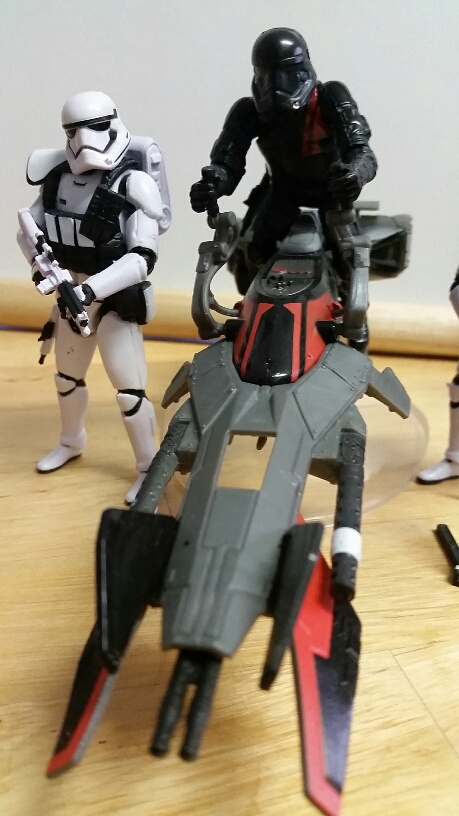 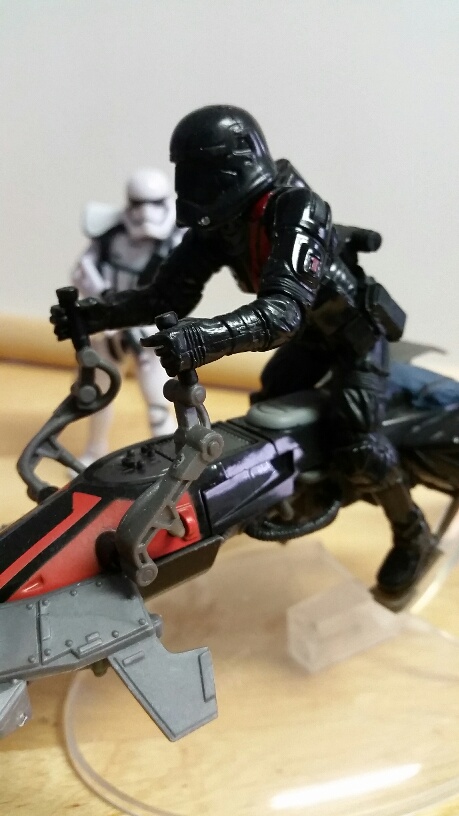 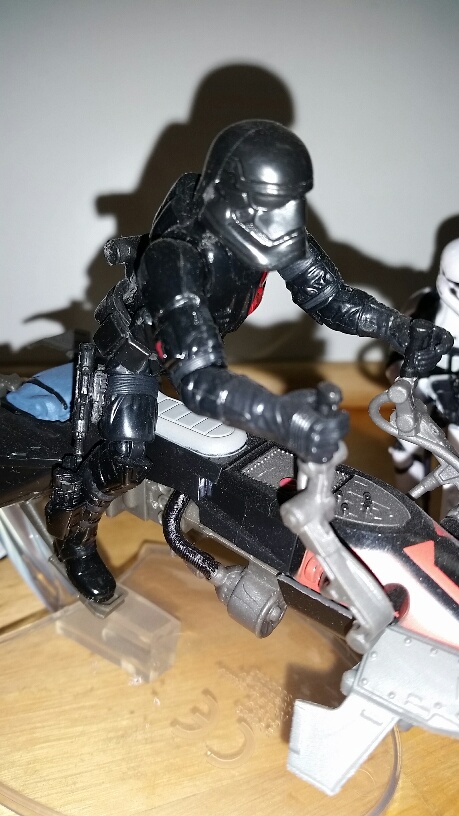 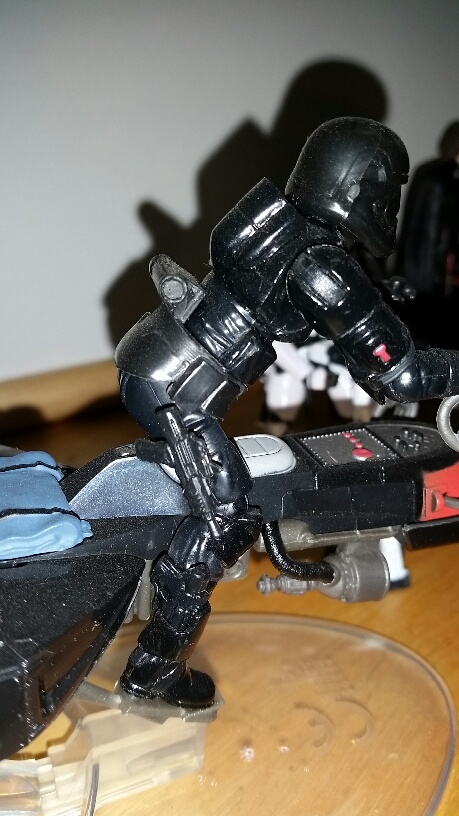 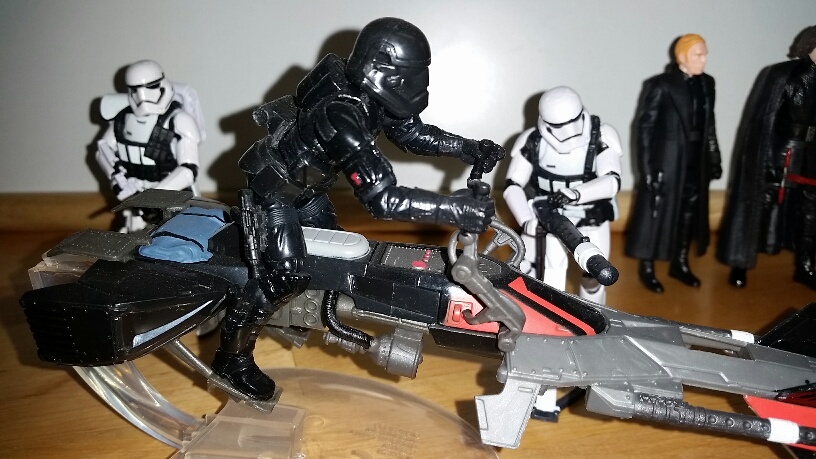 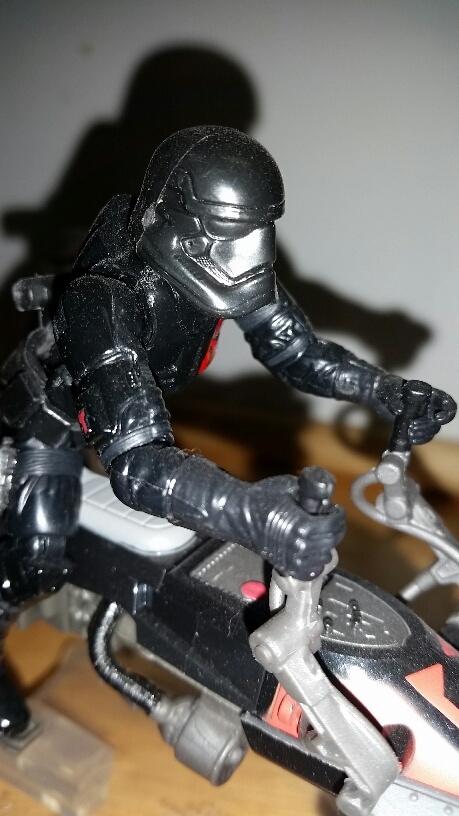 The 2 TRU stores near me got in a ton of these as well as the other vehicles in this case assortment. With 30% off they are $14. I guess just another symptom of why they are going out of business. They should have clearanced this stuff out 2 years ago.
You must log in or register to reply here.
Share:
Facebook Twitter Pinterest Email Link
Top