The Maul sculpt does look pretty good, but what really surprised me is that the outfits on Maul & Ben look great. Han just looks like junk though. Definite pass on all.

I'm still going with the, wait and see theory. I've seen it too many times, we all have our minds made up and the figures end up pretty cool. Yeah, I'm not crazy about the Han/Hoth but the Maul looks pretty cool(One of the better facial representations I've seen).

But the inclusion of 'chase' figures on something like this?

You know, after seeing these at SDCC, these are giant action figures. They should NOT be compared to the SS Premium Format line.


JimCorrigan said:
You know, after seeing these at SDCC, these are giant action figures. They should NOT be compared to the SS Premium Format line.

Because the SSC is a much higher quality by direct comparison. Bigger doesn’t necessarily translate into better.

Here are a couple of the images I took at SDCC 2008 of the Diamond figures of Obi-Wan ANH and Han ESB. I wasn’t overly impressed with what I saw so I didn’t spend much time with them. 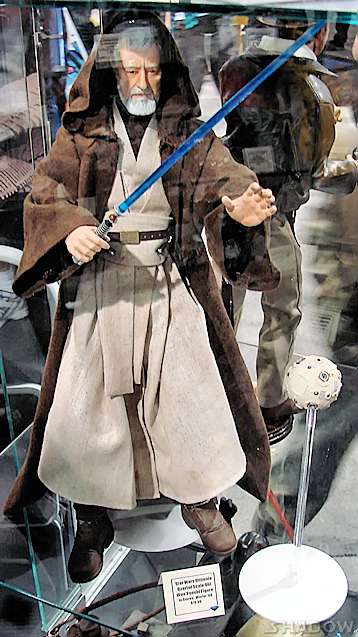 Here is a close-up of the saber they have Ben posed with. I’m sure this is just ignorance on the part of whoever put him up in the display case; that hopefully he ships with the correct saber. 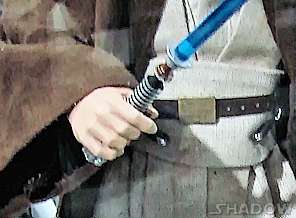 Thanks for the pics, Shadow. I have to say, those figures look remarkably underwhelming. I'm going to have to pass.
G

These are BIG and ridiculous, and I'm all in!! For $75 I say that Obi-Wan sculpt is dead-on accurate.

Problem is, where are you gonna put these monsters? It would be great if they came on giant over-sized cards with huge blisters. Then we could get them AFA graded in GINORMOUS plexi-glass cases that were seriously, like, 6 feet tall!

Hahahaha... that is funny.

As a children's "high end toy", maybe these work, but definitely not for the serious collector.
Click to expand...

that prototype is very old and you should check out the new pictures on artasylum.com if you want your mind to be changed about the whole line, you can't go by the early stage pictures.
M

Im interested to see at least the Maul in the flesh, so to speak. If he is comparable to say, NECA's 18" lines i'll try and pick him up.

Art Asylum's latest blog also mentions they are looking into producing Vader and other armored characters.

are we sure han is not really leia. LOL

with that thin body and pose um...

Darth Maul is a really cool toy! Check out the teaser.... 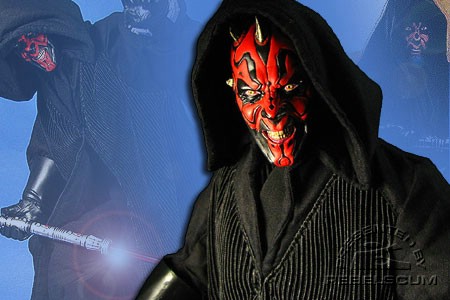 The outfit and paint on this one are more than enough to get your money's worth, I love him!

I've shut down the other thread, so please continue to discuss here in this one.

Anyway, here are a pair of new Darth Maul teaser pictures for your viewing pleasure: 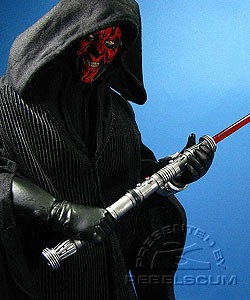 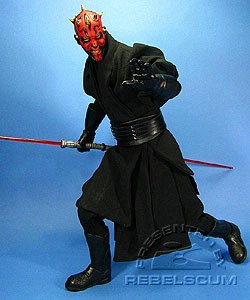 More to come....just let me know what you'd like to see!

i'd like to see a full body shot with cloak, and an extreme close up on his face and saber. thanks a lot!
? 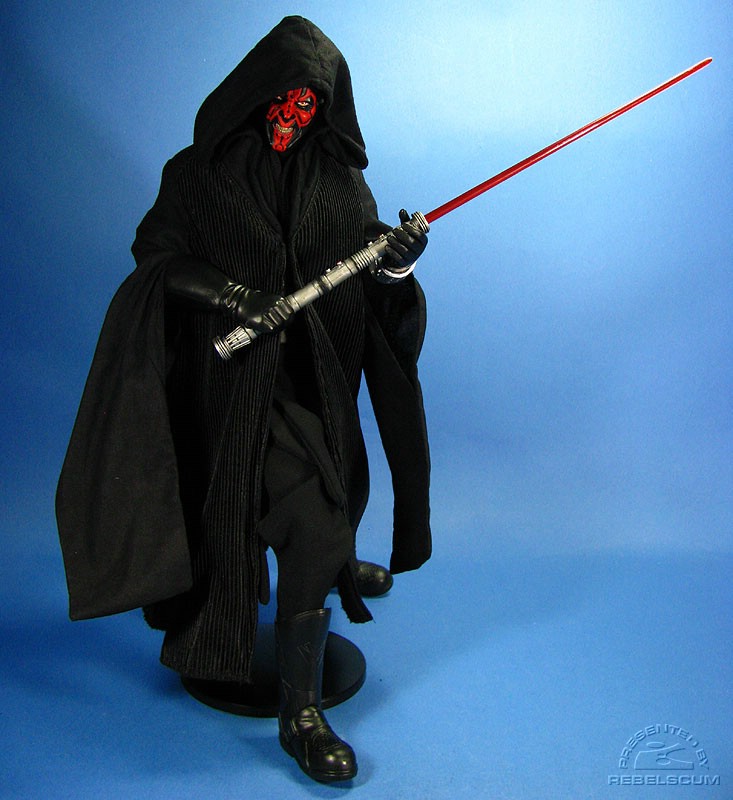 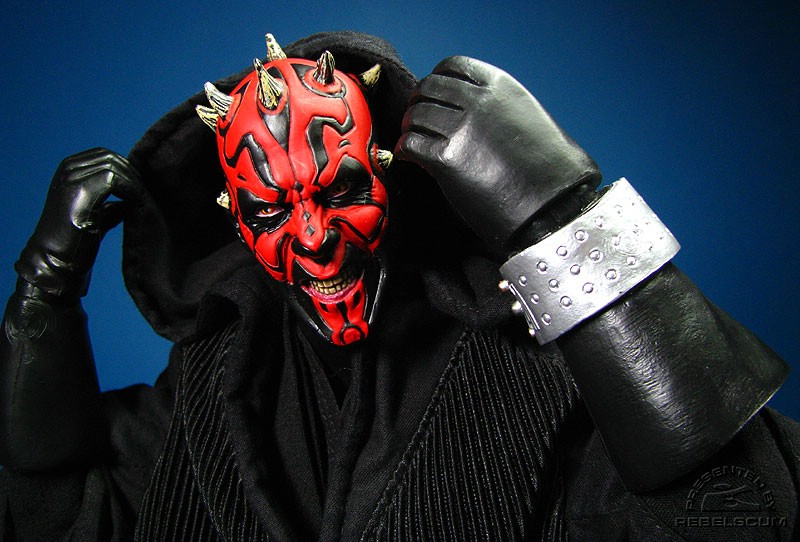 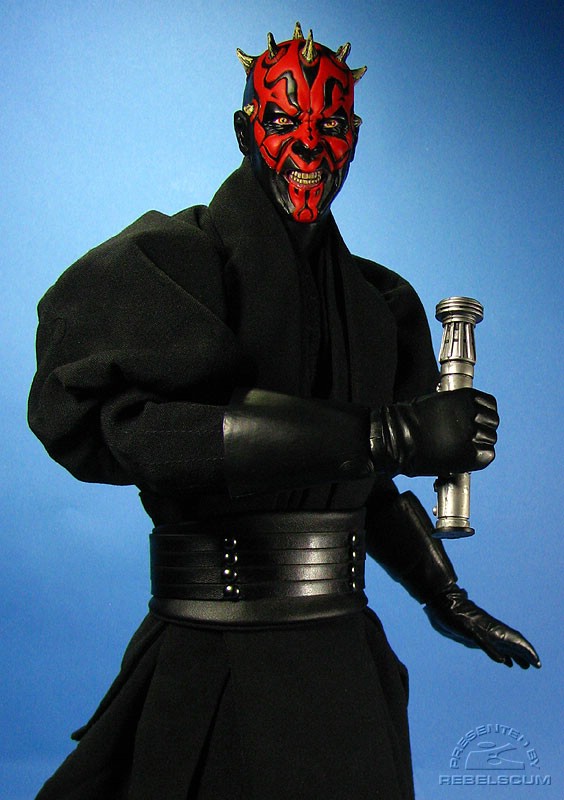 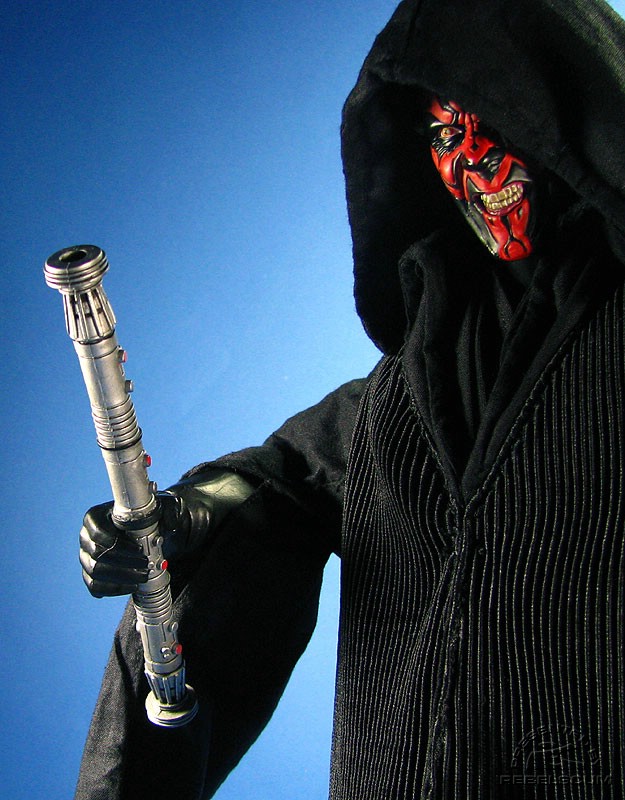 I added the extra shot of the lightsaber to show how it comes apart...the two halves are held together by small magnets in the hilts, and the blades can be inserted into each side.

This one is pretty impressive. I may have to seek this one out.

Nice photos Mr. Curto. How has the figure been? What would be your micro review?

I think the Mace and the ROTS Obi pics shown so far show great promise. Not so sure about the Alex Guinness likeness for the ANH Obi-Wan.

Also, disappointing news about the ANH Obi-Wan getting the ROTS saber.

I'm curious if/when they produce a Vader or Stormtooper


Mr Curto said:
I've shut down the other thread, so please continue to discuss here in this one.
Click to expand...

Could this possibly mean we're getting a 1/4 scale Anakin soon?

Either one would be a welcome addition and would surely create a hotbed of attention for the line. I agree with others that using the same saber for Obi-Wan is disappointing for accuracy sake

And I still feel that the boxes cheapen the line, especially the "tickle-me-Elmo" style hole in the front plastic so you can tickle their bellies

Ok, ok I know it is to play the sound clips but I would prefer the button and "tickle hole" had been in the back of the figure.

Mr Curto said:
I've shut down the other thread, so please continue to discuss here in this one.
Click to expand...

This one was more popular, so it wins out. 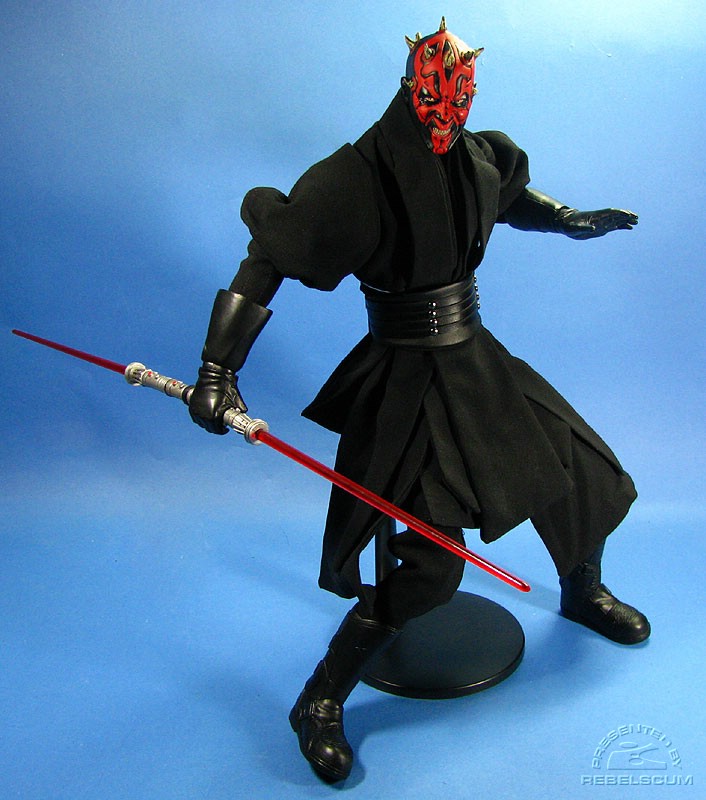 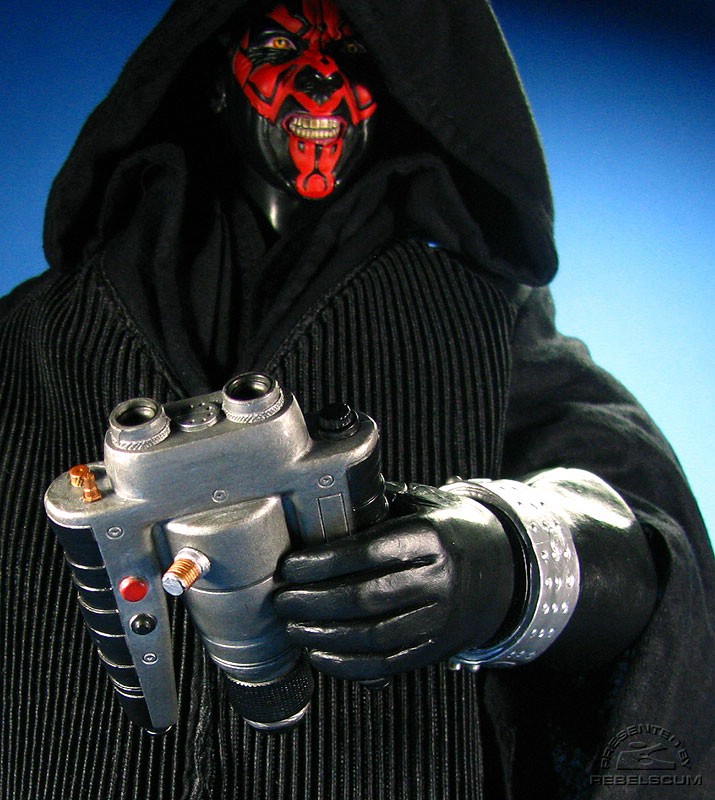 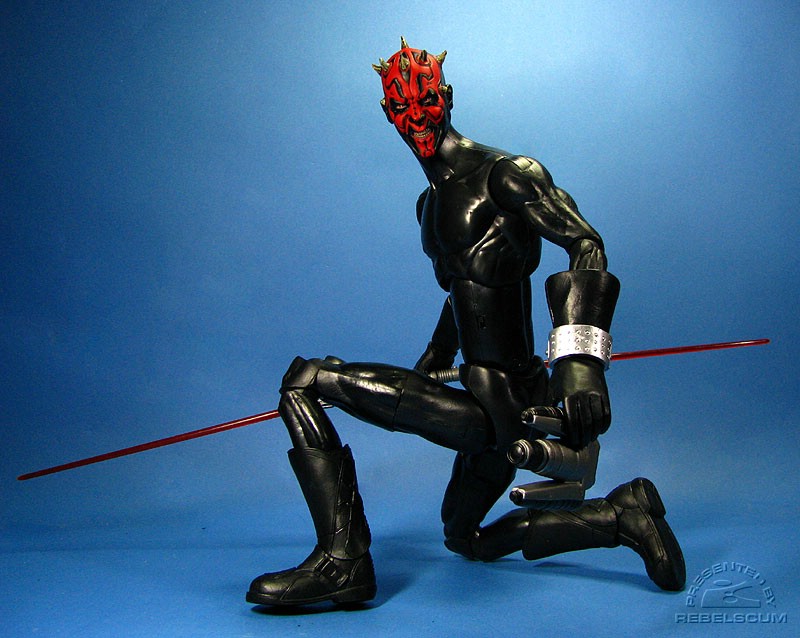 Promising if you wondered what Boy George would look like if he were Anakin Skywalker maybe.

Not liking that at all.
C

It actually looks A LOT like the head sculpt for the ROTS Anakin Evolution figure.


CODA said:
It actually looks A LOT like the head sculpt for the ROTS Anakin Evolution figure.
Click to expand...

Think Maul is still the only one i may pick up.
A

That paint job is awful.

As an aside...anyone know how far a sculpt can be 'pushed up'.

For example, if one had a Darren Carnell/Andy B. Anakin 1/6 could it be upped at all?
J 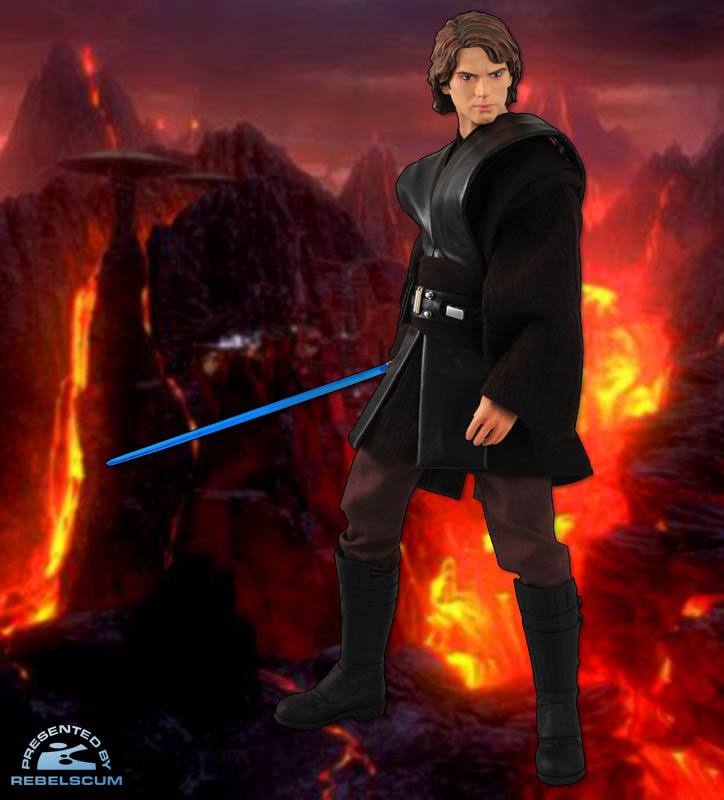 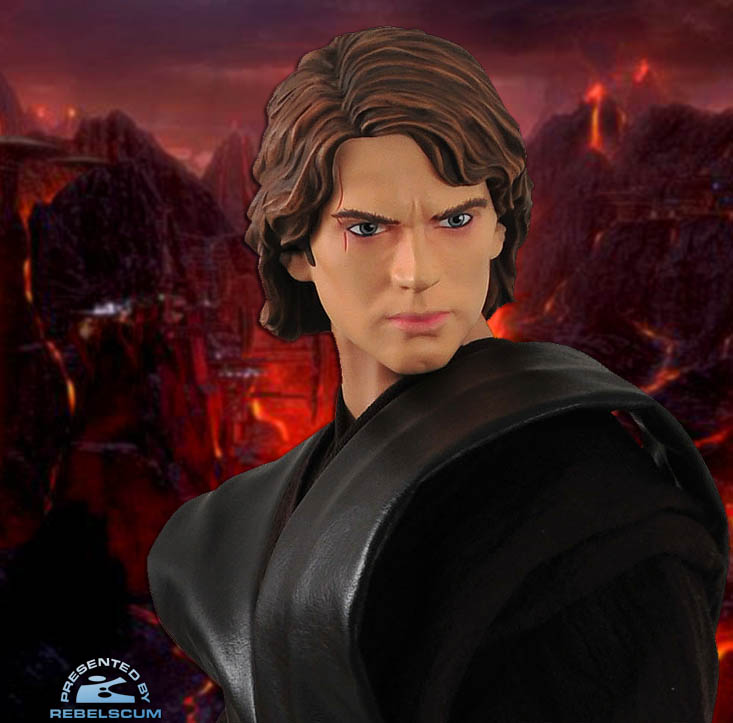 I gotta say, with a little bit of fuzzing and a repaint, this figure will look great.

The headsculpt is very good, no doubt about that.
The jawline is more accurate than SSC's 1/6 scale figure and the hair isn't a helmet, like the SSC's has.

The factory paintjob isn't great but it is definitely better than SSC first Anakin.

Also, some of the SSC figures look little like the actors that played them. The final production piece Han Solo and Luke look awful, IMO. The new SSC PF Anakin also looks pretty off to me.

The Diamond 1/4 scale is constantly under heavy fire.
In most cases undeservedly so. Yes, the body sculpts are a little weird, the first prototype of the Emperor looked awful, but Darth Maul, Mace Windu, Obi Wan and now Anakin all look really nice (with a little bit of fuzzing).
S


Tyrannusspotting said:
The Diamond 1/4 scale is constantly under heavy fire.
In most cases undeservedly so. Yes, the body sculpts are a little weird, the first prototype of the Emperor looked awful, but Darth Maul, Mace Windu, Obi Wan and now Anakin all look really nice (with a little bit of fuzzing).
Click to expand...

I couldn't agree more. The Darth Maul really looks awesome and I think I prefer the look of it to SSC's 1/6 [which I never truly liked as much] and I think this whole line will be really good. Hopefully they'll sort Palpatine out and if so, this could be a solid line.

In saying that I think the AA pictures aren't doing them justice as Curto's pictures showed off Maul a helluva lot better. The saber's are putting me off them but apart from that I really like these. Especially the Old-Ben.
A

Despite being a bit harsh on this one earlier - seeing the full thing has made me quite excited for this one. Some futzing needed but show me a figures that doesn't.

I'll be picking the Maul up too.
M

Agreed - seeing the head in context with the body gives a better representation. Although not coming with a robe is a bit of a downer.

I think im definately going to pick up the Maul, and then, possibly, Ani and Ep 3 Obi for a Mustafar duel.