Featuring original Kenner branding along with premium detail and design inspired by ROGUE ONE: A STAR WARS STORY, this collectible STAR WARS: THE VINTAGE COLLECTION 3.75-INCH DARTH VADER Figure makes a great gift for STAR WARS fans and collectors. Highly poseable with realistic detail, this figure can be displayed in action figure and vehicle collections. Includes figure and accessory.

Love that cardback! Got my order in

Looks fantastic carded. Always happy to add more RO to the collection. Here’s hoping Baze and Krennic aren’t too far out. I preordered the entire wave Vader comes in.

Hopefully branching out from the main R1 crew means some Imp officers, like Tarkin and Krennic, and rebels, like Blue Leader and Bail, have a shot.

I'm not sure about the mobility of the plastic robe, but this figure definitely looks good. 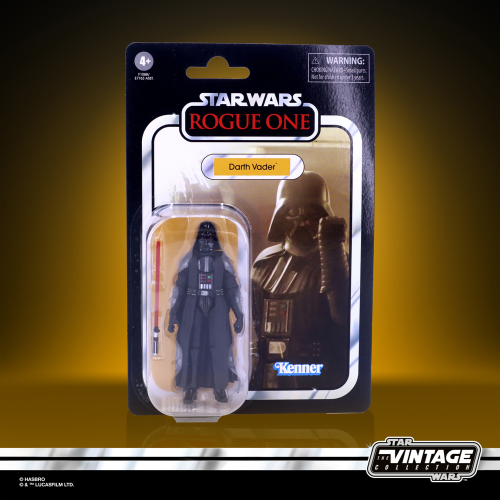 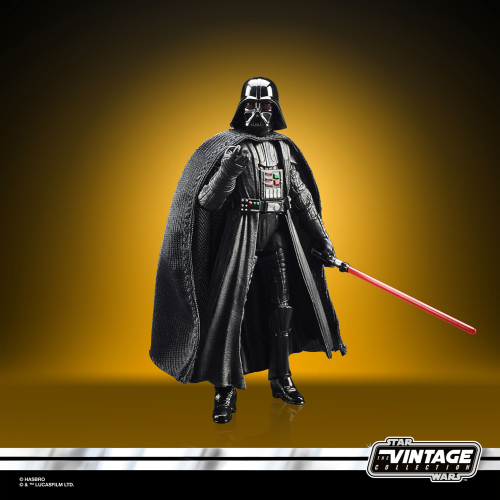 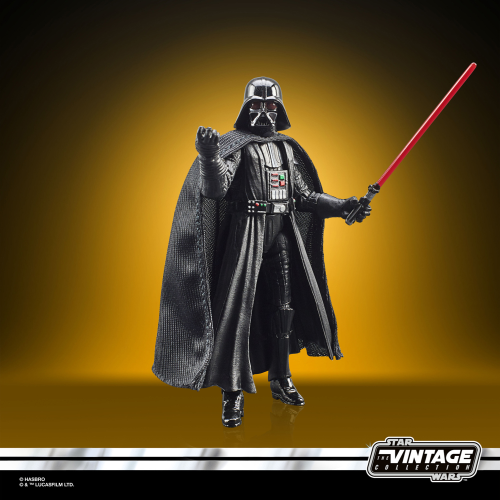 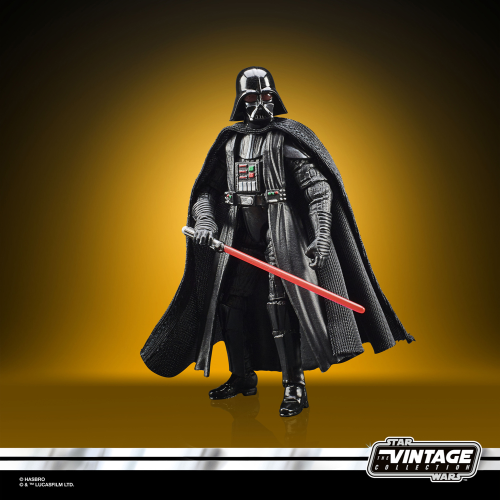 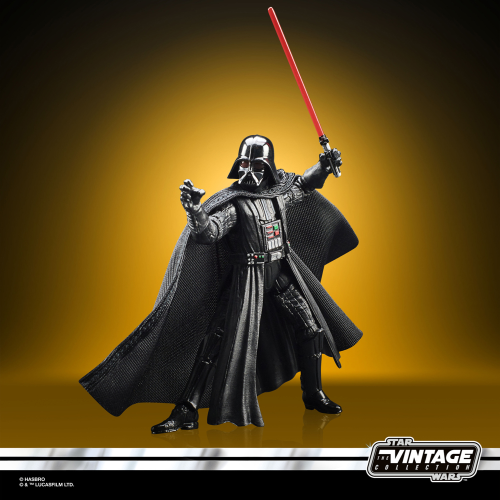 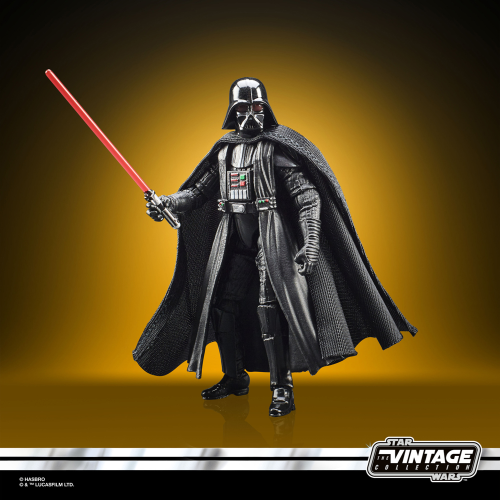 Finally, Darth Vader gets made into an action figure.

I like it mostly because of the Rogue One card, and normally I complain we don't need another Vader.

Still doesn't look like it will top TVC93 as THE Vader for me but it's definitely a nice looking figure. Got an order in.

Looks like the head, torso and skirt are the only new. Old arms and legs of the vc93. This looks hidously frankensteined. Not a good look.

Let's be real: it's all about that cardback!
J

I can't believe Hasbro cheaped out again with the accessories. The figure doesn't even come with an unlit lightsaber hilt. Also, I would have thought including an unclenched hand with this figure would have been cool for Hasbro to do.

Agh this is just the VC93 Vader with the head and plastic robe off of the force link 2.0 one.

the repaint looks nice but they missed a trick here. I’ve seen customisers in the forums do the same thing for a while now
D

His card back brings the to yard!

They really need to release the ROTS one on a vintage card, guess at least another year of waiting.
D

I preordered. The more I look at it, the more I’m indifferent, though. I really think the soft goods/plastic combo takes away from the visual appeal. The cape looks off. We’ve had two ANH Vader’s in the basic 5POA (Forcelink and RO) recently that people have loved. I’m surprised how this one came together. Something definitely seems off. I wonder if he’d look better with a soft plastic cape?

i heard about this before i saw the card back, i thought for sure the image they would use would be of Vader standing in the hallway, when he first ignites his saber. For me that moment rivals the first time he appeared on screen in a new hope, and scared the crap out of 7 year old me. The image they used is too bright because of the sparks, looks washed out. The figure looks pretty good tho. pass for me, i already own several Vaders.

VC93 is an amazing sculpt and will be hard to beat, but I'm looking forward to giving this one a go! Looks like a retool, but the head looks new.

IMO it's great that they keep improving on Vader (or at least attempting to). I want the best version of these main characters as possible. Keep it coming, Hasbro!

All I would say is... how on earth did they choose that photo for the cardiac over the red lightsaber in the dark and the smoke of the corridor? What a missed opportunity! Would have looked so much better! Minor complaint though, I'm not a MOC collector. Bring on the figure!

^ I guess this picture works better w/ the dark yellow name pill color. Which I also guess they wanted to keep same color for vader.
H

Yea, I agree, Rogue One was a cool movie, i like the various figures and vehicle we got so its fitting to this very cool card back for Mr V.
M

Happy to add this one to the collection. Sat out VC93 back in the day (have the VC 08 foil card and no nostalgic attachment to the original 12) but was hopeful ANH-era Vader would get alternate card art like VC115 had. The gamble pays off after 8 years! Here’s hoping ROTJ Fett gets the same treatment eventually.

Oh, Darth Vader was in Rogue One?

Chewbacca said:
Oh, Darth Vader was in Rogue One?
Click to expand...

Yes . It happened after the Movie did not test well before release so they went back and added a Darth Vader scene and New Hope Leia.

DarthMickeyMoose said:
Yes . It happened after the Movie did not test well before release so they went back and added a Darth Vader scene and New Hope Leia.
Click to expand...

I don't think this is completely true -- one prominent scene featuring our boy Darth was added to the final segment of the movie late in the game. There is another scene that features him which, I believe, was part of the story earlier in the process. The fact that two different people wear the Vader suit in the two scenes underscore that they came to be at different times.

As for the figure: he looks good. I'll probably grab him because he's Vader and I'm a sucker for Vader. But I'm not jumping on pre-orders yet since I already have more than a fair number of him.

Darth Vader was in the movie but there was originally no action sequence with him. In the reshoots it was added. Oh the little details.

DarthMickeyMoose said:
Darth Vader was in the movie but there was originally no action sequence with him. In the reshoots it was added. Oh the little details.
Click to expand...

In fairness all reports seem to indicate Rogue One underwent tons of reshoots. The shots of Vader from the trailer weren't in the movie.

The Vader scene at the end was a welcome addition.

Vader’s role in Rogue One was spectacular. Brought the villain back to the big screen in a huge way. I’m looking forward to this release.

DSIILuke said:
Vader’s role in Rogue One was spectacular. Brought the villain back to the big screen in a huge way. I’m looking forward to this release.
Click to expand...

Agreed. Vader had been portrayed as a pathetic and tragic character for years after ROTS in the various media that came out.

Rogue One reminded us all of the terrifying character that we all feared back during the OT.
L

MasterWaru said:
Looks the same as the previous Vintage Collection New Hope Darth Vader that has the diaper crotch
Click to expand...

this Darth Vader have the new articulation on his legs similar the the 6" Black series, and more accurate head/helmet, I'm pretty sure is the best Vader from ANH and Rouge One.

I love the Card, dont need another vader, but was sold on the card. Preordered at EE.

I'm joking, guys. BTW, the plastic tabbard is going to make it impossible to seat Lord Vader in his TIE.

Yeah, the helmet sculpt looks better on this version than the ANH figure, but the loss of mobility from tbe plastic robe makes me think this is basically a lateral move from that version.

LuxBonteri said:
this Darth Vader have the new articulation on his legs similar the the 6" Black series, and more accurate head/helmet, I'm pretty sure is the best Vader from ANH and Rouge One.
Click to expand...

According to the glamour shots that have been released this figure has the same leg set up as VC93 Vader. Not sure where you read or saw something different.

I'd keep mine in the Tantive playset and another one MIB.

Beautiful cardback. I'll get one to keep MOC, to continue my carded Rogue One sub-set.
L

HothHan said:
According to the glamour shots that have been released this figure has the same leg set up as VC93 Vader. Not sure where you read or saw something different.
Click to expand...

No disrespect intended, however if you amplify the picture you can see it have a cut/swivel on his tight and ball joint on his upper leg, obviously you have not seen the picture in amplify setting, all the new vintage line (minus the reissues) have the new articulation on the legs. NOT the same articulation as the VC93, sorry but you are wrong.

Is this"amplified" enough for you? It looks just like this set up from the VC93 figure. Also factor in that Hasbro said it's based on the existing A New Hope figure (VC93) with a new torso, helmet, lightsaber and robes...with no mention of the legs.

I guess we will wait and see, but I'm pretty sure is the new leg articulation.

Location
Hanging out in a room with shelves full of TVC

eh... i like the new Vader... especially the cardback... I'm not in love with it, my eye caught the headsculpt,... I prefer the old 2014#3/#26 RoTS 3.75 Black Series helm look. It widened the helm and brought down the hood down the back of the neck which makes his head movement suffer of course which iirc was what the costume did to the actor in ANH lol. It's a small nitpick i know but my eye always catches Vader's eye-lense width to his helm's brow-width ratio to see how well it scales to each other for the 1.5 lense widths per each side of his brow. It's just my OCD i know but thats my own issue. Otherwise it looks great and I hope the thigh swivel-cut articulation is there as some mentioned it may be.

Also the plastic inner robes eh... im torn they make it aesthetically great but practicality means he can't sit in a chair/fighter. I'm sure a re-release w/all soft goods is a way for Hasbro to double-dip.. and I'll buy it again then to.
You must log in or register to reply here.
Share:
Facebook Twitter Pinterest Email Link
Top