Now up for attendee pre-order on the Gentle Giant website. You must be logged in to see it.

Chris Wyman said:
Now up for attendee pre-order on the Gentle Giant website. You must be logged in to see it.

IMO, to much pink. I understand what it is for, but WOW Holy pink! Could use some black on that helmet.

OOOHH!! NOO!!! Vader candy. I know it's for a great cause but maybe if they'd just painted the base pink. Just because you can, doesn't mean you should.
Too much.
Too much.
S

It looks like someone poured a bottle of Pepto Bismol into the paint instead of the gloss black we are all accustomed to seeing....

I actually think it looks pretty cool. My wife needs something cool that is pink that will fit in with her hello kitty rooms.

I'm in as one who likes this. It's kitschy. Plus GG uses an old mold, the manufacturers get practice, GG gets a practice run for the helmet line and they meet their charity goal. I'm in for one. I will proudly diplay it and bring it out on Valentine's day.
J

I like it...not just cause I'm female (I'm not into pink) but because of what it represents. I have had cancer twice (luckily not breast cancer) so any cancer funding is good. 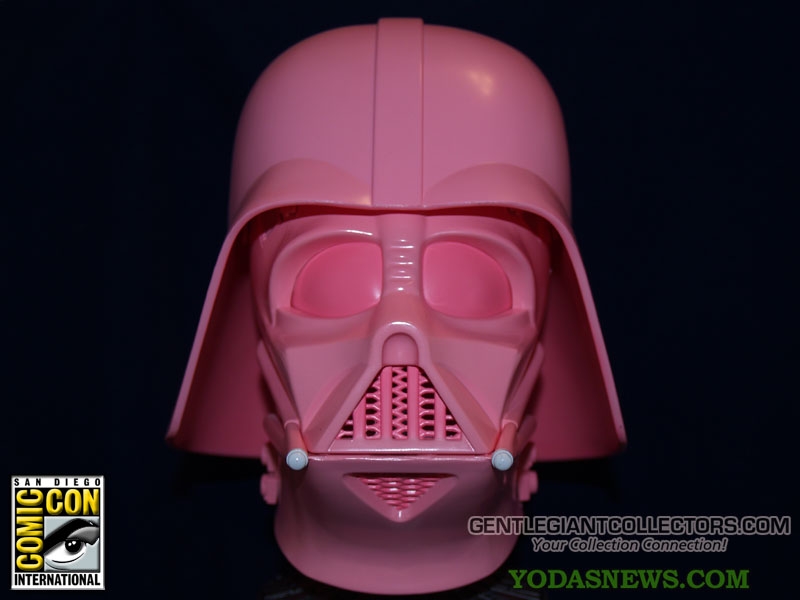 Nothing too exciting in my opinion but it's a nice gesture if a good chunk of the money is going to a charity....no way to ever truly tell how much is going to the designated charity on something like this.

I still can't get over the fact that they have shown this line for a year or more now and still not even one regular release.
M

Can someone post some pics of this item next to other items for scale? I'm trying to decide if I want to go after it or not...
M

I have been a fan of the .45 scaled helmets for quite a while now. It first started when I learned about the Riddell helmets. I managed to get the 3 stage Darth Vader helmet off ebay years ago for a good price. I was hooked but didn't have the money commanded by the other Riddell helmets. So I was thrilled when MR got the license for these. I ended up getting them all, even the lackluster electronic helmets.

It was with mixed emotions that I learned GG aquired the rights to these. Good because I know GG can have top notch quality, bad because of their love of hard to get exclusives. After whas seemls like about a year and half of teasing, I now have my first GG mini helmet in hand. Lets see how it stacks up on its own and with what as come before it.

All rating out of a possible 4 stars.

This still follows that standard 30 Anniversary design we have seen for a whlie in higher end collectibles. That is to say it is rather spartan and looks somewhat boring. There is a write-up on back about the Susan G Kolmen Foundations and it has a sticker on the front of a pink ribbon. The packaging and insert are very similar to the MR style packaging with one big different. The window on the box is actually covered and not open to the inside like the MR packages of old. This should help reduce the "crinkling" seen on the MR packages.

The Vader helmet looks like the Riddle/MR version in terms of sculpt. One can see under the dome of the helmet the various vents and circuitry. The back of the neck piece is done very well. The grebbles on the neck brace seem to have metal parts on them as well. The only thing I don't like - which is true of the Riddle version - is the straight brow. It has always looked wrong to me. I would rather see it some to more of a point than a straight cut across. You can also see the bottom is completely filled in expect for a hole for the ball socket of the stand.

This is the love it or hate it of this helmet. All parts are molded in the approprate pink plastic. Even the lenses are a slightly darker shade of pink. Everything is pink, the grill, the vents, the neck brace bit, everything. What is odd, is that the tusks are white and really stand out and don't seem to fit. The pink is very Pepto in color and I think it is a bit matte. While not quite a super obnoxious shade, it definitely stands out - which is what I guess this is suppose to do. I do wonder if it would look better if the lenses were black. While the color is consistent and while it is not super garish in hand, I have to say I don't like it.

I am counting the stand here. First the positive, it is well sculpted and painted. Thats about all thats good with it. The bad, it is very light and cheap feeling. I would have expected the stand to have a little heft to keep things standing. While the helmet is in no danger of tipping, the stand feels uber cheap. Also this style stand really doesn't gel well with the existing Riddell and MR stands. At least all three stands are interchangable. I also think all the detail on the stand tends to detract from the helmet, which is suppose to be the focus of the item. No sir, I do not like it.

These are the same issues I had with the MR helmet. First the helmet is again one piece so and opportunity is again lost for another 3 piece helmet. There is a little weight and heft due to the metal bits on the neck brace, but the rest feels hollow, light and cheap. It is on par with the MR electronic helmets, but not with the fully detailed helmets. This was somewhat expected going in, but I don't have to like it.

This cost $60 (with 10% going to the Susan G Komen Foundation). Overall the price is too high for the quality of what you are getting. I understand a protion goes to a good cause and that part of it is that it is an exclusive, it is just a slightly overpriced exclusive. I don't recall what the edition size is on tihs, but I would expect them to eventually go for less than $60.

First of all, I applaude GG for putting out a product where proceeds go to a good cause. I think it is very important to support things like breast cancer research. That said - while I may feel a little guilty - I can not recommend this item. Sure it is a conversation piece, but if you wanted to donate to a good cause, skip the helmet just give $60 to the Foundation.

I got this largely because I am a completionist. I also have the bling bling gold Vader helmet on order from GG. While the three Vader helmets (gold, pink, MR black) might look somewhat interesting together in a "Vader Project" kind of way, this doesn't wow me the way I thought it would. I've seen some good Star Wars tie in with cancer research promotions (SW Chicks pins). This is more gaudy that stuff like that.

Again, I am in no way blasting the cause, it is a great one. Just wish the promo item would have been just a little bit better.

If you are on the fence, I'd hazard a pass. Donate to charity instead.

The following are comparison shots with other SW collectibles to give and idea of scale on the helmet.

I picked one up. Every year at work there is a cancer benefit raffle and this will be my donation.