That's the real kicker, all that reuse for so much more than a basic new figure makes it hard to justify IMO. So is that $5 increase meant to cover the cost different in new parts?

Pre-ordered him at lunch yesterday but decided to cancel today, so might be another available since they sold out pretty quick.

This was the only one I was willing to get regardless the price, but it's also the only one sold out on EBGames.
D

Nighthawk said:
This was the only one I was willing to get regardless the price, but it's also the only one sold out on EBGames.
Click to expand...

Still up for pre-order at Dorkside. I've have pretty good luck with them. Pre-Order Estimated Arrival May 2021 DARTH MAUL (SITH APPRENTICE): Darth Sidious’ apprentice and enforcer, Darth Maul, has cut his way through the ranks of the galactic crime syndicate Black Sun to take on the pinnacle of their organization LUCASFILM 50TH ANNIVERSARY FIGURE: Commemorate the...

I don't order from the US cause it's too cost prohibitive.

I just ordered it from shopDisney. It looks to be in stock. Hopefully it ships soon. 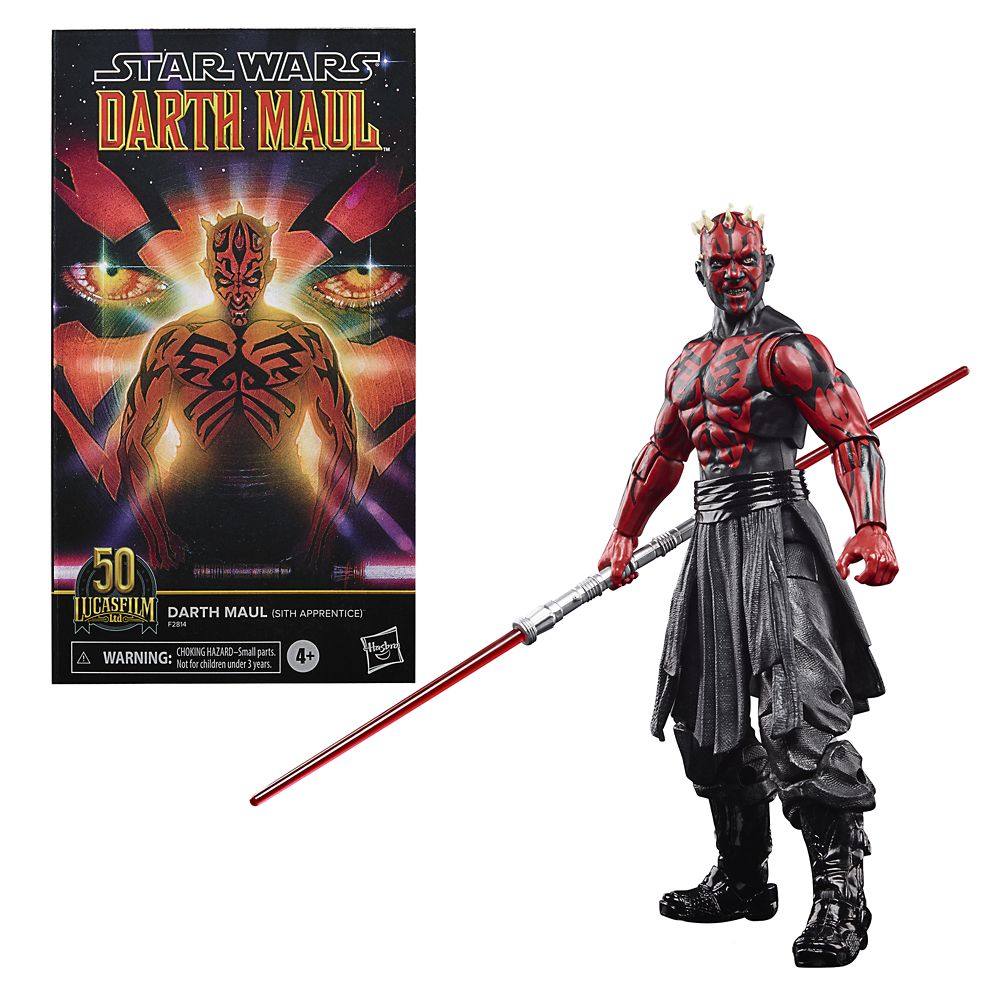 Darth Sidious’ apprentice and enforcer, Darth Maul, has cut his way through the ranks of the galactic crime syndicate Black Sun to take on the pinnacle of their organization. Star Wars fans and collectors can display this Lucasfilm 50th Anniversary highly poseable, fully articulated figure...

Robo has his review up along with Kir Kanos
Face on this is awesome!

I'm getting mine a 3rd party soft goods robe for those chilly nights.

TK_171 said:
Robo has his review up along with Kir Kanos
Face on this is awesome!

Glorious!! Just ordered him the other day. I think it would have been pretty cool if in TPM, Maul ripped off his upper tunic all Berserker-style to reveal all those tatts. The audience may very well have gone Apesh*t, lol.

As for the figure, definitely going to replace those hands because they look weird.
N

This was the only one I wanted but missed the pre-order. I actually found it at TRU today. They had the 'Canor Jax' too but I passed. I really like how this Maul looks. Gave him a soft goods cloak just for fun. 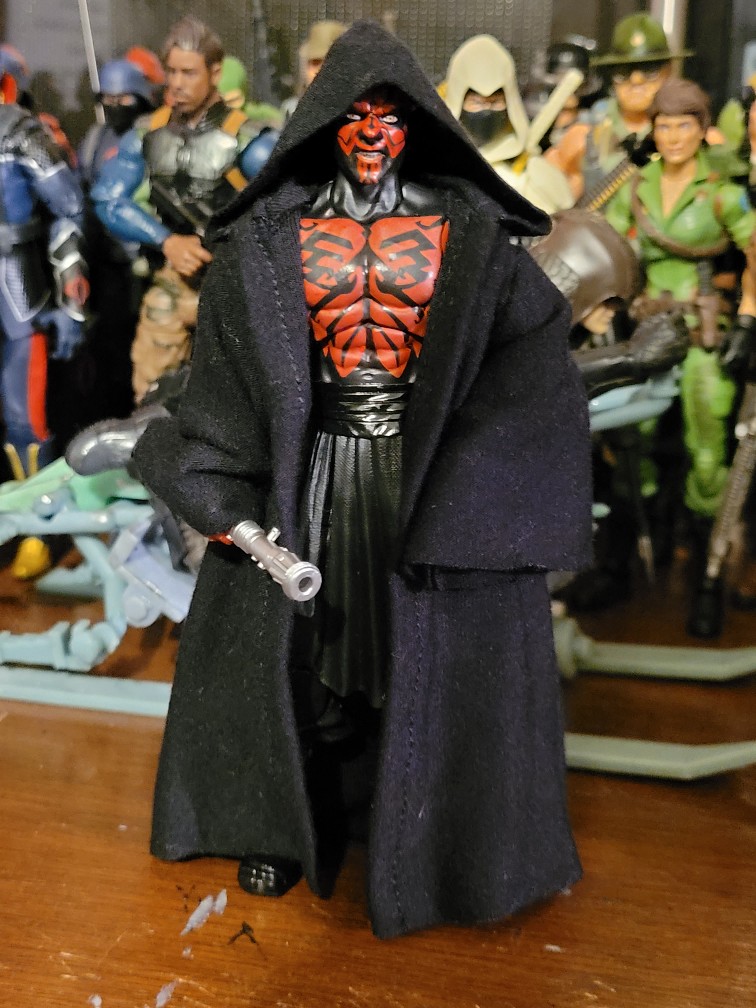 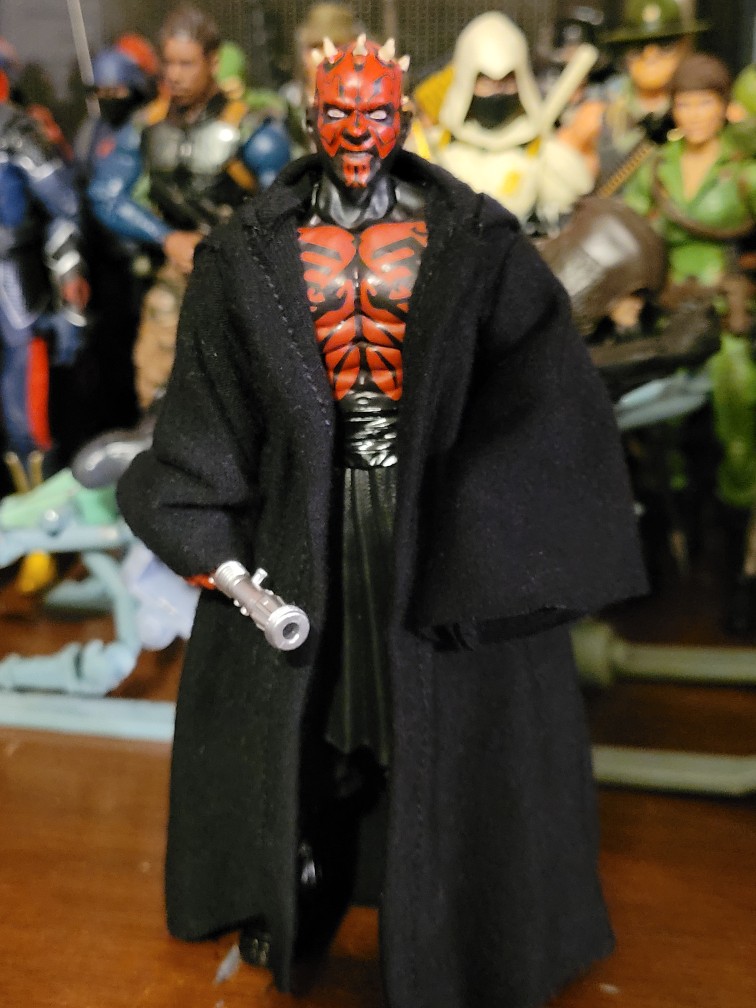 Looks cool! It would have been nice if Hasbro included one considering the prices of these repaints.
Honestly it's starting to feel like they're trying to get by with the bare minimum anymore, which is sad when you look as Marvel and all the accessories included. Never was it more prevalent when I was setting up my display after finally getting one and finding out that the bulk of TBS figures are pretty darn difficult to pose and "stay there", let alone have a "unique" look to them because they all have the same fist shape. It would be nice if we could get alternate hands for some of these characters like Obi-Wan's signature salute, or Ahsoka's etc. But no, they're all the same limiting how you can pose them.

Expanding further on this and why I dislike pinned knees, I can't ever get them to pose the way I want them to unlike TVC figures which have actual useful knees. IDK guess I was just very underwhelmed by them overall compared to what I can get a TVC figure to do.

Got him today along with Jaxxon. Keeping both of em mint in box as I love that packaging but he looks awesome!

My Dorkside order shipped today. Fingers crossed the paint apps on the face are not all jacked up.

Has anyone tried a headswap with TPM Maul? Mine's been shipped but I can't wait anymore, lol.

sharky said:
My Dorkside order shipped today. Fingers crossed the paint apps on the face are not all jacked up.

Gotta say the paint apps on mine are absolutely perfect! Even the rotten teeth look great

Ok, forget what I asked about the headswap; got mine today in the mail! Awesome figure, and awesome paint job!! The only thing that frustrates me with this figure, as with most other Lightsaber wielding characters is why they don't consistently give them forward tilting wrists. They did it for TPM Maul, Dooku and both Ahsokas, but no one else. Someone needs to get it across to them that this is the best joint for Saber wield characters.

I usually don't get a lot of play time with toys I buy, but I had to take time to open this Darth Maul figure. Really super pleased with it. It just looks fantastic! So menacing looking. So bad ***! I kind of wish this was his look in TPM.

Getting this guy tomorrow
Sucks donkey though that if one wants him accurate, one has to paint the hands and they do seem to look very bare as is.

I’m still waiting on this guy by from Pulse. I should have ordered from Disney Shop when he was in stock. Ah well. I’ll be excited when he arrives. Bring on a Clone Wars Maul in 6” please!
A

Got him yesterday, I cancelled my pre order but, very much regretted it seeing the pictures of him and of course, then sold out nearly everywhere. One left in my local comic store, and my first visit in a year and a half.., I had to!

Such a superb figure, he's close enough for me to his look in Rebels season 2 finale twilight of the apprentice, sure the legs are wrong, he's missing the bandoleer..thing, not thin enough, and the saber's wrong, but still, I don't expect a Rebels version anytime soon (Clone Wars.., maybe) and its so great to house such a good Maul with Thrawn and the Rebels crew. Not paying £25+ for the others.., but, I'm more tempted to hunt for a few of them though

At least VAT/Tax is cheaper through DPD than our national system.... but oh man...

Back in stock (low) at Disney Shop. Free shipping thru tonight...

Darth Sidious’ apprentice and enforcer, Darth Maul, has cut his way through the ranks of the galactic crime syndicate Black Sun to take on the pinnacle of their organization. Star Wars fans and collectors can display this Lucasfilm 50th Anniversary highly poseable, fully articulated figure...

It still says "low stock", but the buy button is greyed out with "sold out"

Very nice figure, apart from the missing paint and mine's got some very loose feet ...

Mine just showed up from the Disney shop restock. I gotta say, I’ve never been a packaging guy but I LOVE the packaging on these. If all the BS came packed like these I would actually save the boxes. As for the figure it’s great in hand. I wish the hands went up/down instead of in/out and like Oofa said the feet are kinda loose but it’s awesome overall.

I keep thinking how much more epic the final fight between Maul, Qui-Gon, and Obi-Wan would have been if Maul took his outer robe off and he was shirtless like the figure while igniting his double lightsaber.
G 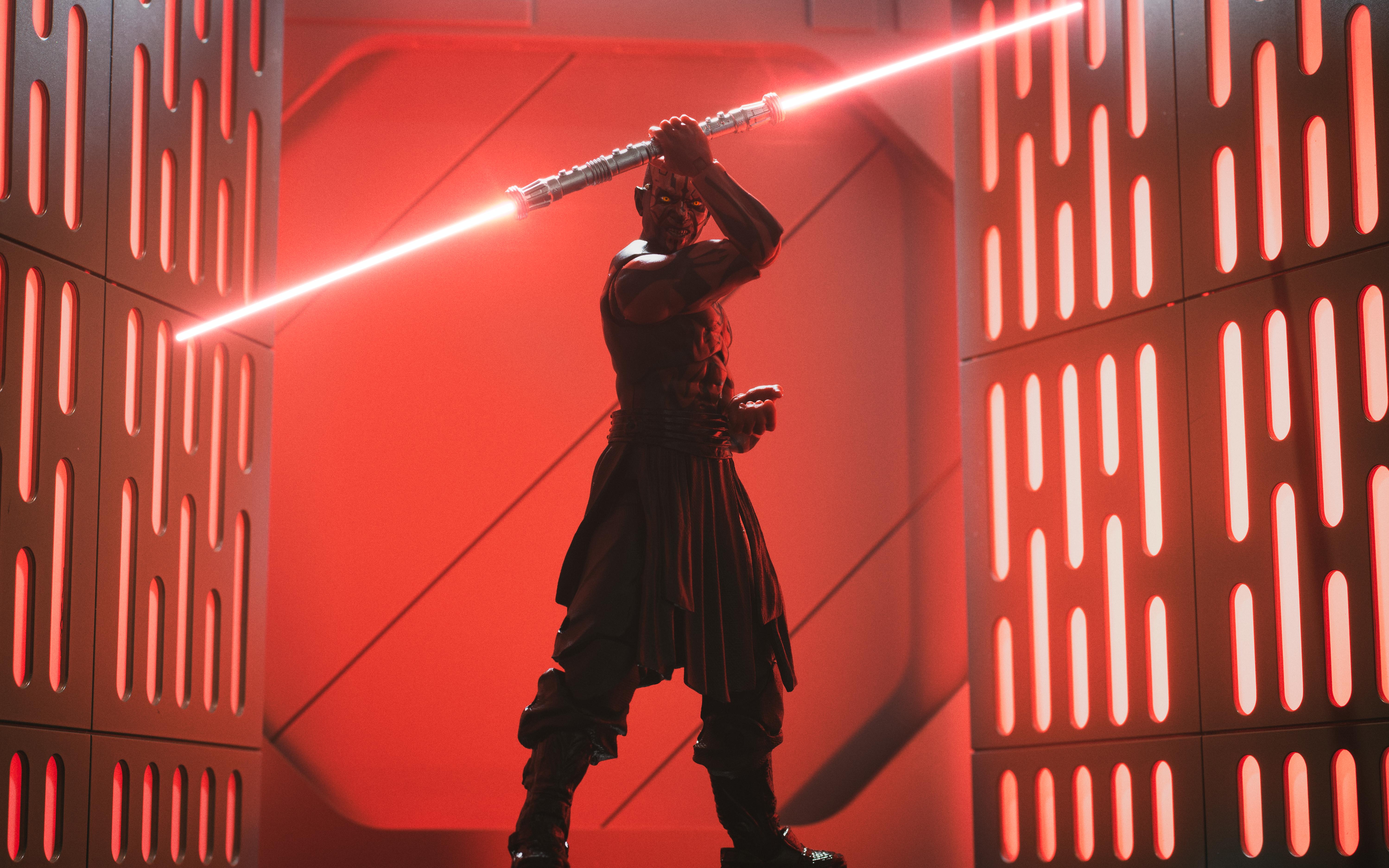